Baywatch is an American action drama series about the Los Angeles County Lifeguards who patrol the beaches of Los Angeles County, California, starring David Hasselhoff. The show was canceled after its first season on NBC, but survived and later became one of the most watched television shows in the world. The show ran in its original title and format from 1989 to 1999, except for the 1990–1991 season, during which it was not in production. From 1999 to 2001, with a setting change and large cast overhaul, it was known as Baywatch Hawaii. The show starred David Hasselhoff, of Knight Rider fame, as Mitch Buchannon, who was the only mainstay on the show, besides Michael Newman, for 10 of the 11 seasons. Baywatch revolved around the work of a team of lifeguards and their interpersonal relationships, with plots usually centering on dangers related to beach and other activities pertinent to the California (later Hawaii) beach lifestyle. Everything from earthquakes and shark attacks to serial killers and even nuclear bombs served as plot conflicts on the show. Saving people from drowning tended to be one of the most typical situations used in the shows. Thus a trademark of the show was slow motion shots of the lifeguards running, most notably done by Erika Eleniak, Pamela Anderson, Yasmine Bleeth, Alexandra Paul, and David Charvet along with Hasselhoff during the height of the show. Each show would feature one or two montages, often only superficially related to the plot. 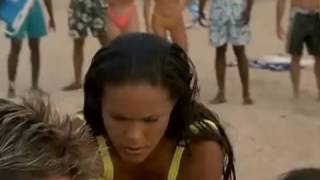