Welcome to Tromaville High Where the students are getting brighter-literally!
By Troma4life
On
Welcome to the article of Reading, Writing, and Radiation. Class of Nuke' Em high was a follow up to Troma's classic "The Toxic Avenger. It was a very successful film, and at one point Troma's highest selling movie. Lloyd Kaufman written the film with a group of people, and also directed under the name Samuel Weil co-directed with Richard W. Haines. The movie almost put Troma into mainstream success, but after two unsuccessful sequels Troma went back under a rock. 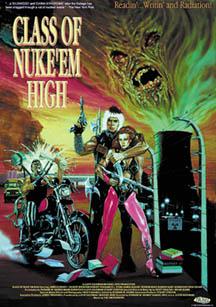 Class of Nuke' Em High has a simple but creative plot.
When a Nuclear Power Plant suddenly gets a leak, it leaks a mile away to Tromaville High. The Main characters Warren and Crissy who suspect something is going horribly when all the "Clean, Cut preppies" and "Members of the Honor Society" are being turned into "Cretinsâ€. But the Power Plant denies ever allegation. 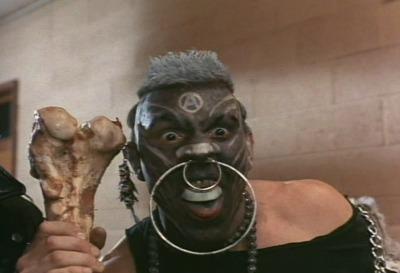 The Cretins are people, if you want to call them that, which don't follow the rules and run amok through the school, and sell toxic contaminated weed to nerdy and horny teenagers. Then to add a little more of the old fashioned monster movie, Warren and Crissy have sex for the first time, Crissy gives birth to a man eating fetus. Pretty Cool. The movie does has good memories for me, being the first Troma film I ever seen, it's pretty important to me in my movie catalog brain. The big scene at the end, The Cretins try to take over the school and kill Crissy, when Warren gets them kicked out. But the Man eating Fetus grows to about the size of a gorilla and kills off the cretins, best kill is when the fetus' tail goes through the one of the cretin's head it's a hilarious effect. But when the head of the nuclear power plant comes down to investigate, he goes into the school building and it blows up. It's the same guy who played the mayor in "The Toxic Avenger"


So with my chart on how i rate films, ill give a score to Troma's classic "Class of Nuke Em High"

The Sequal to the Troma hit, a film not about high school, This time in College!. 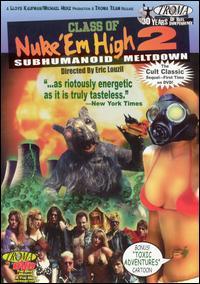 The Class of Nuke' Em High is back,and this time they're in college! Tromaville's nuclear factory has been re-modeled and rebuilt and now includes the Tromaville institute of technology (T.I.T)The Tromaville tech is where Professor Holt has perfexcted the formula for Sub-huminoids which are basically human beings without emotions, who are programmd to do bad things. When the reporter of the school's newspaper Roger Smith meets a beautiful subhumanoid named Victoria, they immediatlet fall for each other. 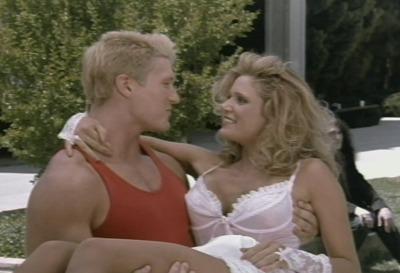 What makes her character cool is she has a mouth where her belly button should be,funny stuff.But the bad thing about the sub-humanoids is they have a tendency to go into spontaneous meltdown, which they basically melt down to these critter looking things. 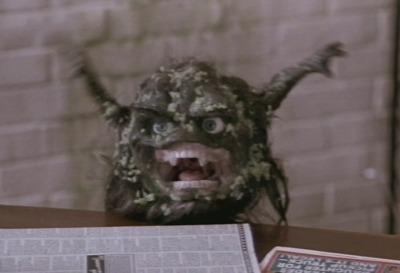 Roger is strongly determined to save Victoria from the meltdown, But first Roger has to face the giant mutant squirrel, named Tromie, who attacks the Tromaville by crushing it and peeing on it, in an explosive climax. 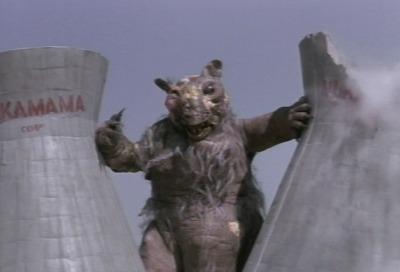 
Class of Nuke' Em High 3: The Good, The Bad, The Subhumanoid.

The last of the Class of Nuke' Em High franchise, and i must sadly say the series dosent go out with a bang. Lloyd Kaufman said that he wished he was around more during the directing of 2 and 3, but you cant always get what you want.


The Film starts moments after the previous film, the mutant squirrel Tromie is subdued and life in Tromaville is normal. Roger Smith is happily married and with the birth of his twin sons, Dick and Adlai. But something horrible happens, Dick is kidnapped at the hospital and
subsequently raised to be evil by the thugs who had taken him. Adlai is being raised by Roger to be kind and happy. Trouble comes in form of the loathseme of Dr. Slag, Ph. D., who uses Dick to frame Adlai for crime he didnt commit in the hopes of turning the citizens of Tromaville against him. If his stupid plot works, Slag will turn the town into a toxie wasteland; with destruction coming, it's up to Adlai to save Tromaville.

I saw this film, thinking it was going to be like 1 and 2
i was wrong....Dead Wrong

See what i mean the film isnt really that good, even for Troma this is surely a dissapointment.

Lets go to that chart


See everyone next article, hope you enjoyed this one.


Have a very Troma Day! :)
10
Login To Vote!
More Articles From Troma4life

11
Quote O' Matic
Gordon: "He gave us a signal"
Batman

11
JSwiftX
TROMA Movies!
A Tribute To The B-Movie Empire
An unhandled error has occurred. Reload Dismiss