The Trash Can: Volume 1

Looking back on the forgotten
By Troma4life
On
Hello Everyone, back yet again with an experiment of mine. This the first of installment of what i hope to be a long series of the forgotten. The Trash Can includes anything from movies, games,comic books, toys or anything else i can think of. Most of the time the reason "it's forgotten" because it was terrible or sometimes it's actually something that should be re-discovered. Well lets pull off the trash can lid and see what's inside.

Okay let's see the first thing we pulled out of the trash can...hmm a little bit slimy and it's got crud all over(Wiping the crap off) Well this is no surprise to be in the can.Drum Roll please! 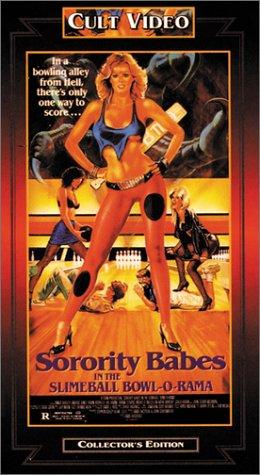 Well,well,well this little crap jem from 1988, Sorority Babes in the Silmeball Bowl-O-Rama is a very complex film,yeah right. The film is about Three frat boys sneak into a sorority to see the initiation of new pledges and are caught. The pledges must go to the local bowling lane and steal a trophy, aided by the unwanted frat boys. An accident causes the trophy to break, releasing an evil imp who then begins wreaking havoc with the teens, who begin suffering an attrition problem....Yup this what i call cheese in a can. The movie stars B-movie goddess Linnea Quigley who has dazzled us in many films where she appears naked in almost every role she has done(What you thought she dazzled us with her acting?)Most people have not seen this film until it got a run on the much beloved "USA Up All Night". It has allot of memorable scenes...most of them involved girls getting spanked with a paddle.

Does this film actually belong in the trash can or should this B-movie be rediscovered? ...Yes and No. It is a good time killer but i would'nt go bragging around with your friends you got a copy on DVD.

Alright, next trash can item. This one looks like it has been through hell, looks like a power tool had done some damage to it. 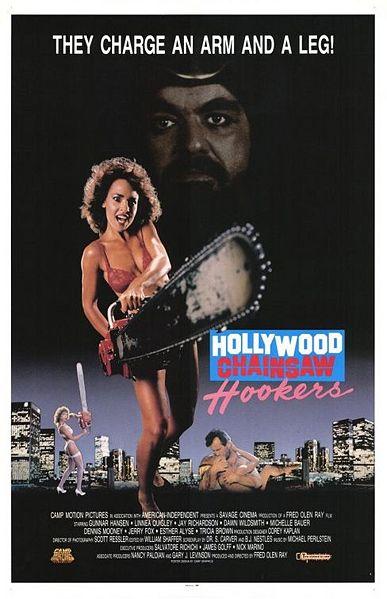 This is basically what horror nerds cream in the pants over. Lots of naked woman and lots of blood, it's a very simple formula that is hard to mess up.A double dosage of Linnea Quigley today she also appears in this film, and yes naked. Her famous Virgin Dance of the Double Chainsaws is surely something to see.The film also has an appearance from the original Leatherface himself Gunner Hanson which is awesome. okay... i guess you wanna hear a plot line...okay here...we...go...Jack Chandler is a private detective tracking down Samantha, the runaway. In his travels, he comes across a gang of chainsaw weilding prostitutes that like to carve people up for their cult.
in other words it's really cool.

Should this film stay in the grimy trash can or should this sleaze fest stay alive...hmm...STAY ALIVE! 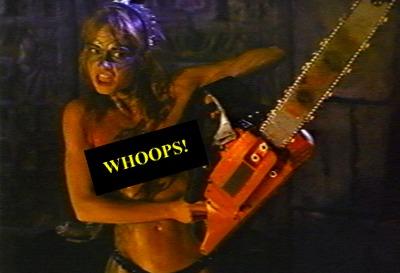 We have one more film in the trash can ladies and gentlemen...well this is a slasher film that has been in the trash can for quite some time now, let me wipe off the blood...ah yes, one of favorites.

This is one of the many slasher films of the 1980's that just got lost within the fame of "Friday the 13th", "Hellraiser" and "A Nightmare on Elm Street". By no means is this film as great as Friday the 13th or A Nightmare on Elm Street. The film has no actors worth mentioning because their a bunch of nobodies. Okay lets get started, The film has a generic slasher film plot. A nerdy kid by the name Marty Rantzen who gets picked on allot, one prank involving him naked and electro-shocks and getting a swirly. But the one to takes the cake is Marty kindly receives a joint(Marijuana) as a present from on the people who picks on him, not so smart. During Marty's science experiment one of the jocks messes with his chemicals and puts something a little extra in the joint and Marty gets burned badly causing disfigurement. 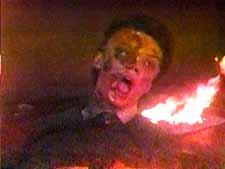 See what happens when your on dope.
Then the Eight people are invited to their 10-year high school reunion at their now-abandoned high school are put through the revenge of Marty.
The reason i like the killer in this movie is because of the mask he wore, It was an old jester mask that freaked me out when i was little. The reason the film is different from most slasher films is the ending. First you think that The Killer, who is in fact marty, kills everyone in sight. but suddenly is being chased by the zombie versions of the people he killed. Then Marty wakes up in the hospital all bandaged up,kills the nurse puts on her dress and stabs the doctor with the syringe and begins pulling a chunk of flesh off his face. I like it. Well if you cant tell by the way im talking about the film i do recommend it for hardcore slasher fans but if your not really into them then i'll just say pass.
7 out of 10
Well Let's See What's Next hmm... a rather odd video game, lets play. 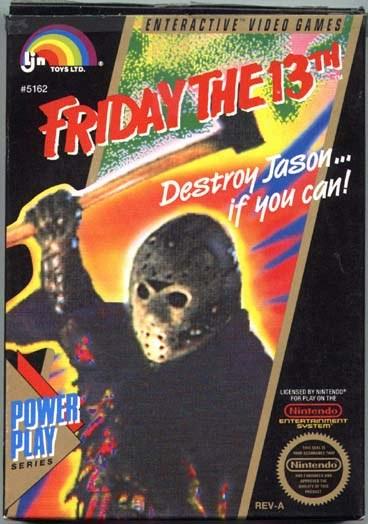 Yup their was a video game based of the film series. What do you do with horror movie series that everyone loves, this was before the release of part five, you put out a video game for the kiddies to play...bad idea. The premise of the game is your a camp counselor and you go around the camp and pick up lighters and throw rocks at zombies? wtf? yup you heard me. The game was hard because the map didn't sync with where the hell you were actually going, if you were walking left, the map would show you walking right. And the rocks most of the time you throw at the zombies, yeah the zombies from the movies, you remember dont ya? the walking dead in the slasher series? no? ..well okay. Your ammo would just fly over them not even hitting them, so you had to crouch down and then hit them with the rocks. Don't get me started on the cabins, going through the them was like a damn maze. You went up, turned and kept going up then... boom a wall. So you had to find the cabin with the right fireplace to light a fire for god knows what. Only thing from the film series was it was at a camp and Jason Voorhees does appear...with blue skin and mask. 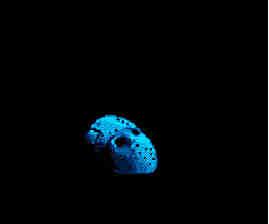 This item should definitely stay in the freakin trash can,long frustrating hours spent on this game. I'm lucky i didn't knife myself

Next item in the trash can, hmm this isnt a movie or video game, well it's a toy. Not just any toy it's.... 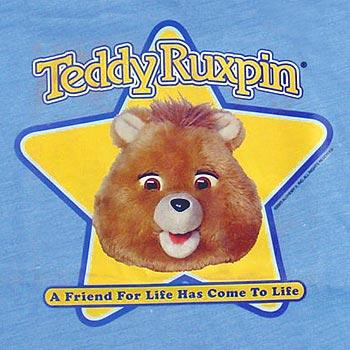 So my parents want to know why i was scared of toy bears from ages 5-10 well hears your damn answer.
Teddy Ruxpin was a toy that i loved and hated. Loved because it was cute and cuddily for 6 year old. But lives inside that damn doll is pure evil i tell you...evil!. The whole big thing about teddy ruxpin was it told you stories with animatronic, a built in tape deck basically. But for some reason the one i had would just tell stories randomly at night time when i'm trying to sleep. Scared me crapless one time when my dad couldn't find the toy and it was telling it's story, it was under my bed. Then i grabbed the Teddy ran down stairs, outside and jammed him down the trash can, and here i am today telling you about it. Well lets just jam it back down in the trash can for now.

Well, Well,Well, our last thing in the trash can for today...What could it be? It's a vinyl record or some
heavy metal band, i think. 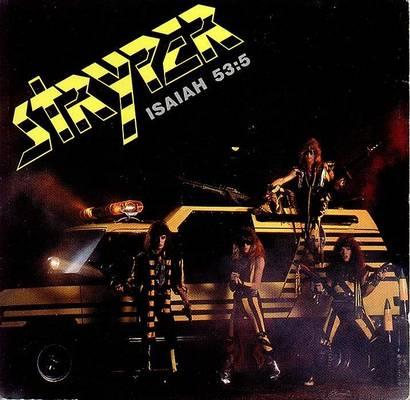 I love all music,including the 80's heavy metal scene. I wouldn't really call this heavy metal to today's standards but i know some people who actually enjoy this band so I'm gonna bash them. But here's a question for ya? when does Heavy Metal and Christian Music ever come together? Never! I mean christian music is fine i guess, but don't every ruin head banging and change to Prayer banging. Don't mess up a good thing like that. But For some reason Stryper was somewhat popular, i guess Jesus wins after all. but Stryper did crash and burn.

Does this belong in the trash can? yes for about a year, then take a listen and put it back. give it a once a year listen to, if you like them...i wont tell

Remember this, Just Because it;s forgotten doesn't mean it should be,or maybe it should.. i gotta work on a better slogan.
33
Login To Vote!
More Articles From Troma4life 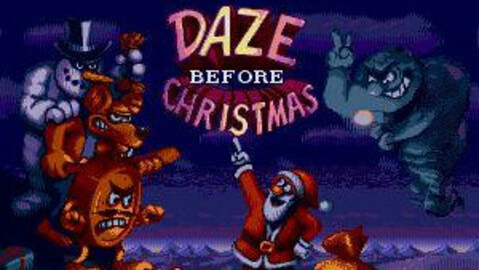 20
Troma4life
Obscure Gaming Volume 1
All the games you didn't play.

10
Captain_Retrograde
My Custom-Made Saturday Morning Block
In which I wax nostalgic while presenting my source of retro-relief.
An unhandled error has occurred. Reload Dismiss