Go To Camp With John Candy

An in depth look into Camp Candy and the wonder it holds.
By Vertex
On

Camp Candy came on TV right before Captain N: The Game Master on Saturday morning and followed the adventures of six environmentally aware kids as they try to enjoy summer camp and foil the evil deeds of Rex Deforest the 3rd. Camp Candy aired from 1989 to 1991 and was supposedly inspired by John Candy's actual experiences as a camp counselor. In addition to voicing the main character, John Candy served as executive producer on the show and added live segments to the beginning of the show, where he would talk about such hard hitting things as how to keep the environment clean, and the evils of littering.

John Candy
John Candy played himself as the camp's counselor, and all around dufus, and klutz. He always seemed to screw things up more than ever helping the situation. In spite of this, he always managed to pull things out in the end.

Rex DeForest III
Rex is the evil villian and will not stop until his grand scheme of shutting Camp Candy down and to clear the forest for his planned condos is complete. He loves things like dumping oil in the rivers, and smashing flowers.

Nurse Molly
Nurse Molly, is of course the camps nurse, and serves as a mother figure at the camp. She was not in the episode I have, so I could only get this crappy picture.

Binki
Binki is the youngest of the group, and often feels left out because he is so little. He makes up for this in cuteness and just darned hugability.

Vanessa is the vane one. She is always worried about her hair, and what people think of her. In other words she is the resident bitch at the camp.

Iggy is the nerd, he is not very brave but his smarts pull hin through in the long ran.

Robin
Robin is the strong willed one, who fights for what she believes in and tries to right any wrongs she encounters.

Alex
Alex is the cool, athletic one. If he was one of the characters on Saved By The Bell, he would be Zack for sure.

The fine cartoon we will be taking a look at now is entitled Bird Is the Word, which aired in Camp Candy's first season. We begin the episode with a live action scene from John Candy in which he looks disgusted that he even has to be there, let alone having to talk to kids about how nature recycles. After John Candy tells all the boys and girls to wait until the end of the cartoon to find out how nature recycles, we fade to black and the cartoon starts.

Now I have not done a whole lot of cartoon watching lately, but these new fangled cartoons nowadays have nothing near as cool as a major celebrity coming on and talking to YOU. Not to mention that he was also the voice of the lead character. Maybe it is the fact that stars are more tight assed nowadays, and are more conscious of their reputation. Or maybe John thought that nobody would really pay any attention to a kids cartoon, and he could make some extra cash without hurting his career. I would like to believe he just loved kids and wanted a way to teach them good lessons while entertaining them… But I have my doubts.

The story starts with little Binki doing his best to water the vegetables, but somehow manages to get the hose wrapped around one of the legs on the water tower. Naturally, this builds up the pressure inside the hose and snaps the water tower leg like a twig. This causes the water tower to come tumbling down, creating a huge tsunami.

With the camp drenched, and completely trashed, nobody is very pleased with Binki. A frustrated Vanessa, then tells Binki that he should stop trying to help, and that he is just too small. She has a point but this happens to upset Binki quit a bit and he mopes out of the room. Robin points out what a bitch Vanessa was for what she said and she agrees that maybe she was a bit too hard on the little guy.

Binki, feeling pretty bad does what little whiney brats do when upset, he climbs a tree and does his best to avoid his problems. Wallowing in self pity, Binki wishes for a friend the same size as him. Just then a bird lands beside him and with a handshake Binki declares them best of friends. It seems not to faze Binki, that this stupid bird has the most annoying bird call you could ever emagine.

Robin, being the nosy type, goes out to look for Binki and talk some sense into him. She scares away Binki's new pal, leaving Binki with only a feather to show for it. Robin recognizes the feather and could swear she had seen it before. She pulls out her bird book and wouldn't you know it, it's a twin crested nut warbler. A once thought extinct species of bird. 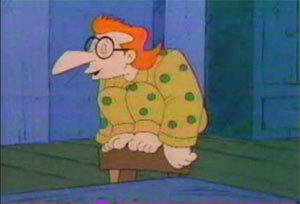 With Binki's new discovery, they decide to call the worlds leading authority on birds, Dr. Morton Flysacker. It just so happens that Mr. Flysacker is quit the asshole and looks an awful lot like a bird himself. He is highly suspicious of the kids' claims and makes it clear that if this is a joke, they are in a lot of trouble. 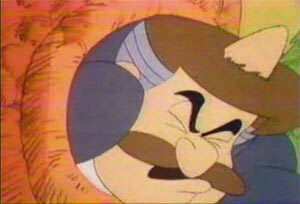 With news of the rare bird reaching Rex DeForest, he and Chester head out to find the annoying bird first, for fear that they will declare Camp Candy a nature preserve, killing his hope of stripping the forest and building his dream condos. After some stereotypical cartoon high jinks and a bump on the head that looks like it just may be a tumor, Rex and Chester capture the bird.

With the Nut Warbler nowhere to be found, the kids dress Binki up as Warbler in hopes of luring the bird back in time to show Dr. Flysacker. The bird shows up just before Dr. Flysacker is ready to call the whole thing a hoax. <PLOT HOLE: It is never explained how the bird escaped from Rex and Chester in order to get back to Binki.> Unfortunately, Rex shows up not too long after, and in the ensuing confusion the warbler fly's away, taking with it Camp Candy's chance to become a nature preserve. As luck would have it though, Binki discovers a whole nest of little warbler chicks in the tree Binki and the warbler first met in. With this Camp Candy's future is assured, everyone has a good laugh at Rex's expense, and everyone lives happily ever after.<PLOT HOLE: How did the twin crested nut warbler reproduce if it was the last one?>

With the cartoon over, we are treated with John's explanation of how nature recycles and how it benefits us all. Now that I am an adult, these segments are far and away the best thing about the cartoon. A lot of people do not even know these exist, and although short are some lost John Candy relics that I think a lot of people would get a kick out of.

Looking back on Camp Candy, it is striking how so little plot can drive a half-hour long cartoon. Things often jumped around, made no sense, or felt like it did not need to be in the cartoon in the first place. You get the feeling when watching it, that it was only an excuse to show people falling down multiple times. I guess it really is a cartoon geared towards younger kids in the 6-9 age range, so you can't really fault it for what it is. I was only 7 during its original airing, which may explain why I have such fond memories of it today.