D.A.R.Y.L - Data Anazyzing Robot Youth Lifeform. We review the movie about the robot boy who could.
By Vertex
On 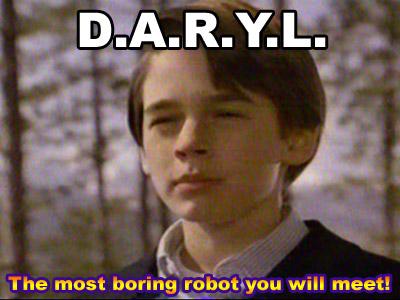 DARYL was released in 1985, at about the time the general public was really starting to take note of computers, and the seemingly impossible and wonderful things they could do. It was also pretty clear in other movies from the time such as War Games. People could already see the potential for computers, and the possibility for them to turn EVIL. Now terminator Daryl is not, the closest he ever seems to get to kicking ass is hitting a ball through a window. The blandest robot you will meet! 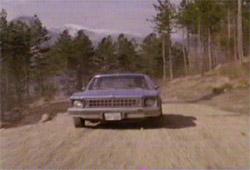 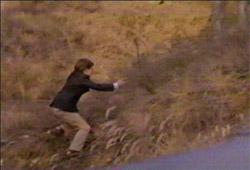 The movie opens as a man in a speeding car makes his way through a winding mountain road with a helicopter in hot pursuit. This mysterious man stops to let a young boy out of the car and continues on his way. The man in the car seeing no way out does the honorable thing and plunges his car over a cliff. 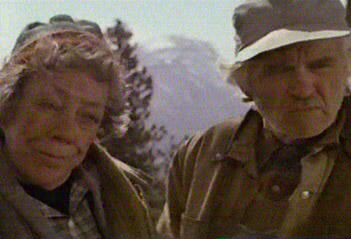 With the help of two elderly people, who I can only guess were in the forest hunting for magic mushrooms, Daryl makes his way into town and into child services. Now I like to think our government has a little competency, and you would also tend to think that they just may be on the lookout for any kids that got picked up that day in that general area. Not to even mention finger prints. But I guess they did not have their act together so well back in 85. 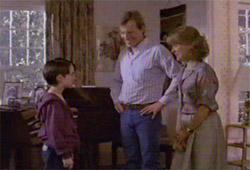 But all of those silly details aside, Daryl is placed into a foster home until his real parents can be found. You see it so happens that he is stricken with amnesia and cannot seem to remember anything from his past. Joyce and Andy happen to be in the market for a kid, and since they think it will help their chances on adopting a better kid in the future, they decide to foster little Daryl until someone comes looking in the lost and found for him.

They never really went into detail on why Andy and Joyce can't just have a kid by making sweet, sweet, love but I get the strong feeling that Andy's little manfish are a bit on the sluggish side. But HEY that's OK, it happens to a lot of guys so I hear.

D.A.R.Y.L. is almost completely void of notable talent except for two very minor exceptions, those being Andy, Daryl's foster parent, and Daryl himself. You may remember Barret Oliver (Daryl) from The Never Ending Story and not much else. Then there is Michael McKean (Daryl's foster father) who apparently brings the star power to the film. Some of his gems include Clue, Best In Show, Coneheads, Clerks, Airheads, and many other small roles. Most of these came after this movie so you may even say D.A.R.Y.L. jump started his career. 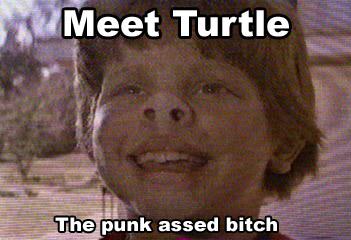 With Daryl's life starting to fall into place, he meets a neighborhood kid by the very clever name of Turtle. The best way to describe Turtle is that he is a punk assed bitch. He is quite fond of the word shit (which I do not remember as a kid, I must have had the TV version of it), calls his older sister a hooker, and admittedly tries to piss of his parents at every chance. They try and put him off as a Dennis the Menace type but I can see right through him. 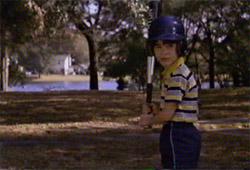 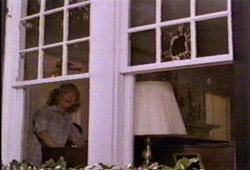 Daryl and Turtle become good friends if not even lovers (they don't really go into that) and begin spending every second with each other. Daryl's foster father also happens to be the coach of the local little league team, and like all good fathers takes it deadly serious. So one of the first things the new father and son do together is go out for batting practice. Since Daryl seems a bit feminine, nobody really expects much from him but Daryl slams the ball across the yard and through the window. Now instead of giving Daryl a spanking for breaking the window like he deserves, he is actually happy, his new little kid just may win him some baseball games.
Life seems grand for the new family. Except that they are beginning to realize that Daryl is special, he is not like the other kids. Daryl does not "seem to need anybody". This apparently bothers his foster mother who desperately needs to feel needed... How needy of her. Turtle, in all of his wisdom gives Daryl some advice only a 40 year old movie script writer could give. He tells Daryl that he is too perfect, and needs to screw up every now and then so his parents feel like they are making progress. Daryl then decides to strike out, and then proceeds to flip out at his foster parents using some pretty foul language for a kids movie. This seems to please them to no end and everybody is happy. 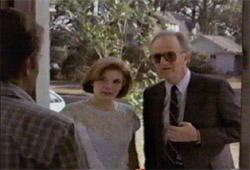 When everything seems to be falling into place they are hit with a shocker. People claiming to be Daryl's real parents come calling. Andy and Joyce have no choice but to give up Daryl. I mean after all they had pictures of him as a baby, how can you dispute that? As the people leave with Daryl, the childless couple comment on how they just did not seem right.

With Daryl in the hands of the two strange new people, he is ushered off on a plain to unknowensville. While on the plain, like all young boys in the 80's he goes up to the cockpit to meet the pilots, and ask a few questions about how the thing works. Now I am sure this will come in handy later seeing as how Daryl is quite the fast learner. 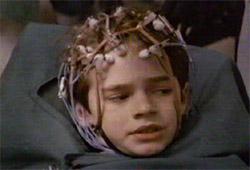 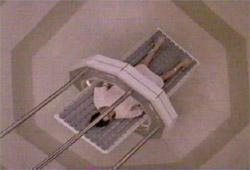 Daryl finds himself in a government facility, where it is revealed that the two people that claimed to be his real parents were in fact doctors Jeffery, and Ellen. Daryl is then subjected to a series of tests to determine how he managed to learn the difference between chocolate ice cream and vanilla ice cream. The doctors begin to see the human in Daryl and start feel sorry for him.

Feeling rather lonely Daryl asks Jeffery if he can see Andy, Joyce, and Turtle, one last time. The doctor, filled with newfound heart agrees. As Andy, Joyce, and Turtle, are ushered through the high security facility they begin to realize something is up. They learn that D.A.R.Y.L. is not all the human they once thought he was. The good doctor then vows he will do everything he can to get the boy back to them.</font></p> 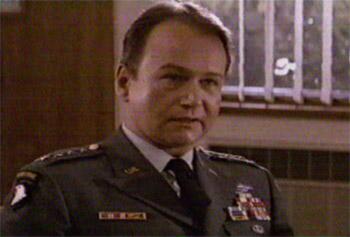 We are then introduced to the real villains of the movie... THE US MILITARY!! They seem to think that the Data Analyzing Robotic Youth Life form is useless, and they want a fully grown one trained in military tactics. I can't really argue that either, really what use would you have for a robot boy? It is then decided by the military big wigs, that Daryl must be destroyed. This displeases the doctors, so Jeffery and Daryl decide to make a break for it. 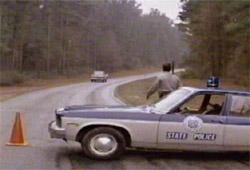 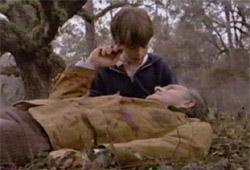 While they are on the lamb, the duo run into a police road block, which after some quick thinking by Daryl, they easily get past. Little do they know, there is yet another road block for some stupid reason, about ten feet further down the road. Now this cop is not gonna have any of this shit, and immediately starts blasting away at the truck. The Doc takes one in the chest and crokes after a heart warming speech about how Daryl should think of himself as a real boy. 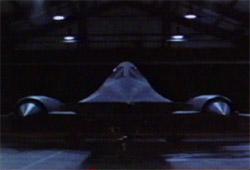 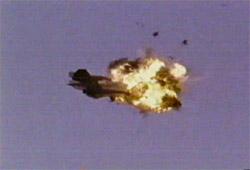 Now that he is all alone, he realizes that he must find a way back to the only family he knows. But how can he get all the way over there? I know! Take a stealth blackbird jet! He finds his way to a nearby airfield, and proceeds to commandeer the jet which seems to be woefully insecure for a military machine of death, and he is on his way. He makes it home only to have his jet explode via the remote self destruction those sneaky military people installed. Luckily he ejects just in time. Unfortunately, his ejection seat plunges into the watery tomb of blue lake. Fortunately Turtle and his hooker sister are on the scene to rescue him but sadly it is to late, Daryl is DEAD. 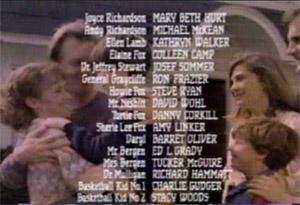 As everyone returns from the hospital, feeling down about the loss of poor little Daryl, Turtle has a revelation. Daryl can't be dead! Death is when the brain stop functioning, and Daryl has a computer chip in his noggin. So they all go back to the hospital and Daryl Wakes up good as new. Everything seems to be fine and they live their life in grand fashion.

Now that I have watched this movie as an adult it really is pretty boring, and I don't really know what I saw in it as a kid. I mean 2/3 of the movie is just Daryl playing baseball or learning how to love... I guess I got a kick out of it as a kid because of the part when he steals the jet. That is the part I remember most from my childhood. He never really does anything else that is very cool with his robot powers, like shoot up a police station, but I guess it was not a completely worthless movie. It sure is one of the better boy-is-a-robot movies such as the craptacular A.I.
9
Login To Vote!
More Articles From Vertex

31
moviebuff18
E.T.: The Everlasting Theme
This about films that were inspired by E.T.
An unhandled error has occurred. Reload Dismiss