She is the one, Sailor Moon!

Nostalgia about the Sailor Moon show and toy line.
By TheDisneyPrince
On
This is my first article on RetroJunk,so please be nice and comment. I'd love to hear some feedback. And yes, I'm a boy and I played with dolls. (no judgement, lol)
I remember in 5th or 6th grade running home from the school-bus to catch my favorite show at the time, Sailor Moon. At that time the beloved mini-skirt heroin was part of CartoonNetwork's "toonami" television block. The consisted of more edgy (usually Japanese animes) shows (Tenshi Muyo, ReBoot, Sailor Moon, Dragonball Z). I can remember making some of my own acts to Sailor Moon with the help of the doll line. 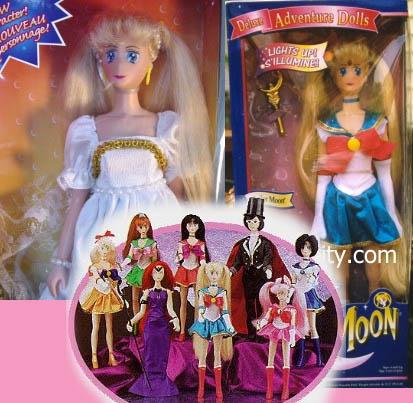 The dolls were made by Bandai America until Irwin Canada picked up the license. The dolls were EXTREMELY homely and rather masculine compared to their anime counterpart. I guess that since anime was so obscure in North America,that this was as close as the could get to replication an anime face on an American doll.There were also three types of the dolls you could buy. There was a 6-inch "Adventure" doll size,12-in fashion doll size and a ridiculous 17-inch mutant size. Although the dolls were extremely unfortunate looking, I still wanted them. So, I could either get them from Blockbuster video, or my local comic book shop. I only ended up getting a couple of these Quasimodo dolls because I couldn't get past their appearance. Although,I do have to give 'props' to the company because along with our pretty soldiers, we also did get a rather impressive line of villains (and villains are allowed to be ugly ^_^). 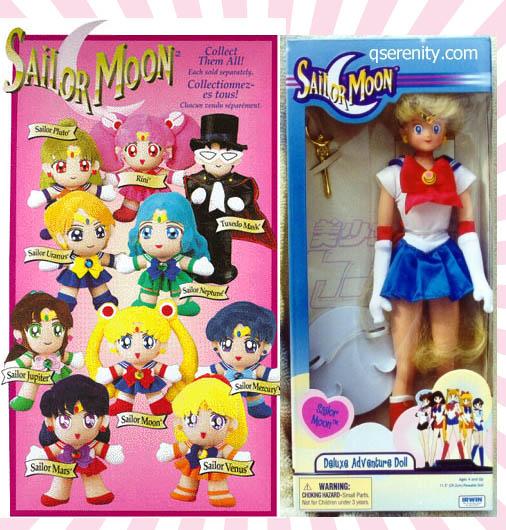 Finally in 1999 Irwin released a updated set of the dolls during the peak of the shows popularity. The dolls consisted of all of the main scouts and Tuxedo mask. The dolls bodies were still a little bit 'man-ish', but the faces were very cute. The new face-molds payed great homage to the anime.The dolls were very popular,so much so that they had a series-2 that followed the dolls. Along with the fashion dolls Irwin also produced a line of plush dolls that mimicked the chibi UFO catcher doll that was popular in japan. 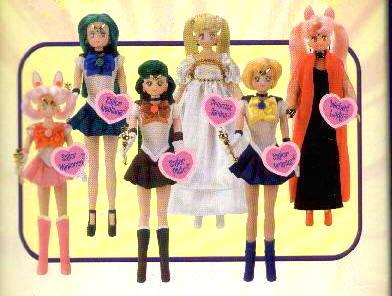 After a few months Irwin decided to release a second wave of the dolls. The Sailor Scouts dolls had more articulation in the arms and they released the 'Outer' guardian dolls (Neptune,Uranus and Pluto) and Rini dolls (as Wicked/Black Lady and Mini Moon). During this time there must have been a decline in the sales because the company did produce a "Super Sailor Moon" doll and a Sailor Saturn doll. They were super limited in quantity and they are now really sought after by collectors.
I really loved my sailor moon toys and still have most of them. They all retain battle scars and frazzled hair, but I still love them. They helped me become more creative in my childhood.
18
Login To Vote!
More Articles From TheDisneyPrince 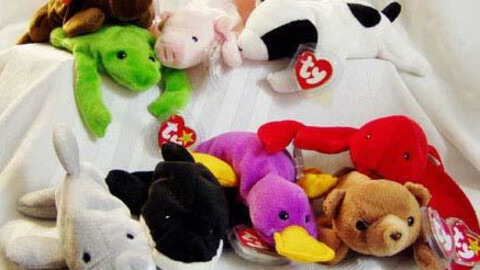 0
rebornterra
sailor moon the final season (ep.167)
this is for the people who have only seen sailor moon dubbed: an articale on the first episode of season 5 23
shiroihikari
Magic of the Moon
I reflect on why Sailor Moon means so much to me. 7
Knites
A Change for the Better
In the superhero world, change is a must. Hence, the transformation sequence!
More Articles
An unhandled error has occurred. Reload Dismiss