Basket Case director Frank Henenlotter explores another bizarre symbiotic human-monster relationship in this surreal horror-comedy about a young man named Brian (Rick Herbst) who emerges from a night of bizarre hallucinations to find a jovial talking slug attached to his body. The creature, a brain-eating parasite called an "Aylmer" (but who prefers the simpler handle "Elmer") came calling after abandoning his former companions Â— a European couple who tried to wean him from human brains by supplying him with sheep brains from the local Butcher. Preferring prey of the bipedal variety (and a younger, more mobile host), Elmer hitches a ride with Brian, administering doses of a highly addictive psychedelic drug to keep him under control, and sends him out in search of human grey-matter. Understandably, this drives a wedge in the relationship between Brian and his girlfriend Barbara (Jennifer Lowry), who doesn't buy the monster story but nevertheless begins to recognize Brian's junkie behavior patterns. Fighting a losing battle against Elmer's magic juice (and trying to keep Elmer from munching down on Barbara's skull), Brian is forced into a hideous showdown for possession of his own mind. Not quite as grotesque as its scenario suggests, this is nevertheless an inspired bit of lunacy Â— though Henenlotter eschews much of the horror possibilities by drawing humor from the outrageousness of the situation, making it less memorable than his darkly-chilling debut feature. Clever highlights include horror host John Zacherle as the Bing Crosby-esque voice of Elmer and a cute cameo from Basket boy Kevin Van Hentenryck. 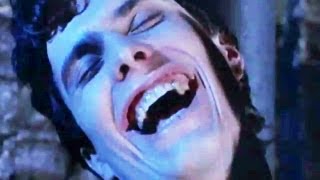