Dr. Nessega shares with us his strange night in the ER.
By NostalgicJester
On
Good morning I am Dr. Nessega. That’s pronounced Nes-sega by the way I don’t mean to be rude but I just hate being called Ness-aga. However that is not important. The reason I am writing this to you is because I wanted to tell you about the night I had in the ER. I know it breaks doctor- patient privileges and violates my Hippocratic Oath but I really don’t care. After last night they could fire me and I would have seen it all. So anyway, let me relay to you the events of last night.

As the storm outside grew stronger I was looking forward to the end of my shift. I had been on for 36 hours and I was ready to go home. Then I received a page from the ER and rushed down to see what was going on. What I saw stopped me fast in my tracks. On the gurney there appeared to be a pancake with eyes. Upon further investigation I found it was actually a crushed mushroom… with eyes. This floored me but I kept my cool and ask the EMS tech what happened. He said they saw it stumble out of a sewer pipe and brought him in. They expected a fractured skull, crushed pelvis, and possible brain damage as he insisted on repeating “jumping plumber” when they asked him how he got his injuries. I thanked the EMS techs and bid them farewell with the promise that I would take over.

I really was only able to get back into the room when I heard a pop and saw the mushroom man return to his normal state. I mean he literally popped back to normal. If normal for him is a mushroom with eyes, a mouth, and…feet. 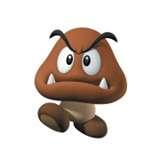 I took him to ICU and took his history. He told me his name was Goompa or Goomba or something like that. He than told me that an Italian plumber jumped on him and that it happens a lot. I asked if he ever thought of wearing a helmet and he said no. He said, “No helmet. My side stepping abilities will prevail.” I found that odd and thought he meant dodging abilities until he asked to go to the bathroom and literally walked side ways all the way to the toilet. It was strange but as I got him stable I received another page and knew that the “strange” was just beginning.

This time I entered the ER and saw a belligerent gorilla that kept pulling the nurses aside and throwing bio-waste drums at the orderlies.

We were able to sedate him and moved him to a gurney where we strapped him down. As he started to come to I asked him his history and what had happened. He told me his name was Donkey Kong. He said he was minding his own business when he came across a girl with an umbrella. He said he was trying to help her cross the street when she got scared and started hit him with her purse and hat. He got confused and grabbed her than started to take her off the street and to the top of that construction site on Maple (I was starting to see a lot of Lenny from Of Mice and Men in this poor ape). He then said that some Italian guy kept jumping up the steel beams and eventually pushed him off causing him to fall 5 stories and land on his head amongst the beams below. I asked him to describe this Italian man and the description was much the same as the mushroom’s.
I treated him for a cracked skull and left him to rest. I had gotten another page and was told that there was a go cart accident. One of those involved was in the ER and they needed me as soon as possible. When I got there I was not all that surprised to see a dinosaur lizard thing laying on the gurney.

I had seen enough already and nothing caught me off guard now. The dinosaur lizard had a broken arm and a deep laceration in his tail. We were able to set is arm and stop the bleeding rather quickly. When asked what happened he told me he was fooling around and racing his buddies on go carts. Then some Italian guy showed up and started throwing turtle shells at everyone. He said one caught his front tire and blew it out which sent him careening into a wall. Yoshi, as I later learned this to be his name, described the man in the same way the monkey and the mushroom did.

I knew that It was time to call the cops and inform them of what was happening. I told them that there was a crazed Italian lunatic going around causing chaos. They told me they had had complaints before about an Italian guy jumping on animals and basically disregarding traffic laws including driving on a busy freeway in a go cart. They faxed me his picture and told me to keep an eye out for him. I am sure he will face charges like: reckless endangerment, animal cruelty, reckless driving, and if it exists, fungus abuse.

This is his picture:

Please be looking for this man because he really should not be doing this stuff any more.

Well I thought my night was over until something even more insane happened. I really must tell you about it some other time as I am tired and need sleep but I will tell you this, it involves a tall fat man with a silly looking mustache entering the hospital with 2nd and 3rd degree burns all over his body yelling about, “That insipid hedgehog!” It was crazy but I will tell you more next time. Until then thanks for reading.