A trip in to yesteryear when Unsiversal Studios was.... you know... fun.
By DieYuppieScum
On
For anyone who has ever been to Universal Studios as a young child they will most likely remember a number of assorted attractions and shows. 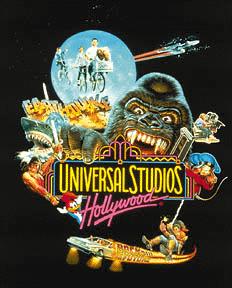 These are the attractions that spawned awe and sometimes fear and most certainly memories for all of us... that is, before the gods of universal decided to destroy the best rides and shows the park had ever created. One by one these incredible rides and shows were replaced or just flat out removed, left to be unused space.. These attractions live on in only two places... our memories... and the internet, and I have taken the time and energy to bring back all these nostolgic shows and attractions for one last ride. 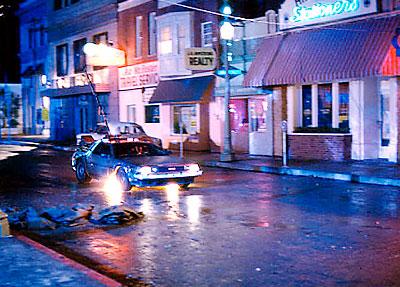 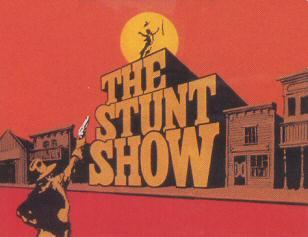 This show had it all for a young rough rider in training, Seemed like there was always some kind of trouble brewin' at the "Silver Slipper" saloon. And when these cowboys started mixing it up, you wanted a ring-side seat. Because these cowboys were some of Hollywood's best stunt men, showing you just how they survive quicksand, shotgun blasts, knife fights, bottles being broken over their heads and breathtaking thirty-foot falls. It was almost as if you were sucked in to an old western flick. 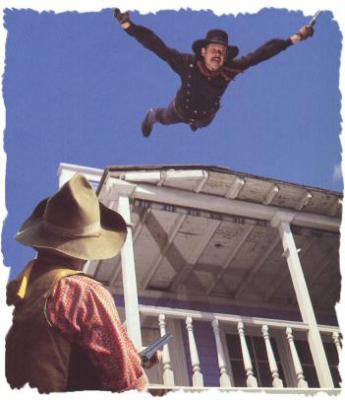 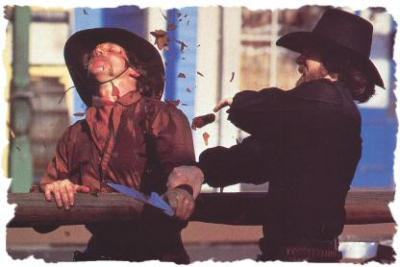 The original Stunt Show at Universal changed very little over the years it was open. It was first set up by a group of three men around 1965, one of whom was actor and stuntman Stephen Smiley Burnette. The early days of the show meant there was no arena to perform in - the stunts were performed in a roped-off area with members of the public standing and watching. The show evolved over the years into a large scale attraction with it's own outdoor venue. 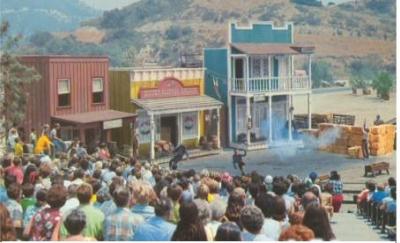 .
can you tell which of these tourist switched to bounce fabric softener?

In January 2002 the Wild Wild West Stunt Show was performed for the last time. The addition of more high-technology thrill rides and theatrical experiences ment the mix of stunts and comedy no longer fitted in at Universal Hollywood. The Arena still stands but it serves of no use to anyone except as storage. The CEO's decided that the arena for a unique if not historical stunt show was better used for holding crap from failed themes like rugrats gone wild. Pathetic.
LADIES AND GENTELMEN BOY AND GOULS... ARE YOU READY FOR THE GHOST WITH THE MOST?
Not that he cares if you are ready or not, male or female, dead or living... but up next on our trip through time is that pin striped polterguiest BEETLEJUICE and his Universal Monsters IN
BEETLEJUICE'S GRAVEYARD REVIEW 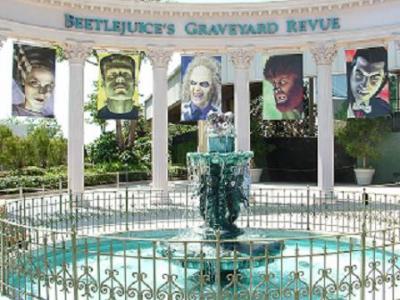 .
This is the part of the Acropolis in Greece no one wants you to see 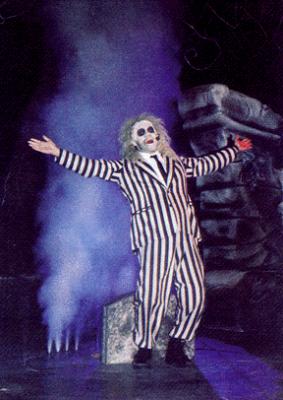 .
Let's turn on the juice and see what shakes loose


This show is still around in Orlando, but not like the original from what I hear. In the original, BeetleJuice starts the show the best way he knows how... popping from his grave a nd being a womanizer and over all his douche bag self to park guests (and we love him for it). BJ then wakes up the legion of Monsters who are frozen for some reason or another(not fully explained) to their frightfuly full living selves... among the roll call is The Prince of Darkness, Count Dracula, Frankenstein's monster, The Bride of Frankenstien, The phantom of the opera, and the Wolf Man. Once these horrific creatures are awaken They then do their typical monster routine.. which frankly is not much and kind of pathetic until BJ urges the crowd to say his name 3 times (shocker) releasing his necromomic undead powers to transform this group of stiff braindead, instinctual monsters... in to a gang of kick ass, full of attitude, smart mouthed, party animals. 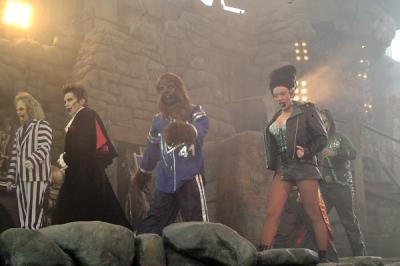 OK OK maybe this show did suck now that I look back at it as an adult... but to a little kid it's awesome... I know I loved it growing up even if it really sucked ass. The oldies, corny, the costumes and the dancing... And the concept of seeing the classic monsters "modernized" 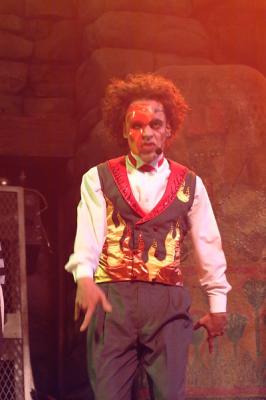 
Frankie Jamming on his Guitar


And BeetleJuice doing what he does best... SHOWTIME 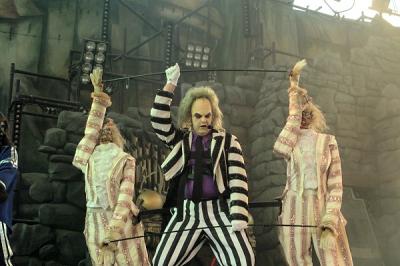 This show was originaly located next to Fivels Playland but moved to the Dark Castle when universal retired the CONAN THE BARBARIAN live action show..... The Castle is now being used for (PUUUKE) FEAR FACTOR LIVE. God Help us all.


Well it looks like our 8 passanger De Lorean's MR.Fusion has run out of trash.... Time to return to 2007 and refuel for another segment of Universal Studios Lost attractions.
10
Login To Vote!
More Articles From DieYuppieScum

-8
nintendonerd
What I think about Movies.PT.1
Some movie studios I hate and love.
-7
Retro4Everybody
Nick GAS:About The Channel
This Article Tells About Nick GAS

29
Jake_1079
Underrated animated epics.
First there was Disney, then Don Bluth, but in between were these lost gems.
-16
Retro4Everybody
The Waste Of Our Childhood.
The Fall Of Children's TV
More Articles
An unhandled error has occurred. Reload Dismiss