Nickelodeon Games and Sports for Kids (commonly referred to as Nickelodeon GAS, Nick GAS or GAS), is a U.S. cable television network which was launched on March 1, 1999 as part of MTV Networks' suite of digital cable channels. Olympic swimmer and Figure It Out host Summer Sanders was named the Commissioner of Nick GAS. Dave Aizer and Vivianne Collins were the network's original on-air hosts, with Mati Moralejo joining soon after.

In lieu of commercials, Nick GAS aired interstitial segments, some of which were produced at Nickelodeon Studios in Orlando, Florida. However, in-show advertising (like consolation and grand prizes of Legends of the Hidden Temple) were left intact, as it was part of the show itself.

The studio segments often included competitions between families, or interviews with athletes and other celebrities. Other interstitials included "Heroes of the Game", "GAS Grill", "Trade Tricks", "Time Out", "Skill Drill", "MLS Play of the Week", and in the early years of the network "This Day in History". Some looked at Nick GAS as a children's version of Game Show Network.

At 6:00AM Eastern/5:00AM Central on December 31, 2007, Nick GAS left cable after Figure It Out and was replaced by The N, which became a 24-hour channel after splitting from sister channel Noggin. However, it is still currently seen on Dish Network and SKY Latin America. 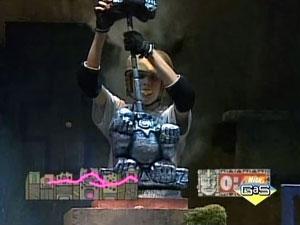 The Nick GAS Logo On The TV Screen,Alternive Versions Have The Logo On Other Sides Of The TV.

On January 2, 2000 Make the Grade (which was last played on regular Nickelodeon on December 29, 1991) started airing on Nickelodeon GAS.

On December 27, 2002 game shows such as What Would You Do? and Super Special Double Dare were removed and Double Dare 2000 was taken off Nickelodeon and put on Nick GAS. This was also when programming blocks such as Extreme GAS, Family Fuel, Heads Up! and Wild Card were removed.

In Spring of 2003 Nick GAS began to broadcast original series. This was when they began showing Gamefarm, Play2Z, Robot Wars and Splash TV.

On November 26, 2004 You're On!, the original Double Dare, plus the Camp GAS and Double Dare Double Play blocks were removed from Nick GAS.

On November 1, 2005 Pumping Gas was removed, along with Super Sloppy Double Dare, Global GUTS, Rocket Power, Speed Racer, Scaredy Camp, SK8-TV, Wild and Crazy Kids and Family Double Dare, to be replaced with additional repeats of shows such as Legends of the Hidden Temple, Get the Picture, Nickelodeon GUTS, Figure It Out and Double Dare 2000.

On September 4, 2006 Finders Keepers was removed, and replaced with Figure It Out and Legends of the Hidden Temple, leaving only six shows regularly broadcasted on the network. Afterwards, Nick GAS played five of its six shows in heavy rotation, with Nick Arcade being played twice per day during late night hours only.
On December 31, 2007, Nick GAS was removed from digital cable and became a broadband service with The N taking over the channel space currently occupied by the Nick GAS channel, as stated below. Dish Network viewers, however, still receive the channel, also as stated below.

On January 14, 2008, Nick GAS was finally added to TurboNick. The first episodes offered were from Double Dare 2000, Figure It Out, Global Guts, Get the Picture, Nickelodeon Arcade, GUTS, and Legends of the Hidden Temple.


Switch to broadband
On December 31, 2007,Nick GAS left the digital cable channel lineup and became an online-only service on TurboNick, while The N took over Nick GAS's channel position after splitting from Noggin. DirecTV, Dish Network, Time Warner Cable, and Comcast have confirmed that they will air both Noggin and The N.

The changeover occurred at 6:00AM Eastern/5:00AM Central, making the 5:30AM Eastern/4:30AM Central airing of Figure it Out the final program aired on Nick GAS. After the "You are watching Nick GAS" announcement, the "Your games, your sports" sequence which aired before the 'up next' sequence every half hour was aired one last time, and the network ended anticlimactically with The N being switched over before the sequence ended (A static line could briefly be seen during the switch), leading into the start of the pilot episode of Instant Star.

Now,I Am Going To Talk About Nickelodeon GUTS

GUTS was a 30-minute "action-sports" game show that aired for four seasons on Nickelodeon from 1992 to 1995. Mike O'Malley presided as host; Moira Quirk (often called Mo) was the referee. The show was taped in Universal Studios Florida on Soundstage 21 which was not part of the Nickelodeon Studios Complex, but was rented by them.

Problems with the switch


Due to reasons not yet disclosed by Echostar, Nick GAS has remained on-air for Dish Network customers. Subscribers had reported a continuous black screen when the transition was planned to occur. Echostar then undid the changes, returning the station to Nick GAS's normal program lineup. This retainment of service is possible since the channel ran on an automated schedule. Noggin and The N continue to switch on channel 169 at 6:00AM Eastern/5:00AM Central and 6:00PM Eastern/5:00PM Central daily.

DirecTV also suffered from the glitch until 7:25AM Eastern/6:25AM Central. Most digital cable viewers saw no problems with the transfer from Nick GAS to The N.


Programs formerly broadcast on the network

5
Quote O' Matic
Fang: "I squash you all!"
Added By: KPFan127
Dave the Barbarian 12
System
90s kid
the 90s was the time of my life
An unhandled error has occurred. Reload Dismiss