Animation that's been forgotten or just plain underrated..
By dg
On
I wanted to write about animation, that's not really been noticed enough and given the respect it deserves. At the moment these are the ones that I really feel need more attention or what ever. I know theres loads more but these are my main titles. Its a bit of a strange mixture, hopefully your be able to think of more and tell me your choices.

This is a classic cartoon, which every one watches when they are a kid. Its another great cartoon, showing great fantasy with dragons and knights. I loved this film so much as a kid,the music was great especially the opining song, which is really powerful. 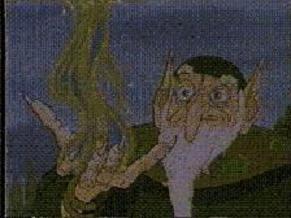 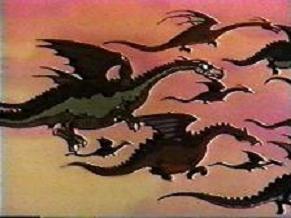 Dragons have always been a myth obviously but the cartoon really gives it a magical feeling, with interesting characters along the way,not to mention the villains. A man called peter Dickenson voiced by John Ritter gets transported back in time, to help destroy the evil Ommadon, voiced by another great actor James earl Jones.The evil Ommadon can only be destroyed by physics, showing that fact is more real than magic. Its a fantastic cartoon and story, which captures the imagination of every child who watches it. 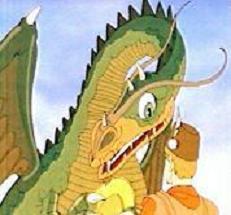 Part of the bubblegum crisis series and one not to miss. Out of all of them, this is the best in my opinion. Its non-stop action all the way, with some great animation. Not one of Mangas well remembered films but when I did some searching, I managed to get it and it ended up being a really great choice.Theirs three episodes for three different characters Gogul ,Benten and Sengoku.There all fantastic, which all give something uniqie in there own way, with great villains. My favourite episode would have to be Bentens, which was the last episode with the vampires. 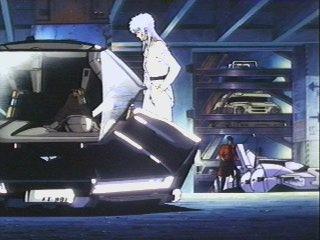 Each story really pulls you in and great to watch, if your a Manga fan you will love this. You can compare it to AD Police but this seemed so more interesting and fun to watch.
This film is defiantly one of Mangas finest and up there at the top, its just a shame its not noticed as much as the other mainstream titles. 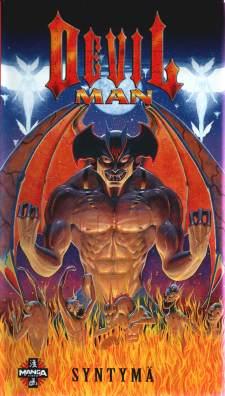 
This is a great Manga, which is mean and gory. Its one that should defiantly be noticed more and split in two parts which are both great. The introduction is awesome, with creatures killing magical fairies in a gruesome way, infect most of the film is like this. 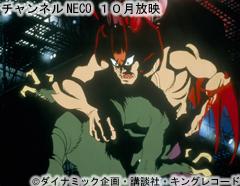 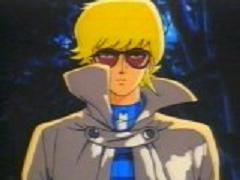 You are then introduced to the main characters, Akira a young man very caring but strong when needed. His best friend Ryo who turns up out of nowhere, to take Akira away. He takes him to his house to perform an ancient ritual, that will turn him into a Demon called Devilman. His girlfriend Miki, who is seen little in the first part tries to follow but was told to go away. Basically after you learn more about the origins and story which are very well told and interesting, its mostly gore and action for the rest of the part. The thing that annoys me slightly, is his best friend was never turned into a demon but you learn later on that he has some kind of power in a sense. 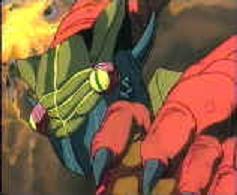 The second part was great as well, carrying on from the first part. You get to see a little of the past but only from Akiras mother, so there's no more origin to tell but the story and character development which makes up for it. Although the ending was a little weak, it still makes you satisfied.
A sequel was made recently, I noticed it had bad ratings so Ill give it a miss. I suppose they told all they could with it back then or the people who carried it on just didn't have a clue how to make and tell another story. I would have loved to see Devilman fight Satin and know more about him and his friend and the magical fairies that were seen in the first part. Hopefully one day the company that made the film, will return to finished it off. 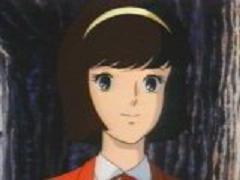 The film because split into two part, feels similar to the Guyver but has its own unique feel which is great.Unfortanly like the Guyver, they never managed to finished it but the two parts hold strong today and I would consider it to be a classic Manga. 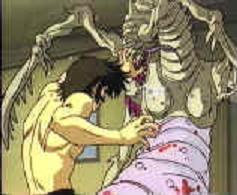 A brilliant cartoon adaptation of J.R.R. Tolkien's magnificent fantasy adventure novel, which I grew up on before the movies came out and found that I enjoyed it much more.

For me I found that I enjoyed this animated movie version made in '78 so more enjoyable. Maybe because I saw it first. But when they released the movies, it didn't seem to give me the same impact as when I watched the cartoon. I love the 1978 version because it seemed much darker and gloomier. The characters seemed more likable and funny. You could warm up to them much easier and they had a strange way of speaking, I suppose the Middle Earth kind of way from the book which really made it much better and original . I thought the movies were good but they didn't seem to capture the real darkness that the cartoon had, not for me any way. I know New Zealand is a beautiful country but I wanted a darker and gloomier look and not the sunshine that was seen alot, in my opinion. There's nothing really new in the cartoon apart from the tone of it and of course the great artwork, because, like I said, it seemed darker and had much more fantasy feel to me, which was great. The only thing I did find better was Gollum. He seemed more friendly but still threatening rather than the movie version which was more evil and sinister. I found watching the movie Gollum annoying at times with his Donald duck like voice which the cartoon version didn't sound like but instead like an of old creature sounding man which I found allot easier to watch 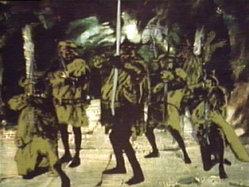 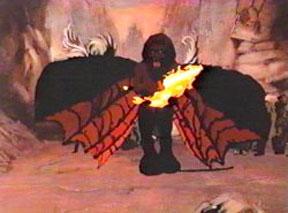 I found the Orcs alot scarier in the cartoon as well. It seemed like they digitized real people in it, which I suppose was a good technology for its time and the ring wraiths were still as scary as they were betrayed in the film, but they seemed much scarier with the slow build up's and eerie music when Frodo goes to the dark side, when putting on the ring. The battle scenes are awesome and the story and characters are great like I said. One of the best bits for me was the Two towers which was a final part in this animated version, it was an amazing battle scene with humans finally retreating.Its a fantastic cartoon and I still watch it, if you haven't seen it before you should check it out make up your own mind for yourself. Although its quite dated now I still feel it holds up well but the only disappointing thing about it, is they never managed to finish the whole book which would have made so much better and would have made a truly classic film . 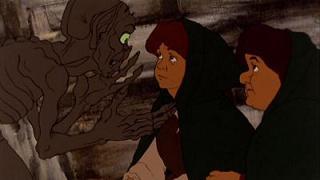 This is a film I was trying to remember for ages, until I came on here and some cool person found it. I have lots of fond memories of this film, especially of a kid because its when I watched it for the first time.
Created by Jean 'Moebius' Giraud who is a brilliant designer and worked on some other great films,he did the heavy metal comics. Its a weird and bizarre cartoon full of strange creatures,people say Space odyssey 2001 was a trip,well watch this. 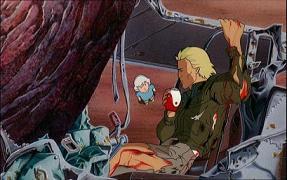 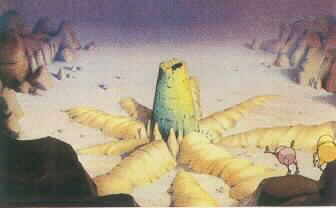 Its about a boy that gets stranded in a strange world and his dad tells him to find help and the adventure begins.One scene that always stands out in my head, was when the rhino creatures gets killed and taken up by these weird tentacles, which as a kid pretty disturbed me because he seemed the boys only companion, only to die in a horrible way. Its a very sad film as well, when you learn more a bout the boy at the end of the film. 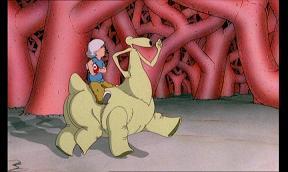 When I watched it again, I thought it wouldn't hold up but surprisingly it did and the artwork was really well done, which I didn't realize because I haven't seen it for a long time.
The film for me is a French master piece, with great characters and a great story. A very surprising ending so I wont spoil it. 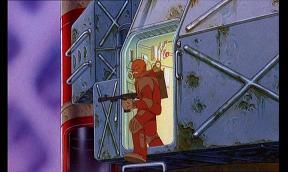 Nostalgia can be a cruel thing sometimes.

Although, the movie did introduce me to Tolkien's books.

Are you sure you want to delete this comment?
For me, Bakshi's "Lord of the Rings" will always be one of those movies I used to watch religiously as a child and then returned to several years later only to find out that it was pretty terrible.

Nostalgia can be a cruel thing sometimes.

Although, the movie did introduce me to Tolkien's books.

One glaring omission is The Iron Giant. That animation was quite superb... although it did rely a little on computer animation... the attention to detail was pretty good.

Are you sure you want to delete this comment?
These are mostly Anime shows &amp; the article is rather disappointing...

One glaring omission is The Iron Giant. That animation was quite superb... although it did rely a little on computer animation... the attention to detail was pretty good.

Are you sure you want to delete this comment thread?
Hiro
Flight of the Dragons-I remember that one.
The Lord of the Rings cartoon-rotoscoping=limited animation
Devil man is awesome.

Are you sure you want to delete this comment?
Flight of the Dragons-I remember that one.
The Lord of the Rings cartoon-rotoscoping=limited animation
Devil man is awesome.

BTW, that animation technique used on mostly the orcs and the latter half of the moive is called "rotoscoping"- filming live-action and then drawing the cartoon cels on top of the film. It looks quite ugly and fidgety.

Are you sure you want to delete this comment?
Actually I didnt like the animated version of Lord Of The Rings a whole bunch. If youve read the book, it just seems rather disjointed and sometimes even ludicrous. I admit, it wasnt a bad film for its time, and their a few points even Peter Jackson couldnt do better, but it didnt age well at all. I wish they could have done a better job and not try to attempt to cover the whole book in one movie.

BTW, that animation technique used on mostly the orcs and the latter half of the moive is called "rotoscoping"- filming live-action and then drawing the cartoon cels on top of the film. It looks quite ugly and fidgety.

Are you sure you want to delete this comment thread?
Jobelincolnski
Oh, I just noticed your icon at the top of the article right after i posted. I understand now. Now I'm the one sorry for double posting.

Some other great cyberpunk movies to check out that are kinda underrated are Battle Angel and Twilight of the Dark Master.

Are you sure you want to delete this comment?
Oh, I just noticed your icon at the top of the article right after i posted. I understand now. Now I'm the one sorry for double posting.

Some other great cyberpunk movies to check out that are kinda underrated are Battle Angel and Twilight of the Dark Master.