My review of 101 Dalmatians The Series
By The_Dark_J_Avenger
On
101 Dalmatians: The Series is a Disney animated Television series that aired in 1997-1998. It was created by Jim Jinkens (creator of Disney's Doug) and in some episodes was animated and directed by Ken Boyer. It was one of my favorite shows back in the day (even though I first saw it when it was playing re-runs).

This show was one of the best 90's toons that aired on Toon Disney. The show focuses on four main characters, Lucky,Cadpig,Rolly, and Spot. 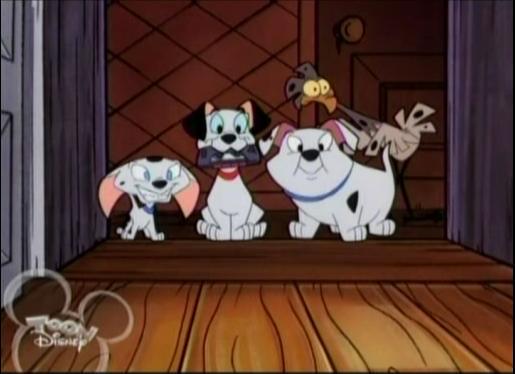 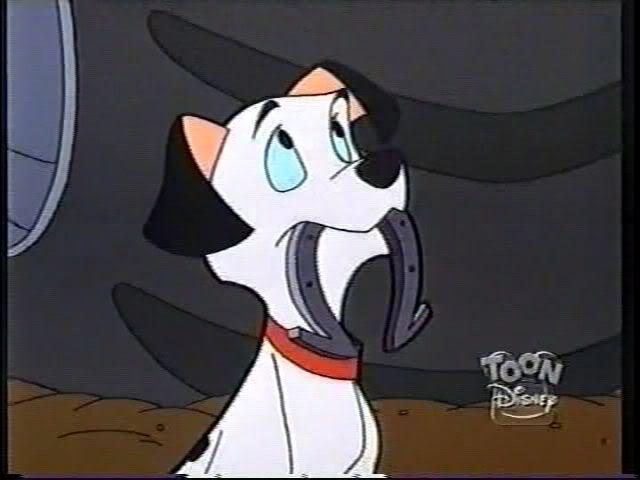 Lucky, was one of my favorite characters in the series, he is the dalmatian with black ears from the movie, and he has horseshoe-shaped spots on his back. Lucky's characteristics are that taken from Dodie Smith's book, where he is the ringleader and is brave, sometimes to the point of foolishness. Lucky also has a rivalry with Tri-Pod as well as Mooch. Lucky is also a TV addict and his idol is the dog TV star Thunderbolt. 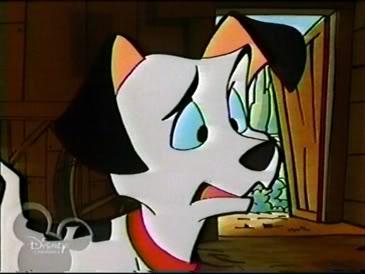 Lucky will often create plans and ideas to stop Cruella De Vil, his plans can get the gang in trouble. Lucky is quick thinking and will easily get the group out of trouble as well as tight situations. Most fans of the series (including myself) consider Lucky as one of the most favorable characters of the series, while others see Lucky as always "hogging the spotlight". Throughout the series, Lucky puts his friends before himself as seen in several episodes of the series. 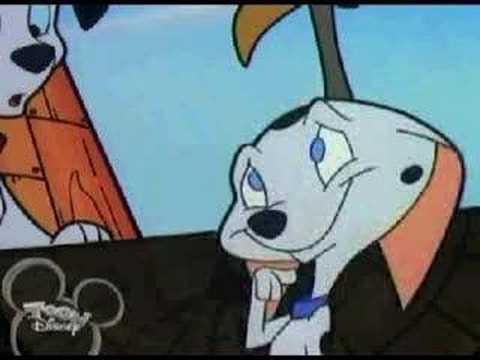 Cadpig is my second favorite character in this show. She always makes me laugh with her sarcasm and her funny metaphors. Cadpig is a character who is not featured in the movies,she is an original character from Dodie Smith's book and is a new character featured in the series. She is the pup with long floppy ears,a big head,and blue eyes. Cadpig in one episode of the series diagnoses herself with P.D.S (Petting Deficit Syndrome) a disease which results in a poofy tail,runny nose,a sense of loneliness, and her fur stands on end. Cadpig also likes to speak what Spot calls "Metaphysical Metaphors". 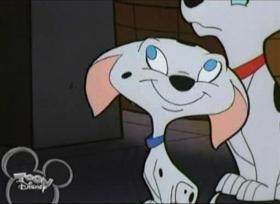 Cadpig in another episode has an alter-ego named Gipdac which is basically Cadpig spelled backwards. Cadpig can also perform abilities that her other siblings can't often do such as life another character who is twice her size, she can only do this when she expresses anger. Cadpig also seems to have an advanced vocabulary as she mentioned once that she got a thesaurus for her birthday. She will often express several phrases when it comes to words of stupidity such as "Moron". Cadpig also is a spiritual guru type pup who devotes her life to world peace. In the book, she is a TV addict and is afraid of everything.

Cadpig is voiced by Kath Soucie. 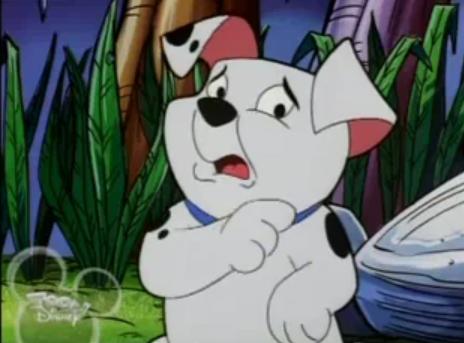 Rolly, I considered to be an okay character, even though he wasn't my favorite, he still was funny. Rolly is the chubby pup who is a bottomless pit, as he will eat a lot. Rolly is also loyal to his friends and will sometimes help the gang out when he isn't thinking about food. No matter what situation the group is in, Rolly is always hungry. Rolly hates being called "fat" and often will get angry when called such.
Rolly is voiced by Kath Soucie. 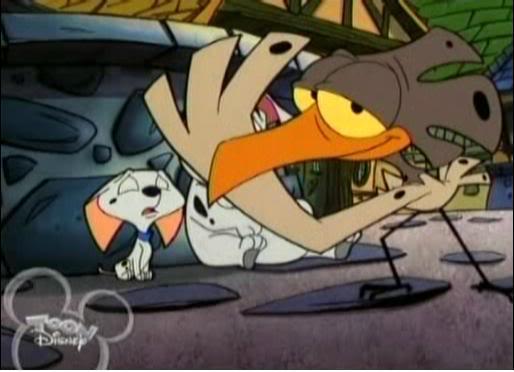 Spot is probably considered one of the most hated and worst characters of the series,though I found her to be a likable character and pretty funny to boot. I see Spot as the common "sidekick" of the four main characters. She made me laugh with her humor and spazzing out all the time. Spot is the chicken who dreams of becoming a dog and she will do dog like antics such as scratching herself with her feet,bark, and it is once mentioned in one episode she urinated on a fire hydrant. 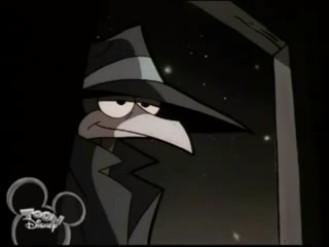 Spot in some episodes of the series has an alter-ego named Pullet Marlow who is a detective who solves mysteries on the Dearly Farm. Spot is also very smart and is good at math. Spot can also get scared really easily and she tends to bounce off the walls "literally" much to the other characters annoyance. While most fans of the series find Spot to be annoying, I found her to be a enjoyable character as she provided comic relief throughout the show. I was a little tiny bit disappointed however that the fourth character was not Patch, as in the book he is over-protective of Cadpig. As Spot is the one of the main characters, I found that it would be an okay fit.

Spot is voiced by Tara Strong.

I really enjoyed 101 Dalmatians: The Series because not only was it one of my favorite cartoons, but it had funny humor,great unforgettable characters, and the show overall was great. 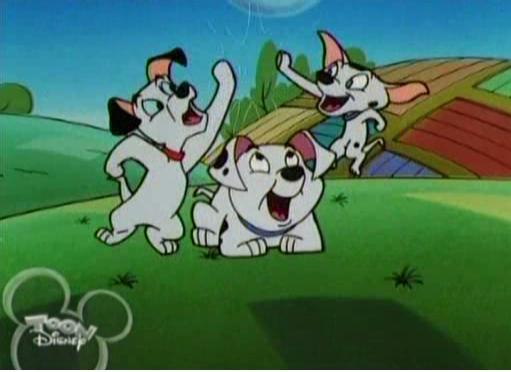 The series also had a cool catchy theme song and the animation was superb for the style at the time. Sadly, I hated the fact that the series only ran for a couple of years before being canceled, but it was nice to know there was re-runs as I first saw the series when it was re-showing the episodes. 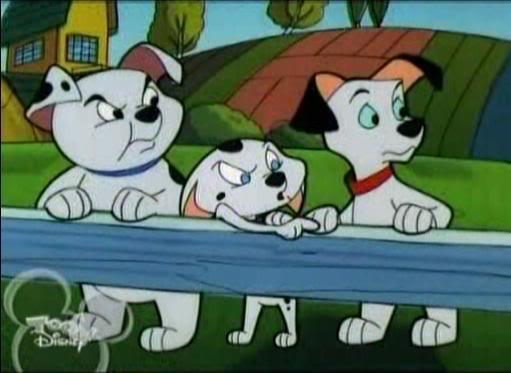 The show ran around 65 episodes from 1997-1998. It then showed re-runs from the early 2000's up until January,31,2006 when the series was canceled for good. Since that day, 101 Dalmatians:The Series no longer airs in any country (even the United States),although there are rare exceptions in England and other European countries. This series thankfully can still be watched on Youtube and other video sites.

As a fan of the series, I actually got to meet animator Ken Boyer who had worked on some episodes of the series. He was a very nice man and even sent me some early concept sketches of the show. Ken Boyer said that 101 Dalmatians: The Series was not popular enough, and he stated that Disney decided "to be done with it" and thus the Series was then canceled.

Hopefully Disney will create more TV shows like this in the near future and bring back that classic animation style we've come to know and love.....
3
Login To Vote!

7
Quote O' Matic
Prince: "I shall spend the rest of my life in mourning for her."
Snow White 11
GeneralCritic99
The Best Movie Trailers
The best... and the worst movie trailers
An unhandled error has occurred. Reload Dismiss