best horror villains of the 80s
By Achilles
On
Here are some of the best and now iconic movie villains and monsters.
The modern horror lacks any identity nowadays, with every movie having the same vibe, feel and similar story to one another,for example Disturbia, Silent Hill, Stay Alive, White Noise, The Grudge etc. The remakes, which are so popular today, never live up to the expectations and should actually never be done in the first place - there's no need to repaint Mona Lisa.
Even the original movies don't have any memorable characters or villains, like the dull (in my opinion) Saw. The supernatural and monsters are still somewhat present (The Cave for example), but in a very cheezy way in movies that have just too much CGI to the point where it looks like a cartoon or Toy Story kind of movie. I do think that Doom was close to being a good Aliens-like movie. close.

I'm gonna describe 6 of my favorite 80s horror movie villains, 3 that are supernatural, 3 that are human beings

One of the most iconic 80s horror villains is definetely Freddy Krueger. Who doesn't know the hideous, burned man with his finger blades? Freddy represents everything that was great about 80s horror - a memorable character whom many feared throughout the decade.The deep, menacing voice and sick sense of humor, dirty red and green sweater and old hat. Classic, just classic. Wes Craven created a series that to this day is the epitome of the horror genre 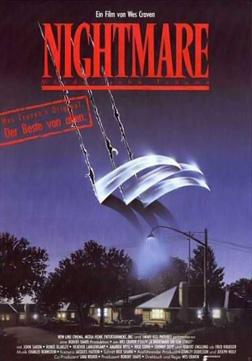 " A Nightmare on Elm Street (1984)"
On Elm Street, Nancy Thompson (Langenkamp) and a group of her friends including Tina Gray (Wyss), Rod Lane (Garcia) and Glen Lantz (Depp) are being tormented by a clawed killer in their dreams named Freddy Krueger (Englund). Nancy must think quickly, as Freddy tries to pick off his victims one by one. When he has you in your sleep, who is there to save you?

Classic Freddy as we know him. 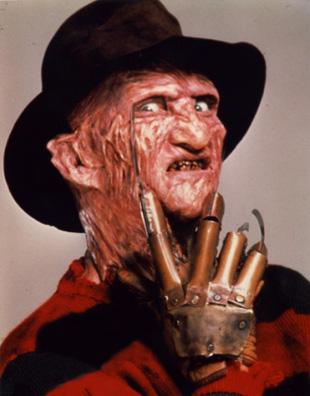 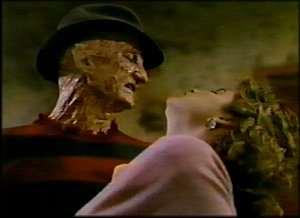 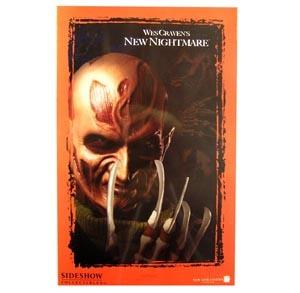 The Nightmare On Elm Street franchise was completely ruined with freddy vs Jason in which both characters became a parody of themsleves and the legendary horror icons were ruined. The movie makers tried to re-create his classic look, but he didnt look right and didnt have that creepy and mystical feeling to him Another iconic villain of the 80s horror movies is Matt Cordell, the monster from Maniac Cop. Brilliant 80s horror movie about a mysterious murdered in Manhattan who's apparently dressed as NYPD officer. As we later find out in a movie, he is actually a former cop who was killed by the people he put in prison, and now he came back to life "only now he kills innocent people". 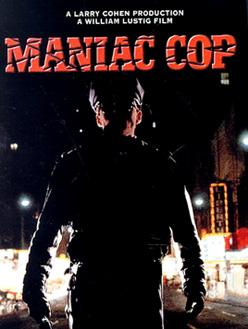 "Maniac Cop (1988)"
Innocent people are being brutally murdered on the streets of New York by a uniformed police officer. As the death toll rises and City Hall attempts a cover-up, Frank McCrae heads the investigation. A young cop, Jack Forrest, finds himself under arrest as the chief suspect, having been the victim of a set-up by the real killer and a mysterious woman phone-caller. Forrest, his girlfriend Theresa, and McCrae set out to solve the puzzle before the Maniac Cop can strike again

Maniac Cop from the first movie looked like he did before he died, with few scars on his face. The movie doesnt clearly state wheter he really died or was he heavily injured and then went nuts. Althought he cant be killed by the bullets and few people said his hands are cold. 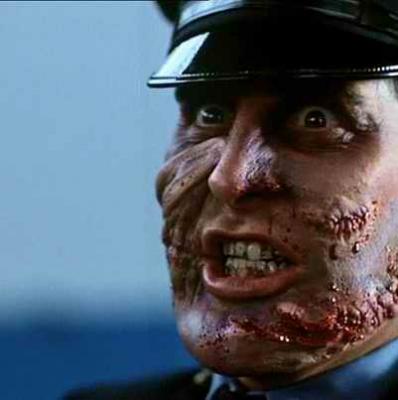 Any doubts were erased with the second movie whcih clearly says that Cordell is indeed, not human. Also, the first movie was a low budget flick but when it turned into hit, obviously the second movie had a much bigger budget, hence Cordell's appearance changed completely. The third movie made him look slightly different again 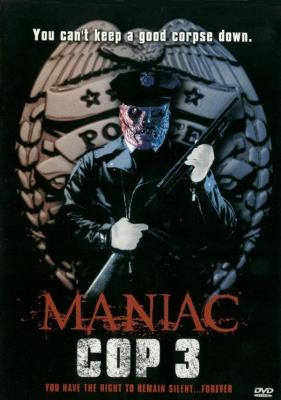 Charles lee Ray is another movie villain in the same vein as the previous two guys. The city strangler uses voo doo magic to transfer his soul into doll. The first two movies from the Child's Play series were just brilliant and really scary, even for today's standarts. I hate the fact that the series was changed into comedy horror genre and became a parody of itself starting with Chucky's Bride. 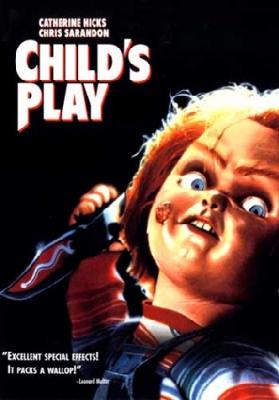 "Child's Play (1988)"
When serial killer Charles Lee Ray is mortally wounded in a police shoot-out, he uses a voodoo spell to transfer his soul into Chucky, a "Good Guys" doll. Andy receives the doll as a birthday gift, and Chucky soon resumes his killing spree. However, Charles doesn't want to be trapped in the body of a doll forever. His only escape would be to transfer into the first human he revealed his true identity to... which places Andy in mortal danger

the classic Chucky (As seen in the first three movies) 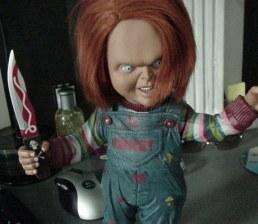 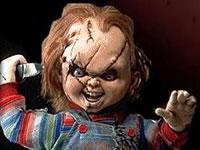 The 'natural" 80s villains who dont have any superpowers, were really interesting also. They had a character, and something about them that just made you shiver. Of course, it's partially due to the great actors portraying them

John Rider, as he itroduced himself, was creepy and sinister, and sounded like a psychopathic loner on a suicide run. Great music, and the feel of loneliness and paranoia is what made this movie great, along with a great performance from Rutger Hauer himself. 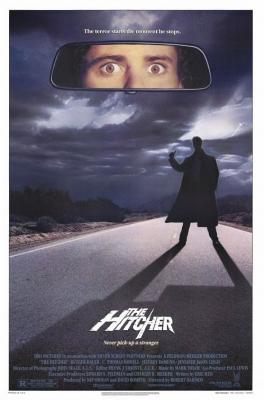 "The Hitcher (1986)"
A young man transporting a car to another state is stalked along the road by a cunning and relentless serial killer who eventually frames the driver for a string of murders. Chased by police and shadowed by the killer, the driver's only help comes from a truck stop waitress 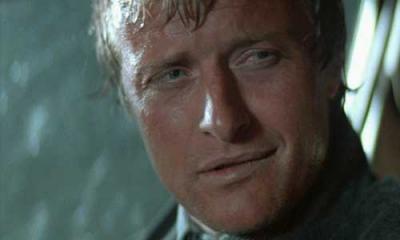 Another great human villain is Charles Luther from "Runaway". A mad scientist and a businessman with a stare cold as ice sreeped me out when i was a kid. Gene Simmons of Kiss gave a terrific performance in this Michael Crichton's flick "Runaway (1984)"
A police officer specializes in runaway robots in the near future. When a robot becomes homicidal, he begins to unravel a mastermind's plot to create killer robot weapons, and then the policeman becomes a target himself 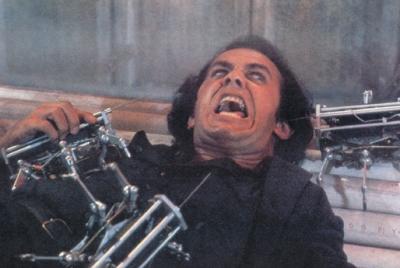 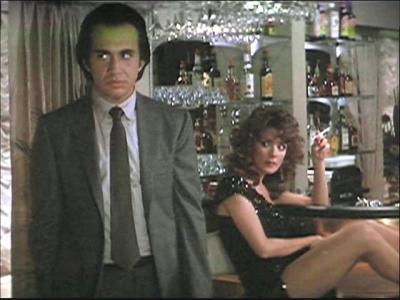 He's not so bad now, but definitely still a great villian and still understandably creepy. :)

Are you sure you want to delete this comment?
As far as monsters in the closet and the such that children are afraid of, I'd have to list Freddy as one of the things that I was convinced was going to get me in the middle of the night. I made the mistake of watching one of the "Nightmare on Elm Street" sequels at a very young age lol.

He's not so bad now, but definitely still a great villian and still understandably creepy. :)

p.s i love that snap shot of jason and freddy its awsome cya :)

Are you sure you want to delete this comment?
but all the movies sound good too but i still like jason :). i hope u get jason in there.

p.s i love that snap shot of jason and freddy its awsome cya :)

Good movie as far as plot goes... horrible supporting actors. Kelly Rowland? C'mon.. They could have at least tried!

Are you sure you want to delete this comment?
Freddy vs Jason was... dissapointing.

Good movie as far as plot goes... horrible supporting actors. Kelly Rowland? C'mon.. They could have at least tried!

And Freddy vs. Jason was pretty good. But then again, I'm the type of person who loves all sides of Freddy's personality. If the bastard son of a hundred maniacs wants to have some fun with his victims... and at times the corpses as well... why not let him? It's good entertainment to me. Then again, that's just my opinion.

Are you sure you want to delete this comment?
Personally, Jason and Micheal Myers were... boring. To me, the movies were just about a big-ass, indestructible guy with a big knife who walked slowly and just stabbed his victims to death. It didn't seem like there was much of a reason for either of them. (Though I am looking forward to seeing Rob Zombie's 'Halloween'. It looks like it'll give a better background and description of the Myers Family and what went on in it.) At least Freddy had a damn good background. And he came in your dreams, damn hard to kill. That, and Freddy was a creative guy. He was fun to watch and funny in the later movies.

And Freddy vs. Jason was pretty good. But then again, I'm the type of person who loves all sides of Freddy's personality. If the bastard son of a hundred maniacs wants to have some fun with his victims... and at times the corpses as well... why not let him? It's good entertainment to me. Then again, that's just my opinion.