These are the terrors that scare me to death!
By dalmatianlover
On
Welcome back to another edition of "Wasting Your Time". Hey, I gotta have a sense of humor once in a while.

You know, movies from the 80's were really important parts of our childhood. When you watch a movie that has a hero and a villain, we all tend to route for the heroes, but sometimes, the villains are really cool. However, I'm sure that when we were little, there were plenty of villains that scared us to death. Since I was a small child during the later half of the 80's, I can understand, and looking back on some of those bad guys, I can just see what made them so freaky! That's why I've compiled a list of what I think are the Top 20 Scarriest 80's Movie Villains. Also, being the month of Halloween, I thought it would be appropriate to make an article like this. So, I hope you all have an extra pair of underwear handy, because some of these villains might make you want to change! 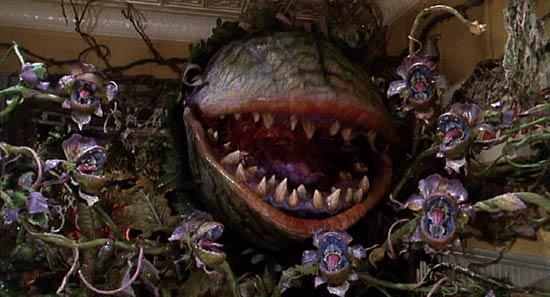 #20 - Audrey II (from Little Shop of Horrors)
Now, to be fair, he is kind of a cool character. I mean, it's a radioactive plant that talks and grows at an enormous rate. What's scary about him though is the fact that he feeds on human blood. I sure am glad plants like this don't exist in real life, because I'm sure there isn't enough blood in the world to keep them healthy. So, when you hear a plant say, "feed me", that's when you know you gotta run for your life. 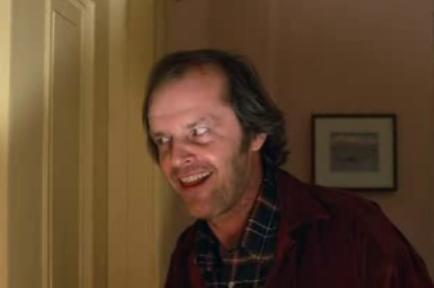 #19 - Jack Torrance (from The Shining)
I'm sure a lot of horror movie fans will kill me if I didn't put this guy on the list. At first, he seems like a normal dad, sometimes stubborn, but not too bad. It's later when he turned into an evil psychotic maniac chasing after people with an axe! Why? Who knows? It's still really scary regardless! When he starts quoting Ed McMahon, that's when you're really in trouble! This movie made Jack Nicholson a master at playing scary characters. 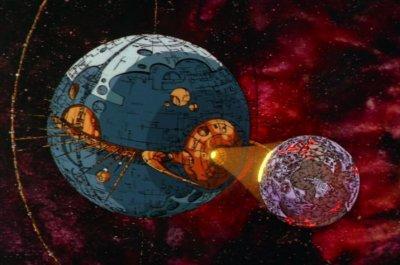 #18 - Unicron (from Transformers: The Movie)
Well, what is there to say about this guy? Should I have a reason to be scared of him? Of course! He's an evil Transformer that's even bigger than an entire planet! Seeing him transform and in motion is just really freaky. Not to mention, he's got this really sinister voice. It's almost identical to Dr. Claw from "Inspector Gadget", though in reality, it's Orson Wells doing the voice. Yeah, Transformers are quite big and could be scary if they're trying to kill you, but a Transformer that's bigger than the Earth and capable of destroying planets? That is some trouble! 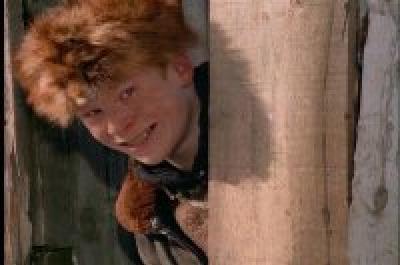 #17 - Scutt Farcus (from A Christmas Story)
If Scutt Farcus was at your school, he'd be your worst nightmare! He's more than just a typical school bully, but just the sound of his voice can strike you with fear, and he always comes out of nowhere just to leave you with an injured arm or a black eye. You know he's gotta be sinister if the wolf's theme from "Peter and the Wolf" is his theme music. 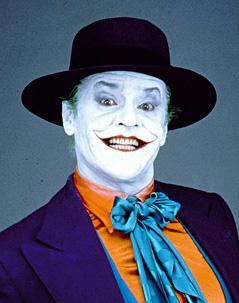 #16 - The Joker (from Batman)
What makes the Joker so scary? Well, he's a clown; is that good enough for you? When I was a kid, clowns have always frightened me. I didn't watch this movie a lot as a kid, but if I did, I'm sure as heck that this villain would have scared me to death! Caeser Romero's Joker is pretty much an evil Ronald McDonald who makes me laugh, Heath Ledger's Joker looks like a mess but is still bad ass, but Jack Nicholson's Joker, in my opinion, is the scarriest-looking one. Please, don't leave me in a room with him! 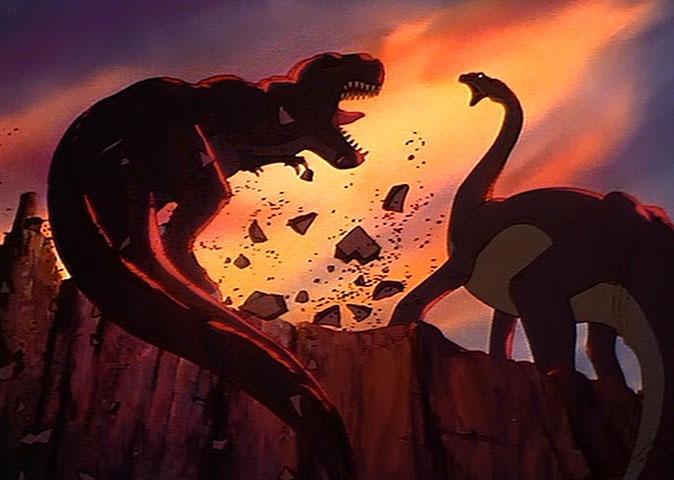 #15 - Sharp Tooth (from The Land Before Time)
This villain never really scared me no matter how many times I watched this movie, but many kids were scared of him. Now that I think of it, having a carnivorous monster who is 10,000 times the size of the hero could actually be quite scary. Thinking about Sharp Tooth makes me wonder what the cut scenes from "The Land Before Time" were like. 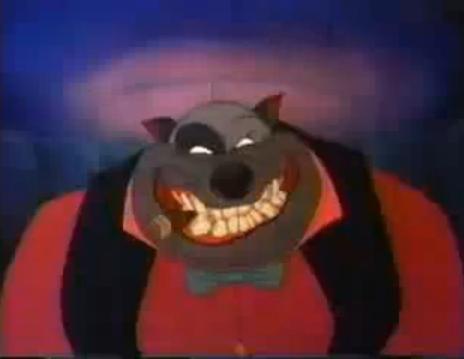 #14 - Carface (from All Dogs Go To Heaven)
Villains who smoke a cigar and have a business attire are always some of the best. I've never been a fan of villains who used to be friends with the hero, especially ones who want to kill the hero. I think this villain is appropriately-named. Looking at this guy's face will make any child under 5 cry in fear. Oh, and let's not forget that creepy voice. 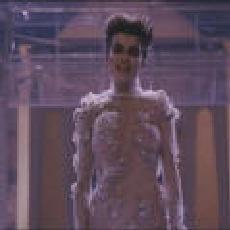 #13 - Gozer (from Ghostbusters)
This villain just has "creepy" written all over him. I can't even tell what he's supposed to be. Is he a cross-dresser, or is he a female? Is he naked, or is he clothed? I don't care what you other Ghostbuster fans think, but I think this guy is way scarrier than the Stay-Puft Marshmallow Man. If you ever confront this guy in your life, remember to take Winston's advice. 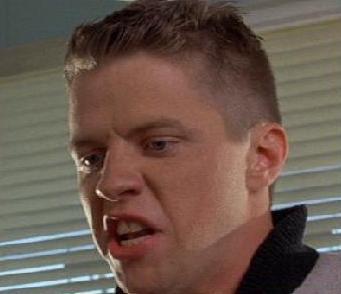 #12 - Biff (from Back to the Future, Part II)
I absolutely hate this guy! I've only seen bits and pieces of the "Back to the Future" movies, and while he is in all three of them, it was the second movie where I truly got to know what his character is like. A guy who's always yelling at people, harrassing people, being mean to people; Biff is the ultimate asshole! The scary thing about him is once he makes contact with you, he will never leave you alone! If you thought Scutt Farcus was mean, then try Biff! 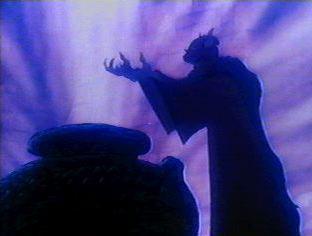 #11 - The Horned King (from The Black Cauldron)
Now, this is what I call a sinister bad guy! A hooded guy with horns always lurking in the shadows always mean to his henchmen and has a demonic voice. You just don't know what kind of powers this guy has, and you're always afraid to know, and that's what makes him so scary. We don't see his true power until towards the end of the movie. This movie does have it's way of building up suspense. 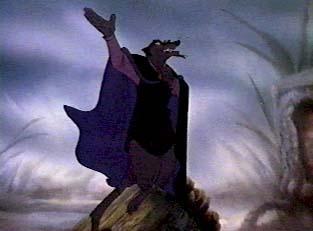 #10 - Jenner (from The Secret of NIMH)
If you want to talk about someone intimidating, then take a look at this guy! Jenner is pretty much everything you need to make a scary villain: dark clothing, an evil smile, a scary laugh, always lurking in the dark, and a desire to kill off one of the main characters. The movie itself is a very dark flick, but I think the movie's darkest moments come from this one character, who is such an awesome villain. 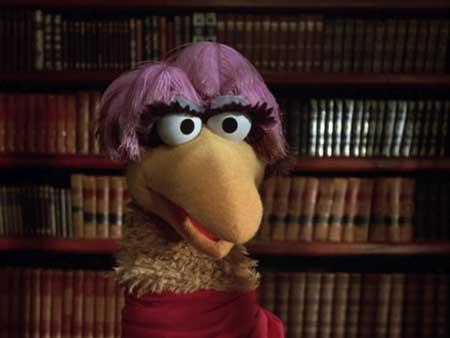 #9 - Miss Finch (from Follow That Bird)
Just looking at this character scares the living crap out of me. I don't know if I should consider her a friend or a foe, but I just don't trust her. Miss Finch is a 6+ foot tall bird who is forcing Big Bird to live with another family away from his home in Sesame Street. What a mean lady. Not only that, but she has these really scary-looking eyes that still give me nightmares to this very day! Worst of all, she can drive a car! How would you feel if she was stalking you for the rest of your life? 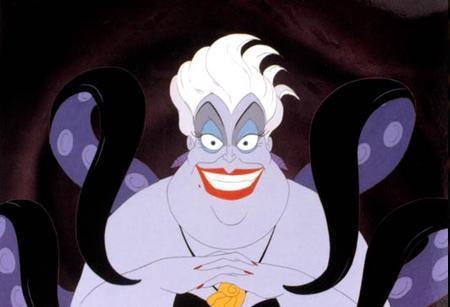 #8 - Ursula (from The Little Mermaid)
Ursula's got everything to make a quintessential villain: a dark look, a notorious laugh, phenominal powers, a desire against the hero of the movie, and a powerful song. She's the ocean's worst nightmare. I don't think anything else needs to be said. 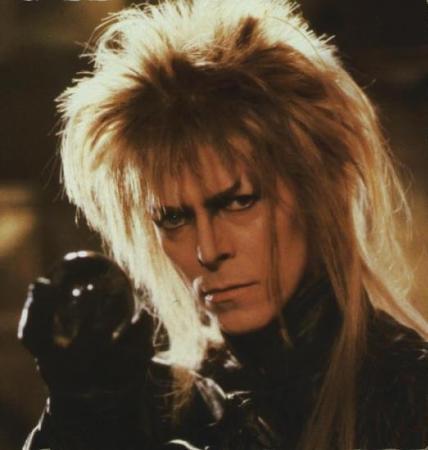 #7 - Jareth (from Labyrinth)
If having David Bowie as a villain isn't scary enough, then how about one who has magical powers and you never know when he's going to pop up right in front of you? Sure, he may be kind of laid back for a villain, but he still scares a lot of kids to this very day, I'm sure. Also, what's with that name? There's really something powerful about villain names that begin with the letter "J"; it seems to be a letter that represents power, darkness and fear. Oh, and speaking of... 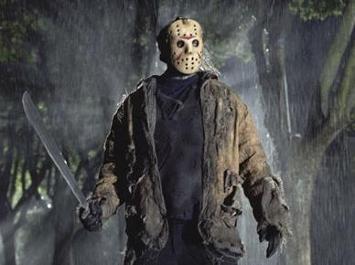 #6 - Jason Voorhes (from Friday the 13th)
I'm very thankful that this guy only exists in the movies. A psychotic killer who wears a hockey mask who always pops up out of nowhere to scare the living daylights out of you. This series of movies gave kids a very excellent reason to not go to summer camp. 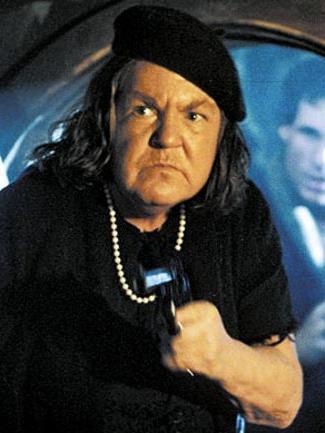 #5 - Mama Fratelli (from The Goonies)
This woman just freaks me out! I don't really know what she's doing in the movie or what is motivating her, but just by looking at that hideous face...I just don't trust her! I have never trusted Mama Fratelli no matter how many times I've watched this movie; I could always tell that she was up to something. 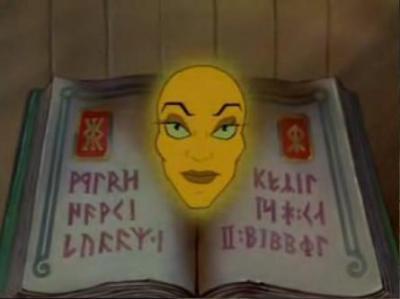 #4 - The Spirit (from The Care Bears Movie)
This villain is from probably the first movie I ever saw in my life time, and she still scares me to this very day! If you think a nasty, glowing face in a book is frightening, then try an extremely eerie voice to go along with it! Also, never underestimate her powers. Most of the time, you can't see them, but you can sense their presence as they work through things. Makes me wonder where this spirit actually came from. 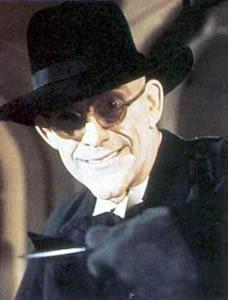 #3 - Judge Doom (from Who Framed Roger Rabbit)
I don't think there's any question that this evil, psychotic toon who messes around with everyone throughout the entire movie should be on my list. Sure, he may not seem all that scary at first, but just wait. Watch the movie all the way through, and you'll see what I mean. 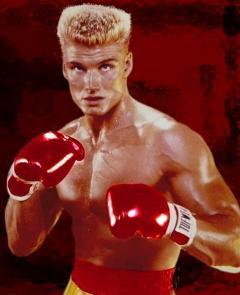 #2 - Ivan Drago (from Rocky IV)
Of all the opponents that Rocky Balboa went up against, who better to be afraid of the most than Ivan Drago? He is the most over the top boxer of all time. Words cannot describe how insanely powerful he is! He can kill you just by giving you one punch in the face! I honestly don't think there is any human being on Earth who would have the guts to go up against this dude, not even little kids who say that they're not afraid of anything!

Okay, as you'd expect, I saved the scarriest for last! So, are you all ready? Here it is: my pick for the #1 scarriest 80's movie villain of all time... 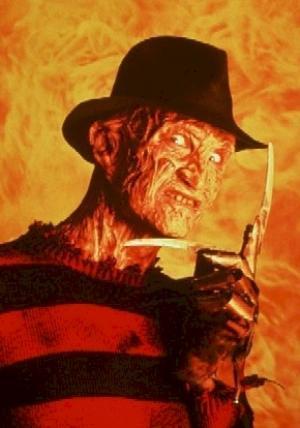 #1 - Freddy Kreuger (from A Nightmare On Elm Street)
This guy has to be #1 on the list; there's no question! He's got claws, a hideous face, a menacing voice, and unpredictable powers! Could you imagine someone who can enter your dream and kill you within it? If I was to guess what the Grim Reaper would look like decloaked, I would say something like this guy. Thus, making Freddy Kreuger my pick for the scarriest movie villain from the 80's.

So, there you go. Hopefully, I didn't scare you all too much by reminding you of these terrors of the night. I wish you all a good night, and have a safe Halloween.

(exits with night sounds in the background)
26
Login To Vote!
More Articles From dalmatianlover