Some bad movie you should watch if you're brain damaged...that means I am but whatever.
By Wizer
On
Hi fellow Junkers,

Don't you love crappy movies? I do. I'm not ashamed.
I think it's one of the better ways to get a good laugh. When i was young, like many others, i spent weekends watching the whole serie of Friday the 13th, Nightmare on Elm Street (man, did i loved Freddy's creative ways of killing.), and even more obsolete ones.

Yeah, i know, there's already a million reviews about shitty movies around the net. But hey, it is surely one of the greatest pleasure when i'm surfing for no good reasons.
So, combining these two time-consuming activities, why not?

Here's a few of the really bad ones i saw on big screen, or just on a common tv set.

Remember the times where series like Hercules or Sinbad aired? A ****load of bad movies came from these legendary moments, and gave the word ''cheesy" a new way to express itself. Yeah, i watched religiously these series, and yes I loved them. But this one was different.
Here's a few reason why:
1. People in that times didn't have blood in their veins. Yep, some scenes, like the big fight between the Crusaders and the bad guys, lacked blood. Thanks for the producers for instructing useful history facts like this ;)
2. In Polo's time, you can wear the same leather clothes for ten years, and it will never get torn, nor will it smell with your years of sweatin'. While you're at it: Hellooooooo ladies.
3. You can vanquish the badmotherfucker vilain by a swing of a sling. (Yep, not making this one up.)
4. It seems we mistook Marco Polo's life. Yes, who knew he was such an intrepid fighter, doing kung-fu on hordes of adversaries, instead of just dying of a javelin in his travels? Well, certainly not me.
5. If you need a fifth reason, look at the four point and make a sum of all the compiled facts.

Must say, at least this one entertained me. So bad that it's good...to laugh at :P

5. Queen of the damned 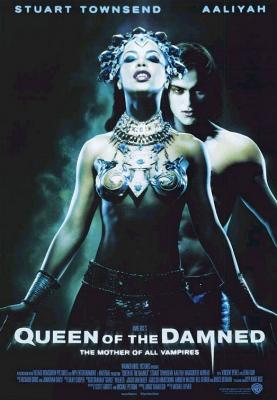 Don't get me wrong. Anne Rice is a great writer in my humble opinion. I enjoyed Interview with a vampire, and the other ones that came after that. But hire a clip producer to do a movie, hollywood writers, actors not fitting for the roles, add some ****, and you get this messed-up movie.
First, Marius (played by Vincent Perez, a good french actor, but not in this.) is not the mentor of Lestat, and I was pissed off by that. I must say, i prefered Lestat performed by Tom Cruise in the first one, he had the charm and the wits that the character had (and maybe today's ill mentality, but that's another story). Aaliyah (rest in peace), has good a dancer may she be, she's not decent enough to be an avatar of a queen that all that is evil. Oh come on, with those teeth, she looked like a chiwawa tryin' to mimic a bulldog.
What to say about the film itself. Anne Rice atmosphere supposed to be an ill-living and decaying world, where vampires and other creatures of the night live in a ever changing universe. Instead, you get an allegory of the music of Lestat, which is not a bad idea, but so far from the original context.
Well, this one deceived me, and sorry for those who liked it. 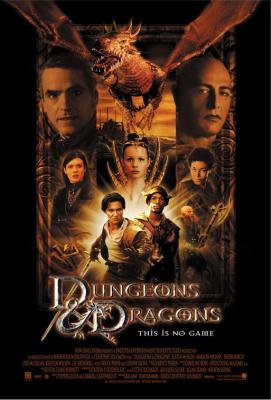 I'm a big fan of role-playing games. Man was i startled when I saw this. Good screenplay, but GODDAMNIT!!! was it bad.
(I'm sorry for this part, if you're not a dungeons fan, you might not understand quite my point here.)
First; you get the hero who's a little thief. A thief capable of magic prowess, vanquishing a level 15 fighter when he's only 2, smashing a great wand of Dragon summon without suffuring from the explosion that should have ensured, and even be worthy enough to receive a Moon blade (an elvish blade that only pure elves can be the wearer.).
Second; you get a dwarf who's as high as an human, who do nothing more than ranting about is misery and doesn't do a goddamn **** worth mentionning (and gets the thanks from the empress for self-esteem).
Third; a comic relief, protrayed by Shawn Wayans, a black american actor (Note here; this is not racisism, it's just to mention the point that black people is used as comic relief again.)
Forth; The bad guys. Oh man this one is preposturous. Jeremy Irons his normally a great actor, but has the black mage who's washed from suspicion because he wears a white robe, he's just too ****ing funny to be taken seriously. Damothar, what more can be said about this half-fighter/half-dragqueen (hey come on, blue lipstick??!??)?
Fifth; A Beholder who get tricked by a rock? Isn't it supposed to be one of the most intelligent creature of the universe of dungeons?!? WTF?
Sixth; Star-wars ripoff: The dragon's head stuck under the door; the three-eyed monster; the lightning-sword duel at the end; the temptation of greater power by the staff of Savril? If that's not enough, well, you're blind.
Seventh; an old and crumpy roof impales a whole dragon?
Eighth; an apprentice who can cast chain lightning and teleportation without failure at her level?!?
...
I could rant about this all night long...
3. Star crash 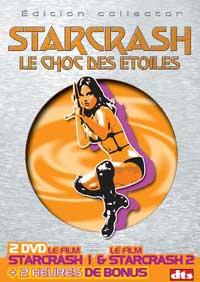 Oh boy that one made my day.
In the times were Star wars was just fresh an became a legend in just a few weeks in the story of the cinema, this one came out, marking too cinema...but not in the same way.
You can find many reviews of this movie over the net, and that picked up my curiosity. Just by the costumes, the 70's haircuts, and cheesy special effects, I knew i had found quite a little jewel there.
You get Stella Starr (played by Catherine Munro), the best starpilot in the whole galaxy, and Akton, the pseudo-jedi wannabe, who are engaged by the king of all galaxy to find is own son, whom he sent in a suicidal mission against Count Zarth and find anything he could about the most dangerous weapon in the whole universe: The Lava Cannon, or something like that.
I will not review the entire movie, but here's a few points just as appetizers:
1. You can go out in space without a suit, and swim through by keeping your breath.
2. Jedi decide where and when to die, no matter what.
3. You can throw big missile in space through windows with soldiers in it, and have no effects of decompression.
4. If your a galactic babe, always wear sexy bikinis and take Charlie's Angels poses, you'll be in the spotlight.
5. Portraying the son of the emperor, David Hasselhoff! (Now that's hilarious) 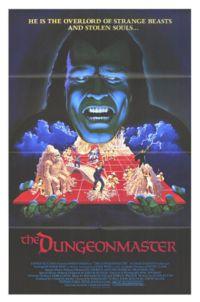 Oh boyyyyyy, that's one messed-up one. Story so far: Lucifer, aka Mestema, like to diverts himself by imposing stupid trials to mortals. The one he decides to piss off (and us by the same occasion) his Paul, a sportive nerd who can run 3 km in 5 minutes. Paul must save his girlfriend, and to aid him, Excalibr8, a computer no more powerfull than a 3-85, who can speak and shoot blue lasers.
When we arrive to the trials, that's when we embark for one hell of a ride.
Here's some:
1. Dwarfs steals his arm computer, and Paul must retrieve it from a giant golem a la The incredible voyage of Sinbad.
2. Paul confronts a little muppet-for-demon after killing a few zombies. He must answer a stupid riddle that seems taken from an old 50's tv show.
3. He arrives at a hard-rock concert, and must kill the musicians to follow his girlfriend to the next stage.
4. He founds himself confronting an ape-like demon who amuse itself by throwing rocks. Paul makes the roof fall upon it. It reverts to an angel who thanks him for freeing her. (Duh.....)
5. I lost a point somewhere in the movie, i think i slumbered a little, but he was now in a Madmax look-alike movie, except more shitty, and his girl was shooting at the other cars.

Was there an explanation for all this non-sense? No, there was none. One guy from another review explained it that way, and I though that made some sense:

Take a room with 12-20 persons and ask them to each write a part of a movie. Now mix that alltogether,adding a few lines make everything fit as possible, and you'll get Mestema: The Dungeon Master

Well, enough said, that really the feeling I got watching this crap...

1. Last one and not the least: House of the dead 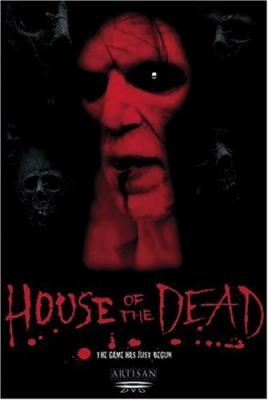 Normally i'm a big fan of zombie movies. Old ones that is, the recent Resident Evil crap left a bittersweet taste in my mouth, but I will not be reviewing those. (I do found some new ones quite appealing though, like 28 days later, Dawn of the dead remake and so on.)

Oh my god. What can i say. All i hate about today's movies is in this very title. Bad special effects, acting, story, atmosphere...well pretty much everything about it.
The producers though it was a good idea to include sceneries from the actual game between two frames of the movie. Result: No word can describe it except all the worst adjectives in all the vocabulary from all existent language.
Do you find that normal, that morons with iconic stereotypes and shitty dialogs (who mourn their dead twenty minutes after they died), transforms into bloodthirty gunslingers? Hey, there're supposed to be people like you and me. Does that mean I can dodge an axe flying at me, while jumping in a 360 camera effect, all of that while I shoot with a .12 gauge pumped action gun, making a bulleyes shoot, and not be affected by the gun's backfire?
Add free tits shots, big heavy metal music, kung-fu choregraphied fights.
Oh, and the best one: The winner for the best dumbest idea in all zombie movie ever;
When you're surrounded by an army of bloodthirsty zombies with axes, the best way to secure yourself is to rush to the central cabin in the middle of the island (Stronghold of the zombies), and shoot like crazy in all the hordes.

Well that's all for today. 5
Wizer
5 Nes games of shame
My top five nes games that were bad back then... 11
Caps_2-0
Holding Patterns...
The style and sound may change, but somehow, the entertainment lives on. 8
timbox129reloaded
Dreams to Dream: The Songs and Voices of Cathy Cavadini
Exploring the underrated voice artist, actress, and singer who is most famous for giving us The Powerpuff Girls' Blossom's original voice. 36
knuclear200x
Crossover Chaos!!!
A list of some of history's memorable get-togethers before the year 2000...
More Articles
Related Commercials