My top five nes games that were bad back then...
By Wizer
On
Ahhhhh...those were the golden years.

Times where you bought a cartridge of video game, and if it sucked, well...you just had to deal with it, cause nobody's would give your 85$ back.
Sometimes the disappointment would be so great, you would rather hit the damn ****ing thing with a baseball bat, and that wouldn't be enough to get rid of it (Damn these things were tough compared to the ones nowadays...).

Well, here's my top five list of games so shitty, that even your nes entertainment system cried for infamy. 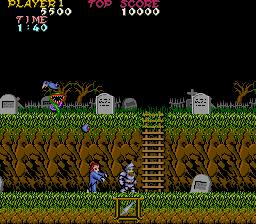 Well, the game wasn't so bad in itself. I must say I enjoyed beatin' the crap out zombies and demons. The story wouldn't beat a classical movie script (...on second thought, its does now...Oh come on, just look at that movie: House of the dead.), but was ok enough I guess to start a new adventure has a puny little knight in boxers.
The only thing that annoyed me: DAMN WAS IT [email protected]!!!!!
Only two hits, and bang! you're dead meat, rotten flesh eaten to the bones by maggots, cannon-fodder, bantha-poodoo, or whatever expression used in this kind of situation.
Never managed to go past level 3 when i was young, and now...well have better games to play with.; P 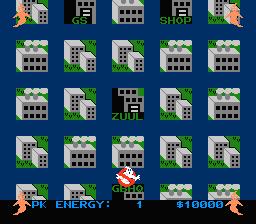 Man, did I loved the movies. Good old 80's movies. Times of innocence. Times of imagination...and times of crappy movie-to-games.
Just look at the screen. Should have been a 2D side-scroller.
Instead you get this: Buy stuff to capture ghosts, go around the city to find some, capture them, earn money to buy other stuff to capture ghosts, oh don't forget gas this time, earn more money, buy more goddamn equipment to bait more dead, capture them...and so on.
Ultimately, you would get opportunity to enter the ZUUL building (note here: In the movie, it's was GOZER the ultimate ennemy, ZUUL was the doormaster.).
Not only did the graphics ****, but gameplay was pretty lame, repetitive. After thirty minutes of this, you would be brainwashed for the rest of the day...even be pissed of by the movies. 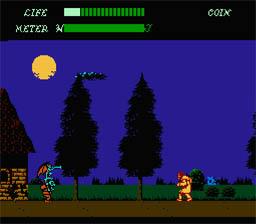 Lookin' at this one, I'm askin' myself two questions; what did the creators smoke when they designed this, and second: what's the address of their dealer.
You control Dr.Jekyll (obviously), armed with your thrusty wooden cheap cane that cannot even beat the crap out of a young child, and must make your way across town, avoiding everyone and traps set in your way. If not, you revert into Mr.Hyde, and all change for the worst, and when I say the worst, it's litterally the worst.
I don't quite know what Jekyll did to piss off everybody, but after playing 2 minutes of this, you'll be ready to take side with the town. So clumsy, so weak, I even wonder if he's a least trying to survive.
Well, when your hit points are down, night falls, and becomes Mr.Hyde. Now all is dark, flying skulls and spiders everywhere. And suddenly, OHMYGODIMONFIRE! a lightning bolt crashes on you.
The way I figured it out, you have a meter at the base of your screen; the more you manage to survive in town, the more likely you'll have a chance surviving the Hyde form, cause if you reach the beginning point, you're dead.
Man, that's just ****ing great concept isn't it?
2. Total recall 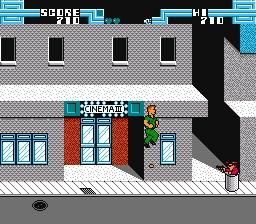 Ironically, that's one I don't want to remember. Another crappy movie-to-game that enraged my childhood.
Ahnold (intentionnaly I prononced without the ), slick in is kaky outfit, battle is way around town, fighting midgets who kicks him in the nuts, and firegunning mobsters. Controls so bad, one of those midget could kick your ass.
Graphics aren't so bad, but not gorgeous too. Sound repetitive, that's pretty much what I can say about it. Supposedly, the game follows the movie step by step...well, never managed to find enough patience goin' through this piece of ****.

1. Dragonlance: Heroes of the Lance 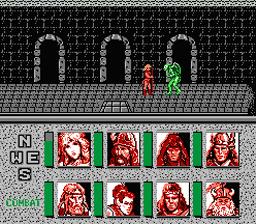 This one only played it on rom form...and glad i did. This may be one of the most poorly designed game ever played. Sloppy controls, you mashed like crazy to get the characters jumping of fighting, but most of your team would jump by themselves in the pit just at the beginning. Looking at that, I quite understand them. Being trapped in a shitty game myself for all eternity, I would rather kill myself than goin' through this pain in the ass quest.
Each character has is own habilities: Raistlin the red mage can float over chasm a short period of time and die by one hit of a sword; Goldmoon has priest spells, allowing you to survive your fallen comrades (but if you have a bit of respect and dignity for them, just let them rest in peace, it would be better for their sakes) and heal them; Caramon, Sturm, Tanis and Riverwind, warriors...well that's pretty much what I can say about them; Flint, another warrior, except he's a dwarf; and not the least, Tasslehoff, who can disable traps...****king great, the time you disable one, a bald midget has time to kick yo ass.
In resume, if you like a game with a great adventure but poor controls, puke graphics, and have no sense of self-respect for yourself at all...well, that's a game for you.

I pretty much know there's others games that made you tear your hair out your head back in those days, but I haven't played them. Some of my friends talked to me about Karate Kid, Back to the Future, and pretty much any games that were on Action 52. 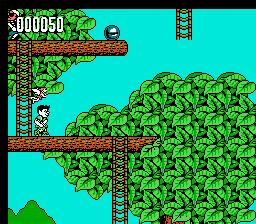 I can basically say that any game made by Ocean sucked *** back then. This one, I bought it used. Thank god, 10$ wasted only. Well, you incarn Peter Pan...huh, well, seems to be that, except he fights with a butter knife and wears green thights just like the real one...Oh gawd try to be a great hero wearing thights, and you'll get my point.
Everything is so childish in this game. Flying gurus, pearls-shooting clams, random single-looking pirates, grumpy snowmen, generic flying ghosts are just a little bit of the wonders you''ll come across.
If you didn't manage to brake your tv set with your controller after fifteen minutes, well, my friend, you got nerves of steel.

And that's for my first article, hope you enjoyed it. 29
Jake_1079
Top 10 old school RPGs
A list of some of the best role playing adventures to hit the gaming world.
-10
NintendoPower
Top 10 BEST/WORST Box Arts
A look at some great/bad artwork on video game covers 33
JSwiftX
The Video Games of 1991
The Good, The Bad, The WTF
More Articles
An unhandled error has occurred. Reload Dismiss