The Best of Humongous's Games

Can I eat the cheese?
By ethandaman24
On 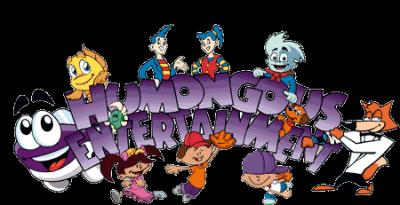 Hey everybody it's Ethan back another article for your enjoyment. Before we played those annoying internet games, and I MEAN annoying, we played children's software games. My most favorite software games were the games produced by Humongous. They had the most awesome games ever and I loved playing them, I'd play them nearly everyday and I'd never get tired of them. I'm not going to talk about every game produced by them, only certain games, mainly the games I had. Unfortunately someone already did an article on this, but that person didn't finish the article and it only told about the game series. So scroll through and enjoy the best of Humongous's games, and feel free to correct me if I have any grammer erroars. 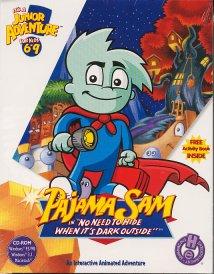 Let me start with this, Pajama Sam was in my opinion, the best software game series of Humongous and one best software games that I ever played. I mean it's just fun going in all these different places and clicking on the Easter eggs, this game had a hell lot of Easter eggs in each place you go. Here's the game plot: Sam is going to sleep with all the lights out, but he's afraid of darkness that lies in his closet. So he plans to capture him in his lunchbox. He then gets his pajama man mask, his pajama man lunchbox, his flash light, and the rest of his shit. After that he goes into his closet, goes through a warp hole, and lands into the land of darkness. Unfortunately he gets caught in a trap-rope where a bunch of talking trees takes away all of his stuff because they think it's dangerous. So now he has go all over this strange world to find his stuff to capture darkness. I'm not going to give away too much info so let me make this quick, he meets a bunch emo friends such as Otto the talking boat, talking game show host doors, a talking carrot, mud the talking mine wagon, and some others. After he gets all of his stuff, he goes to capture darkness. When he gets to him, he's nervous at first, but it turns out he's not scary at all, he likes to play games. So they play awhile and Pajama Sam gets back home. I give this game 9/10. 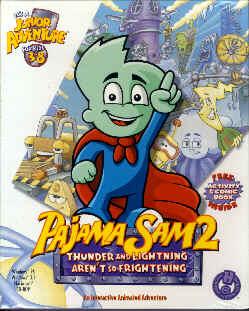 Pajama Sam 2 was a fine game as well, but I never got to beat the game, I think. Here's how the plot goes: Sam isn't only afraid of the dark, but he's afraid of thunder and lighting. He wants to put a stop to this. So he goes to his attic door, which actually leads up to the clouds, strange. He goes to "World Wide Weather" but he can't get in because he's not an employee. So he gets through by hiding in a box and some tractor thing picks up the box and gets him inside. He gets to the main weather room which is controlled by a calm thunder cloud and a crazy lighting bolt, and I MEAN crazy. Unfortunately he trips on his cape and lands on the red button that messes up all the weather in the world, and to fix it, he has to find all the missing pieces that controls the weather. So after hours of finding the pieces and meeting people that aren't emo, he fixes the weather of the world and live happily ever after, OR DO THEY? The cloud and bolt let him work the weather machine and at the end, you hear a KABOOM, and then nothing else happens. I give this game an 8.7/10 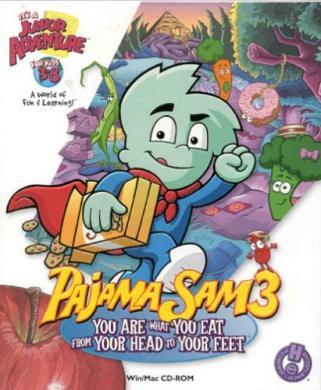 Pajamama Sam 3 was a difficult game for me, I don't remember ever beating this game. Here's the plot of the game: We find Sam in his room eating a pack cookies to get boxtabs for something I can't remember what. The cookies suddenly escape from the box and Sam follows the cookies. They get into the pantry, Sam goes inside, the door shuts, it's dark, and the cookies takes him away. He lands into a party for him, which there he sees all talking junk food. He stays there for awhile, until he tells everyone that he has to go home for DINNER, and the junk food get pissed, but it isn't until he says about the broccoli part of the meal, that they decide to put him in jail. In jail, he meets a talking lady broccoli, that was also sent in there. After breaking a candy cane jail cell and throwing a bon bon at the key, they finally escape. He and the broccoli are blocked off by sweet tubes, but the broccoli is able to get to the food pyramid. When Sam gets to the food pyramid, he finds the talking carrot he met in the first game. He tells Sam that the island is on war with the junk food, so the carrot tells Sam to get the other people to the peace conference. After getting all the people needed to the peace conference and after meeting a talking doughnut, the walking egg from Garfield and Friends, a depressed librarian, 3 whatever plumbers, and a bunch others, everyone has now made it to the peace conference. Unfortunately, they start arguing of what food group is better and it all turns into a riot. Then Sam (dun dun DUUUUUN) teaches them a lesson and cooperation. He teaches them that "no food is an island" because some different foods go together. The general then declares peace for the island. Then at the absolute end, Sam forgets that he has to go home for DINNER, and then it ends the game. Due to the lesson learning and dull ending, I give it an 8.2/10 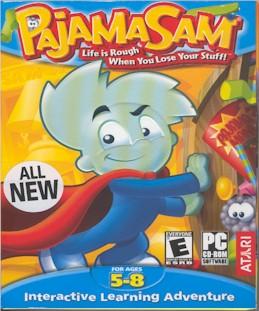 I never knew there was a Pajama Sam 4, until recently. From what I heard about this game I can put it in 3 words, ABSOLUTE TOTAL CRAP, end of story. 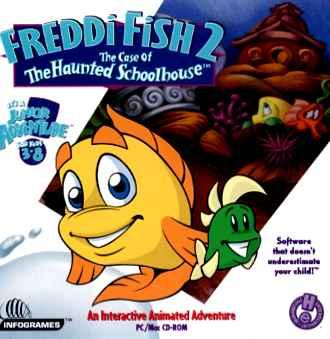 Freddi Fish (game series) in my opinion was a bit more for younger kids. Probably because it takes place in the ocean, and young children do love ocean related stuff. Here's the plot: Freddi and Luther are getting ready to go to school. Luther has his Codfish Commando action figure for show and tell. Before they get to school, they sing about how much they're excited to learn from school (send me to hell). So they get to school, but the guppies are all hiding because they think the school haunted by a ghost. The ghost finally appears as it takes Luther's action figure. He and Freddi go looking for the ghost, and when they find it, Luther gets his action figure back, but it leaves a tear from the ghost suit as they realize this ghost isn't a ghost (like I wouldn't expect that). So they decide to make a trap to figure out who the ghost is. So they go off to get the items needed for the trap. After getting all the shit they need and meeting a drug dealer, a shop-owner, an annoying singing electric eel, and other fags, they're finally able to make the trap. When the ghost comes, they get caught into the trap and when they're caught, the fish in the ghost suit are 2 sharks that have to obey their squid father by taking away all the toys from the guppies. Luther decides to make a sacrifice by giving away his Codfish Commando action figure to the sharks. So they get back to class and the day is saved. This game gets an 7.9/10. 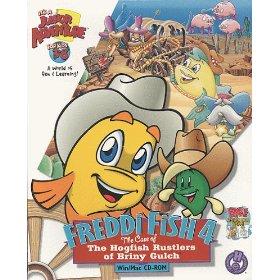 Okay, I seriously don't have the patience of going through this whole game, so I'm just going to plagiarize: Freddi and Luther (upon arrival at Freddi's Cousin Calico's Ranch) come to find out that her hogfish have been rustled. (which in Calico's way means "someone came in and took them without asking.") Luther and Freddi head to the town square, in search of clues to find the rustlers. While in Saltwater Stella's Soda Saloon, they stumble upon their first clue - a note with a secret combination on it. Freddi and Luther figure this must be important, so they must investigate where the combination is. After checking the town square out a bit (or getting some help from Saltwater Stella) they find an abandoned ship with a huge lock on the metal door and a combination required. After entering the combination, they meet up with the first rustler, a slim fish dressed in 'what the well dressed rustlers are wearing.' He then says since Freddi and Luther aren't wearing these things, they mustn't be rustlers. The rustlers are seriously fashion-cautious, so they won't accept Freddi and Luther until they have the proper attire. Freddi and Luther must search all over in order to find a ten gallon hat, (dyed a different color each game) a belt and a belt buckle, (different letter each game) and either a bandana or a handkerchief accessory. Then, they can get in in order to liberate the hogfish. Finally, Luther and Freddi need to find out who the mysterious Mr. Big is. (Mr. Big could be anyone of the townsfolk who had the idea of hog-napping) In the end, the rustlers get to get their dream job - hogfish ranching. (they are now helping out at Cousin Calico's Ranch) During the credits, Freddi Fish and Luther sing "Home On The Range." This game, if I can recall the last time I played it, gets a 7.9/10.


So there you have it. Some of these games were fun, weird, and stupid all at the same time, but I still enjoy them, even though I haven't played these games in years. Even though I was still on the internet at the time I played these games, there wasn't much to do on the web back then. There wasn't any Youtube, Retro Junk, or Facebook at all. When I was bored on the computer, these games would cure my boredom, and I thank them for that. So this is Ethan signing off, and remember, no need to hide when it's dark outside.
7
Login To Vote!
More Articles From ethandaman24 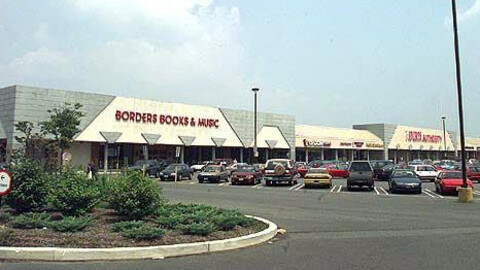 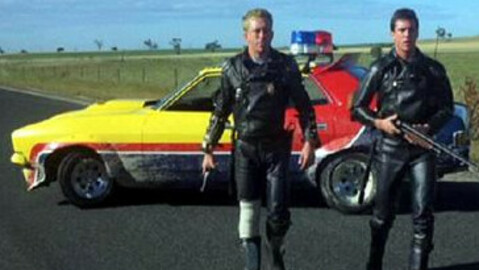 2
Daniel85
Buy Our Stuff, True Believers!
All your favourite Marvel Heroes doing what they do best- selling out!
An unhandled error has occurred. Reload Dismiss