Packard Bell; these machines are quiet a nostalgia trip, as well as my very first PC.
By Roadgeek
On

Gosh, I'll bet it's been a year or more since I last did a Retro Junk article. Well, I guess my silence is over, haha.

Also, this will hopefully be the first of an article series known as "Retroputing", where we will take a look at vintage computing.

Ever since I was 5 years old, I have always loved computers. It all started sometime around the summer of 1995 when my aunt introduced me to her Gateway 2000 running MS-DOS 6.22 & Windows for Workgroups 3.11. There was something extremely moving about this thing called a "computer". I had heard the term before, but never knew what it was. Was it a machine that would eat me alive? (I seriously did think that). Boy, was I obviously wrong. 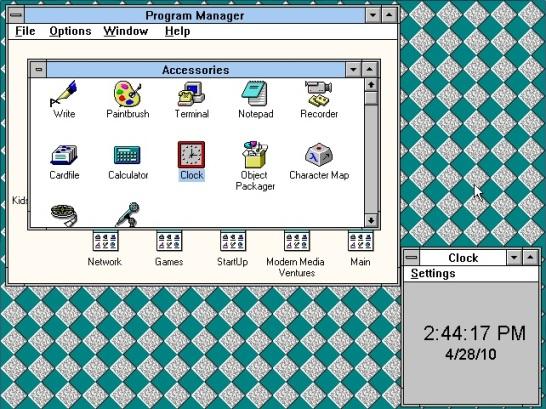 At age 5, I was just shocked at how amazing this computer thing was. I couldn't get over how you could just press a button on something called a "mouse", and the computer reacted to the click. That screenshot, by the way, was taken on my copy of the "DOSBox" emulator, a multi-platform DOS emulator I have on my Windows 7 computer. 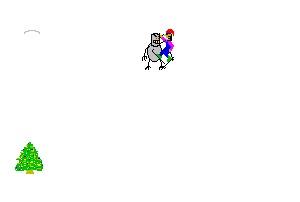 My aunt and I played various computer games such as Sierra's Mixed Up Mother Goose, Freddi Fish, and a Microsoft game known as "SkiFree" where a monster would randomly eat you as you ski down a mountain. Look at those graphics! World of Warcraft, eat your heart out.

In the fall of 1995, shortly after I started kindergarten, my dad decided it was time we needed our own computer. I remember him doing a lot of research on computers, since he had never owned one before.

In early December 1995, my dad finally found the perfect computer. It was a little pricey, nearly $3,000, but he really liked this one. I remember that rainy Wednesday he bought it. I had just turned 6 and I desperately wanted to go with my dad to pick the computer up. But I was bedridden with a stomach bug and was stuck in bed watching reruns of The Flintstones on Cartoon Network. Okay, maybe it wasn't so bad, haha.

That evening, my dad returned home from Best Buy with tons of heavy boxes with the Packard Bell logo plastered all over them. It was a Packard Bell Legend 822CDTW Multimedia Minitower Computer. I vividly remember getting up out of bed every 10 minutes or so to watch my dad set the computer up. 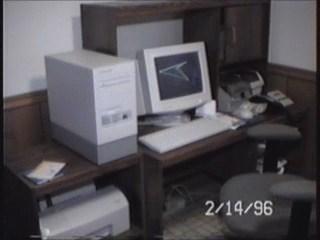 Well the magic moment arrived. The computer was all set up, ready to be turned on at any moment. It looked so new and beautiful. Little did I know how much of an affect this computer would have on my life. The above picture is from a February 14, 1996 home video of my original Packard Bell.

It was now time to finally fire this beast up. Keep in mind that up until this point, the only OS I was familiar with was Windows 3.11 on my aunt's Gateway 2000. So when the desktop popped up, I was shocked at the completely revamped interface. What's a "Start Menu" and "My Computer"? This was also the evening I was introduced to my friend... 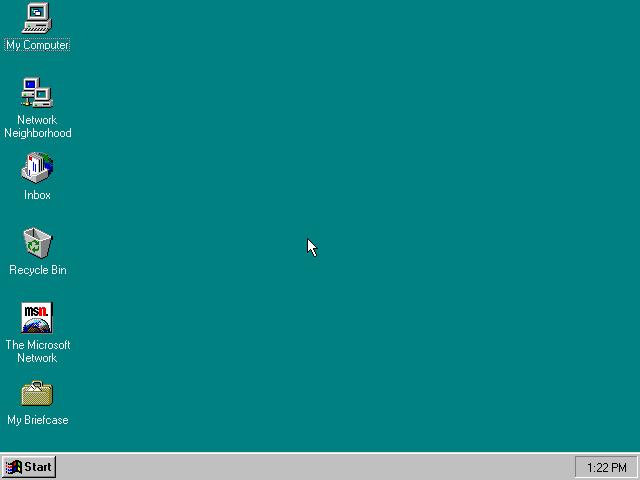 So this is that new version of Windows known as "Windows 95" I've been hearing so much about? It took some time for me to get used to the new interface, but pretty soon, I became a Windows 95 fan for life. To this day, Windows 95 has remained my favorite "Old School OS".

And Most Importantly:
Packard Bell Navigator 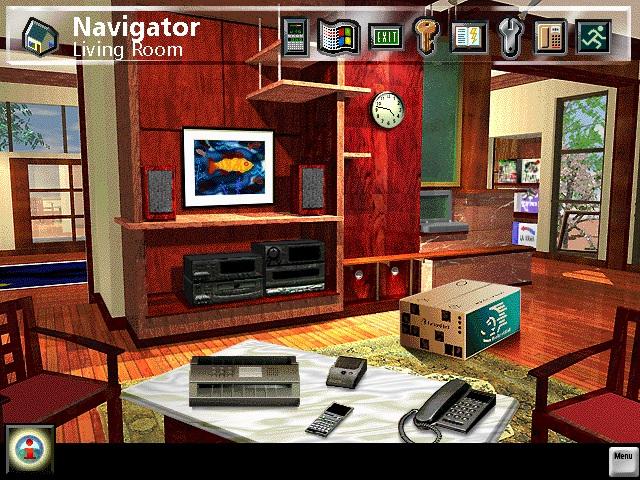 If you didn't fall asleep reading that long list of software, let's take a look at Packard Bell Navigator. Packard Bell Navigator was an alternate interface for people who hadn't gotten used to the Microsoft Windows interface just yet. Navigator used a "house" interface that allowed you to click on objects throughout this virtual house which would activate various programs. For people who are familiar with the software flop "Microsoft BOB", it was very similar to BOB. The above picture shows the Navigator Living Room. This room contained the various multimedia programs included on the Packard Bell computer, such as the audio CD player, MIDI player, and the fax machine components 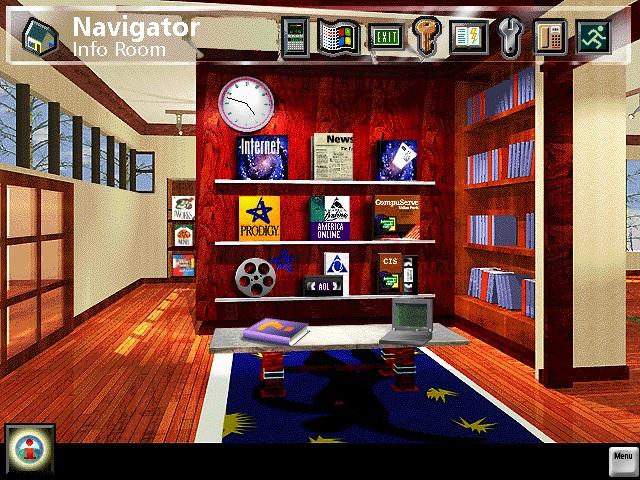 This is Navigator's Info Room. It included all the computer documentations, manuals, and tutorials. When you put the Navigator CD into the CD-ROM drive, you can access various tutorials. Yes, believe it or not, there was actually a tutorial that teaches you how to use the mouse. Also included in the info room is access to online services included with the computer, such as America Online, CompuServe, and Prodigy. 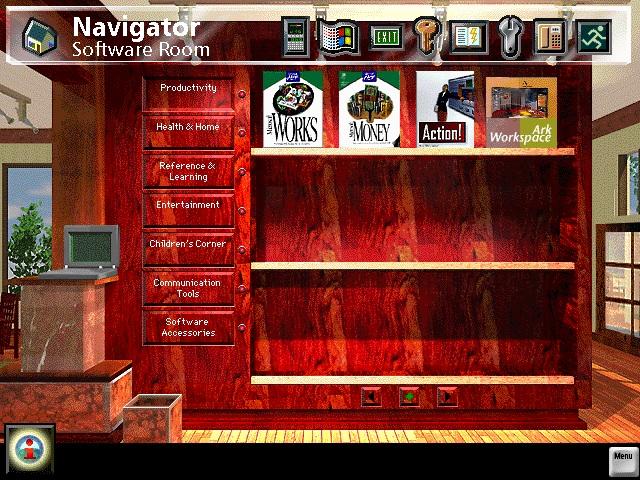 This is Navigator's Software Room. As the title suggests, it included access to all the pre-installed software I mentioned earlier. It was also possible to add shortcuts to software you installed on the computer. However, these links looked rather ugly looking on the bookcase shown in this picture. 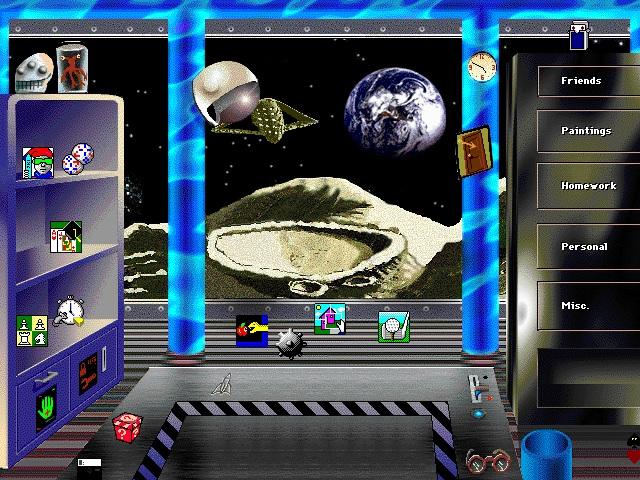 Here's a bonus. This is Ark Kidspace, an interface included with Packard Bell Navigator designed for kids. There are two different themes; space & the jungle. This is the space theme, which is the default theme.

As I mentioned earlier, Packard Bell computers came bundled with enough software to fill an airport with. Besides Navigator, there were four children's computer games that particularly stick out in my mind. 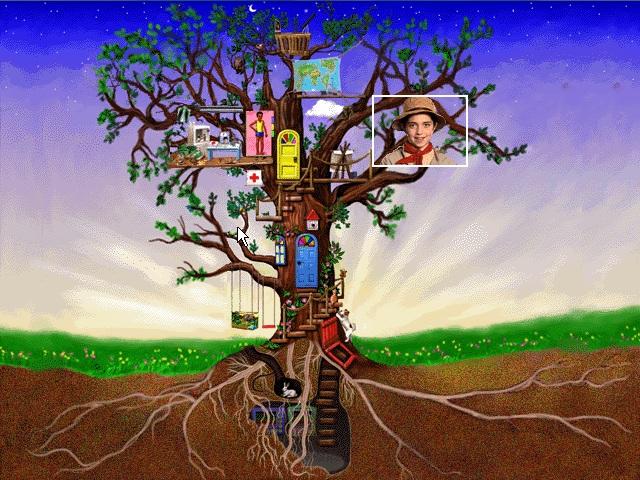 My First Encyclopedia was a game produced by Broderbund Software which included an interface in the form of a giant tree with particular rooms to explore, such as a kitchen, observatory, art room, and a transportation room. Whenever you'd click an item in one of these rooms, a window would pop up displaying a video of various kids, who look very stereotypical '90s, explaining what the item you just clicked on does. There were also various activities such as a puzzle game and a very cool paint program. Also included on the same CD was a Spiderman Cartoon Maker, where you could make animated Spiderman cartoons. It was a very cool program, but I could never figure out how to animate anything. 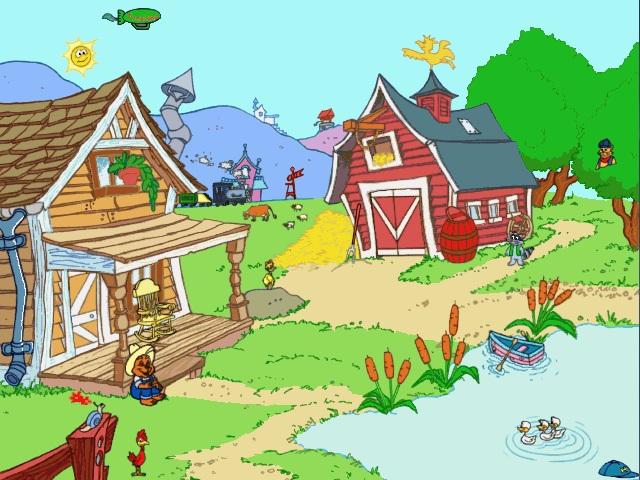 Tuneland was another interesting game. This was a point and click based game starring a tiny yellow bear voiced by Howie Mandel. It took place on "Old McDonald's Farm". On this farm, he had a (If you thought I was going to sing to you, forget it!). There was really no plot to this game. All you did was just explore the farm and interact with various animals. But it was still a pretty fun game.

There was also another CD-ROM disc which included the "Kidstory Series". This included two storybook games, "Milly Fitzwilly's Mouse Catcher" and "The Pirate Who Wouldn't Wash". Interestingly, Active Imagination, the company that made the Kidstory games, was a Packard Bell company. 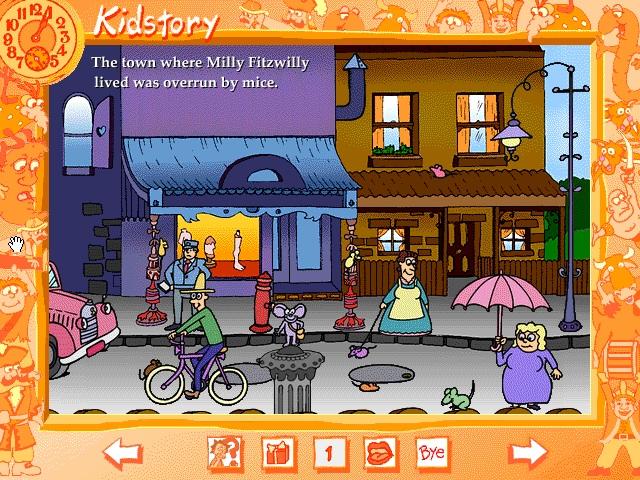 Milly Fitzwilly's Mouse Catcher involved a town overrun by mice. The story revolves around a fancy old lady named Milly Fitzwilly who decided to do something about this serious issue. She hired a bunch of guys who built various devices to trap the mice, mostly Rube Goldberg devices. 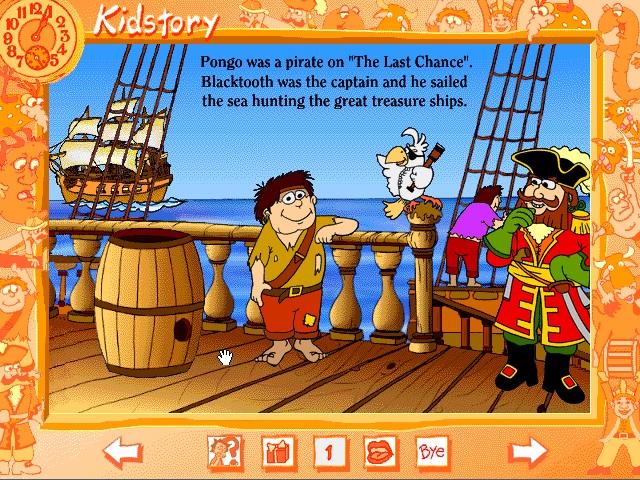 My personal favorite Kidstory game was "The Pirate Who Wouldn't Wash", because there's nothing funnier than a stinky guy on a ship in the middle of the ocean. This story involved a dirty pirate who had to deal with his ship crew that ridiculed him nonstop for his rancidness. I think there's a gas station in my town run by a guy who resembles this pirate. 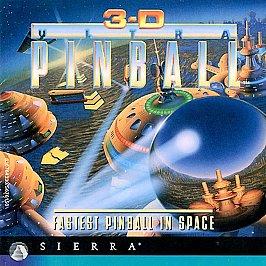 The first non-Packard Bell bundled game I remember getting was purchased the day after we got that original Packard Bell. My dad brought home a Sierra game called "3D Ultra Pinball". It was a fun pinball related game consisting of 3 tables. For what it's worth, since I was a kid, I've always had an interest in pinball games/machines. I remember my dad always had a pinball machine at his convenience store. Good times. 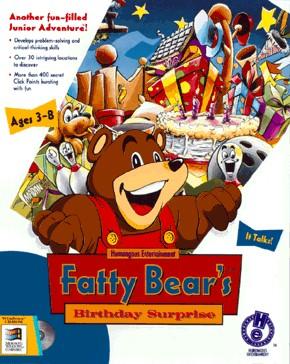 As 1996 arrived, I continued to collect a ton of fun computer games, many of which I still own. I played a ton of Humongous Entertainment games such as Putt-Putt, Fatty Bear, and Freddi Fish. These were very popular games back in the '90s, although I will admit my interest mainly lies in the earlier Humongous titles such as Putt-Putt Joins the Parade and Fatty Bear's Birthday Surprise. More on Humongous Entertainment to come in a later article. Believe me, these games need their own article to hold all the amazement. 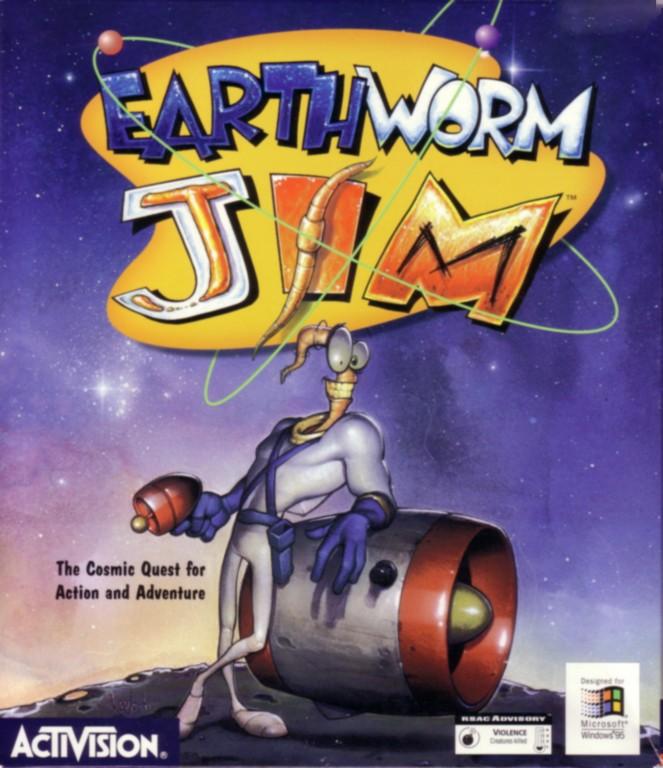 Probably one of my all time favorite games I ever played on my Packard Bell was Earthworm Jim. As you may already know, Earthworm Jim first appeared on the Super Nintendo in 1994. Shortly thereafter, the original Earthworm Jim video game was remade into "Earthworm Jim Special Edition" which was first released on SegaCD in 1995, which included CD quality audio tracks, an added level, and added power-ups. This same version was also released for Windows 95 also in 1995. I first started playing it in 1996 and I have been a fan ever since. Again, I may have to save this one for another article.

In early 1996, my dad signed up an account with America Online. This was my introduction to this revolutionary thing called "Internet". Keep in mind though that it took quite awhile for me to start exploring websites. In the first few months of my time with America Online, I mainly hung around the AOL Channels and sent/received e-mail. Speaking of early Internet, remember this guy? 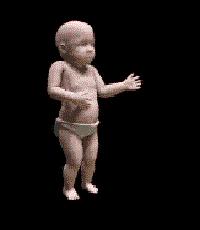 In early 2005, the nostalgia bug bit me for the first time in my life. Keep in mind that early 2005 was when I first started my '90s nostalgia interests. I was 15 and I needed to recapture my youth. I opened an Internet account with eBay and I purchased a 1996 model Packard Bell Legend 1510 Supreme for $70. 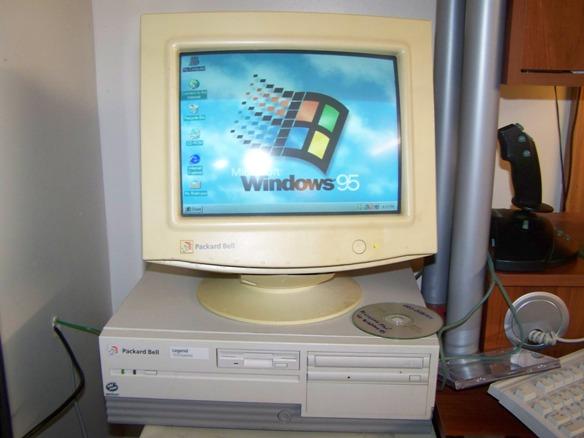 As of 2010, this Packard Bell is still running just fine. It includes all the software the original Packard Bell had, including My First Encyclopedia, Tuneland, Milly Fitzwilly's Mouse Catcher, and The Pirate Who Wouldn't Wash. And yes, Navigator is also on there. The above picture of my Packard Bell Legend 15010 Supreme was taken on July 2, 2010.

I mentioned earlier that Windows 95 is my favorite old school operating system. Well that is a fact. I do realize that Windows 95 gets ridiculed a great deal for its instability, but Windows 95 was what made me a fan of computers in the first place. In fact, I rate it higher than Windows 98. But keep in mind that's just my opinion.

If you would like to watch a video of me at age 6 playing Earthworm Jim on my original Packard Bell in 1996, please go to this YouTube address:
http://www.youtube.com/watch?v=VVo2t5FfndE

If you would like to watch a video tour of my current Packard Bell, the Packard Bell Legend 1510 Supreme, please go to this YouTube address:
http://www.youtube.com/watch?v=zGM6_ZrQyzc

If you would like to watch a video tour of Packard Bell Navigator, please go to this YouTube address:
http://www.youtube.com/watch?v=nqZpvOPI_aI 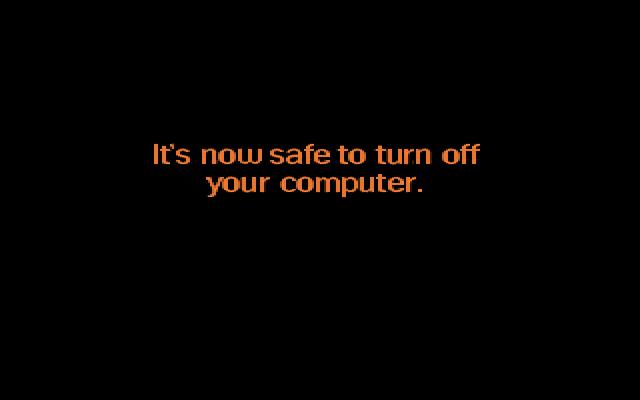