The Ren and Stimpy Show

Ren and Stimpy had gone downhill since 1993.
By renandstimpydied
On

A bunch of people have always said, “Nickelodeon has gone downhill ever since CatDog 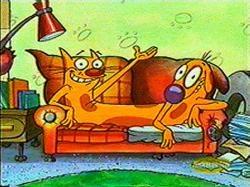 premiered in 1998”. I’d say its best stuff had started to go downhill ever since 1993. The year after John Kricfalusi was fired by Nickelodeon, and The Ren and Stimpy Show's cleverness was already starting to decline. For example…… 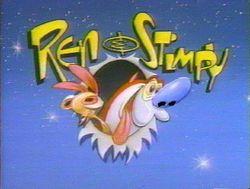 When Ren and Stimpy debuted in 1991, the same year the internet started and the Genesis picked up popularity after the blue haired hedgehog, Sonic, 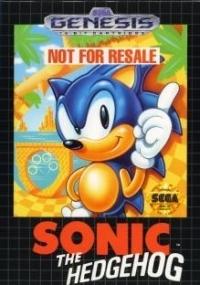 was introduced to the world, it made a mark in the cartoon hall of fame, something no cartoon had done for the past 30 years. It’s amazing music and voices, cultural references and quality animation picked up on everybody. Not to mention it was the funniest thing on any other kid’s network. And that, my friends, is exactly what angered Nickelodeon.

(How he sold the 'The Ren & Stimpy Show' to Nickelodeon): "I tricked 'em! I told 'em it was going to be unfunny; that it would be wiggly lines, nobody would be able to follow the stories, and nobody could identify with the characters. And they said, `Oh! That's exactly what we want!' And I totally lied." John Kricfalusi

See my point? Kricfalusi admitted himself that Nick wanted their shows to suck. They just don’t get it that most children don’t mind clever stuff. The only reason ratings are still good with today’s crummy programming is that all that kids are used to. Every time something clever comes along the lines, they try as hard as they can to cancel it, or at least convince the writers and storyboard artist to dumb the heck out of it. They want everything to make sense, and everything to be something that kids want, even though they would actually treasure the funny stuff. What Ren and Stimpy did was insane. 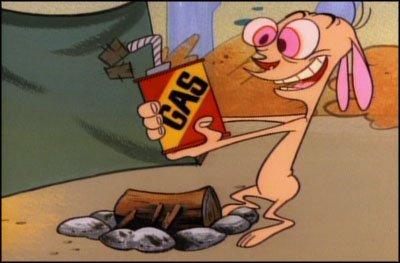 A cartoon should be insane. A Cartoon should be funny. A cartoon should have good animation, good voices, good jokes,and good characters with distinct original personalities. Ren and Stimpy excelled in all these qualities. Their story plots and gags were insane. Not only were there jokes funny, but they were so unpredictable and happened when you least expected it. Besides a couple episodes in the first season, their animation was extraordinarily good. It was so cool. The color was right, the timing and poses were correct... EVERYTHING WAS GREAT!!! Ren and Stimpy personalities were so distinct and original. Ren is a angry guy who is very feeble and when he tries to hurt someone(besides stimpy) he can't because he's so feeble and that just makes him angry. His voice went perfect with the jerk he was, although when Kricfalusi had to stop, Billy West didn't do a great job without John K.'s strict direction. Stimpy is a fat bloated idiot who has one and only nerve ending where he likes to get slapped at (especially by Ren) because he thinks it is a sign of affection. If you hit him just hard enough he'll like you forever. Sometimes Stimpy's character doesn't make any sense because he acts like a stupid child, yet sometimes he can be smart enough to invent a happy helmet and he even has a Jewish man's deep voice sometimes(not after Kricfalusi left actually) , but who cares, because that only adds to the brilliance of the show.I loved watching Ren and Stimpy as a kid because it was better then anything on at the time. That's why Nickelodeon started a war with it. 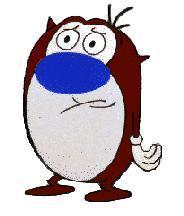 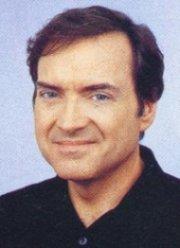 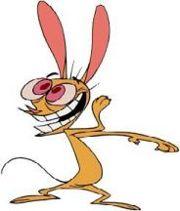 
The censorship of his work on the "Nickelodeon" kids network): "The main thing is that they never understood the show. Even the basics. I'm not talking about the outrageous stuff. Just talking about things like "Well, we'd like to do a cartoon with Ren and Stimpy in space." The response was, "What do you mean in space? How could they get in space? 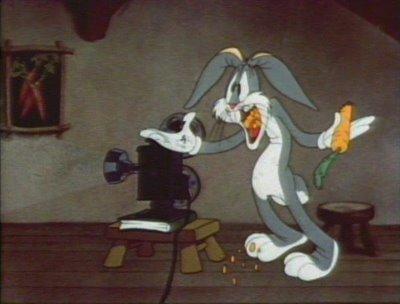 " Well, I'd say, "They're just in space in this cartoon." "That doesn't make any sense," they'd reply. "How will the kids understand it?" Well, I'd ask, "Haven't you people ever watched cartoons before? Sometimes Bugs Bunny's in space, sometimes he's a caveman, sometimes he's in a forest. It's a cartoon." They never quite got that." John Kricfalusi


One thing Nickelodeon did to mess up the show was to give it a bad reputation. I don't just mean after the second season, but pretty much ever since the show started. They made a bunch of gross closeups that nobody liked.Yet they didn't even have that many. But the Nickelodeon Executives allowed him to have a bunch of crap jokes, and not as much as cartoony freedom. I'm sure had they let Kricfalusi have more cartoony freedom, those gross closeups would've been taken away, and the show would've been even better(IMAGINE THAT!) but they didn't want it to be. They didn't do a very good job, but they made a little progress every once in awhile.You could tell just a little bit more in the first season, because there were a couple filler segments, yet those were even good, just not as good as the non filler.But they hated him. They had so many more crap jokes in the seasons 3,4, and 5 but and the few they had in the first season were kind of funny. But they reran the first two seasons also during the time of the later seasons, so it gave a bad reputation to the whole project. Not to mention the episode delay. They constantly edited episodes that didn't not to be edited(yet they never would edit the crummy Bob Camp episodes who didn't want it as much. John K. and Bob camp(the treason man) were complete opposites). Then they'd chastise them to the public that they didn't get the 13 promised episodes (which was their own fault). Thank goodness for Carbunkle Cartoons, or the second season would have been crappyily animated too. Carbunkle Cartoons(a co-animation team for Ren and Stimpy) finished those up, and then left the show.(I wonder what it would've been like if they stayed. But I'm getting off topic here.)

"when my family watched it the first time my brothers saw ad just laughed their heads off. i think they watched about 30 times before they finally finished the episode." rodanelcoolio on youtube.com

I didn't watch Ren and Stimpy very long when season 3 debuted. Probably for a couple months, but after that I couldn't take the cartoon much longer. I didn't think about collecting any merchandise after this. I just wanted to stop watching it forever when the really bad episodes came around. Some of the really bland and boring ones make you want to just sit around and doing nothing.But not in a relaxing way like opium.At least their is one better thing about that killer drug then those crappy seasons. Well anyway, the most you can do for Ren and Stimpy classics is buy the DVD set. Please support the best cartoon of my youth.

Nickelodeon, why did you have to ruin one of your only good shows?

It's weird, it actually turned from the best cartoon to the worst.
Kind of like Happy Days! 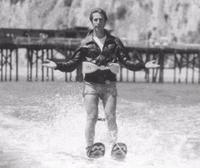 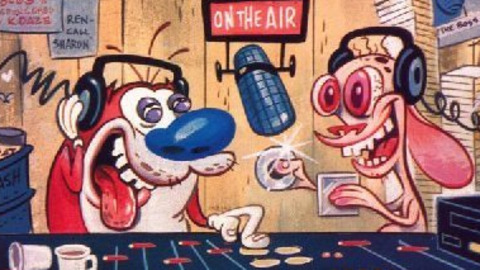 16
retroguy78
Nicktoons Anniversary
It has been 15 years and I feel like commemorating the birth of Nicktoons. 23
RetroToon
The Nicktoon Creators Part 2
A look at the people behind the very first Nicktoons and their many projects to follow.
More Articles
Related Commercials