It has been 15 years and I feel like commemorating the birth of Nicktoons.
By retroguy78
On 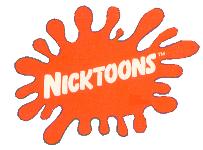 Doug-The show about a pre-adolescent boy and his adventures in fictional Bluffington.

Doug was my role model at 8 years old in 1991. If it hadn't been for him, I would have been another Bart Simpson. He had no hair and always wore a green vest, white shirt, brown shorts, and red sneakers. What I remember about the show is that Doug wrote about recent events in his life in a diary in almost every episode, like Carrie Bradshaw from Sex and the City or Doogie Howser from Doogie Howser M.D.
Doug had an active imagination, which usually helped to provide premises for the stories, å la Walter Mitty. He had alternate personalities such as Quailman and Smash Adams (an homage to James Bond).
The most unusual feature of the show was the various skin colors of each character, although most of which had “Caucasian Personalities”. There were characters that were black (Patti), white (Doug), blue (Skeeter), green (Roger), tan (Mayor White), and purple (Beebe).
Like every young man on the verge of adolescence, he dealt with issues such as first school dance, first crush (Patti Mayonnaise, which she never knows about), first kiss (Not from Patti, but from Beebe), and first pimple. Porkchop was great too in that he was a dog with the personality of a human.
My absolute favorite episode was the school picture day episode where Doug is shy about getting his picture taken because he doesn't like his big nose. That episode would have been more effective if he had tried to get plastic surgery and then realized the possible outcome of it. I really liked the message behind it which was about loving yourself for who you are, and that it's not what you are on the outside, but rather who you are on the inside.

When I was in junior high, I got teased a little about the size of my nose. Luckily, I never got a nose job, and I never will.

JUST SAY NO TO PLASTIC SURGERY

Doug was also the first cartoon (that I've seen anyways) to incorporate both Rock and Hip Hop music. In the school dance episode, one of my favorite quotes is when Roger, wearing a hammer costume, says “It's Hammertime.” An homage to M.C. Hammer. 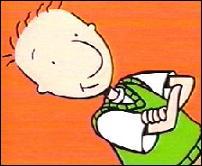 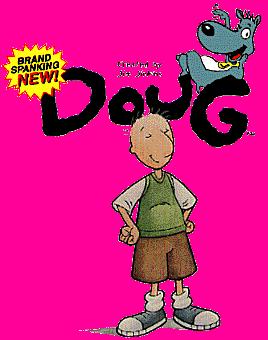 
The series lasted from 1991 to 1994 for Nickelodeon, but got picked up by Disney from 1996 to 1999. I don't think Disney's Doug wasn't very good. For one thing, Disney couldn't get Billy West to do the voices of Doug and Roger. 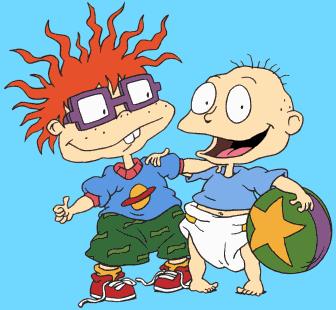 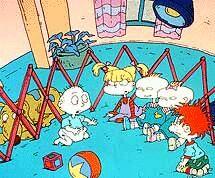 The show about how young toddlers perceive life and the events around them.

I thought the idea of babies actually talking to eachother was a little far-fetched, but it was innovative and entertaining. As time moved on, the animation had progressed as well as the storylines and music. We even got to see a little bit of the babies' softer sides, including Angelica's, who had always been a bully them.
I never could figure out what breed of dog Spike was. Eventhough he had the build of a greyhound, I don't think he was that kind of dog because of his ears. 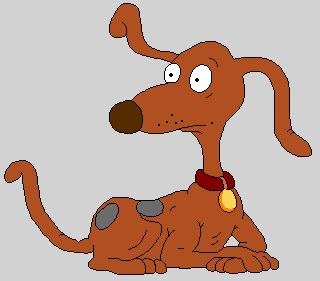 As far as I'm concerned, the creators of Rugrats were not racists, even though there were usually only white characters on the show. That had changed in the second season when the Carmichaels, an African-American family, entered the picture, including young Suzy.
Surprisingly, the show lasted for more than a decade. It didn't have the same effect on me that Doug did. My problem with Rugrats is that the show didn't focus on kids in my age group. That's not to say that it was not fun to watch, because it was. 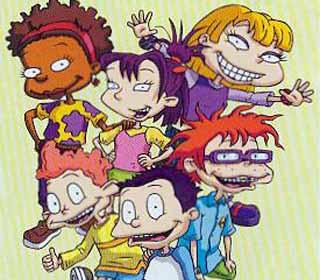 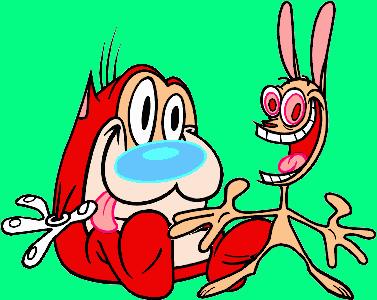 Ren and Stimpy- The show about an “Asthma Hound” Chihuahua and a rotund red cat with a large blue nose and no tail living together. 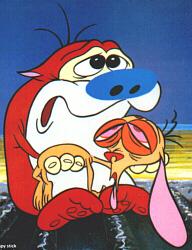 As a kid, I never picked up on any hidden sexual content or possible homo-erotic undertones. However, I understood most of the vulgarity of the show including booger jokes and flatulence. What struck me about this cartoon was that John K, the creator, was able to give cartoon antics an aesthetic quality. In other words, he could make something both insane and beautiful at the same time. I had also never heard jazz and classical music incorporated in cartoons the way it was in Ren and Stimpy.
It just seemed like after the episode “Stimpy's Invention” (the one with the Happy “Happy Joy Joy Song” in it), the show went downhill from there, especially when John K. was fired from Nickelodeon after missing so many deadlines. Despite its controversy, it lasted for four years and spun off the Ren and Stimpy Adult Party Cartoon, which didn't last very long.
16
Login To Vote!
More Articles From retroguy78 30
Quote O' Matic
Luke Skywalker: "(sees Yoda, who appears as a Force spirit) Master Yoda."
Yoda: "Young Skywalker."
Luke Skywalker: "I'm ending all this. The tree, the texts, the Jedi. I'm going to burn it all down. (Yoda summons lightning to burn down the tree and the Jedi texts)"
Yoda: "(laughs) Ah, Skywalker...missed you, have I."
Luke Skywalker: "So, is it time for the Jedi Order to end?"
Yoda: "Time it is...hmm, for you to look past a pile of old books, hmm?"
Luke Skywalker: "The sacred Jedi texts?"
Yoda: "Oh? Read them, have you?"
Luke Skywalker: "Well, I..."
Yoda: "Page-turners, they were not. Yes, yes, yes. Wisdom, they held, but that library contained nothing that the girl Rey does not already possess. Ah, Skywalker...still looking to the horizon. Never here! (pokes Luke with his walking stick) Now, hmm? The need in front of your nose!"
Luke Skywalker: "I was weak. Unwise."
Yoda: "Lost Ben Solo, you did. Lose Rey, you must not."
Luke Skywalker: "I can't be what she needs me to be!"
Yoda: "Heeded my words not, did you? "Pass on what you have learned." Strength, mastery, hmm...but weakness, folly, failure, also. Yes. Failure, most of all. The greatest teacher, failure is. Luke, we are what we grow beyond. That is the true burden of all masters."
Added By: CardassiaPrime
Star Wars: Episode VIII - The Last Jedi 53
TheMusicdewd18
Cartoon Classics #2: Rugrats
This article is about one of Nickelodeon's classic cartoons Rugrats!
An unhandled error has occurred. Reload Dismiss