Captain N: The Game Master review
By Nails105
On 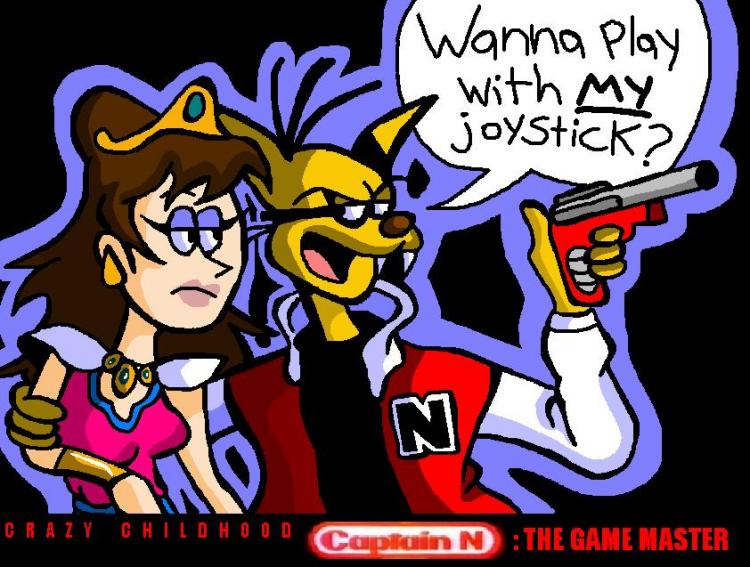 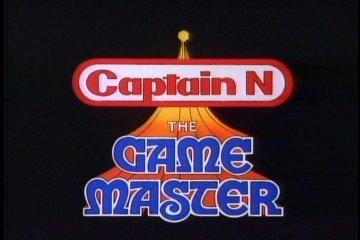 When you think of the 80's, what would be the first thing in your mind? That's right! Nintendo games. Super Mario Bros. , The Legend of Zelda, everyone was hooked to the #1 video game company of the world and it's video game system that helped revolutionize the gaming universe. In fact, if it weren't for Nintendo and it's holy grail, The NES, we would have games like E.T.


Yes, we are all grateful for having Nintendo with us for years to come. It was popular in the day and it still is. But perhaps it was TOO popular? 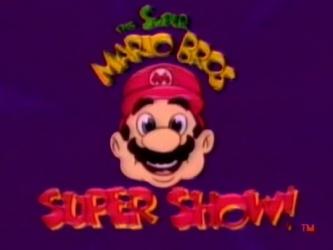 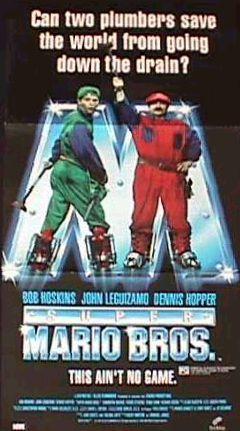 
With all things great, there has to be merchandising issues. Nintendo has (and still does) let many companies take advantage of our favorite video game characters, whether the product was cool or crap.

Then there was television. The now-defunct DIC Entertainment apparently had a deal with Nintendo to put our favorite video-game franchises into the little screen.

But the only question is: Which franchise would be able to catch our attentions on TV the most? Everyone had different tastes, and people are picky when it comes to TV. The answer is quite simple, really....


Why not have nearly every popular Nintendo game into one show?

And thus, we got Captain N: The Game Master, a cartoon show that's nothing more than a 30-minute commercial for Nintendo games. But we enjoy it for what it was, anyways.

Kevin is your typical teenage boy of the 80's, playing video games, wearing strange jackets, and hanging out in his room that looks like that it would even give Pee-Wee Herman an eye-sore.

One night, while playing some you-know-whats, Kevin, along with his dog, is sucked into his television, and lands in Videoland, a universe where video game characters live and breathe.

Kevin has been summoned by Princess Lana to help defeat the evil forces of Mother Brain. While in Videoland, Kevin takes on the title of Captain N: The Game Master, and is armed with a NES Zapper and a control pad that grants him awesome powers. 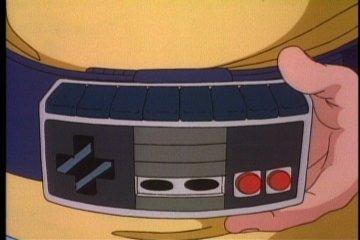 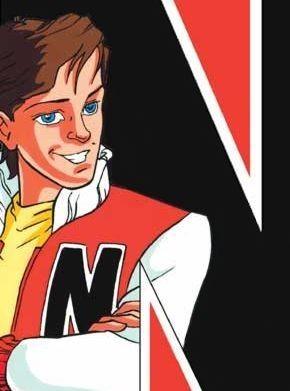 Looks like he just came back from a Colgate commercial.

The hero of the show (duh). Not much to say, except he's obsessed with video games and Princess Lana.

Let me ask this: If he's the master of video gaming, can he beat E.T. in less than 0.5 seconds?

...was he the one found out about the infamous 30-lives cheat for Contra III? 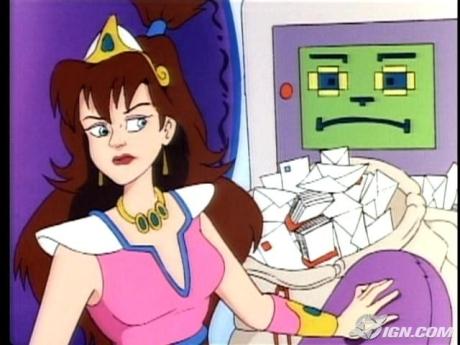 
By the way, before I talk about this character, let me just say that the voice actress who does Princess Lana has the coolest first name and weirdest last name I've ever heard of. It sounds like an unused character from the short-lived Galaxy High.


Anyways, Princess Lana is your average woman from the 80's: smart, bold, and not afraid to take chances to save her kingdom. 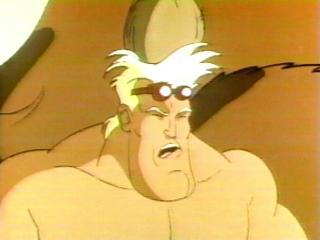 That's what you get for being an egotistical dickweed!

Ah, yes. The supposed reason why most video game buffs despise this show. A lot of people say that the creators of this show screwed up Simon Belomt from the Castlevania series big time. He obviously went from being a badass vampire hunter to a egotistical a-hole.

Personally, I really don't give a crap. In my opinion, Video games weren't really considered to be a work of art like today, so I guess they could do whatever the hell they wanted to these characters and people wouldn't mind.


That, and all TV cartoons need egotistical a-holes. 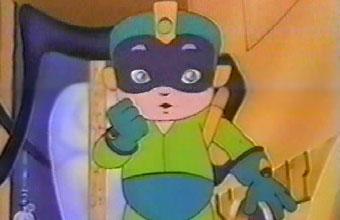 My God! He blinds my eyes!

Some may say that Belmont, KId Icarus, or Gameboy were the most annoying characters in the whole show, but for me, this guy just may be the most appallingly irritating character of all. He's sounds like Popeye if he sucked up a year's worth of helium. 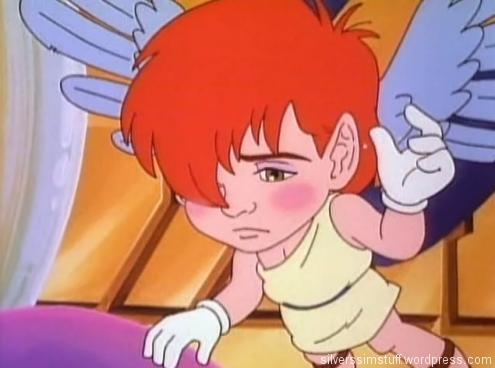 Many people wonder why did this character die in the NES era. Maybe it was because he always ended his sentences with "-icus" all the time. The douche.

You might think I'm thankful for Nintendo when they give Kid Icarus (Pit) a makeover in Super Smash Bros. Brawl, but I don't know. He looks a tad....feminine....


This character came in around halfway of the season, probably to help promote Nintendo's newest innovation, the....well, you know.

Gameboy is quite literally a Gameboy, with the green screen and everything. The only episode I saw with him in it was when he was first introduced. He was put into the show to help our heroes defeat Mother Brain, but what does he do? Drive our heroes crazy with his near-fatal antics. 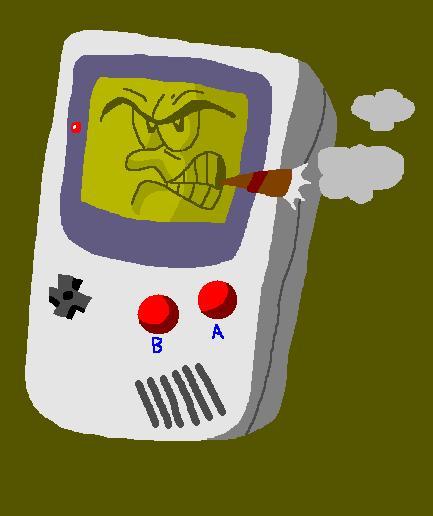 HEY KIDS! WHO NEEDS THE GAMEBOY WHEN YOU GOT THE "GAMEDOUCHE"! COMES WITH CIGAR AND 50 SWEAR WORDS! 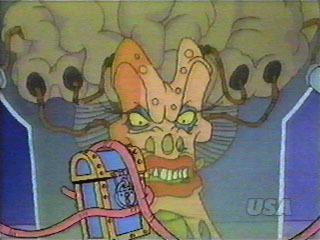 The main villian of the series. Originally, when I first saw a picture of her in a Nintendo Power magazine, I thought that she would that traditional evil queen voice like in Fire and Ice. But what I got was the singing plant from Little Shop of Horrors.

By the way, is it me, or does she look like the barf of Dr. Frank-N-Furter (Tim Curry) from Rocky Horror Picture Show? 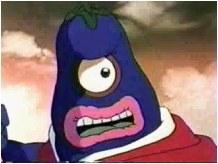 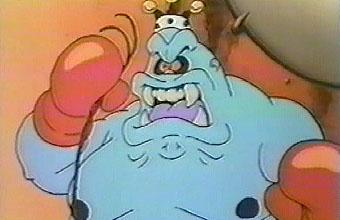 Move over, Tweedle-Dee and Tweedle-Dum!

Mother Brain's retarded minions. If Mother Brain really wanted to take over Videoland, why did she need these two? She should've dropped these two and recruited the modern Ganon and Bowser. At least they're threatening.


Whew! What a rush! And now, the good stuff.

Half of the time, it's really weird. For example, there's a scene in the 2nd episode where we see Donkey Kong in a Indiana Jones getup renacting a scene from Raiders of the Lost Ark. Then it turns out it was just a TV show called Donkey Kong Jones and the Last Banana. 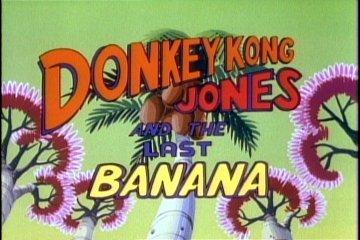 
Like I mentioned before, I hated it how they potrayed Mega Man in this show. I'm not really a big fan of the game, but even a non-fan will be pretty appalled. I mean...

-Why is he green instead of blue?
-Why does he sound like a midget with a tracheotomy?
-WHY AM I ASKING YOU THESE QUESTIONS???


Last, but not least, how many worlds can Videoland have? There's a Congoland (for Donkey Kong), a Bayouland, they even have a Burgerland (for the game Burger Time)! I wonder what else they have? 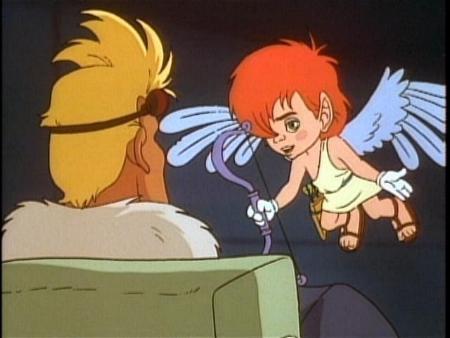 "I wanna punch you in the face-icus." 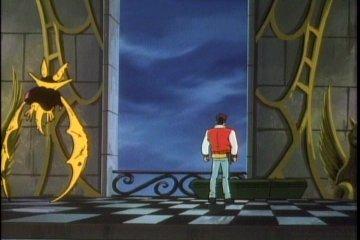 Uh, Kevin? The action's over here. Turn around, please?

As cheesy as it gets, the show is enjoyable at times.

Levi Stubbs, I feel, was a good choice for Mother Brain. The character pratically looks like a transvestite, so why not get her the guy who played a gender-confused plant?

I also like the look of the characters of the show. It sort of reminds me of the Howard and Nester comics from a retro issue of Nintendo Power, except given more depth in the design. 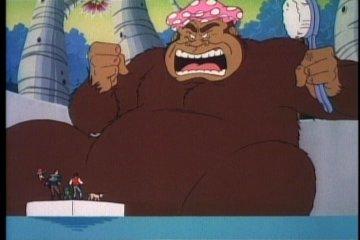 Should we be seeing this?


It was also kinda cool to see video game characters make appearances, such as Link and Zelda from...well, you know, Donkey Kong, and some obscure character named Bayou Billy (if anyone knows what game HE came from, let me know.).


But really, it's all worth it to hear Eggplant Wizard say "I'm just an incompetent vegetable." in that Droopy Dog voice. 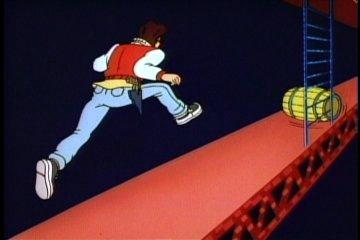 Will he make the jump? Is Yogi Bear smarter than the average bear?

Captain N: The Game Master is nothing more than a video game commercial and it's clear that video game buffs will take some of it's bad moments seriously, but there are some moments that makes it recommended by just a smidge.

22
Quote O' Matic
Sassy: "I'll get food by acting like I don't want food."
Chance: "That's stupid."
Sassy: "I'll prove it."
Chance: "Oh. You don't have to prove it. I believe you're stupid."
Added By: System
Homeward Bound: The Incredible Journey
Related Articles

53
Zen_Champion
The Most Underrated Sequels
Does part two really have to mean part awful?
-6
duckie1231
Childhood Cartoon crushes
Crushes I have been to imbressed to talk about