Loosely adapted from the classic 1932 horror film starring Boris Karloff, The Mummy is set in Egypt, where over 3,000 years ago the high priest Imhotep (played by Arnold Vosloo) was given the all-important assignment of preparing the recently dead for their journey into the afterlife. However, Imhotep made one terrible mistake - he became smitten with Anck-Su-Namun, the mistress of the Pharaoh himself. Driven mad by jealousy and love, Imhotep murdered the Pharaoh, and his punishment was to be buried alive and suffer the torment of an eternal life in his wretched tomb. In 1925, a band of adventurers seeking fame and fortune - led by Rick O'Connel (Brendan Fraser), an American expatriate who has joined the foreign legion, and Evelyn Carnarvon (Rachel Weisz), an amateur archeologist - find a previously unknown burial site in Egypt. The team starts to dig, hoping to find lost riches, but instead they disturb the tomb of Imhotep, and soon the cursed priest rises from his grave to wreck vengeance on humanity. The Mummy was written and directed by Stephen Sommers, whose previous cinematic journeys into the past include The Jungle Book and The Adventures Of Huck Finn. actors. Brendan Fraser - Rick O'Connell Rachel Weisz - Evelyn John Hannah - Jonathan Arnold Vosloo - Imhotep Kevin J. O'Connor - Beni Jonathan Hyde - Egyptologist Oded Fehr - Ardeth Bay Erick Avari - Curator Stephen Dunham - Henderson Corey Johnson - Daniels Tuc Watkins - Burns Omid Djalili - Warden Aharon Ipal

This video trailer was originally posted to YouTube by ActionPackedCinema.

Originally posted to YouTube by TheRealFatSquatch, this is Roger Ebert and ... 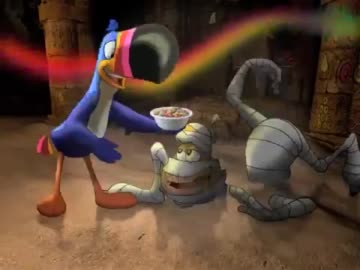 Froot Loops in The Mummy