The Iron Giant is a 1999 American animated science fiction film using both traditional animation and computer animation, produced by Warner Bros. Animation, and based on the 1968 novel The Iron Man by Ted Hughes. The film was directed by Brad Bird, scripted by Tim McCanlies, and stars Jennifer Aniston, Harry Connick, Jr., Vin Diesel, Eli Marienthal, Christopher McDonald, and John Mahoney. The film is about a lonely boy named Hogarth raised by his mother (the widow of an Air Force pilot), who discovers an iron giant who fell from space. With the help of a beatnik named Dean, they have to stop the U.S. military and a federal agent from finding and destroying the Giant. The Iron Giant takes place in October 1957 in the American state of Maine during the height of the Cold War. The film's development phase began around 1994, though the project finally started taking root once Bird signed on as director, and his hiring of Tim McCanlies to write the screenplay in 1996. The script was given approval by Ted Hughes, author of the original novel, and production struggled through difficulties (Bird even enlisted the aid of a group of students from CalArts). The Iron Giant was released by Warner Bros. in the summer of 1999 and received high critical praise (scoring a 97% approval rating from Rotten Tomatoes). It was nominated for several awards that most notably included the Hugo Award for Best Dramatic Presentation and the Nebula Award from the Science Fiction and Fantasy Writers of America. However, the film was also a financial failure, making only $31.3 million worldwide against a budget of $50 million. 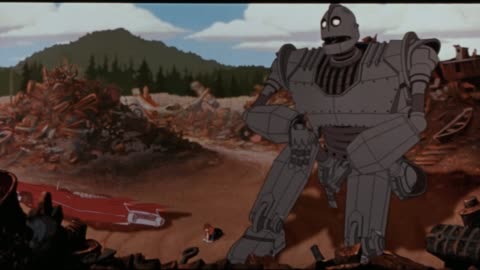 7
Quote O' Matic
Scroll: "I, Lemuel Gulliver, give thee a most faithful history of my most interesting adventure in the south sea. On the 5th day of November, 1699, having reached latitude 30 degrees - two minutes south - a storm of great fury suddenly, [the rest cannot be seen]"
Added By: Clint_Olson
Gulliver's Travels
Related Articles

29
WinnieThePujols
Games of My Youth I -- NES
Part one of my miniseries takes a look at the first console I ever had -- the NES.
More Articles
An unhandled error has occurred. Reload Dismiss