Akira is a 1988 Japanese animated film co-written and directed by Katsuhiro ÃƒÂ”tomo based on his manga of the same name. The film is set in a neon-lit futuristic post-apocalyptic Tokyo in 2019. While most of the character designs and basic settings were directly adapted from the original 2,182 page manga epic, the restructured plot of the movie differs considerably from the print version, pruning much of the last half of the book. Akira is regarded by many critics as a landmark anime film, one that influenced much of the art in the anime world that followed its release. Therefore, Akira is regarded by critics as one of the greatest animated films ever made. The movie led the way for the growing popularity of anime in the West, with Akira considered a forerunner of the second wave of anime fandom that began in the early 1990s. One of the reasons for the movie's success was the highly advanced quality of its animation. At the time, most anime was notorious for cutting production corners with limited motion, such as having only the characters' mouths move while their faces remained static. Akira broke from this trend with meticulously detailed scenes, exactingly lip-synched dialogueÃ¢Â€Â”a first for an anime production (voices were recorded before the animation was completed, rather than the opposite)Ã¢Â€Â”and super-fluid motion as realized in the film's more than 160,000 animation cels. Notable motifs in the film include youth culture, delinquency, psychic awareness, social unrest, the world's reaction towards a nuclear holocaust and Japan's post-war economic revival. The film also explores a number of psychological and philosophical themes, such as the nature of corruption, the will to power, and the growth from childhood to maturity both in individuals and the human race itself. Elements of Buddhist symbolism are also present in the film. PLOT: On July 16, 1988 a mysterious explosion destroyes Tokyo. 31 years later, Neo-Tokyo was built. One night a gang of teenage bikers called the Capsules, led by smug 16-year-old delinquent Shotaro Kaneda, engage a rival gang in a street fight. In the midst of the fight, Tetsuo Shima (Kaneda's close friend) is injured when his bike inexplicably explodes in an attempt to avoid running over an unusual boy. The Capsules arrive at the scene only to see soldiers collecting the boy (who is named Takashi) and Tetsuo while they are brought in for interrogation. They are eventually deemed innocent and Kaneda convinces the interrogators to free Kei, a female rebel along with them. Tetsuo escapes from his captors and after meeting up with his girlfriend, decides to run away far from Neo-Tokyo. The rest of the Capsules catch up with them and Tetsuo and Kaneda enter an argument during which the former reveals a long-hidden resentment to the latter. Tetsuo tries to leave but then has painful headaches and is recaptured. Later that night Kaneda notices Kei, follows her to the Resistance hideout and listens to the group's plans to capture Tetsuo. Meanwhile, the Espers Ã¢Â€Â“ Takashi, and two other children named Masaru and Kiyoko Ã¢Â€Â“ concerned about Tetsuo's growing psychic powers, launch an attack on him. He manages to fend them off and makes his way towards their nursery for revenge. At the same time, Kaneda and the Resistance are spotted sneaking into the lab and a shootout ensues. In the violent onslaught, Kiyoko possesses Kei and leads Kaneda to the nursery, where Tetsuo has already arrived wreaking destruction. Tetsuo then learns about something called Akira and hoping to find a way to end his headaches, heads for Akira's cryogenic chamber beneath Neo-Tokyo's Olympic Stadium. Kei and Kaneda are imprisoned and Kiyoko explains to Kaneda about the origin of their powers and how Akira destroyed Tokyo, after which the two teenagers are freed. Tetsuo eventually makes his way to Akira's chamber and destroys it, finding nothing but several canisters containing human organs. Kaneda then arrives and engages Tetsuo at the ruins of the chamber, during which Tetsuo loses his right arm. He flees to Olympic Stadium where he soon begins to lose control of his powers when his body mutates into an ever-expanding blob of flesh and machinery, forcing The Espers to summon Akira. They succeed and his arrival creates an energy sphere which begins to absorb Tetsuo. He drags Kaneda along with him and The Espers decide to sacrifce themselves to free Kaneda. He is freed and awakes outside Neo-Tokyo upon hearing Kei's voice, where they see the sphere obliterate everything on a catastrophic scale,and find Kai crying. In the aftermath, Kaneda,Kai,and Kei survive and drive into the city to start over, wondering if Tetsuo is truly dead. It is revealed that Tetsuo is alive, now as a god-like entity far away in another universe. From a place that is no place: I am Tetsuo. 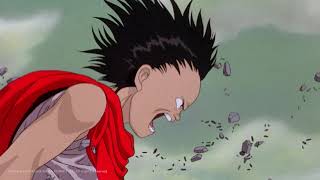 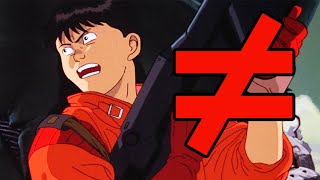 Are you sure you want to delete this YouTube video?
Quotes
Kaneda: "What happened? Quite a mess, huh?"
Tetsuo: "Well, it's over now. It isn't like you to miss the party."
Kaneda: "You really put quite a scare into all of us. The guys thought you might be out here cryin' for help again."
Tetsuo: "Kaneda, we're not back in school anymore. Ever since I was a kid, you've been tellin' me what to do. Always treating me like a kid. You made me look like a runt in front of the others."
Kaneda: "Now you're king of the mountain, aren't ya, but it's all garbage!"
Tetsuo: "Kaneda!"
Kaneda: "Okay, let's settle this once and for all!"
Added By: Steve_Freeling
Policeman: "I'm not that much older than you, so don't call me pops or you'll find yourself polishin' my boots with your tongue! Now take your friends and get outta here and take her, too!"
Kaneda: "Well, the least you could do is tell me your name!"
The Colonel: "Men, we're going to the Olympics."
Tetsuo: "I... Am Tetsuo."
Are you sure you want to delete this movie?
Locate The Duplicate Entry For Akira

11
Quote O' Matic
Egon: "To Peter Venkman, he may kill us yet. Cheers. -Egon"
The Real Ghostbusters