Remember when it was fun to just walk down the isles of your local video store?
By Evil_Dr-_Spears
On
When I was about 11 or 12 my family and I moved into a little northern Kentucky town called Erlanger. It was pretty decent town: clean, friendly, close to Cincinnati. But there was something about that house that makes it stick out so well in my memory. You see, it was only about a quarter mile away from Westwood Video. Now I don't know if Westwood is a regional store, or if it's a chain, or if this was it's only location but it was like a mini paradise in my messed up little head. "Why", you ask? As a kid I was sort of a pansy when it came to movies. (Seriously. I mean the big robot from Robocop scared the living crap out me.) Because of my inborn cowardice movie boxart and posters were my only exposure to the horror genre and for some reason I loved them. They were so full of action, gore, carnage, evil and everything else little boys are made of. I remember at very young ages going into other video stores at younger ages and heading for the horror aisle while my mom looked for whatever rom-com she could find to kill hours, but this was the first time I'd ever actually live right by a real life video rental joint. I would walk there just about every day (literally) and walk down the the same two aisles for sometimes hours on end just marvelling at the macabre artwork that lay before me. I know I had to have creeped the proprieters out as I never ONCE actually rented anything, but this was a museum to me, and you don't usually buy things from museums. I know I can't be the only one who feels this way.

Alas, movie promotion is a dying artform. To find great examples of film art you can only look to the past. I intend to that right now on a movie by movie basis. So why not start with an absolute classic of 80s cinematic terror... 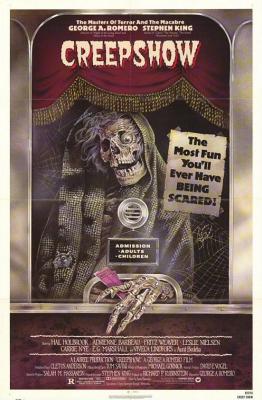 If you don't like this movie you should just stop reading this article right now.

Now this is a POSTER! It's just such an incredible image. It's got a hooded reaper-esque figure serving as the clerk at some theater that looks like part of a ghost town. And our friendly host is breaking that pesky fourth wall by offering US our own personal ticket. Talk about luring a potential customer in. Not to mention it has the the names of both George A. Romero and Stephen King right up top above the skeleton. Some names just deserve to be flaunted. Admittedly this art doesn't have quite the same effect on a video box but I'm frankly glad that they didn't update it with a rental theme. I don't think the reaper would look too good with a Blockbuster uniform.

Does the film live up to the poster: Yes. Yes. Oh god yes. Granted the acting isn't great (*cough* Stephen King *cough*) but this movie feels so much like an E.C. comic that it's scary. A great blend of horror and comedy. 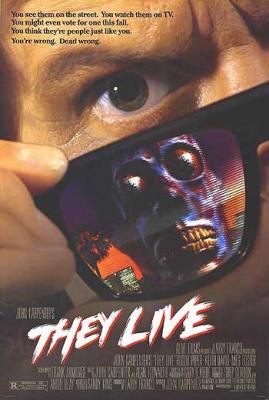 "It's time to kick ass and chew bubble gum. And I'm all outta gum."

Up next we have "They Live". This is sort of a deceptive piece. At first glance you may take the movie as a typical action movie or comedy but then on closer inspection... OHMYCRAP IT'S A PURPLE ALIEN SKULL THING! I don't really know why but this creature always touches my fear nerve a bit, even to this day. I think it's the fact that he looks so human and yet monstrous. It's almost like he can almost be trusted but you can plainly see that he has evil motives. Of course this movie was loaded with social commentary (as is any good horror film) so I'm sure that may have been the intended feeling.

Does the movie live up: In my opinion it does. It may vere a little to closely to the action genre for some peoples taste but it does have a great story about aliens taking the form of Reagan-era yuppies. Plus it has a neat ending. And Rowdy Roddy Piper. Yeah! 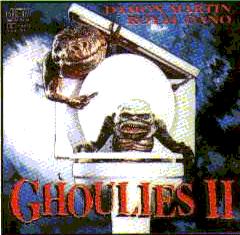 Keep this movie away from potty training todders.

Ah, the "Ghoulies" series. How you taunted me as a small child. These VHS covers are probably the earliest I remember and boy is that unfortunate as those little creeps on the front made me nervous every time nature made a call. I'm sorry but I do not want to imagine a green toothy version of Tommy Pickles biting me in unmentionable areas. In fact I think the art for these movies must have been designed specifically to scare kids because they look pretty ridiculous to an adult. On top of that there are very few scenes (only one that I can specifically remember) that involve toillets. Still good covers. Except for part 4. I don't know what is up with that.

Do the movies live up: Not so much, no. There alright if you can turn your brain off but they are certainly not cinematic marvels. I think you can buy a two-in-one DVD of part 1 and 2 for about 10 bucks at most places though so it's not like you're loosing much giving them a try. 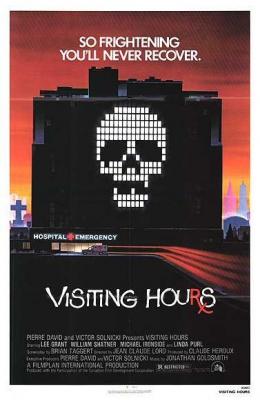 It's a hospital. You'd think they could invest in some working light bulbs.

"Visiting Hours" is another movie that has a very deceptively simple cover. At first it just looks like a white skull on a black background. Simple but still cool. But zoom out and you see that it's actually a hospital with most of it's lights out. Around the building you'll see a city skyline in the distance and some kind of cross on the opposite side. Apart from those things there is nothing else around but a lone ambulance. This gives a great sense of isolation and helplessness. On top of that the background colors of red, orange, and purple along with the silhouette of the hospital give a great feeling of impending night. I should point out that seeing this box in about every rental place I can remember did to me for hospitals what "Ghoulies" did for the bathroom. It made a safe place seem dangerous and terrifying. Good times... good times...
Does the movie live up: I've actually never seen this one but considering it has a 4.2 rating on IMDB; I doubt it. The plot sounds like a typical slasher flick. It does bring up an interesting question however. If a psycho killer attacks you in a hospital where exactly could you go to be safe and to heal? 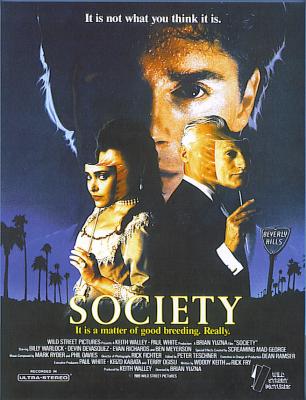 If you needed further proof that rich people suck...

Masks have played such a great role in horror ("Phantom of the Opera" anyone?) that you can't blame "Society" for using them right on the poster. Of course this is an 80s horror movie so they had to add a bit of gore with the flesh peeling and what not. I aslo like the look of the stars and the use of Beverly Hills as a scary locale. The face in the background may be a bit (i.e. VERY) cliched these days but it goes well with the rest of this poster. Unfortunately I can't really go into to much detail about this poster as you kind of need to see the movie in order to truly understand it.

Does the movie live up: Yep. In fact this may be technically the most artistic movie in the list. And it has some more lovely social commentary. It may be too surreal for some, though. 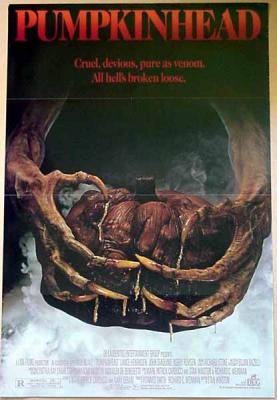 Nothing says Halloween like demon hands holding a pumpkin.

This image just personifies horror in my opinion. I actually remember seeing this poster for "Pumpkinhead" in my local theater when this movie came out and I was only 5. Scared the living hell outta me. I literally was afraid to walk by the theater window for fear of these hands somehow reaching out and ripping my head off. (I told you I was a pansy of a kid). They are just so freakishly long and boney and slimy. Ugh. You could see from this poster alone that if you forked out the money on a ticket you were in for one fine monster flick.

Does the movie live up: Definitely. This is one of my favorite movies. The acting is top notch. The plot is about a mourning father enlisting a demon to avenge the accidental death of his young son. It's both touching and creepy. It's got one of the greates monsters ever also. Seriously, google this guy. 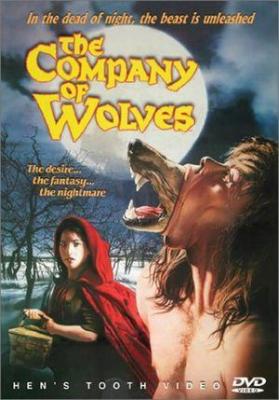 One of my favorite covers ever has got to be "Company of Wolves". I swear that back in the day I thought this film was about a killer wolf that crawled out of people's throats. Hey, I was like 9. I didn't get the artistry and symbolism in this work of macabre art. It looks easy enough to explain. An version of ridinghood and a werewolf. But there are so many ways to interpret it. You can make comments on the loss of innocence. You can mention the importance the mythology plays in it. You can even go the Freudian route. (It's a young woman and and a wolf/man attacker; you do the math). I didn't think of all this as a kid, though. I just knew that this box kicked serious butt. Still does in fact.

Does the movie live up: It's one of my favorite movies ever. If you like werewolfs and old fashioned Grimm-style fairy tales you will love this movie. 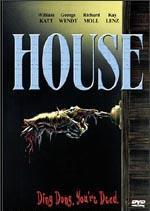 I won't say much about this poster because, as can clearly be seen, sometimes less is more. It's a zombie hand ringing your doorbell. It just gives the message that whoevers in that house had better not open the door or else they are royally screwed. This is another cover I saw at every little video store I went to as a kid. And none of the big chainstores that are around here now carry it. Funny how that works. Of course I own the DVD so who cares?

Does the movie live up: Yes it does. It's really a very light horror film that doesn't earn it's R rating. It's actuall more of a dark comedy and no one ever dies in it actually (except for one suicide and a somewhat violent war flashback). But that doesn't take anything away from the movie as it is hilarious with likeable characters and excellent monster designs. It is a bit disjointed though but that is easily forgiven.

I guess that that'll be it for this set of posters and cover art. But I have a load more ideas bouncing in my brain and I plan on making this a 3 parter by week's end depending on the feedback I recieve. And if anyone else cares about this I'll gladly take reccomendations.
2
Login To Vote!
More Articles From Evil_Dr-_Spears

19
Quote O' Matic
Patty Pants: "My name is Patty Pants, and I need a new diaper!"
Stu: "She walks! She talks! She wets! She even has realistic diaper rash!"
Grandpa: "Looks lifelike. Even smells lifelike. If I didn't know better, I'd say it was Tommy"
Added By: System
Rugrats
Related Articles