Do you dare walk these aisles again?
By Evil_Dr-_Spears
On
It's time once more to take a little tour through your childhood Ma and Pa video shop, guys and ghouls [hehe... funny]. In the first chapter of this series I offered up a few of what I thought were my favorite old school horror covers and posters. Well, as usual hind sight was 20/20. While the pieces I included are great, in my opinion, there are way more that I somehow forgot. So with a clear mind, a bit of sleep, a lot more time, and some suggestions from Retro Junk visitors, let's see where this little trip takes us. 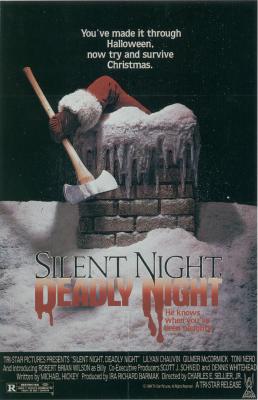 Yep. Santa's a serial killer. Like you didn't know.[/align]

This is another cover that particularly scared the living crap out of me. I've already mentioned how bathrooms and hospitals had been ruined for me by Ghoulies and Visiting Hours respectively but now they had to go after Santa. The very icon that all children idolized. Was nothing sacred in the attempt to "slasherize" every holiday? I remember seeing this cover for the first time in a little gas station along the highway in West Virginia. Of course this was around Christmas time. Needless to say for the next week or so I worried relentlessly that some fat rosey cheeked madman was going to shimmy down the chimney and axe my parents to death. Now that I think about it it's amazing that I took so well to an industry that seems so hellbent on destroying every ounce of innocence that I had. Oh well.

Does the movie live up: Meh. When I first saw it at 13 I thought it was great but that was probably just teenage hormones working. And in case you're wondering; no, Santa does not go on a killing spree in this movie. It's just some wacko obsessed with "punishing the naughty". Of course since this is a slasher flick all this naughtiness usually involves nubile women. Do not let children near this film, though. 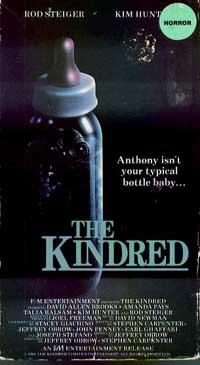 This is what happens when you let Similac spoil.[/align]
This, like House, is a VHS that I saw in just about every Ma and Pa shop I've ever been too. And with good reason. It's yet another deceptively simple little piece. When you see it from a distance it looks like just a baby's bottle in a pitch black room. However, when you look closer you'll notice the green reptilian hell fiend that waits inside. And it's a pretty awsome looking monster to boot. Kind of a mix between an "Aliens" style alien, a gremlin, and a lizard. Fortunately when I first saw this cover I was well past the age where I drank from a bottle.

Does the movie live up: It's kind of a mixed bag really. It's about a guy and his mutated freak brother (the guy from the cover). It's got a cool monster and a couple of good death scenes but the story, acting, and such fall sort of flat. 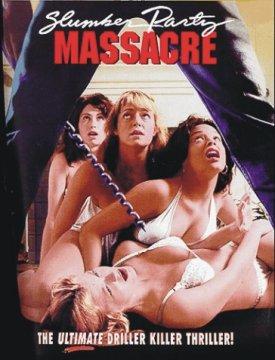 Is that a killer drill in your pocket or...[/align]

Wow. I'm not sure where to start with this one. It's simply a bunch of attractive scantily clad teenaged girls piled on top of one another while a man waves his drill at them. Also notice where it seems that all the girls eyes are pointed. I'm not even going to touch the subliminal imagery here with a ten inch pole (heh). Now as a small child this one never grabbed my interest but of course when I reached those glorious early teen years this one became one of favorites. What can I say? I'm a male.

Does the movie live up: No. Not at all. It's got a dumb story, bad acting, boring kills, and a forgettable villain. There is a good story behind it's production though. Believe it or not this film was not originally concieved as some kind of male fantasy. No. It was actually written by a well known feminist as a parody of slasher films. It was changed by studio execs leaving us all to wonder what would have been. Or maybe that's just me. 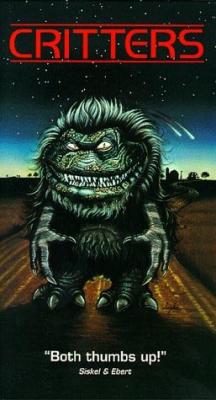 Robert Ebert gave it his thumbs up even with the bad caricature of himself on the poster. What a sport. [/align]

I absolutely love this cover. Again it's one that every video store use to be required by law to carry. Thing is that back then it didn't actually scare me that much. I didn't really know why. I mean I used to be afraid of some muppets. This critter should have by all means terrified me but it just didn't. As an adult I finally know why. The little guy is freakin' adorable. Look at that jelly belly. He's like a cuddly teddy bear. A teddy bear that'll gnaw you to the bone, but a teddy bear none the less.

Does the movie live up: Oh God yes! This is a true B-movie classic. It's pretty much a Gremlins parody/homage/rip-off involving little flesh eating aliens that have wound up on earth. There are also a couple of bounty hunters who have been sent to exterminate them. It's got horror, action, and comedy all rolled into one nice hairy ball. 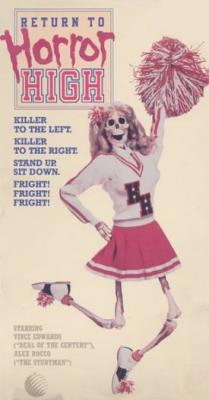 You all better be able to figure out what this movies about. If a movie's box contains a skeleton in a cheerleaders outfit and the words Horror High then odds are it aint Hitchcock. I actually remember pretty specifically this poster hanging in a place called Snow White Video in Berea, KY for as long as I lived there. Odd thing is I don't recall ever seeing the actual MOVIE there. It is a damned cool picture for a poster though. I'd really like to know how they did it. Considering it was made in the years before advanced image editing sofware they may have actually put a skirt on a skeleton. I want that skeleton.

Does the movie live up: Never seen it but probably not. How could it? 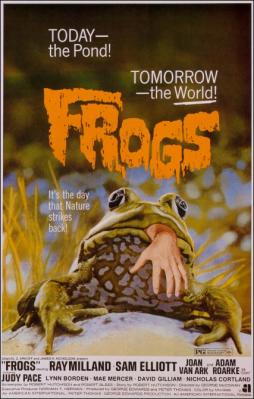 Not the best title for a documentary on France.[/align]

I really only say this movie in one video store as a child but, oh boy, is it memorable. The frog is almost cute except for the hand hanging out of it's mouth. Obvioulsy it's implied that our little amphibious friend somehow devoured some poor oaf. Sure, frog's don't have teeth and their bodies are much too small to hold a human corpse but SCREW LOGIC! THAT FROG ATE A GUY! And, honestly, when it comes to art don't evil frogs always beat reality?

Does the movie live up: If you have a taste for B-movies then yes. I mean, come on, it's about killer frogs. Don't be expecting Citizen Kane. As a side note - if you do want to see this movie try Wal-Mart. In my experience this DVD is legally required to sit in ALL Wal-Mart bargain bins.

This cover takes the easy route. It grabs two of the coolest things known to man [cowboys and skeletons] and throws them together. A cheap strategy but a good one. I mean, who could pass on a skeleton cowboy? It seemed that back in the 80s and early 90s alot of cover art was done either by comic book artists or to look like the work of comic artists. A good idea I think and, in this day of poorly photoshopped independent DVD covers, one I sorely miss. The more horror-savvy of readers probably know that Ghost Town was a Charles Band production. Charles brand had a habit, whether good or bad, of placing his villains front and center on his covers and posters. Take a look at some of his other work... 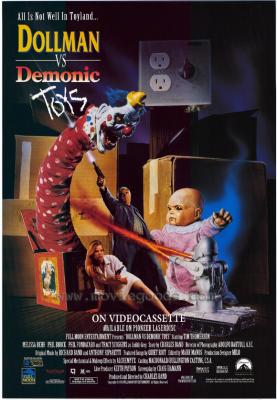 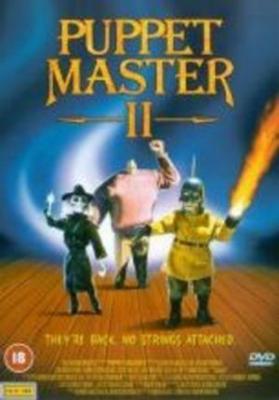 See what I mean?

Does the movie live up: It's like "Army of Darknes" but in the old west. A cop gets pulled into the past to save a girl yadda yadda yadda. It's not terrible but it's also certainly not a classic. Ghost Town is the pure definition of "meh". 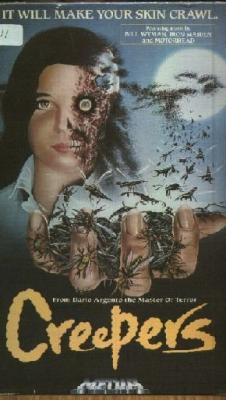 This fate awaits the makers of Raid.[/align]

It seemed that back in the day the video aisles were absolutely infested with bugs. With movies like Ticks, The Nest, Skeeter, Mosquito, Slugs, Squirm, and Arachniphobia it would be very easy for any kid who even glanced at the rack to develop some serious phobias. The creators of Creepers' cover art certainly knew this. The artwork seems to play off of three seperate fears. Firstly it's got the whole classic gothic theme working in the background. Secondly, it uses the fear of bugs that I mentioned already. Lastly, and most importantly, it invokes the inborn fear of infestation. The thought of millions of little monsters crawling on your skin (or even under it) is enough to give the toughest person a chill. Not to mention that the cover also looks simply cool. I'd love to get that tattooed on my back. I would do it if it weren't for those filfthy needles. Who knows what kind of eggs could be waiting on those things, eh?

Does the movie live up: The cut version (Creepers) does not. It's hard to follow and is pretty boring. The uncut version (Phenomena), however is definitely worth finding. It's a great little thriller about a girl who can control bugs through psychic ability. I've always felt that director Dario Argento was a bit overrated but this is, in my opinion, his best work. 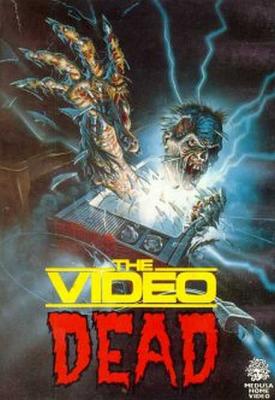 Oh... hell... yes... Now this is a COVER! If this picture doesn't epitomize 80s horror I don't know what does. It's outlandish, exaggerated, and still has artistic value. The best part is it's not at all hard to describe. There's a zombie reaching out of a TV and he looks pissed. So would you be if you lived in a television. This is undoubtedly done by either a comic book artist or a cd cover artist. The syle is so similar. Just look at that zombies face. Remember how I said I wanted to get a Creepers tattoo. Well I want to buy a school bus just so I can have this image airbrushed on the side. No kidding.

Does the movie live up: No. Oh sweet God no. Rent it if you like bad movies though. You'll have an absolute blast with it.


That's it for this chapter guys and ghouls [god that is SO funny]. Thanks for reading this overlong tribute to things that we probably remember better that those who actually made them. Be sure to look out for part 3...

or else...
7
Login To Vote!
More Articles From Evil_Dr-_Spears