Here is the start of my series of lesser known episodes of very known shows. Episodes that might get you to see a known show in a way you haven't seen
By Pokejedservo
On
TV Series having an episode featured in here: Pokemon
Name of Episode: #101, Mandarin Island Miss Match (Japanese Version #99, Kanna of the Elite Four. Ice Duel!)


This episode takes place in the Orange Islands when Ash & Misty travel about there with temporary new companion Tracey Sketchit. And in this episode a famous trainers comes nearby our intrepid trio whom is known other than... 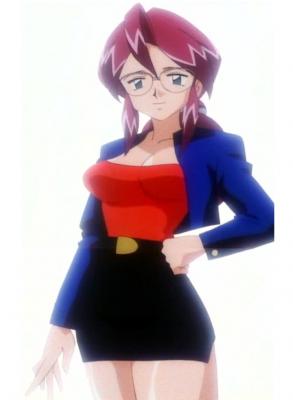 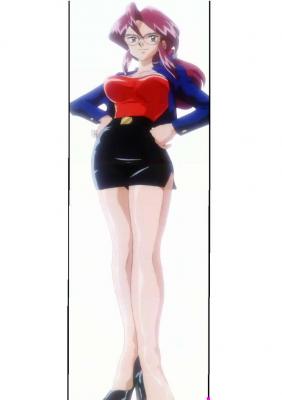 Seem remotely familiar? For those whom remember the first game set namely Pokemon Red/Blue you might more recall her as Lorelai. The Ice Trainer whom is the first Elite Four member you battle with in the end of the game. However it seems that there was a creative visual difference or few this time around. Though to be fair Nintendo did try to base her design more from the anime series in later Pokemon games occasionally. And why is she called Prima instead of Lorelai you ask? Simple when 4Kids dubbed this episode they came up with a different name to try to match with the lip sync.So they seemingly coincidentally named her after a rather questionable Video Game Strategy guide company. She had her original name in the Japanese original version of this episode but it was her orriginal Japanese name by the name of Kanna. Kanna means "Well Bollosomed Flower" (yep I can assure you innuendo intended, so feel free to snicker about appropiate her name is.) So lets just say Toshiro Ono is not the only one whom had a little bit of naughty fun here. And the episode itself has a bit of that kind of fun with shots like this... 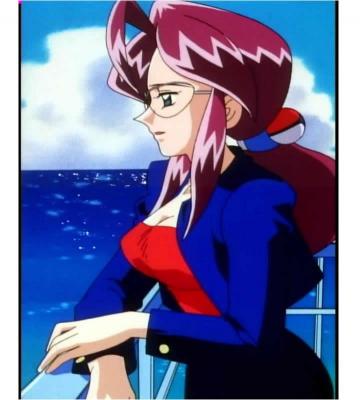 She is from a Nintendo game series but admit some of you are thinking of somethign a little more "Tecmo" aren't you?

Now I know that are some rather curious viewers whose right hand have "mysteriously" gone south to "warmer areas" by now for sure. However is this episode is just for the sake of fanservice? Is her appearance here entirely for the sake of getting older viewers to actually just for some fleshy eye-candy? Actually..... No, no it isn't... How so you ask? Simple for starters she is probably one of the smartest in the whole show. Granted I know at least one of you is thinking "Heh thats not saying much" but still despite the all too obvious comparisons there is still validity in my statement. For starters she is one of the first characters to full realize that the Pokemon are the ones doing all the hard work in the battles. That all the gym badges are just simply the Pokemon's way to thank their human trainers for their help. Very good moral which is also a rather intresting contrast with on how the rest of the series frequently places the praise on the trainers far more than the actual Pokemon. Her very laid back persona might seem odd to some on she seems to be quite the firm believe of the late great Bruce Lee's stance on how to move like Water. (Even though Bruno is the martial artist of the four.) How are her trainign skills you ask? Defintely top notch I can assure she is capable of attacking her opponents with silent yet deadly ferocity. She says that in battle she is as cold and unforgiving as Ice, so in another words she is quite the dominant one in the heat of battle. (Though no I don't mean the whipping type of dominant, sorry boys.) 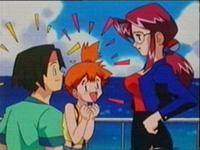 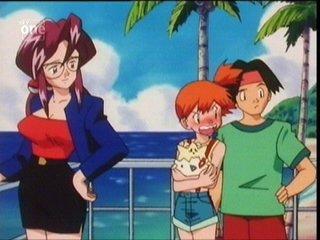 Ever since this episode first premiered some folks went a little curious on how Misty is really like to put it QUITE mildly. Which is where Chestshipping was born. However not all were pleased by that in fact some flatout hated it. Its not necessarily entirely out of sexual prudence mind you. (In fact when it comes to Yuri/shoujo ai Stackedshipping is more preferred which is Prima/Professor Ivy. Besides some were curious on how Misty's Sisters would react to her if you know what I mean.) Some might find it fun to joke around with Misty on this regard but in all honesty she was just simply a energetic fangirl at this moment. You see despite on Ice is suppose to be Prima's specialty she is apparently more popular with Water trainers and the like. (Though to be fair most of the Ice Pokemon back then pretty much are also Water types.) And in all things considered in retrospection, there has been fan reactions that look a lot more "questionable" than this to be perfectly honest. However what of Tracey you ask? I mean sure just about anyone would guess Brock's reaction (like wishing this island had a Tahiti-like beach) but what about the more calmer Tracey? Did he pretty much compltely calm himself upon our well-endowed special guest? Not... quite, in fact he is trying to be a bit more subtle. Namely on how he frequently tries to sketch her in just about any chance he gets. Take a look at this visual evidence for starters... 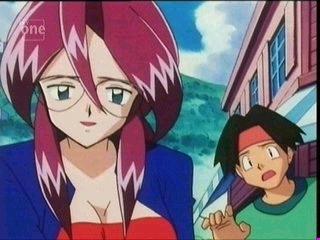 So close and yet so far huh Mr. Sketchitt?
The basic plot of this episode is that Prima is coming to the town there since her house is right nearby. She arrives for a special appearance at a nearby stadium for all Pokemon fans to see. Tracey and Misty are excited as ever yet Ash is bitterly skeptical whether she is the least bit competant. (Despite on how he actually did in the Indigo Pokemon League ironically enough. Heck Ash even tried to fight some random trainer to prove his superiority and lost horribly. And Prima saved them by getting Ash's rapid Charizard to calm down.) They try to talk some sense to him especialy Misty whom finds him to be as much of a moron as usual. However Prima does understand that actions do speak louder than words so the two arrange a battle. Prima outclassed Ash compltely in their battle. While Pikachu gets a comfortable rest on Prima's lovepillows, she tries to get Ash to understand the true values of being a great pokemon trainer. 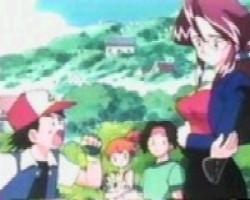 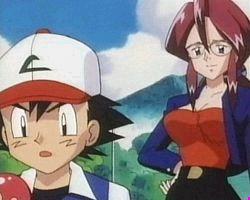 So basically for a good amount of you anime fans out there picture Kakashi from Naturo if he did a "Sexy No Jutsu" while teaching. ;) Just kidding, anyways all joking aside things went rather smoothly. Well aside from Ash being kinda slow on Prima's lessons. But what of Team Rocket you ask? No Jessie doesn't show up feeling competitive by wearing that awfully "sharp-topped" dress she once had if you know what I mean. They just simply thought of coming over to Prima challenge her to a match than run off with her pokemon. Apparently Ash wasn't the only whom was a little forgetful of previous losses. And of course Prima beats them soundly while making a slight plug to her lesson tapes on cassette for nearly $20 each. And afterwards our trio leaves our fully figured special guest as her last words are pretty much. "The Ice is Nice" was her last spoken words in the whole series (which is also the title of her only fansite in which these pics came from). And Ash leaves just a little bit smarter, well for now at least. And there goes one of the characters whom fans request a comeback episode the most, whether it be to see her exceptional skills or to see her strip down to a swimsuit like how May did in Pokemon Advanced. (Or both...) But nothign is official yet but it has been said that the chances of her appearing again are remotely existant. 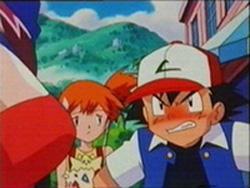 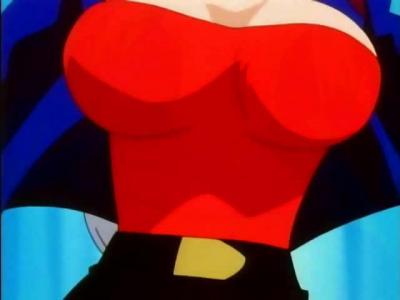 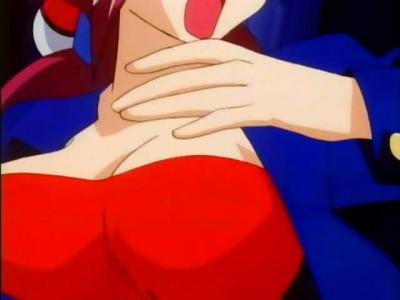 Amazingly enough the ONLY scene that was actually censored was the left one. In the left scene 4Kids digititally removed Prima's right breast there. Other than that they left it untouched AND I heard it was compltely uncut on DVD. Intresting huh?

Names don't ring a bell? Meghan was also the original English VA for Mai in Yu-Gi-Oh!, and Prima is far from her only role in Pokemon. She is also Nurse Joy, Officer Jenny, Cassidy & Dupulica well just to name a few. Maria Kawumura is also a somewhat known seiyuu (Japanese term for VA) as well. She is Naga the White Serpent in Slayers and Quess in Mobile Suit Gundam: Char's Counterattack just to name a coule of examples. Their not the most known VA's around but they certainly do have their experience. And on a different note Nintendo of America made the N64 game Pokemon Puzzle League they included her in and even called her by her actual name Lorelai this time. Seems all nicely predictable huh? Well skippy I'll tell you this, Nintendo of America threw us a bt of a screw ball and a curve ball here, how? I'll tell you... 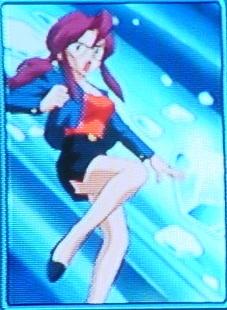 Okay NOA which one of you jokers hired Happosai to get involved in the game production?

Apparently NOA gave her a bit of a different characterization here. In the show she was genuinely laid-back but in this game she was actually a little flirty with Ask Ketchum. Yep you read it right she was actually a bit flirty with him. "Cutie" was pretty much her pet name to Ash and some had a bit of fun taking this actual in-game quote from her a bit out of context which was "I'm gonna take you down". (Though to be fair Maghan Hollingshead's somewhat sultry take on that line didn't help preventing any dirty thoughts.) She is still defintely a force to be reckoned with in battle of course, she is not one of the hardest opponents but its not exactly a breeze either. Pokemon Puzzle League is a genuinely good Tetris-like game in its own rights. But its still rather amusing on how NOA would fully add this in themselves let alone allow it. In her other appearances in the game she is just pretty much there as your opponent later on in the game with different designs. (Sometimes even different hair colors too, in Pokemon Stadium she is a blond while in Pokemon FireRed/LeafGreen she is a red-head.)


Overall this is one of the most memorable episodes in the Pokemon series most defintely. It may not be the only remotely unique episode. (Yes folks despite popular opinion not EVERY episode of the series is the absolute exact same.) But here is the retrospection of a rather peculiar Pokemon episode. Hoped you enjoyed it, and the next time I do a feature like this it'll be on the original Rugrats series. (Yes believe it or not there actually is an episode I can do a feature like this on.) Until then see you next time!
3
Login To Vote!
More Articles From Pokejedservo

7
Pokejedservo
Top 5 Video Game Remakes
My 5 picks as the best Video Games that are remakes of previous titles.
6
Pokejedservo
Rugrats: Angelica's Twin
My takes on unique episodes of famous TV shows continue on with this time on everyone's fave show about Babies.

7
Quote O' Matic
Wheezie: "I want to ride the roller coaster dragon so bad I can taste it!"
Ord: "Really? What does it taste like?"
Cassie: "Ha ha ha! It's an expression, Ord!"
Ord: "Oh. What does an expression taste like?"
Added By: funguy10
Dragon Tales
Related Articles

13
dalmatianlover
dalmatianlover's cartoon batch
Inspired by TreyVore's list, here are my favorite cartoons.
-5
dalmatianlover
Top 10 Cartoons of my life
This is my top 10 list of animated tv characters that stole my heart.