My takes on unique episodes of famous TV shows continue on with this time on everyone's fave show about Babies.
By Pokejedservo
On 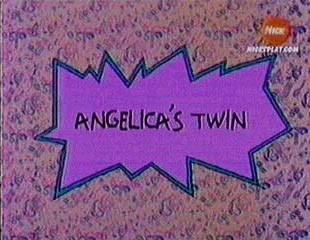 (Note: Credit for the pics go to Jonathan Sario of Fuzzycomics.com fame whom got most of these pics for me. And Luke from his Rugrats site on the last two)

Name of Show that has an episode featured in this: Rugrats (Original Series)
Episode Name: Angelica's Twin (Episode 97, Season 8)


When most of us think of great episodes of the series we generally go for the episodes from the earlier 90's. Its understandable for the most part however the episodes in latter 90's have had their value as well. There has been a pretty good amount of good episodes from that time. But this was easily the best out of them and one of the best in the series. Its a sad shame really that not all of the Post-movie episodes from the late 90's were like this. (And mind you this is coming from someone whom DOESN'T hate the post-movie episodes.) And yes Dyl is actually only a minor aspect in this just to let you, in fact he is hardly seen in it. But anywho on with the episode summary! 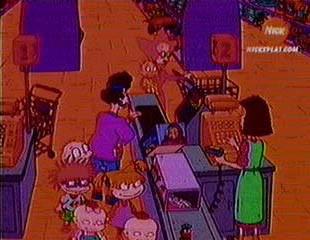 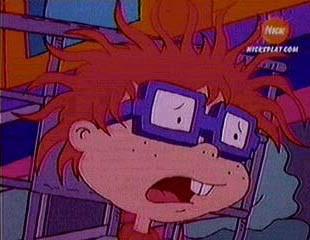 Betty, Didi and almost all the kids go shopping while Chuckie is being fearful. Overall nothing unusual so far.

While in the toys section Didi is getting Toys for Tommy and Dyl, one for each of them. Betty follows suit by getting toys for Phil & Lil as well. Angelica asks Didi and Betty why their doing that and they replied that their siblings and they get a toy each. Chuckie apparently doesn't mind that somewhat biased decision but Angelica sure does! But what to do she wonders... She wants to get new toys but she is an only child. However then something dawned upon her little 3 year old mind. She gets inspired by a nearby ball upon this "perfect idea". And with some slight alterations to her usual appearance she is now... 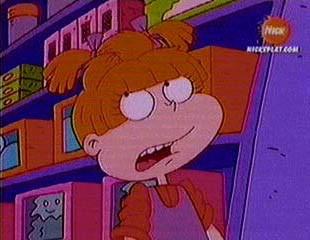 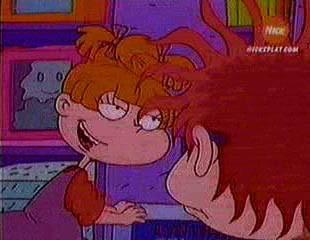 The brand new more pleasant version of Angelica here ladies and gentlemen. Yes Ballina might be a rather strange name.. But to be fair at least it sounds better than "Bizarro Angelica". ;) Why is she doing this you ask? Her plan is to trick Didi and Betty into thinking Ballina is her twin sister in order to get more toys. Sounds completely BS huh? Well after "Ballina" explains to them about herself so politely they agreed with it. She quickly goes off to hide somewhere to be Angelica again. After the shopping is done with while Didi is busy driving the cew back to the Stu Pickles Residence the kids wonder about this Ballina. Angelica promptly explains to them that she is her twin sister that walked all the way over here. In fact she even told them that Ballina walked all the way from Milwaukee to get here. (Pun slightly intended). They quickly became rather fascinated with Angelica's sudden new sister. Fortunately for them they'll be seeing very shortly... 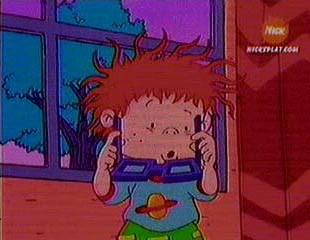 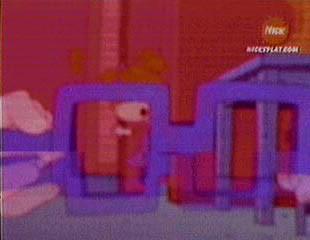 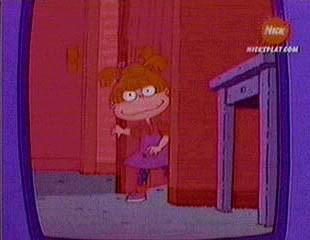 This is when Chuckie suddenly becomes a believer that if you try to maintain a good vision in life you just might like what you see.

At Tommy Pickles' house, the kids get to fully meet with Ballina face to face and see what she is actually like. Tommy, Phil and Lil grew fond of her very quickly and found it to be quite the relief that Angelica's "Sister" was so nice. (Makes it all the more understanding why Didi and Betty actually played along with Angelica's little ploy huh?) Dyl however was not convinced at all and just called Ballina his little "Baby nickname" for Angelica. Fortunately for her Tommy told him no and tried to tell him Ballina is indeed a different. Did Chuckie fare any better with her? Oh yeah in fact he pratically fell in love with her. Yep believe it or not young Chuckie is in luv with Angelica's more pleasant alter ego. (Though to be fair Ballina actually flirted with him by calling him a rather handsome boy while playing with his chin. Needless to say any chances of Chuckie desiring to be a doggy have increased many times over.) 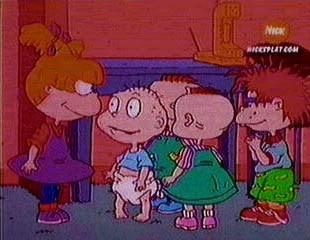 Ballina with the babies and a rather eager Chuckie

Ballina has a rather nice chat with the babies and shares her toys with them though one of the main discussion subjects is about her "sister" Angelica on how she treats them. She asks them how nicely she is treating them however they pretty much gave her a good run-down on how her "sister" can be. All 4 of them mentioned all the various mean things she does to them over time. Ballina tries to get them to recall anything remotely positive but of course they can't think of any. Though Tommy reassures Ballina that with her around well who cares as long as they have Ballina. Ballina of course promptly left the area and Angelica gets rather annoyed. I mean how dare they prefer Ballina over her? Though Chuckie's last statement was the one that got her annoyed enough to walk away. Amazing on how Angelica is the only lady to get jealous over herself huh? Okay, okay I was just kidding but still nevertheless she quickly came up with another plan and... 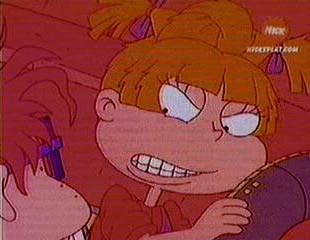 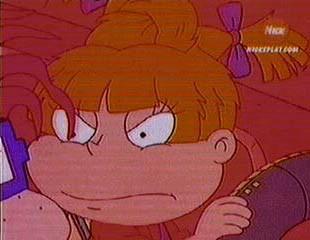 Angelica now tries to make Ballina look bad by playing as her suddenly grabbing the toy Chuckie was playing with away and states that she doesn't stinky babies anymore. Amazing on how Angelica sang a Blondie song in the first movie yet she does something that makes you think of a certain Bon Jovi song in this episode huh? Who knew such a little girl can be quite the little 80's fan huh? ;) Anyways all joking aside Tommy has come to the conclusion that being with Angelica has made Ballina mean and their all determined to stop that at once! They try to pull Ballina away from Angelica despite Angelica's obvious absence but it doesn't seem to be working. Angelica gets a little drastic here by heading over to the door and said bye to Ballina and see you in a bajillion years. (You can only imagine how hard she tried to stay sweet for that goodbye.) Tommy, Chuckie and the DeVille twins were saddened by her sudden "departure", Angelica reassures them that this is all the more reason why you can never trust those "nice girls". However there was one major flaw in that, Angelica took action so drastically she forgot to compltely get her look back to normal. They quickly noticed the traits of Ballina still on Angelica and now they found and were a bit shocked. Angelica walks over to Didi and Betty and tells them that Ballina went home and won't be around here anymore. And of course Didi and Betty reassured her on how that was okay and that Didi can live with only one niece around. (Heh they knew she was going to fess up eventually.) But how did the kids take it? Rather well actually... 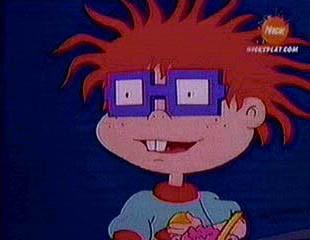 Chuckie: "Guys, one day I'm going to go up to Milwaukee someday to see Ballina again and when I see her I'm going to marry her."

Ladies and Gentlemen reading this very article, its an honor to present to you one of the most poignant endings in a Nicktoon episode since "Operation Ruthless" and "Pidgeonman" from Hey Arnold. As you can see from the above pic, Chuckie did quite genuinely fell in love with Ballina and one day aspires to marry her. He now knows very well that Angelica was really Ballina all along now but he did not care. He loved Ballina despite all of that, kinda says something about the little guy huh? The others agreed and wanted to marry her too but they played that as a light gag. However they made it nicely emotional when he said it. 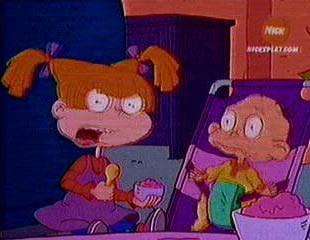 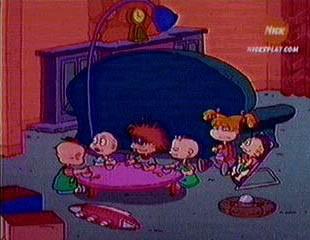 Angelica gets a little motherly while trying to shrug off their statements on Ballina, especially Chuckie's.

Angelica tries to tell him that she made up Ballina the whole time but apparently they didn't care though she was only slightly annoyed. Though she doesn't seem to take it too badly. Anyways that was pretty much the end of the episode. Its not hard to tell that its one of the reasons why Chuckie/Angelica fandom is existant nowadays and this episode has most likely made at least one of them a fan. (I know it did that for me.) The other episode with this one was Chuckerfly that did have some somewhat C/A moments, but things get a little more serious this time around in this episode. Besides even if you have no intrest in "couplings" this is still a rather well written episode anyways IMO. Will we ever see something like this again? Not too impossible actually consdering on how these episodes of the new "Rugrats: All Grown Up" series actually went. 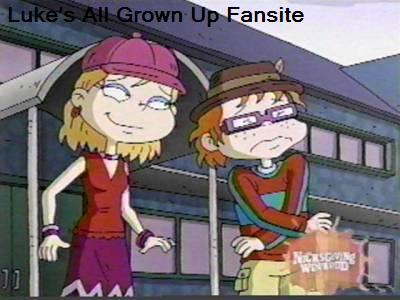 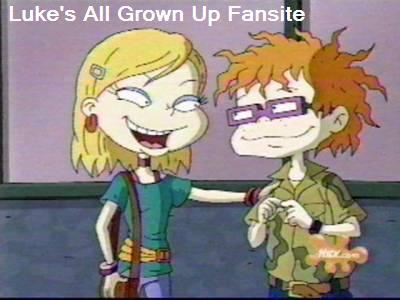 These two from the episode "Project Chuckie" to the left and to the right "Yu Gotta Go". Yes the spoofing of that certain popular anime during the episode on the right was pretty much lame but those two made up for it.

They don't do it a lot but they have started to do it more in the 2nd & 3rd season of the show and possibly will do more in the later one as well. Overall I hope you folks enjoy this article, I admit that I dunno which show I'll do an article on like this in the near future yet, but I'll think of something here. Anyways hope you like it.
6
Login To Vote!
More Articles From Pokejedservo

5
Pokejedservo
The truth on 4Kids' marketing
Here is a different look on 4Kids and their debateable intelligence in marketing.
4
Pokejedservo
The History of Ocean Group and Anime Dubs
A History of how Vancouver Canadian Voice Talent and Japanese Animation have had quite the history together over the years.

6
Quote O' Matic
Elder Gods: "The fate of the universe will be decided as it should be.. in Mortal Kombat!"
Added By: agod
Mortal Kombat: Annihilation
Related Articles

20
vkimo
From Rags To Riches
Do cartoon movies mean the end?

18
drooks
My Favorite TV Stations Part 2
A comprehensive review of why Nickelodeon will forever reign supreme - Part 1 of 4
An unhandled error has occurred. Reload Dismiss