Some of the painful and sometimes downright sick wrestling injuries in the 90's.
By System
On
In wrestling you often hear the WWE announcers referring to pro wrestlers as the greatest athletes in the world. They often comment upon the fact that for the most part, they are all in incredible shape, they perform several nights a week, every week of the year, and they dont get an off season. This is all true, but the fact that wrestlers continue to put their bodies through this hardship night after night means that they are obviously going to soften themselves up for eventual serious and even career threatening injuries. Of course, some of the injuries have very little to do with the conditioning of a wrestler, but sometimes they are simply just plain accidents...and of course, sometimes, wrestlers can just be morons.

Knee Braces on Both Legs 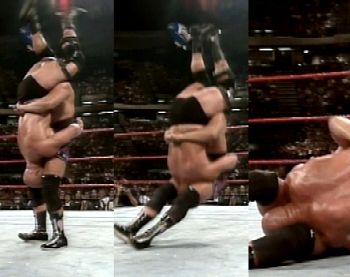 Stone Cold Steve Austins continuous neck injury has plagued him since the mid 90's and has lead to his retirement in 2003. Austins injuries to his entire body are due simply to wear and tear and his style in the ring. The real problems however date back to a tombstone piledriver which he recieved from Owen Hart in 1998, when Austin was just beginning to climb to Superstardom. Austins neck was broken at SummerSlam, and the WWE made a rather successful attempt at covering up the injury temporarily in an effort to continue to push Austin. He continued to show up on RAW week after week, wreaking havoc and delivering stone cold stunners aplenty, but he did not compete in any matches. Of course the fans noticed the lack of in ring matches, but they were willing to accept Austin wreaking havoc in other ways beacuse this hellraiser character was something new to the sport of Wrestling, and besides, back in 1998, the main reason to go to a WWE show was to see Austin deliver a Stone Cold Stunner, and as long as he was still delivering, audiences had no reason to complain. 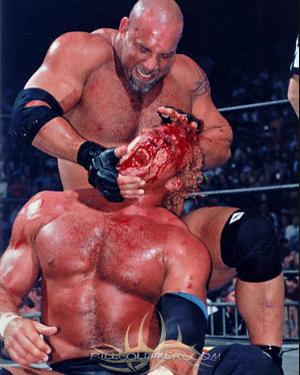 Sid Vicious, who was notorious for recieving a series of different injuries, suffered one of the most harrowing and disgusting leg breaks ever seen in wrestling at WCW Sin in 2000. Sid was one of the few big names remaining in an almost defunct WCW, and in an attempt to perform a diving Karate kick on Scott Steiner from the middle turnbuckle, his entire bodyweight crashed down onto his left leg, causing his foot, from the ankle down to bend in the exact opposite direction to the way nature intended. Sid stared in shock at the dangling leg for a moment, before screaming in agony. Sid has not wrestled since this incident, and officially retired shaortly after WCW closed. 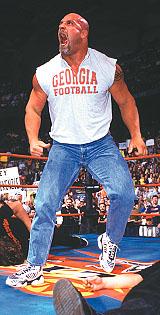 Bill Goldberg, the most promising man in wrestling it seemed in the late 90's, suffered a number of minor injuries during his run in WCW. It is strange to think that the most serious of the injuries he sustained, was self inflicted. In 2000, Goldberg chased after the nWo as they fled the building after attacking "da man" during an episode of Thunder. They escaped, and Goldberg was left staring at an empty limousine. Nobody could have predicted what would happen next. In a move that wasnt scripted, Goldberg screamed in rage and punched right through the side window of the car, shattering it instantly. Goldberg paused for a moment and looked at his hand, before screaming again and then slamming his hand on the hood of the car, sending blood spattering across the front of the limo, and further injuring himself. 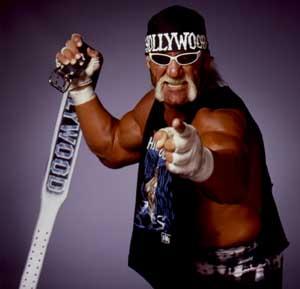 Hulk Hogan has had one of the most prosperous and lengthy careers that wrestling has ever seen, but his success has come with a price. Hulk Hogan suffered a major injury at WCW Spring Stampede in 1999 when Diamond Dallas Page locked him in a figure four leglock around the ringpost. Immediately it became clear that something had gone horribly wrong as Hogan screamed in genuine agony, which was a lot more convincing than his fake agonizing scream, but that goes without saying. All of a sudden, the show temporarily went on hold as his opponents Sting and Ric Flair stopped to check if Hogan was okay.
Eric Bischoff then emerged from the backstage area, and he had not been an on screen character in months. He ordered the cameras to be cut from Hogan as he was carried out of the arena by EMT's screaming "No, Dont touch it. Dont touch the thing"

Mick Foley, the most dangerous man in wrestling has sustained more injuries than possibly any other wrestler in the big companies, with the exception of ECW stars like Sabu etc. The most famous and prominent injury is the fact that he is missing an ear. Mick Foley, while performing as Cactus Jack in WCW, had a gimmick of being a complete madman, and so would tangle his neck between the middle and top ring ropes every night, choking himself half to death before releasing himself and having a good laugh. On one particular occasion though, in 1994, the ropes were tied far too tight and when Foley got caught in the ropes, he couldnt free himself. When the trainers came to the ring to free Foley, they pulled his head so hard that his right ear was ripped off in the process.

These are just some of the most memorable injuries from wrestling although there are in fact many more, such as the quadricep tear's of Triple H, Kevin Nash and Vince McMahon, the neck break of Chris Benoit and Rhyno, the dislocated elbow of the late, great Eddie Guerrero in his first WWE match and theres a whole bunch more too. The fact remains that nobody who starts a career in wrestling, ever escapes unharmed. 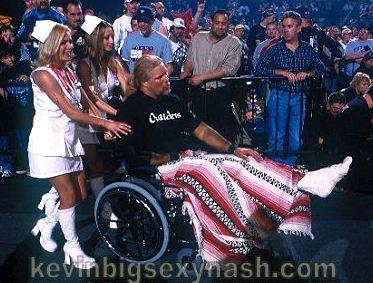 22
Quote O' Matic
Kevin: "This house is so full of people it makes me sick! When I grow up and get married, I'm living alone! Did they here me? *jumps up and down* I'M LIVING ALONE! I'M LIVING ALONE!"
Added By: System
Home Alone
Related Articles 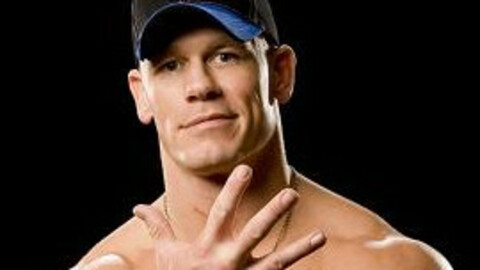 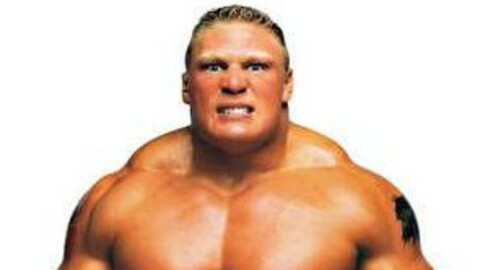 22
mcogfan
My favorite WWF wrestlers
A list of some of the greats that inspired me to watch the sport itself.
An unhandled error has occurred. Reload Dismiss