Coming off the mildly successful Ruthless Aggression Era and with no real competition for audiences. The WWE found itself steadily begin to decline while they began to groom it's new face of the company who will wield unprecedented influence within the company and McMahon's wife turning her eye to a more ambitious pursuit. The combination of these two factors would bring in a new era for WWE, a more family friendly era, an era of PG, an era of Pure Garbage.

At the tail end of the Ruthless Aggression Era, the WWE would find it's new face in the form of the worst human being to ever step foot in a wrestling ring. 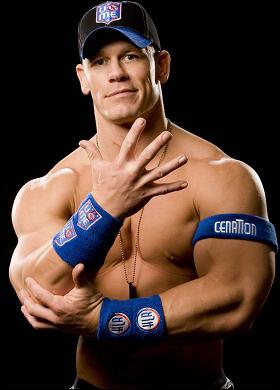 This man represents everything wrong with professional wrestling. Just the mere sight of this putrid waste of human oxygen makes me wanna vomit. This living breathing walking turd is the sole reason for the death of professional wrestling. This cancer of a human being infected the WWE in 2003 as a tolerable if mildly entertaining heel rapper. The cancer finally spread to the top when this sack of maggot bile won the WWE Championship in 2005 then proceeded to desecrate the sacred title into a bling bling piece of crap with a spinning emblem used to hypnotize his fanbase of brain dead children and weak kneed sluts who cheer for him. Following this, Cena would permanently embed his lips firmly in McMahon's ass, going on to win the WWE Title a blemished record of 10 times. Many wrestling fans try to compare Cena to Hulk Hogan who also portrayed the ultimate good guy that defied the odds with Superman-esque abilities. They fail to realize however the numerous performers that Hogan put over such as Ultimate Warrior, Yokozuna, Undertaker, The Giant, and Goldberg just to name a few. Hogan also made the fateful decision to shake things up a bit by turning heel and forming the NWO, something that Cena is too cowardly and gutless to even entertain the thought of for fear of losing his only fanbase, something that Hogan never had to worry about as his fanbase of children remained firmly on their hero's side, something this soft and PC generation couldn't even comprehend. Not only is Cena one of if not the most untalented, uncoordinated, and stiff performers to ever step in the ring, his promos range on the verge of boring, nauseous, and downright pathetic as he attempts to make people laugh with his cheesy and cringe worthy humor. Despite his skills or lack thereof in the ring, his autistic fans love to point out his numerous charitable efforts and nice guy personality, I say not so fast. What many people do not know is how Cena has used backstage power and prostitute like talent of fellatio on McMahon to hold back many bright and talented future performers who I pity whenever they draw the sad straw to try and make this piece of elephant shit to look good, despite the lack of respect he shows them by downright refusing to return the favor as evidenced in his match with Shawn Michaels at Wrestlemania 23 which saw Michaels screaming and berating Cena the whole match for refusing to sell his "injuries" in order to make the show believable. It's also been revealed that Cena cheated on his wife with a porn star named Kendra Lust, an affair that lasted over 3 years and resulted in Cena's divorce. It's also been revealed that Cena was the driving force in the release of a performer named Tyler Reks who's finishing move Cena believed resembled his finishing move and thereby warranted the poor kid in losing his job. Cena has all but killed legitimacy in professional wrestling, by being thrown into a spotlight by the Big Show only to "triumphantly" return the very next night with no sign of injury whatsoever. It was also Cena that suggested to Vince McMahon that he turn his entire product more family friendly and cater to his one and only idiot demographic. Cena also serves as the reason many diehard and true WWE fans never see or hear Jim Ross, the legendary voice of the Attitude Era, with Cena's "buddy" the irritable and nauseating Michael Cole taking the legend's spot as head announcer with a very tame and watered down Jerry Lawler. Twenty years from now when wrestling historians point to the death of mainstream professional wrestling, they will no doubt claim this putrid, boring, stale, walking, talking, statue of every kind of mammal shit the very reason for it's downfall.

Sorry, rant over, but I just can't begin to describe how much hatred and contempt I have for Cena for killing everything great and glorious about professional wrestling. Now onto the next star of this era, a star who tries to shine a glowing beacon of hope as wrestling's last savior, a straight edge savior.
CM Punk 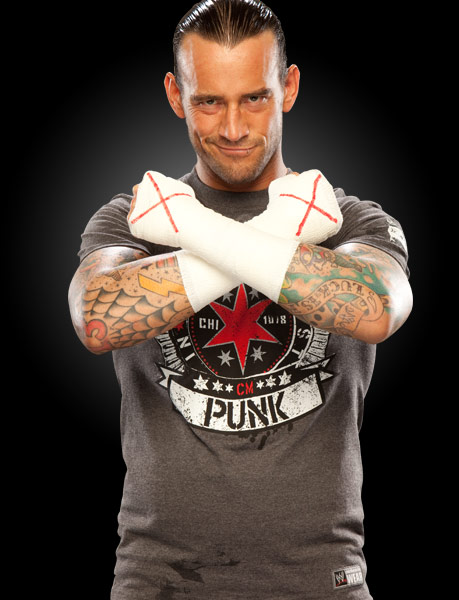 While Cena represents everything that is wrong in professional wrestling, CM Punk represents everything that is right. Making his way through the top of various independent promotions such as Ring of Honor and TNA (while Cena was nothing but a bodybuilder with a pretty smile), Punk finally worked his way to the top in WWE. Debuting in WWE's own version of ECW in late 2006, Punk exploded onto the scene proudly announcing his straight edge philosophy of no smoking, drinking, or drug use, a philosophy that is certainly to be respected and admired. After being a 2 time Heavyweight Champion and taking part in intense feuds with Jeff Hardy and Rey Mysterio which saw Punk take on a more militaristic straight edge personage as he gathered a group of followers known as the Straight Edge Society and he representing their Christ like savior. Moving on from this, Punk would set the wrestling world a buzz with a groundbreaking and refreshing promo which saw Punk vent out all his frustrations with the company and the way Cena bullies the mid card and under card talents and is handed gift wrapped WWE Title reigns on a silver platter merely by kissing McMahon's ass. During the promo, Punk would bravely state that the company would be better off once Vince McMahon is dead (a statement I whole heartily agree with). This promo would be forever known as a Pipe Bomb given it's ability to explode with scathing remarks of true statements in a fake industry. After this Punk would be shot into the stratosphere of wrestling greats for not only winning the WWE Championship but holding onto it for a modern record of 434 days, the longest championship reign in 25 years. This reign would see Punk feud with the likes of Cena, Daniel Bryan, and the most entertaining and personal of all, Chris Jericho, a feud that would see Jericho take advantage of Punk's straight edge philosophy by trying to push Punk to break his code of honor by referencing Punk's alcoholic father and drug abusing sister. While his golden tongued promo skills are Punk's most entertaining quality, it's also his great and almost pitch perfect wrestling skills that make Punk truly, the best in the world.

Many other talented and entertaining superstars would debut in this era such as Daniel Bryan, who has been reduced to nothing more than a comical goofball, and Dolph Ziggler, who has a bright and shining future once Cena is gone. However this era would also serve as the push for many boring, talentless, and sleep inducing performers such as Sheamus, a pale white, corny joke spouting waste of space, The Miz, a former MTV reality star (that's all you need to know), and Alberto Del Rio, a crappy, bland, Mexican Cena. The future of the company seemingly and hopefully looks bright in the hands of such stars as Wade Barrett, Damien Sandow, Cody Rhodes, and Antonio Cesaro once Cena, Orton, and McMahon are all but gone forever.

Serving as undoubtedly the worst era in professional wrestling, there have been few and I mean FEW exciting and entertaining moments such as the invasion of Nexus, a group of rookies from WWE's developmental show NXT, an intriguing stable that served as a breath of fresh air into a stale and boring product only to be dismantled and defeated SINGLE HANDILY by..you guessed it John Cena. Another entertaining moment besides the aforementioned Pipe Bomb by CM Punk would be the debut of a new stable from NXT known as The Shield comprised of two talented independent wreslters in Dean Ambrose and Seth Rollins, joined by former NFL player Roman Reigns. So far The Shield has been the only bright spot in an otherwise extremely dark period of professional wrestling.

So far the PG Era has proved to be disastrous for the WWE which has seen it's TV ratings reach record lows and steadily declining merchandise sales and attendance figures. Being PG, WWE has banned all blood, profanity, and sexual themes that made it the unquestioned king of professional wrestling in the Attitude Era. WWE has sadly turned its back and insulted it's millions of loyal wrestling fans by showcasing a product of laziness, incompetence, and downright stupidity. Virtually every wrestling fan puts the blame solely on Linda McMahon who decided to run for U.S. Senate in 2008 and 2012, both campaigns that saw her squander and waste over 100 Million Dollars and insult her hardworking staff by refusing to pay them for their efforts. Thankfully the geriatric whore lost both campaigns in embarrassing fashion. I personally do believe that her fruitless campaign was a driving force behind an industry that I have passionately loved since childhood to die a sad lowly death along with Cena's repugnant and distasteful backstage tactics. Not only has this era seen the death of hardcore wrestling, but also has boasted an extinct tag team division with only a group of random singles performers to be paired up, a dead divas division that exists for eye candy alone, and the degrading and embarrassing treatment of the Intercontinental and United States Championships that once served as the second most prestigious titles in the business.

Yes the industry of mainstream Professional Wrestling has fallen so far from grace that I feel downright ashamed to call myself a wrestling fan, scratch that a FORMER wrestling fan. From the shining Golden Era to the inspiring Next Generation Era to the groundbreaking and game changing Attitude Era, to the wild and unpredictable Ruthless Aggression Era to the boring, stale, embarrassing, stupid, cheesy, horrid, putrid, ridiculous, and downright SHITTY PG Era. Perhaps there will come a day when I can once again call myself a wrestling fan with pride and admiration, when that day comes, no one can see. Perhaps it will come when Triple H takes over from the senile, egotistical, and decrepit sack of shit that is Vince McMahon and brings pride and legitimacy back to professional wrestling, one can only hope.

This concludes my series of articles detailing the history of mainstream professional wrestling eras. I thank you all very much for taking the time and consideration to read all of these articles, but more importantly I appreciate all the kind comments I've received throughout this process and I thank you all from the bottom of my heart. Thank you so much and I promise I'll return with more articles covering a variety of different pop culture aspects. Now for the final time, I sincerely wish you all a good fight and good night.
5
Login To Vote!
More Articles From luv90s

10
Quote O' Matic
Bertram: "[after Wendy Peffercorn pulls Squints from the pool] God, he looks like a dead fish. -Bertram"
The Sandlot