These were my favorite cartoon cartoons that were on cartoon network during its prime.
By TweetyBird675
On
#10 Foster's Home For Imaginary Friends 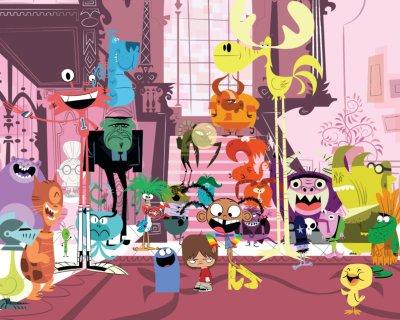 This was one of the best cartoon network they made after they revamped themselves in 2004. This show was funny, silly, and most of all creative and original. It was also created by the creator of the Powerpuff Girls. Bloo was such a jerk. I always thought of him as the kid version of Cartman on South Park.The reason why its so low on this list is because I didn't grow up on it but that doesn't mean I love it any less. Another great cartoon cartoon, gone.
#9 Time Squad 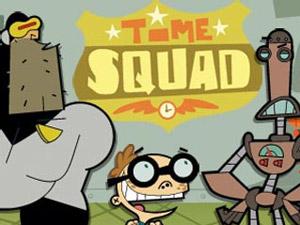 Now alot of people don't remember this show but I found it strangely likable. I thought this show was educational in a right way. It showed you stuff about history that wasn't in a boring way. It was funny, zany, and wacky. Just what I find in a good cartoon. And of course, creative. I would watch this show every Sunday night having that dreaded feeling of going back to school. Too bad it didn't last long. Could've had a bigger fan base, but oh well.
#8 Codenamed: Kids Next Door 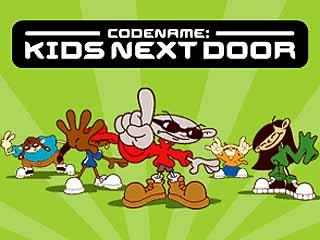 Come on! This show was so original and creative you just couldn't hate it. Sit there with a straight face and tell me you didn't want to be a member. Anyway, this was a very great show and it was funny. My favorite characters were numbah 2 and numbah 4. They weren't exactly stupid, just wasn't completely smart. One of my favorite episodes was when Numbah 5 got sick and we got to meet her dad. He was such a spoof off of Bill Cosby. Whenever he spoke I was on the floor dying laughing because it sounded just like him. Great show for the 2000s.
#7 Courage The Cowardly Dog 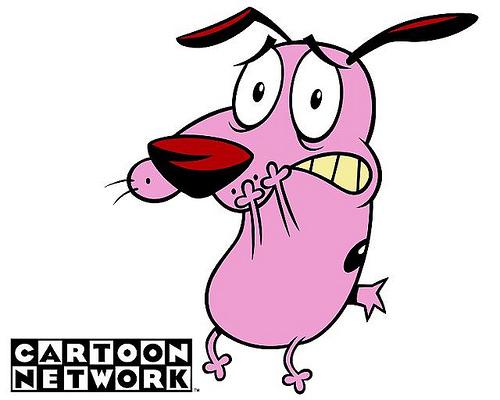 This show was just Cartoon Network at its best. This show was just crazy. It was absolutely hilarious and wacky. I always wondered how such a cowardly dog in the middle of nowhere could attract so much evil to himself. One of my favorite episodes was when that ugly man came to live with them and Eustace kept making fun of him. That episode was hilarious. Truly a gem.
#6 The Grim Adventures of Billy & Mandy 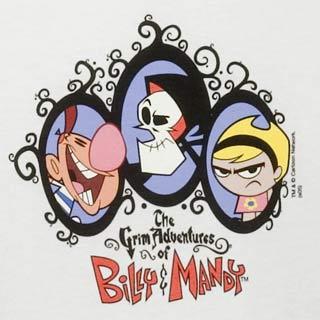 Oh my God, I love this show. I have a thing for cartoons with dark humor. (Courage the Cowardly Dog, Invader Zim, etc.) But this show was dark and just so freaking funny. I don't understand how a Grim Reaper can have a Jamaican accent but it was funny and it worked. Now Billy, he was the epitome of stupid. Now there are alot of stupid cartoon characters but Billy sticks out the most. I love this cartoon and it is still alot of episodes that I need to catch up on since it got cancelled but oh well. All good things must come to and end.
#5 Cow & Chicken 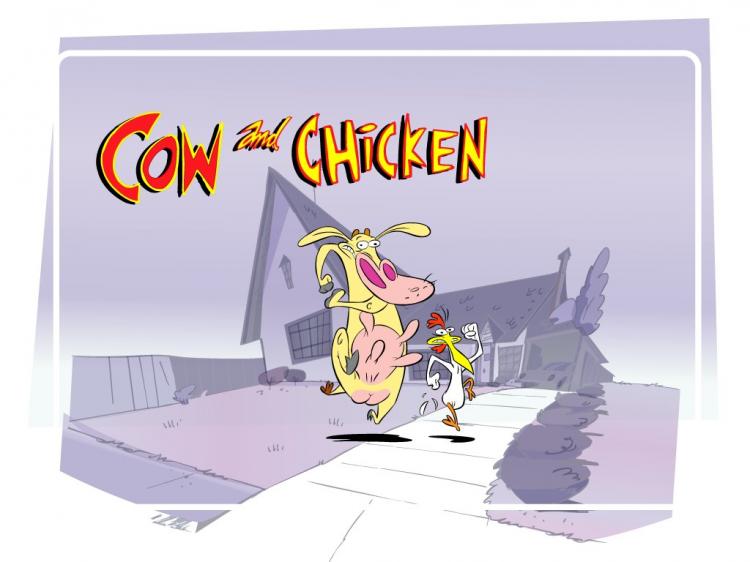 This show was so wierd and so many butt references it was disgusting. And I loved it. Although I wasn't a fan of its sister show I Am Weasel (found it kind of boring) I was always looking forward to Cow and Chicken. It only lasted two years but it was two years well spent. All it was was fun and that's what it gave me. Memorable.
#4 Johnny Bravo 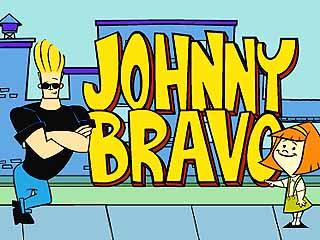 Who doesn't remember Johnny Bravo. If you don't, you need to smack yourself. Okay, Johnny Bravo one of my favorite original cartoon cartoons because it was funny, stupid, lovable, and fun. I remember back in 2000 when Johnny Bravo had its own request line. I thought it was pretty good even though it didn't last long. One of my favorite episodes was when Johnny was trying to woo this girl who was into hip hop and everytime they used a hip hip slang term he would just be looking all confused like, what. Truly a favorite for many Cartoon Network fans.
#3 Dexter's Laboratory 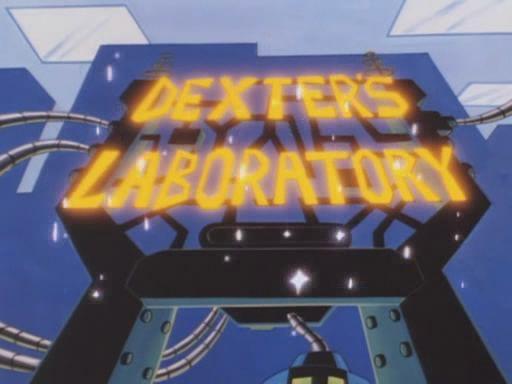 Wow, nostalgic memories right here. I cannot remember one Dexter's Laboratory episode that didn't make me smile.This show is very special to me because me, my brother, and my cousin could reflect on it. We grew up on this show. This is one of Cartoon Network's funniest shows ever, I kid you not. The funniest episode to me was when they was infected with the boy band virus and they was making fun of N'Sync. I was on the floor laughing. (Baby, baby. Can't you see. Its got to be you and me, forever.) I thought that was hilarious. Dexter is and still is one of Cartoon Network's best shows and it is greatly missed.
#2 Ed, Edd, n Eddy 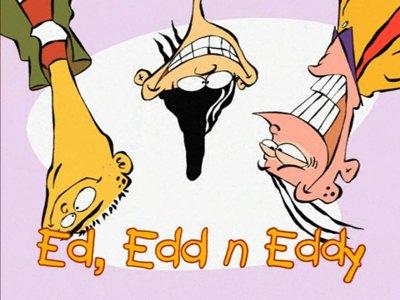 Did you not expect this show to be on the list! This is one of my favorites. Am I the only who thought Jimmy was gay. Anyway, this show only revolved around one plot: getting a quarter but always failed unsuccessful. I thought this show was hilarious and was greatly upest when it ended but at least it ended with a movie. One of my favorite memories was when I was watching the episode when they got old and they was reminiscing on all the good times they had. I was sad because I thought that was the last episode but it wasn't but now the show is over. I will never forget Ed, Edd, n Eddy. One of the most special shows on that network for me.
And number one is....
#1 Powerpuff Girls 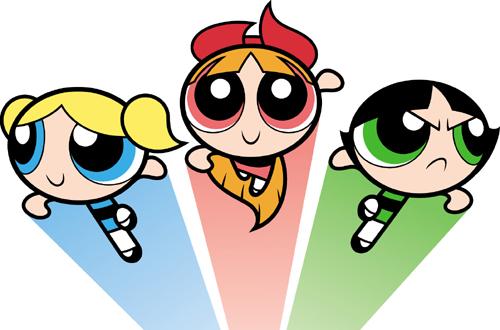 Now this is nostalgic for me. I remember coming home every Friday, finishing my homework with a slice of pizza in hand ready to watch a new episode. Me and my friends used to play each girl and I was Bubbles. When I was six I got the little watch and light up shoes on my birthday. Great memories. When the Rowdyruff Boys came, I had a tiny little crush on the red one. I always thought he was bad and so cute. I was so innocent at the time. I was very disappointed when it got cancelled but not very surprised. I really miss this show and I'm hoping to get the complete series on DVD soon. Everyone needs something to reflect on or say I remember that. It never fails to make me smile.
_______________________________________________________

Well, those were my top ten favorite cartoons. I really miss the old Cartoon Network. Toonami was so awesome. I used to watch Dragon Ball Z, Yu Yu Hakusho, Rurouni Kenshin, Sailor Moon, there is just too many to count. The thing that I loved about Cartoon Network was that it appealed to everybody. Adults, kids, teenagers. Everybody had something to love on that channel. I got into Looney Tunes, Tom and Jerry, and The Flintstones because of Cartoon Network. I am sad that all these great shows have ended its run but I know one day if we still keep hope they'll come back sooner or later. If not, we still have our cherished memories. I hope you enjoyed my article. Stay Gold.
4
Login To Vote!
More Articles From TweetyBird675 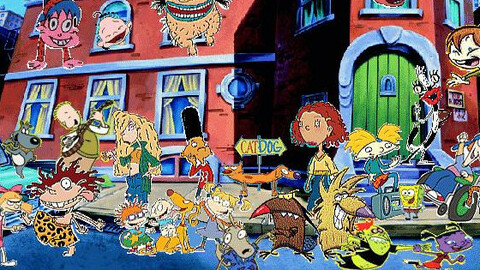 29
Quote O' Matic
Homer: "It seems you were caught, by the very man trying to catch you."
Skinner: "How ironic."
Added By: System
The Simpsons
Related Articles

23
BoGaudi
Top ten scary movies as a kid
Its all in the title my friend
More Articles
An unhandled error has occurred. Reload Dismiss