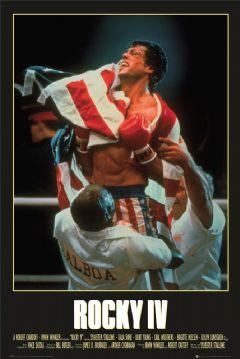 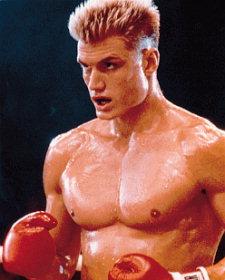 I love the Rocky movies, but this one is my favorite out of the series. It has a great 80's vibe to it, it has great soundtrack featuring great songs such as: There's no easy way out, In the burning heart, and Hearts on fire. In this movie, Rocky Balboa wants to fight the russian boxer Ivan Drago, after Drago kills Rockys close friend and former heavyweight champion Apollo Creed in an exhibition match.
Ivan Drago is played by Dolph Lundgren (who is Swedish, like me) and he actually pulls of a pretty good russian accent as he delivers such awesome oneliners as "If he dies, he dies." and "I must break you." Overall, I think Rocky IV is a great and epic movie. 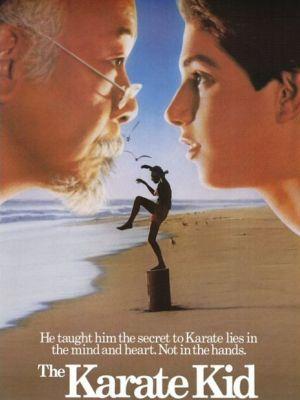 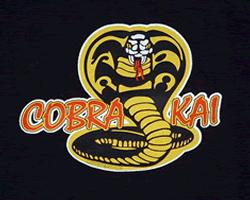 The Karate Kid is just as epic as any Rocky movie, it's about a boy named Daniel LaRusso who moves to Los Angeles with his mother. Right from the start he feels he doesn't belong there. He has constant problems with his new girlfriend Ali, and gets bullied by a Karate group called Cobra Kai, lead by Alis ex-boyfriend Johnny. But then Daniel befriends Mr Miyagi, the handyman of the building where Daniel lives. Mr Miyagi shows Daniel how to trim bonsai-trees, and after saving Daniel from the Cobra Kai, he agrees to teach Daniel Karate. Daniel parttakes in a Karate tournament, beats the Cobra Kai, and regains his honor. The Karate Kid is a great movie, Mr Miyagi is an awesome character and the boys of the Cobra Kai along with their trainer John Kreese make great villains. 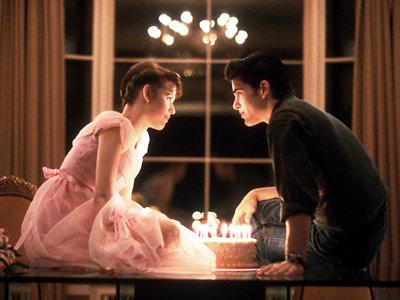 Sixteen Candles is directed by great 80's director and writer John Hughes. It's about a girl named Samantha Baker, played by one of my favorite actresses Molly Ringwald. Samantha is feeling very down. Her whole family forgets her sixteenth birthday, because they are to busy planning her sisters wedding, she is to shy to tell the popular Jake Ryan she has a crush on him, and she is being stalked by a nerd played by Anthony Michael Hall. Sixteen Candles is a very funny movie, and of course, Samantha and Jake Ryan becomes a couple in the end. It has plenty of hilarious characters, such as Samanthas grandparents, and Long Duk Dong, a stereotypical chinese guy with great lines. 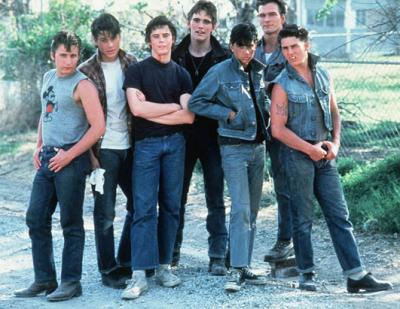 The Outsiders has a lot of really famous actors before they were famous. The main cast consists of C Thomas Howell (Soul Man), Ralph Macchio (The Karate Kid), Matt Dillon (There's something about Mary), Emilio Estevez (The Breakfast Club), Patrick Swayze (Dirty Dancing), Rob Lowe (Youngblood) and Tom Cruise (Top Gun). It's about a gang of greasers living in Oklahoma in the 60's.
They're rivals, the socies, are rich kids and the two groups hate each other because they are different. One night when Ponyboy (C Thomas Howell) and Johnny (Ralph Macchio) are out walking, a group of socies pull up in their car. The socies are drunk and they want to fight. Johnny stabs their leader to death to prevent him from drowning Ponyboy in a fountain. After that accident, Ponyboy and Johnny have to hide out in an abandoned curch for a while. After a while, Dallas (Matt Dillon) comes to the church to take them home. On the way they see another church, there are children inside and it's burning! The boys rush in to save the kids. Then there's a big fight between the greasers and the socies, which the greasers win. Ponyboy and Dallas go to the hospital to tell Johnny about the fight, but Johnny is dying from the burn damages. Dallas has a breakdown, robs a local store, and gets shot to death by the police.
The Outsiders is a very sad yet brilliant movie. It was based on a book, and directed by Francis Ford Coppola. 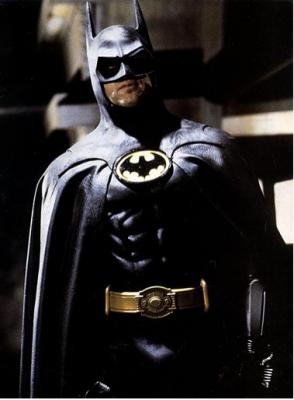 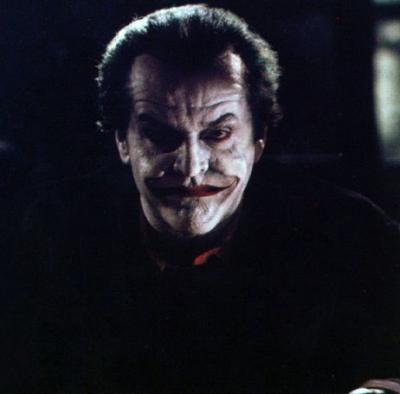 Let me just start by saying: I love Batman! I love the movies (except maybe Batman & Robin), the animated series, the comicbooks, the graphic novels, pretty much everything. I even have two Batman tattoos. Well, now back to the movie. The reason this movie is so low on the list is because this is a top ten list of my favorite 80's movies, not my favorite Batman movies. The movie is about Bruce Wayne, a millionaire who became the vigilante hero Batman after his parents where killed in front of him by a robber when he was a child. One night a group of mobsters lead by Jack Napier break into a factory called Axis Chemicals to steal some documents.
Batman shows up, and accidentally drops Napier into a vat of chemicals. Napier survives, but the chemicals has turned his skin pale white, his lips red and his hair green. It has also driven him insane. He is now the Joker, who thinks Batman is stealing all the publicity that he deserves. The Joker uses his own chemical mixture called Smylex, to kill people, giving them a permanent smile as they die. Towards the end of the movie Batman realizes that Jack Napier was the robber who killed his parents, and so he flies of in his plane, the Batwing to confront the Joker. The Joker kidnaps Bruces new girlfriend Vicki Vale, and takes her to the top of the Gotham Cathedral. Batman confronts the Joker but the Joker tricks him, and tries to escape in a helicopter as Batman and Vicki hangs from a ledge on the tower. Batman fires a grappling hook tying the Jokers leg to a gargoyle statue. The staue breaks of and falls, dragging the Joker with it. The Joker dies.
Batman was directed by Tim Burton and is by many considered the thing that made Batman into the dark and serious character he is today.
Number 5: 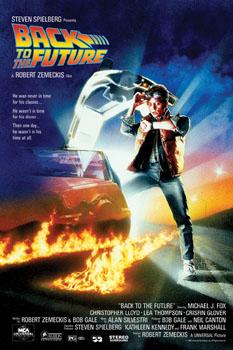 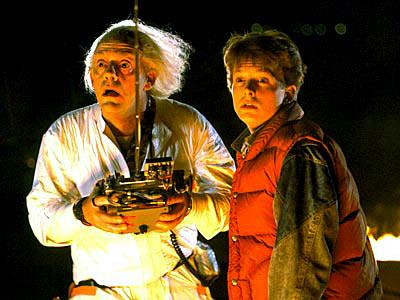 Back to the future is about a boy named Marty Mcfly and his best friend doctor Emmet "Doc" Brown. Marty accidentally travels back in time to 1955 in a time machine that Doc has built out of a DeLorean. Back in 1955, Martys mother falls in love with him. Marty locates Doc and manages to convince him that he really is from the future. Doc finds a way to send Marty back to 1985, but first Marty must make his mother fall in love with his father, or Marty and his siblings will never get born. This movie is kind of confusing the first time you watch it, but it is a really awesome movie. Along with Back to the Future 2, and Back to the Future 3, it makes my favorite trilogy. 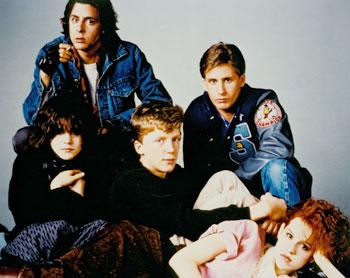 The Breakfast Club is directed by John Hughes who also directed Sixteen Candles (above), and what makes this movie so great is the writing. It's about five teenagers who has to sit through detention together for a whole day. They all hate each other at first, but at the end of the day they are friends. They discuss each others problems, such as why they are in detention. They also smoke weed and dance together. The teenagers are all great characters, but especially John Bender, the rebel badass. This movie could easily be performed as a school play, because it takes place in the same room most of the time and it doesn't require any special effects. 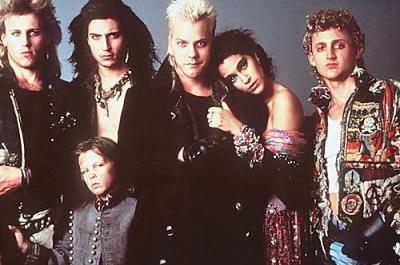 The Lost Boys is directed by Joel Shumacher who's also made other great movies such as S:t Elmos Fire and Batman Forever, and terrible movies such as The Number 23 and (cringe) Batman & Robin. It's about two brothers and their mother who moves to a town called Santa Carla to live with the mothers dad. At first glance it seems like a great town, with an amusement park, a beach, comic book stores and live conserts, but the town is actually plagued by a group of vampires. Michael, the older brother starts to hang out with some other boys of his age, a motorcycle gang lead by David (played by Kiefer Sutherland), while the younger brother Sam befriends the vampire-hunting Frog brothers Edgar (played by Corey Feldman) and Alan. It turns out that David and his friends are vampires, and they want Michael to become a vampire too. Michael tells Sam about it, and it's now up to the Frog brothers to stop the vampires. I won't reveal the ending, cause it's quite a neat twist for those who haven't seen it. It has great songs such as Cry little sister, Walk this way, Lost in the shadows and People are strange. It also has a song called I still believe which is performed by the artist Tim Capello live on stage in the movie. 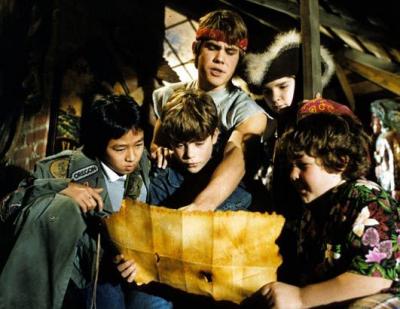 I love this movie so much I want to marry it. It was a really hard decision if I would place this movie on first or second place, because I love it so much, but in the end I decided it's the second best. The Goonies is directed by Richard Donner who also directed Superman, and the Lethal Weapon movies. It's about a group of kids who calls themselves the Goonies. One day they are all hanging out at Mikeys house, Mikey is kind of their leader. They are all sad because their houses are being torn down, forcing them to move to different towns. They go up to the attic of the house, where they find an old pirate treasure map, which they decide to follow just in case they find some "rich stuff". Mikeys older brother Brand tries to stop them, but they trick him and go out to hunt down the treasure. The map takes them to a closed restaurant, where they run into a family of criminals called the Fratellis, consisting of Mama Fratelli
and her sons Jake and Francis. The Goonies go down into the basement of the restaurant where they find a tunnel leading to the treasure, and then they have to go through a series of Indiana Jones-style traps, before they finally find the treasure, with the Fratellis constantly chasing them. This movie is awesome. It has a great look and style, Corey Feldman is in it, and it also has a great theme song: The Goonies r' good enough, by Cyndi Lauper. When I think 80's, I think this movie.

And now for my number one favorite 80's movie of all time (which is also my favorite all time movie ever): 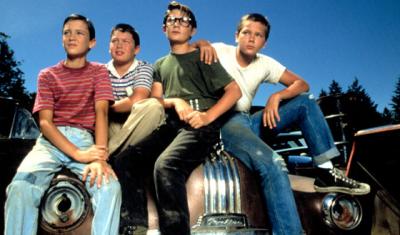 I love this movie so much that I would cheat on the Goonies, and start a second family with this movie. It's about four boys in the 50's who are going a long way to look at the dead body of another boy the same age as them. Meanwhile a group of teenagers lead by Ace Merril (played by Kiefer Sutherland) also want to get to the body, because they think they will get a reward and get famous. Corey Feldman is in this movie too (damn it, he used to get great parts!) and it's main theme song is Stand by me, by Ben E King. It's pretty obvious that the movie is named after that song, because it's based of a novel called The Body, by Stephen King, but I don't mind that because I think Stand by me is a better title than The Body, at least for a movie.

Remeber this article is written IN MY OPINION, so when I say a movie is good, or bad ore whatever I don't mean it as a fact, it's just what I think, ok?
Now keep in mind this is my first article here on Retrojunk, and I know the sentence structure is kind of weird some times, but that's because either A: I'm swedish, and not very used to writing this much in english. Or B: I wrote the whole article without taking any pauses, so I got kind of tired. My next one will propably be shorter. Anyway, I hope you enjoyed reading it as much as I enjoyed writing it! Merry Christmas.
27
Login To Vote!