The story of JonBenet Ramsey, a young pageant queen whose death shocked a nation.
By Mad_about_drumming_87
On
Hello, fellow Retrojunkies. For my first act, I have chosen a subject that no one on here has yet attempted to touch on. I mentioned awhile back in the "Famous deaths" article that I was going to try and write an article for the tenth anniversary of the worst crime of the '90s. Here it is...reintroduce yourself to a little girl lost.


The day was December 25, Christmas day, 1996. 6 year old JonBenet Ramsey woke up that morning to celebrate Christmas with her family. Little did she know, that it was to be her last day alive. But before we divulge into what has been the intense subject of debate, not to metion the most heinous crime of the 1990s, we'll start off at the beginning. This is the story of JonBenet Ramsey, a Colorado pageant queen who was robbed of her life far before her time. 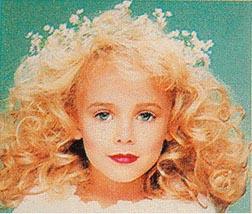 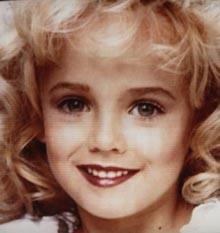 
The story starts off in Atlanta, Georgia, where on August 6, 1990, JonBenet Patricia Ramsey was born to Jon and Patsy Ramsey. When she was a year old, her family moved to Boulder, Colorado. From there, she would go on to hold several child beauty titles, including Little Miss Colorado. You could say that this was genetic, as Patsy Ramsey had also been a beauty queen, having won Miss West Virginia in 1977. Not much is to be written about JonBenet's life, as it was far too short. This is where the story takes a turn for the bad. It is the part that everyone remembers, the day she was taken away.


On December 26, 1996, Patsy Ramsey found a ransom note, much to her surprise. JonBenet was also nowhere to be found on this fateful day. That afternoon, Jon Ramsey and a friend searched the basement of his home for anything unusual, at the request of a Boulder Police detective. What they found was inconceivable: the body of little JonBenet covered in a blanket.
Her autopsy said that she had been killed by strangulation, and likely sexually assaulted, though there was no visible evidence of such an act. This began a long investigation, as well as speculation by the American Public. Some even went so far as to say that "daddy did it."
(This phrase was spraypainted on her grave in the heat of the investigation.) For several years, the case kept popping up, though mostly in false gossip magazines. Eventually, the case died down when the investigation was called off. 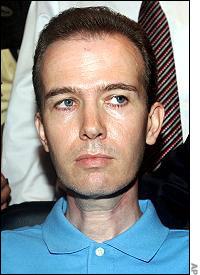 
This is John Mark Karr. His eyes convinced us that he was the killer.


This December 26 will mark the tenth anniversary of this tragic event. I was nine years old when this happened. How anyone could kill a child was beyone me back then, and I have since learned the sad, sad truth that there are people in this world who are sick enough to do this kind of thing. Some are caught, and given their just desserts. But we may never know who killed a little beauty queen from Colorado. Books, documentaries, even a TV movie have been made about this tragedy. It has also spawned several tribute videos on Youtube, as wellas several memorial web pages. So, when you celebrate Christmas, or whatever you do on this day, remember to keep the Ramsey family in your thoughts. Remember a little girl who was taken from the world far too soon. 18
Quote O' Matic
Major Payne: "Move it, you turds! You'll get no sympathy from me! You want sympathy, look in the dictionary between "spit" and "syphilis!"... You there! Tell Marlee Matlin's son to get across that rope before I hang him with it! -Major Payne"
Major Payne