At 15-1, the Minnesota Vikings became the team to beat in the NFC. This is their story.
By Mad_about_drumming_87
On
Hello again, fellow Retrojunkies. I mentioned in the comments for my first article (the one about JonBenet Ramsey) that I was going to write an article closer to the topics that should be discussed here. Thus, I came up with this season of dreams, the 1998 Minnesota Vikings, who nearly won it all, falling a game short in the NFC championship to the Atlanta Falcons. In a decade where the Cowboys were America's team reborn, it was nice to see my team go on a run like this. I have been a Vikings fan from birth, and this was the year I really became a big fan of the team.

In 1997, the Minnesota Vikings had been a halfway decent team, much like they were for nearly a decade in the late 80s and early 90s. They had made the playoffs in most of these years as well, but had also exited in the first round, never really having a chance to prove anything. The fate of the team was also up in the air that offseason, when they were put up for sale. Eventually, a billionaire from Texas named Red McCombs bought the team, and opted to keep them in Minnesota. In the NFL draft, the Vikings selected Randy Moss, a wide receiver from Marshall, whom most teams had stayed away from due to his attitude. They also decided to go with their quarterback of the previous season, Brad Johnson to start the season. Little did they know that their greatest season ever was about to unfold.

Dennis Green said that he felt this was his team's year to win the Super Bowl. He really like their chances, and thought they could do very well. Little did he know how right he was. The Vikings opened their season by playing the Tampa Bay Buccaneers. Randy Moss caught his first NFL pass, an 11 yard rocket from Brad Johnson, on the third play of the game. His second NFL catch was a 48 yard touchdown, an underthrown pass which Moss bumped like a volleyball to keep it away from the cornerback. The Vikings rolled in their first game that year, 31-7. But in week 2, Brad Johnson was injured against the Rams. This was when Randall Cunningham, whom had come out of retirement to join the Vikings that offseason, stepped into the role, winning the game for his team. It was pretty much game, set and match for the Vikings from there. They would go on to score 556 points, an NFL record, that year with some fantastic games along the way. Randy Moss had his coming out party against the Green Bay Packers on Monday Night Football that year, torching the cheeseheads for over 100 yards and a couple touchdowns. One of the most memorable victories I remember from that season was the game on Thanksgiving against the Dallas Cowboys. Randy Moss only caught three passes, but they were three 50 yard touchdown catches, and the Vikings won 46-36.
After rolling through most of the season, the Vikings finished 15-1, becoming only the third team (Pittsburgh became the fourth in 2004) to win 15 games in a season. They had clinched home field advantage throughout the playoffs, as well as a first round bye, so they were in great position to win the Super Bowl, right? Well, sort of. The Vikings played the Arizona Cardinals in the second round of the playoffs and defeated them 41-21. Thus set the stage for the NFC Championship game between the Vikings and the 14-2 Atlanta Falcons. It was going well, with the Vikings leading 20-7 just in front of halftime, but the Vikings turned the ball over, and it soon became 20-14. In the second half, the Vikings built a 27-20 lead. Gary Anderson came on to attempt a 38 yard field goal. This was a field goal that would make it a 10 point game with just over two minutes to play, making it essentially impossible for Atlanta to come back. The Vikings were finally going back to the Super Bowl after all these years. Everyone felt this way because Gary had not missed a field goal all season. So what happened? 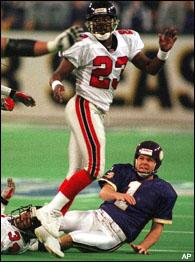 He missed. For the first time all season, Gary Anderson had missed a field goal. Atlanta went down the field and tied it, and when the Vikings had a chance, with the NFL's most potent offense to take a deep shot for chance at a victory, they took a knee instead. The game went to overtime, and the Falcons stopped the Vikings, then took the ball down the field and kicked the game winning field goal. Atlanta pulled the upset of the century, 30-27. That game still brings painful memories whenever I am reminded of it.

And for most of the past decade, the Vikings have been a mediocre team, never again reaching the level of play they achieved in '98. They've been through two coaching changes, and a load of players. I've continued to support them through it all, including some hard to watch football games. This season, the Vikings are (at the date of this article's writing) 7-6, on a four game winning streak. Whether they can continue this success is unknown, but I believe this season is a turning point for the Vikings' recent misfortunes. Will they reach 15 wins again? Someday, perhaps. But I'd be happy just to see the team return to relevance. Hopefully they'll have won their next game by the time you all read this, depending on when that is. I hope you've enjoyed my little trip down NFL memory lane. Even if you are a Packer fan, and thus hate the Vikes. I'm out. 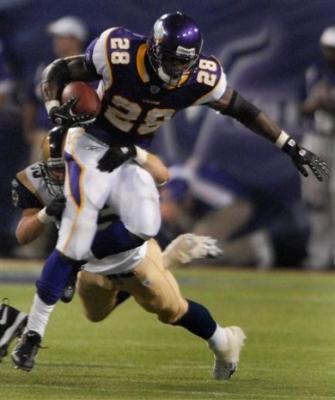 10
Quote O' Matic
Genie: "Better watch out for that wind sheer. -Genie"
DuckTales: The Movie- Treasure of the Lost Lamp