Best Of The Best
By Friday_The_13th
On
Ranging from fifth favorite to first favorite I am going to write about my favorite wrestlers of all time. I do this now because sadly I believe wrestling in present times is poor at best. We have WWE doing whatever lackluster stories they want and can get by with because theyre number one. And we have TNA trying their best to grow and expand, but with a limited reserve of talent on their roster. Two of which make their money impersonating former WWE talent. So I am weighing in on who my top five wrestlers of all time are. 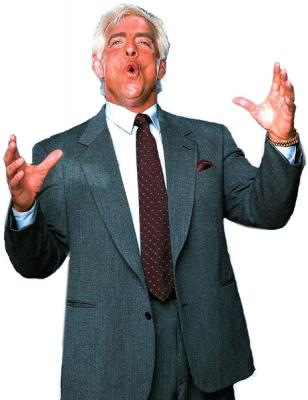 At number five, I give much admiration and respect to The Nature Boy Ric Flair.
The essential thinking mans wrestler the man faced opponents twice his size and he defeated them, at least in plot; with his wit and underhanded tactics. He knew how to play the referees, the crowd, and his opponents. He also knew that in order to level the playing field he would need a finisher that was frightening to opponents even if he was not, the Figure Four Leg Lock. I love watching David Vs Goliath matches. I also enjoy watching brains versus brawns matches, and most times Ric Flairs matches never disappointed me. The way he would struggle his way to survival just long enough to get his finishing move off was very entertaining. He had many Rivals and he helped push those rivalries into the spotlight. Rivalries with such icons as Dusty Rhodes, Ricky Steamboat, Terry Funk and Sting. Most of the fights he had with these men ended bloody. Later down the road in his career he would find himself contending with Hulk Hogan over who the best wrestler of all time was. The two would cross paths numerous times in the following years, including in situations where the Four Horseman faced off against the New World Order. My guess is that Ric is set to retire this year at Wrestlemania and honestly it is long past time for it. But I will miss Ric Flair. He is one of the wrestling gods on high. 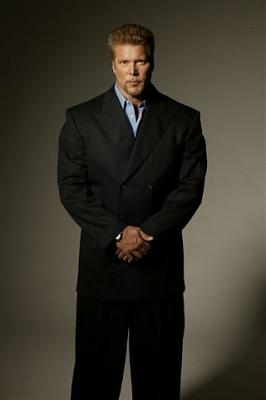 At number four, I give a howl to the man known as big sexy, the diesel Kevin Nash. This was a man who knew how to impress upon the audience his large stature. He didnt have to know a lot of moves, he just had to appear devastating and he accomplished that. With his jackknife power bomb, his sidewalk slam, his foot chokes and knee lifts and elbows, he convinced me that his strikes sapped the life out of opponents. One of my favorite matches was watching Kevin Nash end Bill Goldbergs winning streak at Starrcade 1998. Even though there were interruptions in the match, Nash convincingly matched Goldbergs power. But my favorite feud of Nashs was when he faced off against The Giant Paul Wight to see who the baddest big man was. The Giant ended up in a neck brace after suffering from a Jack knife power bomb. At present and despite 17 knee surgeries, Kevin Nash is battling it out in the six sided ring of TNA. As well as his appearance in the ring, Kevin Nash has always had a unique sense of humor which I enjoyed very much. I was saddened to learn that Vince McMahon intentionally silenced Nashs humor during his NWO debut in the WWF in 2002. 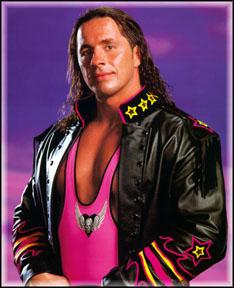 At number three I give you the excellence of execution Brett Hart. In many ways he was the torch carrier after Hogans departure from the WWF in the early 90s. Brett Hart like Flair was not a power wrestler, although he could display some power. Brett was a tactician. He was a thinking wrestlers thinker. He knew every move in the book and the reversal for every move in the book. He was also sported an amazing endurance to pain which helped him to last in the ring against some devastating foes. I fondly remember Brett Harts match against Mr. Perfect for the Intercontinental Title at Summer Slam 1991. It was a long and thrilling match. It displayed both Bret Harts and Curt Hennigs amazing in ring ability that would etch both of them in stone among the upper echelon of wrestlings greatest athletes. In the end Bret Hart won the Intercontinental Title in front of his mother and father. Little did I know that it was only the spark to a fire. Brett has since accomplished great things in his wrestling career. Memorable matches include his making Stone Cold pass out from pain at Wrestlemania, and his defeating of Bill Goldberg at Starrcade 1999. But that match against Bill Goldberg would send Bret Hart into eventual retirement from a reckless mule kick to the neck. Hart has also suffered heartbreak and disappointment. In 1997 his curtain call in the WWF against Shawn Michaels was mottled by a screw job from Vince McMahon. In 1998 Bret Harts brother Owen died from a harness malfunction as he attempted to drop from the rafters on a bungee cord much in the way Sting used to, but dropped to the ring snapping his neck on a turnbuckle. Bret Hart's brother in law Davey Boy Smith passed away years later, and his long time friend Chris Benoit would snap and allegedly kill his family before committing suicide. 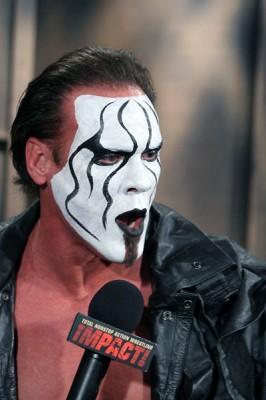 At number two I give the enigmatic Sting. Sting is one wrestler who has built a legend for himself while at the same time refusing to wrestle for Vince McMahon. Sting was always the wild man of the wrestling ring, sporting a style that was rapid fire and capable of fending off mobs. Sting has fought against many rivals like Ric Flair, Big Van Vader, Sid Vicious and Hollywood Hogan. Sting began his career wresting with The Dingo Warrior, later the Ultimate Warrior in a tag team named The Blade Runners. In singles competition sting sported a short blonde flat top, colorful face paint and matching ring gear. Sting began in the NWA, later WCW by being a banner carrier for the underdog federation at a time when Hulkamania was at its apex in the WWF. Later when Ted Turner would bring in the Hulkster to WCW, Sting welcomed him instead of letting his ego get in the way. Eventually one of the greatest and longest running feuds between Sting and the evil Hollywood Hogan would lead to the greatest Starrcade ever, Starrcade 1997. During this period Sting stopped dressing is colorful duds and borrowed the look from Brandon Lees The Crow. A look which he sports to this day. Much like in the beginning of his career, Sting is helping to push an underdog company TNA before he retires. 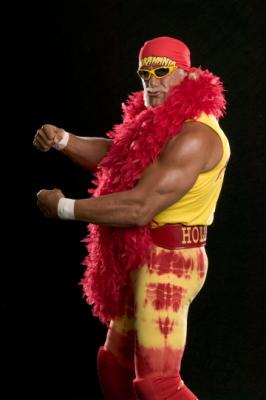 Coming in at number one is the Immortal One Hollywood Hulk Hogan. This is where you will think me unoriginal. But what can I say? I have followed the man ever since he and Andre set the way for Wrestlemania III. Hogan never had a large repertoire of wrestling moves. Few times I have seen him break out some impressive submission moves undoubtedly learned from Antoni Inoki. But Hogan never had any troubles communicating his energy and perseverance in the ring. He could sell a match whether winning or losing. His wide open eyes and wagging finger ensured Hulkamaniacs abroad that no matter how scary the enemy, he would not take any duff from him. He was an electric figure for the side of good. He was the Giant Slayer. The battler of monsters. In an age when wrestling was still mainly geared for the youth of America, Hogan was the superhero in red and yellow. He convinced young boys that it never paid to be evil and that you should never back down from your fears, but always face them. No body sold good guy like Hulk Hogan, at least not in wrestling. Because as fierce as his opponents would be, they never had his wild eyes when he would mount a comeback. Then one year in my late teens, it happened. The Leg Drop heard round the world. Hulk Hogan arrived at WCW Bash At The Beach 1996 seemingly to come to the rescue of his friends Lex Luger, Sting and Randy Savage. He was supposed to fight off the outsiders Scott Hall and Kevin Nash. Instead he turned his red and yellow for black with lightning trim. Hulk Hogan, wrestling's most monumental hero, had turned villain. He was a bad guy. Who could believe it? Not me at first, but in the months to follow I went from being a Hulkamaniac to an NWOite. And when the NWO Wolf Pack branched off from the NWO Hollywood, I stayed with Hollywood. Because even when bad, he was cool. He was still Hogan. And he proved he could play the villain very well. In following years WCW would be sold off by Ted Turner as per an agreement with mergered Time Warner, and Vince would be the buyer. A fans nightmare comes true. WCW was belittled in WWF storylines and eventually it faded away altogether. But when Hogan returned to WWF then later WWE, fans still launched to their feet and cheered for the fifty year old super legend. To this very day if Hulk Hogan enters a ring, fans will stand to their feet. He is an amazing person. And I will always be a fan.
Now in my early thirties, obviously wrestling only has all the impact of another TV show. But I hang on. I watch on. And even though I have stopped recording WWE on my DVR a thread of my fanfare hangs on to watch TNA Impact. My fanfare for wrestling has one foot in the grave because of its piss poor product these days. But still, I hang on and hope.
14
Login To Vote!
More Articles From Friday_The_13th 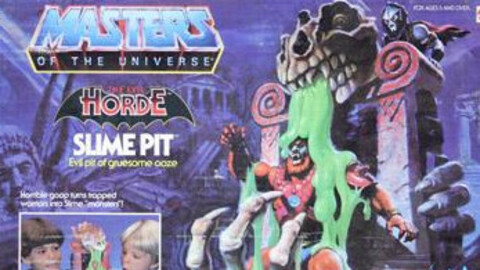 49
Quote O' Matic
Elizabeth James: "[having drink with Meredith] Here's to... here's to you. May your life be far less complicated than mine."
Added By: System
The Parent Trap
Related Articles

13
rockynicekid
Can You Take The Heat?
The Top 5 Most Memorable SummerSlam Moments
4
warriorman
Greatest Stables Ever WWE/WCW
Top 5 greatest stables ever

12
zinny50
25 Faces of Wrestling [Part 2]
I give my opinion's on the past, present and future faces of wrestling.
More Articles
An unhandled error has occurred. Reload Dismiss