From the 80s and 90s
By mikemonmouth
On
Well, well my faithful list followers...this is not truly a list article. Its just an article thinking back on how awesome it used to be to collect trading cards. I loved baseball, football, and hockey and had all those trading cards as well. But how great were some of the other cards we all collected? Lets take a look back at some of the trading cards i remember loving. Oh also, these aren't ranked i guess that's why its not a list article. 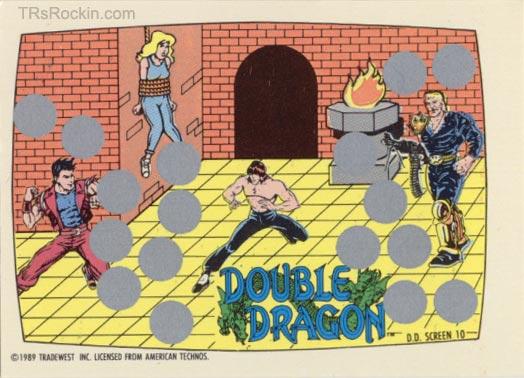 NES cards: Mario 2, Double Dragon, Metroid...what else could you ask for? There were areas to scratch off on some cards like the one pictured, but there were also sticker cards and some that were parts of a puzzle. Was anyone else just obsessed with Nintendo and everything Nintendo? The Wizard with Fred Savage and these cards took Nintendo to dizzying heights for me. 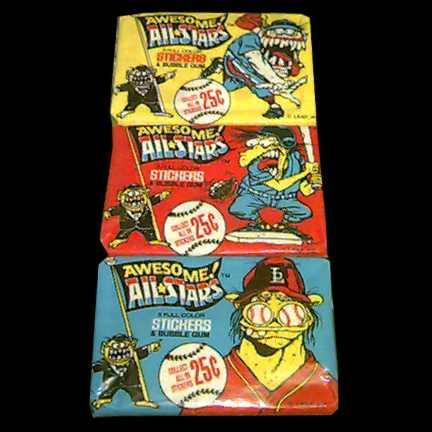 Monster cards: No one really remembers these, I've asked everyone i know. I literally played games in the theater of my mind with these guys. They had some awesome bios like a take on Jason from Friday the 13th and a guy who looked like a rhino, sort of like Rocksteady, along with countless other freak baseball players. When i say freak baseball players i mean these Monster card characters, not Barry Bonds or Jose Canseco. Ok so these are based on a sport but they weren't true sports cards, they were awesome Monster sports cards.

Laffs cards: TGIF. Yeah, you could have Carl Winslow from Family Matters hanging out with Uncle Joey from Full House. You might say who would want to do that? Well, i thought it was funny. CUT IT OUT...yeah i just did that thing with my hand like Uncle Joey did. Some of the best theme songs came from these shows too. Family Matters, Full House, Perfect Strangers, Step by Step, all had very catchy theme songs. I finally let Urkel get some from Laura...yeah i did. 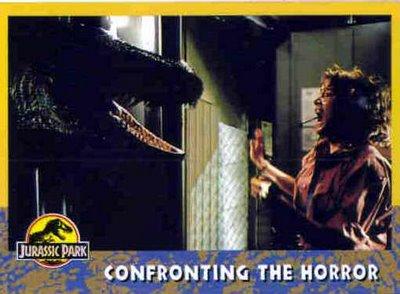 Jurassic Park cards: Every time i see the movie i feel like i'm on a theme park ride at Universal. The song is like the Star Wars song with taking you to that place. These cards were like a theme song in my head taking me back to the island where the Triceratops was laid out and where Newman's face got spit in. Why was that professor so mean to the kid in the beginning by the way? I remember being like, whats up with that? What the hell did that kid do to you, wasn't he just being a kid and being funny? Calm down, sir! 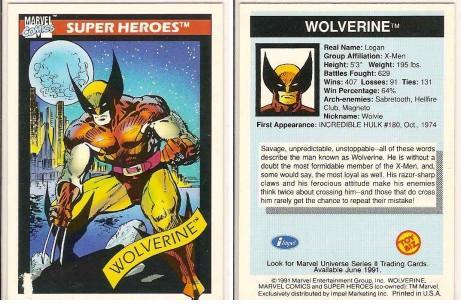 Marvel cards: OOOOOH, how many days i spent staring at these cards. There were also X-Men cards later on, which were really cool too, but these Marvel cards had all of the Marvel U to their disposal. You could literally make the best team of heroes to fight your buddies. I remember having my version of the fantastic four with Wolvine, Ironman, Spiderman and Ghost Rider (with Cyclops as an alternate). Try to top that, pals. I guess you could put up a super villain team and call them the un-fantastic four. Say, Magneto, Doctor Doom, Green Goblin and Mandarin. 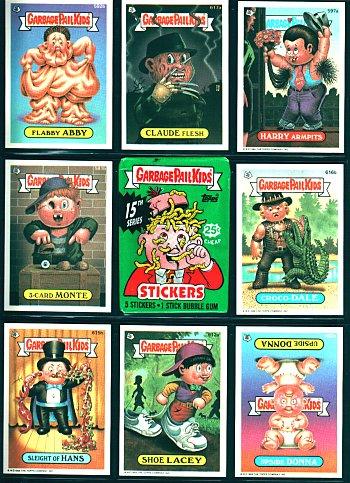 Garbage Paid Kids cards: You knew this was coming when you saw the title. Everyone loved these. Everyone. I actually have the dvd, even though it is not a great flick. I can watch it though and laugh at how bad it is. The Garbage Pail Kids get sent to "ugly jail". Weird and Santa was there? The main kid got picked on by a guy like 20 years older than him but for some reason you don't even feel bad because the kid was a real dork. Anyway, These are probably the best non-sports trading cards ever but its debatable. Some people might say the NES cards...like me. But either way, both were so enjoyable to have and to hold like a wife but without a ring...instead its a card. 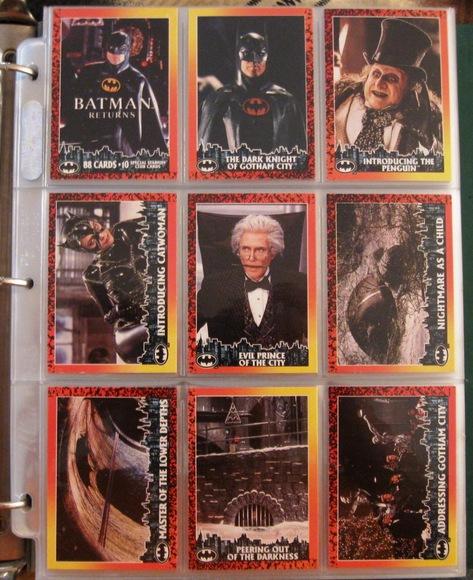 Batman cards: Jack as the Joker, Michael Keaton as Batman, and cards that rocked! I still have 2 unopened packs, don't ask me how that happened but i want to open them so bad. Remember this era, the Michael Keaton kicks ass era? Michael Keaton was Batman, Beetlejuice, Mr. Mom, a guy from the movie Dream Team and then later in Multiplicity he said he liked pizza and folded some up and put it in his wallet...Ok so he also did Jack Frost (not the cool horror flick, the corny family one). However, Jack Frost cards woulda been sweet. 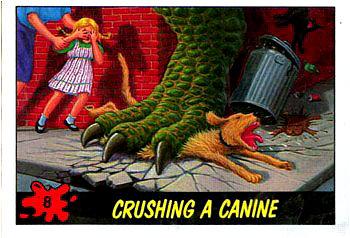 Attack! cards: Most people don't really remember these, but they were sweet as well. They depicted many different weird and horrible things. Many were dinosaurs eating humans or deforming them. Some were like, nuclear, end of the world scenarios. Some were aliens or odd things. But most and works out they were the coolest were the ones with dinosaurs. At least the ones i remember were dinosaurs eating at humans and their pets. 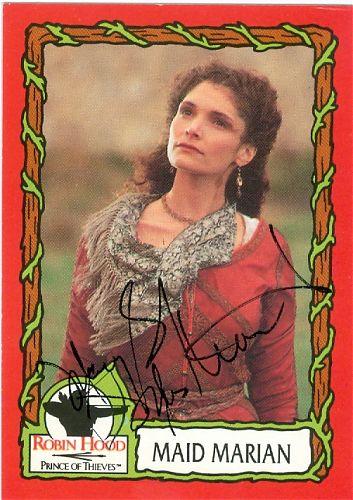 Robind Hood cards: The remake is coming soon with Russel Crowe but it will never be as good as the Kevin Costner/Morgan Freeman one. I literally was obsessed with this flick. I had the horrible toys and the awesome cards and played with them all the time. What was up with that weird looking villain, my man had a sweet mullet though. I thought this movie was way better than the Men in Tights comedic version, which some people loved...just wasn't for me, i guess. Although a young Dave Chapelle was in it. 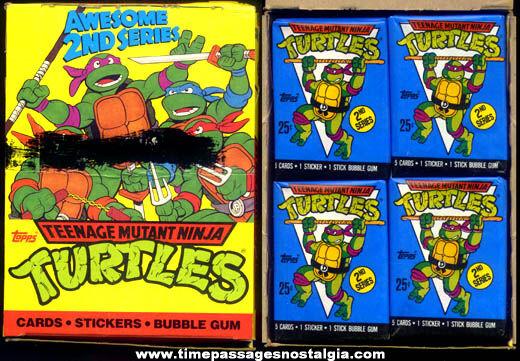 Teenage Mutant Ninja Turtles cards: Dude, these cards were tubular. They were radical. Ok, that's enough but these cards had all the cool characters on them. Obviously all 4 Turtles but also many supporting characters like, Casey Jones, Yusagi Yojimbo, Splinter, April, Vernon, Shredder, Baxter Stockman, Rocksteady, Bebop, Ratking, Krang, Leatherhead, and many many more. TMNT ruled back in the day from the cartoon to the movies to toys to turtle pies to ooze to trading cards. 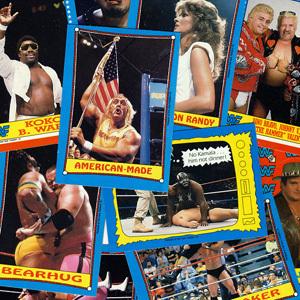 WWF cards: When i would go to the laundromat with my mom, i remember i couldn't bring my LJN figures, so i brought the next best thing, all my WWF trading cards. I would wrestle them, like doing all the moves and literally wrinkle and tear them all apart. I still have many that are barely holding on. My Dynamite Kid card is almost dust now, i played with it so much. They had different series, the old ones had some cool in-ring moments from Wrestlemania 3 and other events, the later series didn't but had numerous cards for each popular wrestler at the time. Hogan, Warrior, Piper, Dynamite, Savage, Muraco, Steamboat, Hitman, Tito, Ventura, DiBiase, Perfect, Rude, Andre were just a few names you could collect or fight.
52
Login To Vote!
More Articles From mikemonmouth