I'm back with some more memories of my "Golden Kid Years".
By Roadgeek
On
In my last article, I talked about Christmas 1994, Summer 1995, and other things about 1994-1995 life as a 4-5 year old. I have even more to talk about in this article, so hold on tight. Time circuits on, flux capacitor fluxing, engine running, let’s go! I hope you know what movie that was from. :-)

When I was growing up in this era, I was pretty much free because I hadn’t started Kindergarten yet and I never went to a preschool. Basically, I was either at home or around town everyday. I miss those days. At 10:00 AM, I would either watch Bozo the Clown or Sesame Street. After that, I’d sometimes watch The Price is Right. But usually, it’d be Mister Rogers’ Neighborhood.

Hold it!!! You’re probably wondering what the showcases, Contestant’s Row, and Plinko have to do with my 1994-1995 life. Well in late 1994, The New Price is Right premiered and for some reason, I loved that show. I don’t know why I loved it so much. I remember wondering if they were going to spin the big wheel or if they were going to do one of those nifty “The Price WAS Right”. 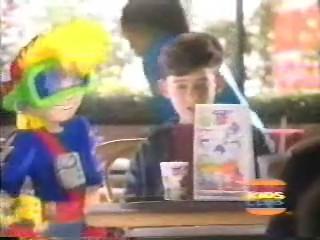 My 5th birthday on November 27, 1994 was a very interesting birthday. I lit the Advent candle for the first time and my dad and grandmother had a flat tire on the Interstate coming home in the pouring rain. Once we were home, everything was perfect. I got a blue Little Tykes Station Wagon for my birthday. I wish I had some good pictures of it. That same Sunday, there was an 8 hour Rugrats marathon on Nickelodeon. I video taped the whole thing. I probably only watched it about 2 times. In March of 2005, over 10 years after I had recorded that marathon, I rediscovered the video hidden away in the living room. On that tape were many treasures including old Rugrats episodes and very cool old commercials that some are now on Retro Junk. I’m actually watching it right now as I type. That commercial snapshot is taken from that tape. 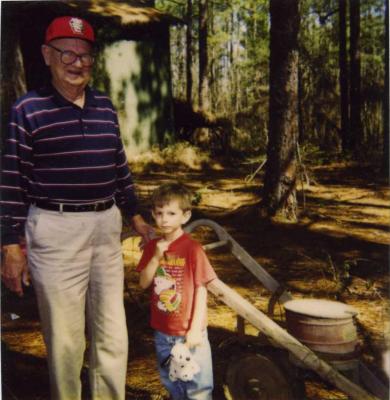 Sometime in late 1994 or 1995, I took several trips with my grandmother and her friend in her friend’s RV. The above picture is of me and my grandmother’s friend in Lakeview, North Carolina on March 21, 1995. Southeastern North Carolina is where my ancestors from Scotland settled. We took many a few other trips including a trip where we spent the night in Richmond, Virginia. 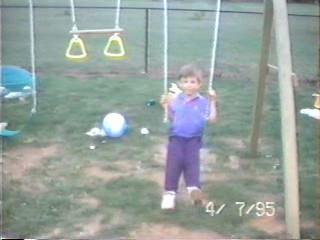 Sometime in 1994, my parents bought me a new swing-set. I loved that thing. I would swing on it constantly and slide on it constantly. In April and May of 1995, home videos were recorded of me swinging on it as you can see above. Also in that video, I sang Puff (The Magic Dragon) by Peter, Paul & Mary. 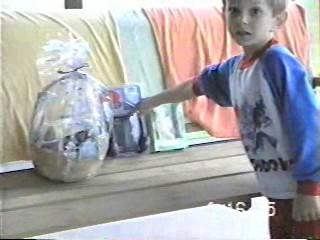 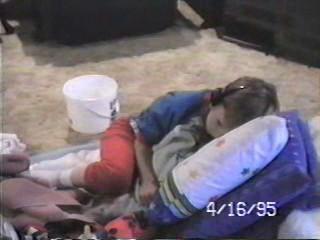 Easter of 1995 was very special as well. When I went to see the Easter Bunny at Carolina Circle Mall that year, I told him to put all my stuff on the back porch. I think it was because I was afraid of him coming in the house. Anyway, on Easter morning, I went on the back porch and found all my presents. I think I got a Sesame Street Camper, a portable audio cassette player, and a chocolate Easter Bunny. The first picture above shows me pointing out the cassette player. Also that Easter, I had a stomach bug. Don’t worry; I’m not going to be graphic. The second picture above shows me resting in the living room while listening to the portable cassette tape player. I didn’t get rid of that bug until later that week. 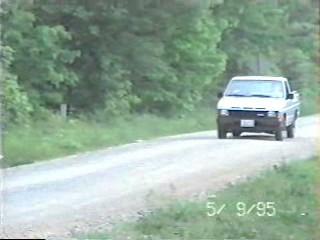 My dad had a pickup truck that I loved when I was little. It was a blue 1986 Nissan Pickup Truck. Whenever we wouldn’t ride in it, I’d get really mad. But starting in 1994, we bought a 1994 Honda Accord, so it was cool. Anyway, the above picture shows the truck rolling up our road. My dad and I would ride it down our road occasionally.

Let’s fast-forward 11 or 12 years into the future. The year is now 2006. Instead of being a 4 and 5 year old, I am now 16 years old. Carolina Circle Mall closed in 2002 and was demolished last year. A new Wal-Mart Super-Center is going to open in 2 months at the old Carolina Circle. I now must go shopping at Four Seasons Mall which is way too trendy and modern. The weird thing is that Four Seasons is a year older than Carolina Circle. I’m still living in the same house, but it’s changed. The television shows I grew to love have vanished since the mid ‘90s as well as the commercials. We still have the old 1986 Nissan truck, but we now use our new Dodge Ram more. I still listen to Peter, Paul & Mary, but I now understand the words better. I have met many great people since 1994 and 1995 who are now great friends. In 2001, I began going to a private school called Pendle Hill. It was a great school and possibly the Carolina Circle of the ‘00s. It closed a few months ago due to lack of funds.

No matter how many betrayals my life throws me, I can still look back at the great years of 1994 and 1995 via memories, pictures, and video. I also have the great thing known as the Internet where I can relive many of the pop culture pieces of that era especially here on Retro Junk. My life is still great today, but I will always hold my younger years in a special place in my heart. Please remember one thing. Your past is a cherished thing. Hold on to it. Good night.
4
Login To Vote!
More Articles From Roadgeek 21
Roadgeek
Living in the '90s
My great memories of a great decade.
An unhandled error has occurred. Reload Dismiss