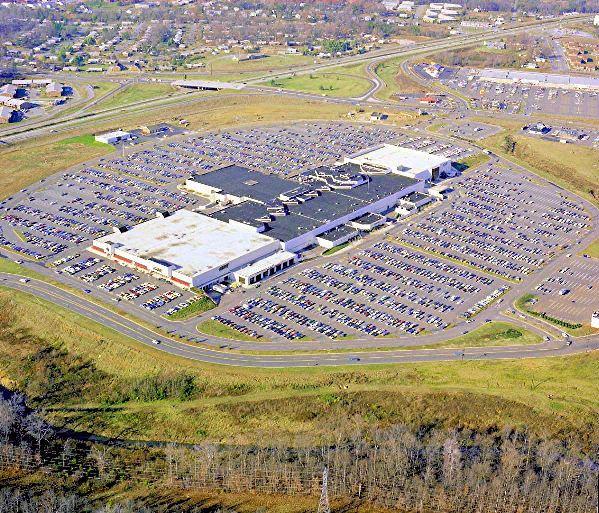 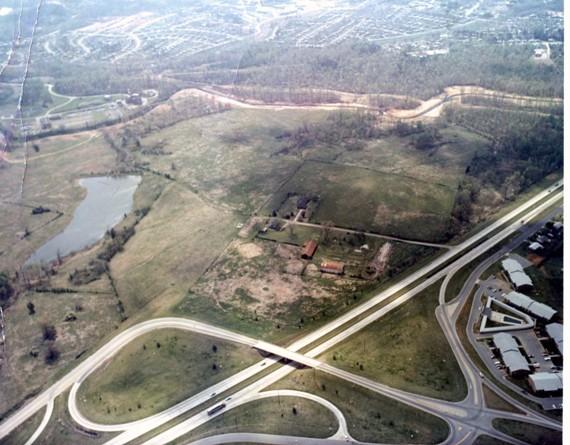 In 1972, Alpert Investment Corporation bought a cattle farm from Dr. Edgar Sikes in Northeast Greensboro, North Carolina, as seen in the above 1971 picture, to build a new mall. Two years later, in April 1974, construction began on this new mall which would soon be known as, "Carolina Circle Mall". 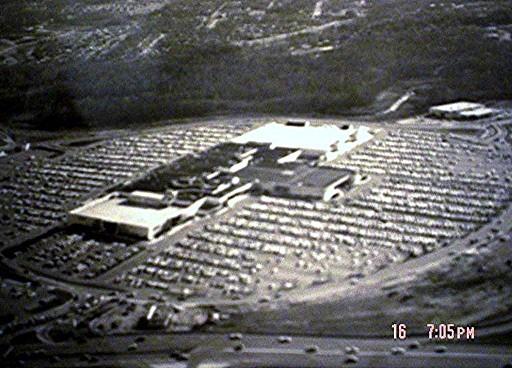 Carolina Circle Mall officially opened on August 4, 1976 with 22 stores including its three anchors, Belk, Ivey's (Became Dillard's in 1990), and Montgomery Ward. The above picture is the mall on opening day. 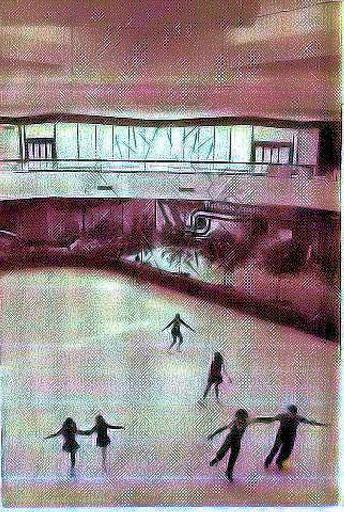 Other than the Alice in Wonderland shows, the Ice Chalet was very popular with mall goers. People would go to the mall early, before any stores were open, and take skating lessons there at the Ice Chalet. For Christmas in either 1977 or 1978, the mall's Santa Claus even rode a sleigh on the Ice Chalet. Skating competitions were even held at the mall's Ice Chalet. 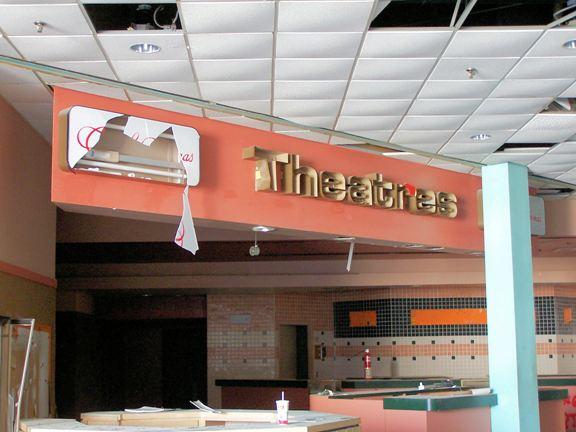 Another popular attraction at the mall during this time was the Circle Six Theatres. Many a date took place at this theater, including frequent midnight showings of The Rocky Horror Picture Show. The reason the mall looks so banged up in that above picture is because that picture was taken in 2005, right before it was demolished. 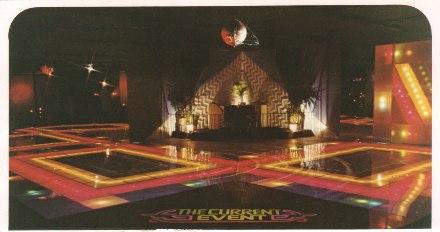 Yes, there was actually a disco at the mall. Called, "The Current Event", this teen disco was a fairly popular attraction at Carolina Circle Mall in the late '70s. The Current Event died the same day disco died, I believe.

In 1986, the mall was purchased by an Australian firm, Sunshine Properties. Sunshine hired Strouse Greenberg in June of 1987 to oversee renovations to get Carolina Circle Mall updated to better compete with the much more popular Four Seasons Mall on the other side of Greensboro. 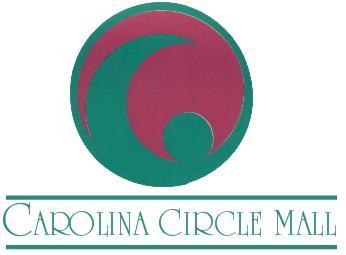 The renovation was completed in June of 1988. The renovation included a new color scheme, brighter lighting, the new emblem seen in the above picture, food court, and a $250,000 custom-built Carousel. Unfortunately, the Carousel and food court required the removal of the Ice Chalet. This move made quiet a few people upset.

Please note that this is the version of Carolina Circle Mall I personally remember. Much of the following information might come from my own memory. 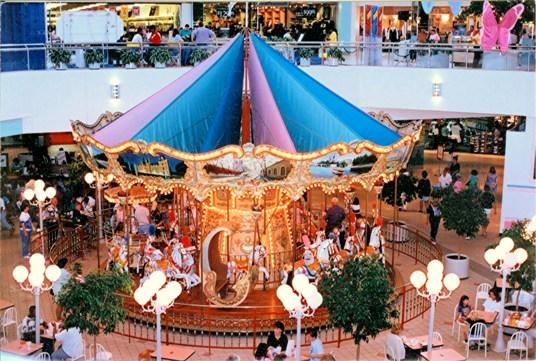 This picture of the Carousel is from sometime in the early 1990s. While the Carousel wasn't as popular as the Ice Chalet that preceded it, the Carousel still became a pretty major feature of Carolina Circle Mall. If you ever rode this Carousel, you always had to ride in the spinning cart. I actually got in trouble by the Carousel operator once for spinning too hard and too fast. At Chick-Fil-A, right by the Carousel, if you bought a kid's meal, you would receive a free Carousel ticket. 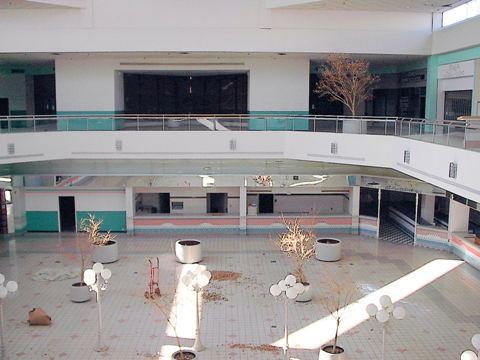 Surrounding the Carousel was the Food Court, aka the Carousel Court. The food court never really featured any chain restaurants, other than Chick-Fil-A and the short lived Taco Bell. Instead, it featured many mom & pop restaurants, such as Gatto Pizza, Circle Cafe & Deli, Monk's Cheesesteaks & Cheeseburgers, and Mr. Wok Chinese Restaurant. And of course, Piccadilly Cafeteria, which was located in another part of the mall.

The mall's demise seems to have started sometime in 1996. This was when many of the stores that had been at Carolina Circle Mall since the very beginning, closed. These included Camelot Music, Waldenbooks, Radio Shack, Piccadilly Cafeteria, and even the Circle Six Theatres! As a matter of fact, the Carousel was even removed sometime in late 1996 or early 1997.

Belk and Dillard's both closed in the late '90s. Montgomery Ward soon became known as the only open store at the mall. Sadly, Montgomery Ward went out of business nationwide in early 2002, closing Carolina Circle Mall... permanently.
The mall was purchased by Wakefield Associates in 2005, who demolished the mall on June 30, 2005. 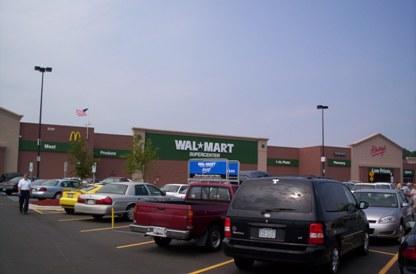 A new Wal-Mart and open-air strip shopping center opened in Carolina Circle Mall's place on August 16, 2006. Known as "The Shoppes at Pyramids Village", this new shopping center features many stores and outparcels such as Dot's Fashions, Chosen Image, That Mattress Place, Pizza Hut, Andy's Cheeseburgers, IHOP, and other places. It is very inferior to the original Carolina Circle Mall, but it does the job fairly well. 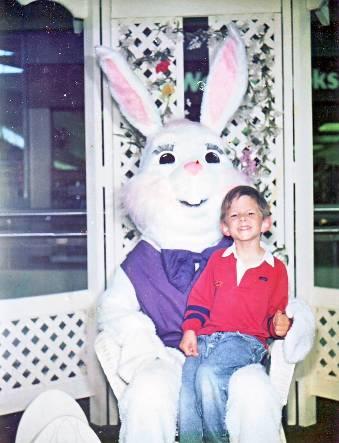 When I was a little kid in the early-mid '90s, Carolina Circle Mall was my favorite place to be. I think I would go there at least three times every week. My favorite attraction at the mall was, of course, the Carousel. I would ride the Carousel almost every time I went to the mall. Just like every other kid who rode it, I had to ride in the spinning cart. You see; it was just a lot more fun spinning around in that cart at fast speeds than slowly going up and down on a horse.

I would frequently visit Camelot Music to stock up on videotapes and audio cassette tapes. I would also go next door to Everything's a Dollar to buy some candy and cheap toys.

But the store that really brought me joy was Montgomery Ward. If you never got to go to a Montgomery Ward store, they were basically a lot like Sears. They had a little bit of everything, including furniture, clothes, electronics, computer and video games, and lawn equipment. In 1995, I vividly remember purchasing a video of Pee-wee's Playhouse from Montgomery Ward's bargain bin upstairs. It was because of Montgomery Ward that I'm now a fan of Pee-wee Herman.

One of the most unique events I remember was the mall's Santa Claus parachuting from a helicopter down to the mall's main entrance on the day after Thanksgiving in 1993. I wasn't at the mall to see it, but I remember watching it on the evening news that evening. A newspaper ad for this event is down towards the bottom.

No one is really completely sure how the mall closed. Some people think it was on the outskirts of town. Some think it was because the new owner's did away with the Ice chalet in the late '80s. Some even blame a waste management plant down the road from the mall for closing it, due to its constant smell. As for me, I do not have a reason. I just simply believe it was a great mall that met the fate that many malls nowadays are facing...

If you would like to learn more about Carolina Circle Mall, please visit my website at www.homeofcarolinacirclemall.com

I will now conclude this article with various retro newspaper ads for the mall, straight from the Greensboro News & Record. 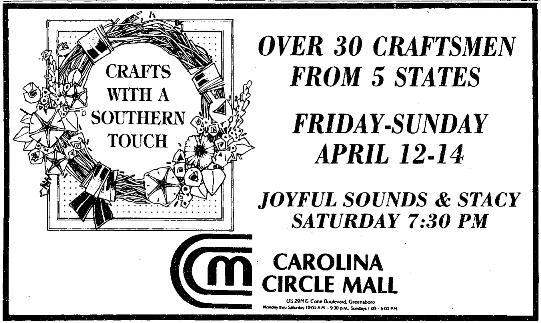 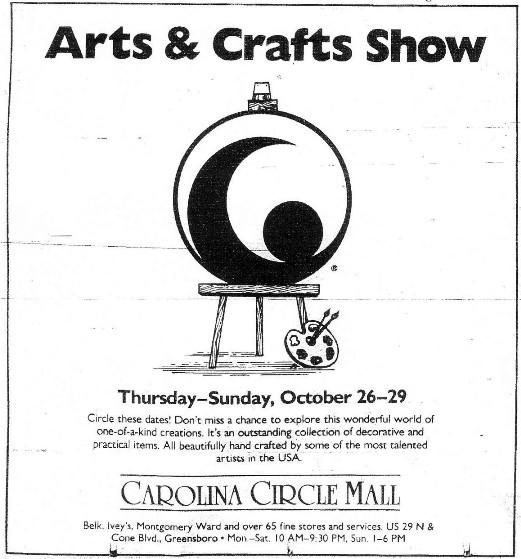 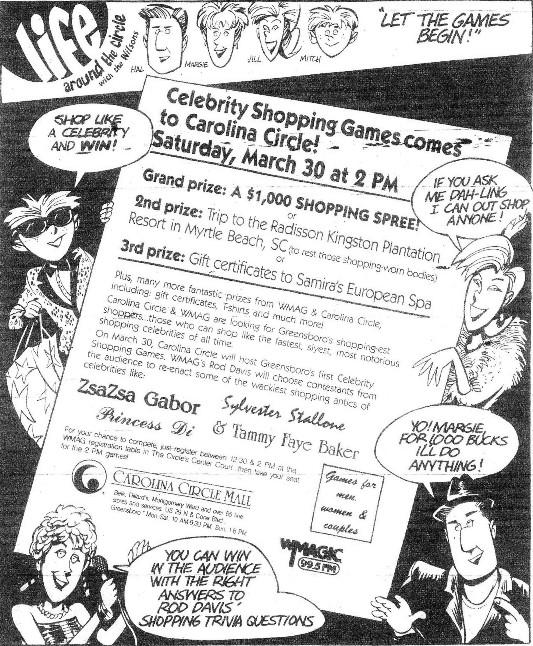 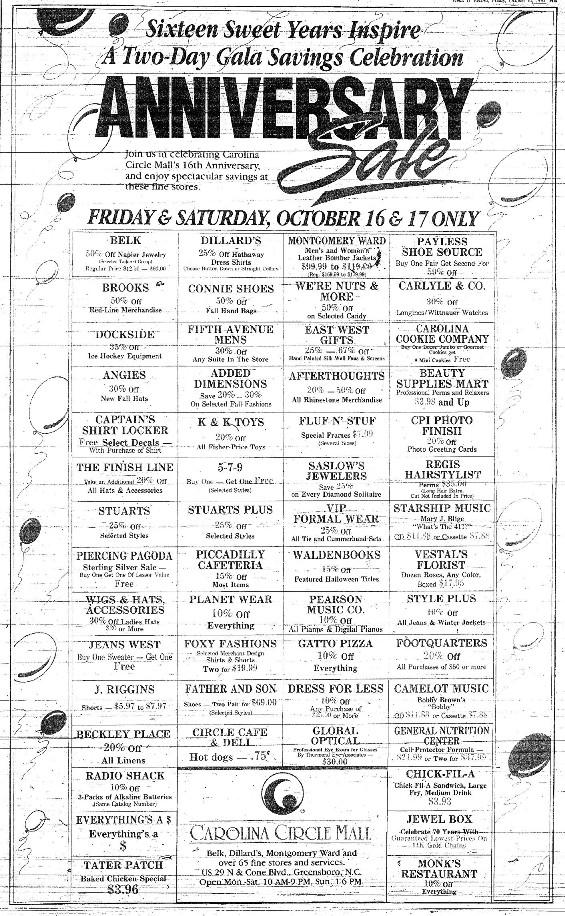 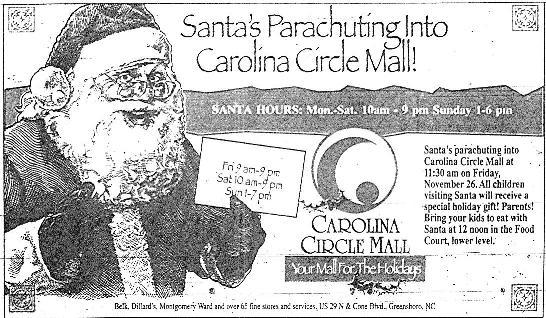 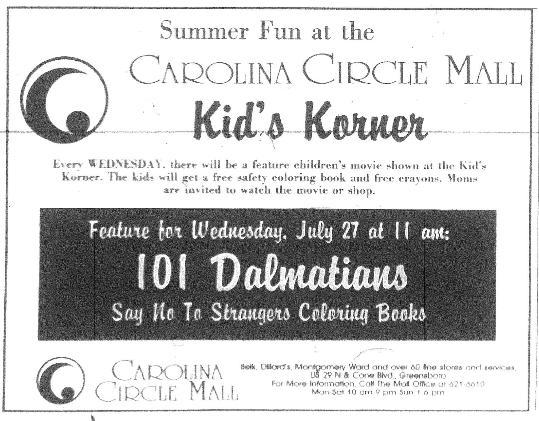 28
Roadgeek
Carolina Circle Mall
Join me as we take a look at one of the greatest pieces of retail nostalgia ever.
An unhandled error has occurred. Reload Dismiss