He may look like a radioactive booger, but you still had nightmares about him as a kid. Admit it.
By Mystie
On 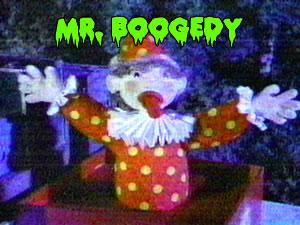 Mr. Boogedy originally aired in 1986 as one of the great made for TV movies on The Wonderful World of Disney. It was popular enough to spawn a sequel, The Bride of Boogedy, as well as several bootleg DVD copies on eBay. 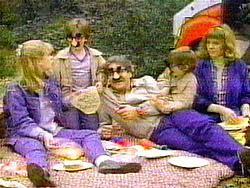 The story begins as a family of five is on their way to a new home in New England. They're excited not only for their first house, but because they're going to have the only Gag City franchise in the area. Like, totally Gag me with a City! They make a pit stop to eat sandwiches, wear funny masks, and throw plastic vomit at each other. Bit of trivia - the older boy in the family, Corwin, is played by David Faustino also known as Bud Bundy from Married with Children.

They arrive at the house purchased from "Devil May Care Reality." In the town of Lucifer Falls, there is no ReMax. It's a stormy, dark night and makes the house look incredibly haunted. But if you buy a house in a place called Lucifer Falls you can pretty much expect it to have some creepy history. The family proceeds into the house and attempts to find a light. A shadowy caped figure creeps over them, then introduces himself as Neil Witherspoon. He's actually Gomez Addams with overgrown facial hair. He tells them their house has a tragic history, and to watch out.... for the Boogedy Man!

The family goes on an exploration of the house. The boys go downstairs to look for ghosts, but when their dad switches the light on, they see there's nothing down there. But, Aurie's fuzzy teddy bear is missing from the chair he left him on! After they leave the tiny rocking chair begins to rock back and forth on its own.

That night the door at the end of the hallway is glowing green. Jennifer, the teenage daughter, slides up to the door and opens it, then is blown away by a strange wind. When she awakes she's on her back in the hall, screaming that she saw the Boogedy man and his face was all yucky like a grossy sandwich or something. Wait a minute.... man with a face like a sandwich... could the culprit be.... 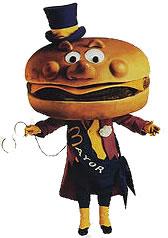 Oh Mayor McCheese, surely you couldn't have turned to a life of crime. Who ever heard of a crooked politician?
The family looks in the room and finds slimy green footprints stuck on the wall. Father peels one off and is greatly amused as he sticks them on his body yelling, "The Boogedy man walked all over me!" In those days Disney still had some dignity. If this movie was produced in this age, green footprints would be whored at ever Disney Store for $5 a pop.

Later on the boys are playing around in the kitchen and the toaster shake rattles and rolls like it's been filled with evil pink slime. The kitchen gets possessed - cabinets slamming, tea kettle whistling, water running on its own. 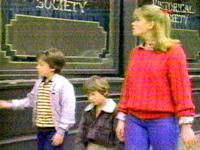 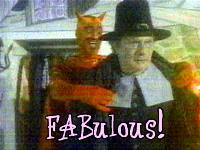 The kids take things into their own hands and head over to the historical society to find out about their house. Mr. Witherspoon is working there and he tells them the tale using an old timey pop-up book. It begins back when pilgrims lived in Lucifer Falls. They all were good people except William Hanover, who scared all the children. He was in love with the widow Marion, but Marion rejected him. So he sold his soul for a magic cloak, stole Marion's son, Jonathan, and blew up the house. Ghost Marion can't get in and Ghost Jonathan can't get out. 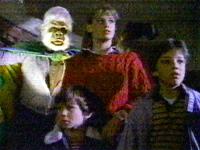 The trio arrives home and looks for their mom and dad. While the lights are out, their father tries to scare them with a cheap gorilla mask. He shows them all the new toys he purchased for their Gag City store. Dad is laughing as he shoot balls as his children, and the ghosts are equally amused. When father claims ghosts do not exist, that's when they begin to run amuck.

They decide to stay in the house, but camp out in the living room for the night. I don't see how camping out in the living room is going to save them from ghost attacks, but hey, this is a Disney movie, after all. The mother wakes up in the middle of the night and goes into the kitchen to eat 64 slices of American cheese. Next widow Marion is rapping at her window, and is invited in for coffee. Marion tells the mother that she can't come in as long as Mr Boogedy is in the house and she hasn't seen her son in 300 years.

The family is so concerned, they decide to get rid of Boogedy's cloak. They climb up the stairs with sophisticated ghost-busting equipment like flyswatters and brooms. The two boys split from the team and head to the basement. The rest of the team ventures forward, but find nothing upstairs. 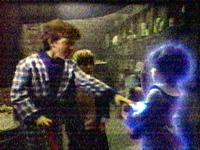 The basement lights aren't working. Aurie is heard screaming, "STOP! STOP!" as he wrestles with the teddy bear thief. The thief is Jonathan, and only borrowed the teddy bear because he's so lonesome. There's not much more time for small talk, the sounds of Mr. Boogedy's deep Vader-like breathing is drawing closer.

The family convenes in the living room, just in time for Boogedy to show himself during a barrage of fireplace explosions and lights flickering. 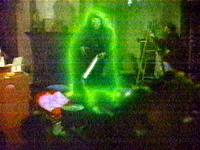 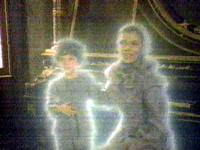 They hide themselves behind the boxes of Gag City inventory. Boogedy uses electric finger shots to shock them. Corwin tries to attack Boogedy with the vacuum cleaner, but Boogedy uses his magic to turn the tables on Corwin! The vacuum sucks everything nearby, and Aurie bolts behind Mr Boogedy. Mr Boogedy gets stuck in the vacuum cleaner. I always thought those rumors about guys getting stuck in vacuum cleaners were just urban legend. Alas, poor Mr. Boogedy lost his cloak in the cleaner and disappears without his magic.

The vacuum pops up holding the clock. With a toss in the air and a "Boogedy Boogedy boo," the cloak is gone, and the house is no longer haunted. Jonathan and Marion are reunited and their souls can finally rest in peace.
<img class="reviewimg3px" src="/img/art-images/theend.gif">
4
Login To Vote!
More Articles From Mystie

5
Mystie
Get in Shape Girl
Get in Shape Girl is back for another 10 laps around the back yard.
5
Mystie
Bugs Bunny's Thanksgiving Diet
I'd like to give Thanks to this bountiful clip show that the WB has bestowed upon us.