I'd like to give Thanks to this bountiful clip show that the WB has bestowed upon us.
By Mystie
On
[/size]ize 2]

Thanksgiving doesn't have much along the lines of specials aside from the popular Garfield and Peanuts ones. But once upon a time the Looney Toons gang had their own 30 minutes of Thanksgiving fun. It was called Bug's Bunny Thanksgiving Diet. Now who the hell diets on Thanksgiving? Everyone knows that holidays and birthdays are free game, so cram in all the cake and grog while you can!

The special thing about Thanksgiving is you get one day of glucose filled bliss before the big holiday shopping rush. Then you spend the next month deciding what you're expected to buy your retarded Hanson fanatic cousin for Christmas only to pick up some gift coupons to Dunkin Donuts at the last minute. 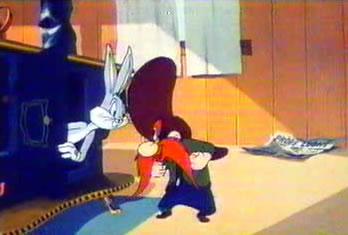 Bugs Bunny thinks that Thanksgiving is for eating carrots. But it seems Yosamite Sam is more interested in eating rabbit. Wow. This is what Warner Bros cooked up for Thanksgiving? A clip show? Shit, we spend our hard earned cash on Marvin the Martian bendy straws and for Thanksgiving we get 5 minutes of original footage in return? For shame, WB. Where's your holiday spirit? 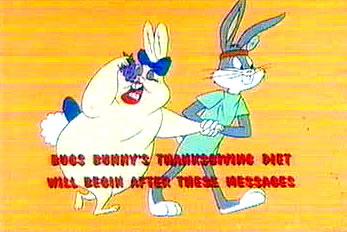 How about a commercial break? Not much along the lines of good toy commercials. But here's one I enjoy. 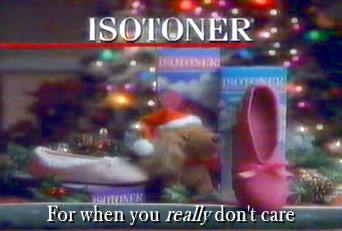 Isotoner slippers. For those people that want to keep just the VERY bottom of their feet warm. 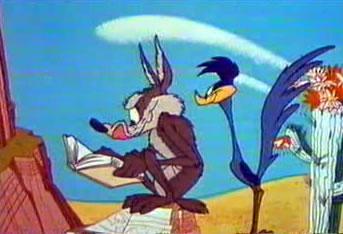 Now we all know what Wile E. Coyote wants for Thanksgiving. One of those anorexic Road Runners. This bird has about as much meat and breast as Paris Hilton. His cookbook shows these pictures of extravagant dishes with plump lush Road Runners. I guess that just goes to show what will happen to your body when you have too much speed. 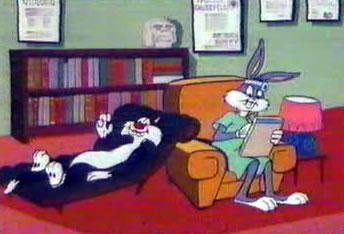 Sylvester has the holiday blues. His father didn't hug him enough as a kitten so now he takes his aggression out on a little yellow canary by the name of Tweety. Oddly enough, the canary has about the same amount of meat as the Road Runner. What they really should eat is a nice juicy wild animal. 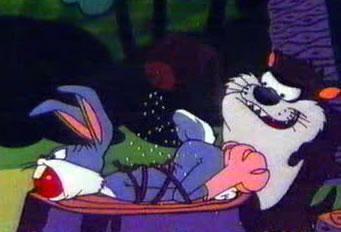 Like a rabbit! Taz has the right idea. Tie that sucker down and fix him up like a turkey. Apple in the mouth, dash of salt for taste. I'm sure Taz would devour him so quickly he doesn't really need to get fancy with the seasonings. But what the hell are those pink things on his legs? I've eaten a lot of turkey in my life, but I've never had one with those fancy little booties that they always depict in cartoons. 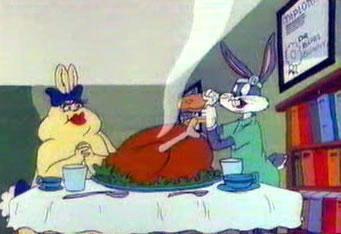 Finally Bugs comes to his senses and realizes that everybody is a fatty on Thanksgiving. So go ahead and enjoy some turkey, it's not THAT bad for you!
5
Login To Vote!
More Articles From Mystie