Frozen treats of yesteryear, which one was your favorite?
By Hoju_Koolander
On 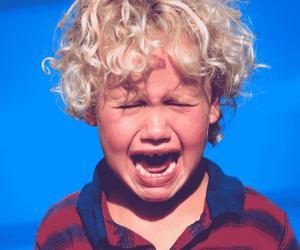 I scream, you scream, we all scream until our parents stuff our pie holes with some form of frosty goodness to keep us quiet. Next to any type of candy we can get our hands on, ice cream and its frozen brethren are one of the most desired foods as a kid. Really as an adult, too, but sugary treats lose their appeal when we know we can have them any time we want and not be told we are going to spoil our dinner. 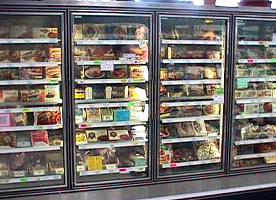 I remember gazing awestruck into the freezers at the local supermarket (Alpha Beta anyone?) imagining what each an every one of the ice cream bars and popsicles would taste like, knowing that it was only a dream and could never be. So I had to settle for what I could talk my Mom into buying, telling her "just this once". Now most of the treats I'm going to talk about today are still around, but there was something different about the packaging and formulas of the 80's and early 90's that made them all the more enjoyable.

One of my favorite store-bought freezer treats was actually made by Disney. Well, I'm sure Disney just licensed the character images out, but it was much more enjoyable to imagine the 7 Dwarves personally crafting each and every one. 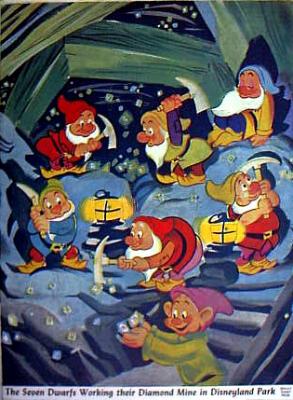 The tasty goodness I'm speaking of was Disney's Character Shaped Popsicles. From what I remember we had orange, cherry and grape flavors (with orange being my favorite) and the character shapes were Goofy, Donald, Mickey and Pluto. The popsicles looked a lot like this Mickey shaped soap below, but more edible. 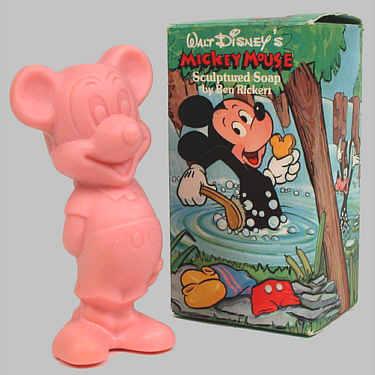 The magic of these popsicles to me was the texture of each different character. It was fun to run my tongue along the ridges of Goofy's hat or Mickey's ears, something about those shapes just made the experience that much more enjoyable. Of course it sounds a little perverted now to say I liked licking the edges of Donald's bill, but these are the memories of a 7 year old we're talking about people-GET OFF MY BACK! 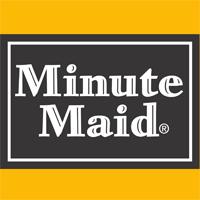 A triangular shaped series of popsicles from Minute Maid was another one of my favorites. I remember the package was like a thick wax paper that was all black except for the white edges which you would use to release the fruit flavored ice pyramid within. These icy delights were what was most often found in our fridge at home, since the idea of real fruit juice gave a greater appearance of being a healthy snack. I couldn't find any pictures, can someone back me up that these things existed? 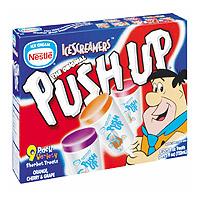 Push-ups were another popular choice for me, not the exercise, but the uniquely frozen sherbet treat. Push-ups consisted of a cardboard tube filled with sherbet that had a plastic plunger you could push up as you ate each successive layer of the soft, frozen, sweet, delicious...(sorry, lost my train of though there.) Essentially the push-up was edible, frozen deodorant, but since kids didn't use deodorant they were usually not offended by the comparison. 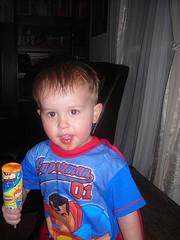 This chubby, tubular cousin of the popsicle was endorsed by a different cartoon studio, Hanna-Barbera. Fred Flintstone usually graced the package and I think when they marketed a purple flavor they put Dino on the box, because you know, he's a purple dinosaur. Push-ups were usually available to purchase individually as well, which was a pretty good bargaining chip for the young manipulator to use. 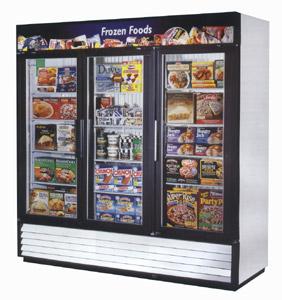 Next to Popsicle town, we had the chocolate covered ice cream bars section and within this frozen glass fortress there was only one champion: The Eskimo Pie!
First of all, the name was mysterious and non-sensical. Nothing about vanilla ice cream on a stick, covered in chocolate says "Pie" to me, but maybe the Eskimos knew different.

What set these particular ice cream bars above the rest was the flakiness of the chocolate covering. The chocolate was so crunchy and delicate, but it didn't just fall away form the ice cream as soon as you took the first bite like so many cheaper brands. It must have been Eskimo mysticism that kept the chocolate in place-Ooooooooooooooo.

When I couldn't convince my Mom to buy anything I had to rely on my friend's Mom's, who were usually much more liberal about stocking their fridge with icy delights! My buddy, Spencer was my hook-up for the multi colored wonder known as Otter Pops. 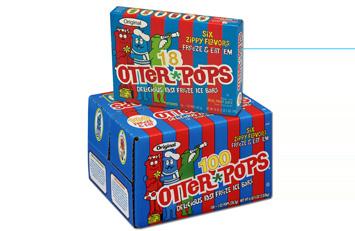 Otter Pops as most of you know are long plastic tubes filled with various colors of juice which are frozen into ice and then chomped on bit by bit. Each color/flavor has a corresponding character which has changed over the years I believe, these include names like Sir Isaac Lime or Little Orphan Orange. The best part was sucking up the extra juice as you chomped on the ice or waiting until the end to enjoy all the excess flavor water in the bottom of the package. 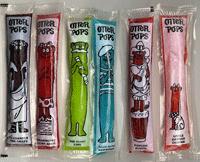 The thing with going over to Spencer's for Otter Pop's was that you were at his mercy as far as the activity that went a long with the consuming of the treat. If it were up to my young mind we would have sat on the back porch discussing which one of our friends had the best NES games while enjoying an Alexander the Grape and Poncho Punch respectively. Unfortunately for me, Spencer's idea of a good Otter Pop Activity was to watch the panic-inducing Disney horror that is "Mr. Boogedy"!

[
If you haven't seen this movie, well I can't help you, because neither have I! Every time I went over to Spencer's though, he would pull this trick on me. Casually he would hand me an Otter Pop and say, "I wonder what we'll watch today" to which my pulse would start speeding up and knew I'd have to eat my Otter Pop as super speed if I wanted to finish it. The set-up went on, "Hmmm, Inspector Gadget? Maybe, The Snorks? Wait, I know...BOOGEDY, BOOGEDY, BOOGEDY!" He always said it 3 times. Spencer would then push play on the VCR and watch my reactions. Covering my eyes, hiding with my face planted in a couch cushion or just walking out to his back yard. Disney should not have made this film, or if they absolutely had to, they should have at least made the villain a little less grotesque. But they made it all right, then they made a sequel! Mr. Boogedy...BAH!

But back to delicious frosty treats. The other source of frosty fun was the man whose name and familiar melody brings joy to children all over the nation. The classy man in a van who is a hero to all kids 12 and under. Of course I'm talking about THE ICE CREAM MAN! 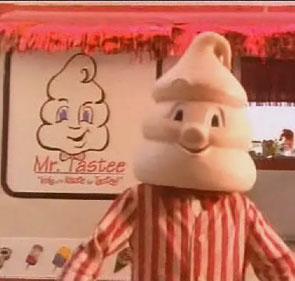 Though I think I'm safe in saying that only Pete and Pete were lucky enough to have the mysterious Mr. Tastee as their official Ice Cream supplier. 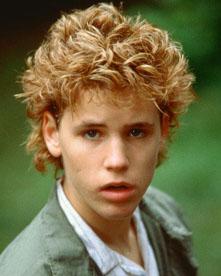 Also a source of cheap toys and low-grade fireworks, the Ice Cream Man's claim to fame is the same as his name, Ice cream is his game and if you think that's lame, well that's a shame, just like the career of Corey Haim. Okay, enough rhyming, let's get back to the story here.

When I was young most ice cream trucks were a class act. They looked like service vehicles, were well maintained and the music which emanated from their loud speakers was a promise that some type of adventure could be purchased with whatever loose change was found in the couch cushions that day. 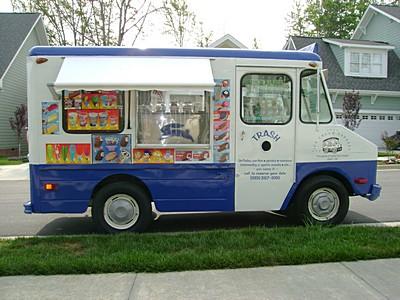 The exclusive offering that the Ice Cream Man brought to my neighborhood was the ice cream head facsimile of any one of my favorite cartoon characters impaled on a stick, their eyes replaced with various colors of gumball. Ninja Turtles, the Pink Panther, even Snoopy, the Red Baron himself. They were all there. To me these treats were works of art, I always felt ripped-off by those WWF ice cream bars that just printed a picture of the wrestler on the side of the bar-LAME!

Nowadays though, I wouldn't dare buy anything from a Mobile Ice Cream Vendor. That's right, the title of Ice Cream Man is reserved for gentlemen worthy of our respect, not these questionable opportunists who think they can just slap some popsicle stickers on the side of an old van with a cooler inside. Ridiculous. This article is going a little longer than I expected, so I'm making the editorial decision to name this article "Part 1" and will continue the rest of the odyssey in "Part 2".
25
Login To Vote!
More Articles From Hoju_Koolander 
We also had a fleet of ICe cream trucks..that

had a living ice cream head logo that promoted the

His name was "Mr.Softee"..I enjoyed the soft serve


The last time that I had a "Mr.Softee"cone was back in


Are you sure you want to delete this comment?
When I lived in NYC back in the 1960's?


We also had a fleet of ICe cream trucks..that

had a living ice cream head logo that promoted the

His name was "Mr.Softee"..I enjoyed the soft serve


The last time that I had a "Mr.Softee"cone was back in

Are you sure you want to delete this comment thread?
Riphard
mmmmmm! "otter pops"!

props for the "mr. boogedy" reference. that fucker was scary for some reason! maybe it was his green aura, i don't know?

Are you sure you want to delete this comment?
mmmmmm! "otter pops"!

props for the "mr. boogedy" reference. that fucker was scary for some reason! maybe it was his green aura, i don't know?

In fact, I can still hear the strains of either "Turkey in the Straw", "The Entertainer" or "Pop Goes the Weasel" when the truck zooms down the Clintonville streets some summer days... and who could ever forget those immortal phrases: "Stop me and buy one" and "PLEEZ! Watch that child"?

Can't wait till part 2 rolls around!

Are you sure you want to delete this comment?
I sure loved ice cream since I can't remember when. The most memorable ice cream moments for me were when we went to the Graeter's in Upper Arlington, or when we bought Eskimo Pies and Klondike bars/sandwiches.
I tried Push-Ups once, but they were WAAAAY too messy to my liking. And, oh, who could forget that "Otter Pops"-type treat, Fla-Vor-Ice?

In fact, I can still hear the strains of either "Turkey in the Straw", "The Entertainer" or "Pop Goes the Weasel" when the truck zooms down the Clintonville streets some summer days... and who could ever forget those immortal phrases: "Stop me and buy one" and "PLEEZ! Watch that child"?

i was never a fan of push pops... they were just too messy for me...

those and Big Sticks... i hope those show up in a later article... it would be a shame to leave them out...

my ice cream man had a 7up flavored double popsicle... THOSE were goodness!
Are you sure you want to delete this comment?
good article!

i was never a fan of push pops... they were just too messy for me...

those and Big Sticks... i hope those show up in a later article... it would be a shame to leave them out...