Entertainment execs and their effed up imaginations ran rampant in the 80's. Could no one save us?
By geoffreydean
On
Firstly I'd like to say that most of the stuff you see on TV these days has been so homogenized that very little about it is actually stimulating. There's nothing on TV to inspire the imagination, tickle the funny bone, and yes, even traumatize like there was in the 80's.

Without further ado, things that scared me shite-less in the 80's:

10) Less scary than most of the stuff on here but still with an amazing creep factor were the enormous animatronic characters of "Chuck E. Cheese" fame. I grew up in Portland, Oregon and on multiple occasions one of the characters would get an eye stuck and it would flutter disturbingly throughout the loud stage show in the main dining area. The shifty eyes, piston hisses and ability to crawl beneath the stage and hear the gears grinding as the drag-queen-looking Helen Henny clucked and whirred was enough to put a birthday group of friends and I off pizza for the night. We were so disturbed that we didn't go into the parlor for the rest of the evening and stayed out in the main play area, where we were safe from the evil robots. The updated versions today are more sassy and r&b driven, especially Helen who I remember as sounding more like Mrs. Miller than the Whitney Houston thing she has going on now. 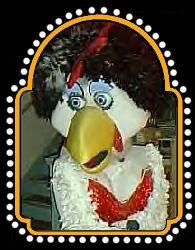 Pasqually was about as offensive as an Olive Garden commercial 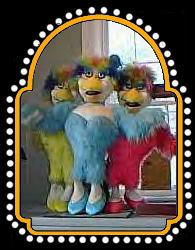 9) Watcher in the Woods- What in the hell was Disney thinking? They've got several movies and shows on this list but I had to get Watcher up here. This movie was made the year I was born, but I had the distinct displeasure of seeing it when I was about 8. It scared me SO BAD that I wouldn't look in a mirror or a window for about a month, which made it really difficult to come my hair or see outside. I think it's probably the combination of the little girl getting posessed, Bette Davis' crazy eyes, Karen's blindfolded figure and Lynn-Holly Johnsons' terrible haircut that pushed me over the edge on this one. Upon giving it another watch through now it's not so bad, but you can see how a kid could get easily freaked out by the confusing plotline and eerie "stalker style" camerawork.

I think Bette is looking straight into our souls. Eww.
8) Earning spot number eight- Through the Looking Glass. This was a live-action 80's TV movie about the second book in the Alice series (although, like the Disney movie, there's some plot cross over with Alice in Wonderland). The frights begin when Alice enters the Duchess' house, and grabs a rather ugly, screaming baby which turns out to be a pig. Yuck. But the fun doesn't stop at shrieking pig babies...oh no. Alice then goes through Wonderland, encountering all kinds of fun things until she runs across the White Queen, played insanely by the mentally disturbed if not homicidally inclined Carol Channing. Carol talks to Alice about jam (jam yesterday, jam tomorrow but never ever jam today!) and then tries to show Alice a broach she got. On removing her broach, White Queen pricks her white gloved finger, which begins to bleed. For some reason or another, she shows the finger to Alice, repeating that it's bleeding, finally echoing over and over in her trademark creeky man-voice: "blood, blooooood, bloooooooood, bloooooooooood". Then, as if that weren't enough, ol' Alice ends up opening a present from the fussy Red Queen which turns out to be the frightening Jabberwocky which towers at least 2 stories above poor Alice. All I can say is thank the lawd we taped over this. Just as an aside...the monstrously bizarre "Alice" which came out in '88 from Europe is about 100 times more disturbing, but I never saw it until I was grown. Give it a watch. 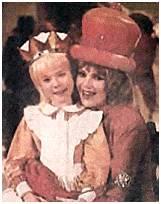 
7) Back again to Disney we have the Mr. Boogedy series, which also gave me nightmares. This was a part of the otherwise enjoyable "Sunday Night Movie" series on ABC. Shown during Halloween, Mr. Boogedy haunted the house of a family in a strange town. It doesn't sound terribly frightening, but the make-up on Boogedy was overly grotesque, and the recurring theme of posession ends up in the Boogedy series as well ("Boogedy, BOOOOOGEDY!) 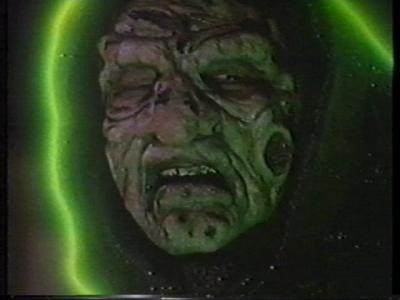 
6) I think it's about time to mention the Care Bear movies. While not overtly frightening, the bad guys in these movies were pretty over the top(I'm speaking specifically of The Care Bears Movie and Care Bears in Wonderland). In the Care Bears Movie, a little boy working as a magician's assistant in an amusment park is tricked into reviving an evil force simply called "The Spirit". Not so simple is the fact that the spirit is a glowing green face inside of a book, that talks to the boy (Nicholas) and gets him to do awful things. I remember nearly soiling myself upon hearing her screaming at him as he tries to banish her at the end. Recently I had the opportunity to watch Care Bears in Wonderland again. I had many good memories of that movie and didn't remember anything scary about it at all until I saw the song "Wouldn't it be Wonderful if Wonderland...?" where the main villain (A bizarrely outfitted chessboard Wizard)sings of the demise of all the fun and craziness in Wonderland. However, in the middle of the song he gets into this sort of frenzy and lightning erupts overhead, casting his face into shadow. We rewound it and watched it again in slow motion and the face he makes is horrifying. His teeth go sharp and jagged, he gets a serpent tongue, he looks totally messed up. We all just sat there (we being a group of twentysomethings) and went "how could they show this to kids?" How indeed. 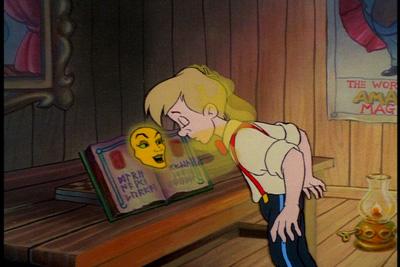 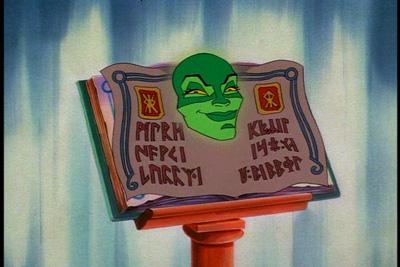 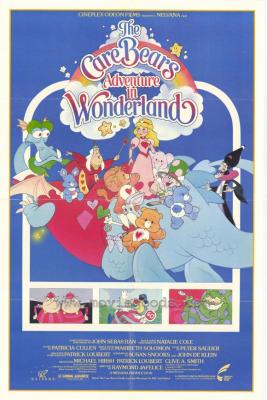 The Wizard is the jackass in black on the right

To be continued...
3
Login To Vote!
More Articles From geoffreydean

13
Quote O' Matic
Lilith: "Psychologists believe that the brain doesn't stop maturing until we're well into our twenties. So what does that mean for a girl who's turned 18? Legally, she's an adult, yet she still has a brain that's... well, let's just say a brain that's not fully cooked. I guess that's why you can say we go away to college. It's like an incubator. A place to keep our bodies safe and our brains baking. Until we're able to make informed intelligent choices."
Added By: CardassiaPrime
Femme Fatales
An unhandled error has occurred. Reload Dismiss