The NES unites us and the hype surrounding it is the stuff of 8-bit dreams.
By Hoju_Koolander
On If there is one unifying point between all members of my generation (let’s say folks born between ‘80-‘85) it’s the Nintendo Entertainment System or NES. No matter what the social situation, if I mention the word Nintendo, I’ve got an instant bond with people. Even my wife, who spent most of her childhood reading books (huh?) and playing outside (what?) enthusiastically shares tales of conquering Super Mario Bros. 3 by passing off the controller between siblings until the Koopalings were no more. 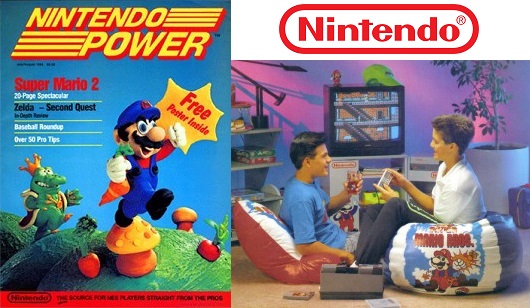 It was more than a form of entertainment, it was a pop culture milestone that has been redefined with each passing decade. Being born in ’82 and the NES getting its North American release in 1985, it’s something that was always there for me and has so many childhood memories attached to it. I know you’ve got ‘em too, so let’s start playing with power!

The day I got my Nintendo was 50-50 split between excitement and confusion. See my brother is 17 years older than me and had experienced the Atari 2600 in all its “glory” during his teenage years. So just imagine his excitement when this 8-bit gaming system with graphics that actually looked like the things they were supposed to represent appeared under the Christmas tree in 1988. It may have had my name on it, but my brother knew I couldn’t truly understand the sheer awesomeness that was about to be unleashed in our home. Frankly, all I cared about at the time was the fact that the system came with guns that clicked when you pulled the trigger. Little boys like guns. 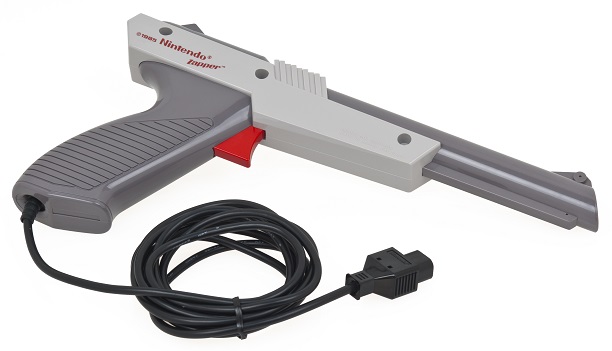 Like some kind of special forces operative assembling a sniper rifle, my brother and brother-in-law hooked up the NES to our ancient TV and popped in the Super Mario Bros./Duck Hunt cartridge. I will say, there was something magical about getting 2 games in one, even if Duck Hunt was pretty much a tag along. In case you were wondering, yes, that's the back of young Hoju's head and the satisfied face of my older brother from Christmas morning '88. Soon I was watching Mario stomp flying turtles and dodge Bowser’s flaming belches in a castle where the Princess surely wasn’t. I remember asking the classic, “Is it my turn yet?” on the level where you jump from one “toadstooly” platform to another. After dooming Mario to what I always assumed was death by spikes that were waiting just below the screen, I passed the controller over to my brother-in-law. Then another cartridge found its way into the machine… 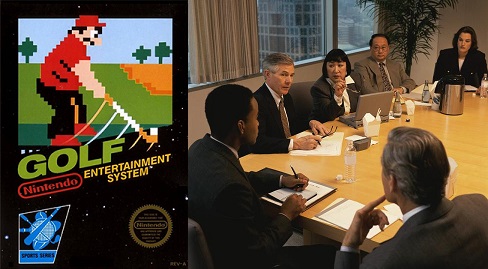 GOLF?! Seriously, GOLF? I’m not even mad that some parent or relative bought this thinking a kindergartner would want to play it, I’m furious at Nintendo for letting this get past their brainstorming meeting. I mean how did that go, “Let’s see, kids like video games. What else do kids like? Dragons, Machine Guns, wait, I’ve got it, GOLF!” Look, a case could be made that Caddyshack was a big hit a few years prior and if it was themed after Happy Gilmore a few years later I would have let it pass, but this was literally just called Golf and featured what I always considered to be a “human-sized” Mario whacking away at balls (yep, totally went there). This wouldn’t be the first disappointment in a Nintendo game cartridge, but it was for sure the most quickly discarded.

As Nintendo’s influence began to spread, the marketing and tie-in promotions were often more exciting to me than the games themselves. I remember Nintendo Game Pack trading/game cards showing up at the impulse buy counters of drug stores around this time. With their bright yellow packaging, who could resist picking up a few?

Now theoretically you were buying a pack of these things to play the “game”, which consisted of a scratcher card where you couldn’t win anything but an empty victory. For real, you would scratch away the likely carcinogenic silver circles and if you got the right combination you won…NOTHING! Come on Nintendo, you couldn’t come up with a “Win A Date with Samus Aran” sweepstakes where each winning card counted as an entry? At least offer a subscription to Nintendo Power magazine for every 100 winning cards. Cheapskates. 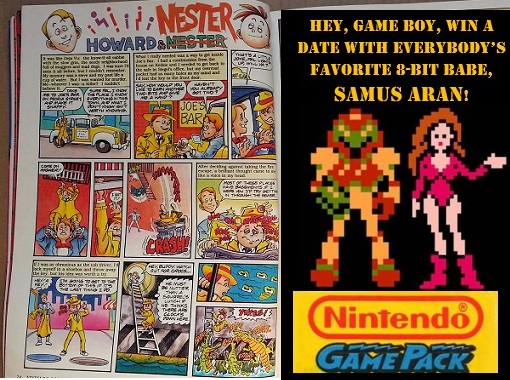 Pointless scratchers aside, the real draw of the Game Packs were the stickers of video game icons like Billy Lee from Double Dragon or King Hippo from Mike Tyson’s Punch-Out (Super Macho Man and Mr. Dream can kiss my grits, Iron Mike is the true king of the ring!). These things were awesome and made the perfect decals to adorn your Control Deck or Trapper Keeper. In fact, when I bought an NES control deck during my most recent nostalgia binge, I made sure to buy a couple Game Packs as well so that it could be properly decorated. One of the other items I always found cool were the Nintendo themed food stuffs. Just a year after I got my NES, those wizards at Nintendo had already moved into the world of handheld electronics with the Game Boy. The arrival of a game system you could fit in your fanny pack had to be announced somehow and one way they decided to spread the word was with Game Boy Gum. 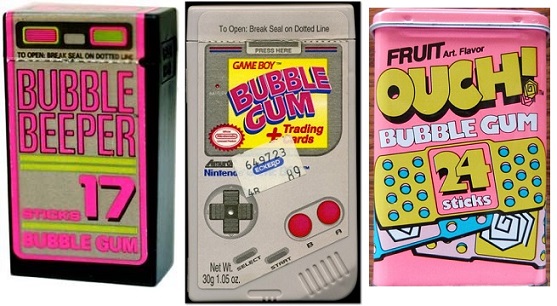 Borrowing a concept from the equally awesome Bubble Beeper and Ouch! Gum packs, these smaller plastic replicas were filled with less than fantastic gum, but made up for it with secret tip cards for beating your favorite games. I wonder how many grandparents bought these things for their whiny grandchildren thinking they had made their dreams come true, only to find out this was not the talk of the schoolyard the kid had been bugging them about.

Also around this time, Nintendo themed fruit snacks started arriving on store shelves. I am an unabashed fan of fruit snacks and in my opinion they reached their peak with the fully 3-D sculpted Garfield themed treats. But that doesn't mean that Nintendo didn't give them a run for their money with Mario and Zelda crafted confections. 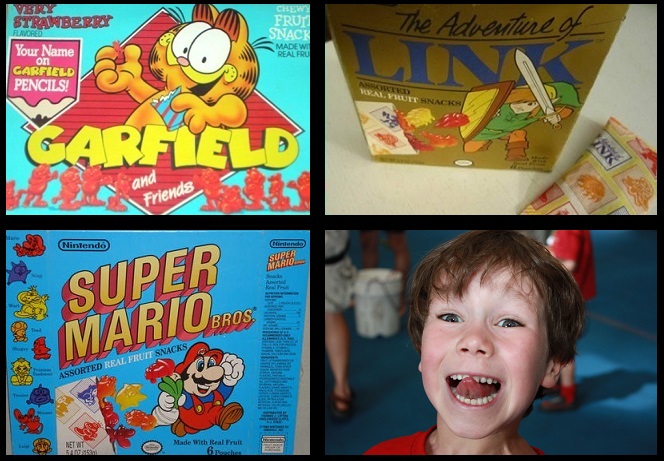 The gold box for The Adventure of Link fruit snacks is the clear winner here. Much like the game box and cartridge, the shininess made the item seem that much more desirable and tantrum worthy to a kid back in the day. Also, the fact that you were eating giant bugs and slime creatures was a major plus. I remember opening a package of these at a friend's house and feeling like he had just shared his secret stash with me, they were that amazing.

There's so much more I could talk about, but I think I can wrap it up here and leave room for a part 2 one of these days. You might notice, I've barely mentioned video games, you know, the "real" reason people liked Nintendo. The truth is, I was much more into the hype than the games, but it doesn't mean I didn't play my fair share of Contra, Bionic Commando and Marble Madness. You can check out some of my other articles for gaming memories. But how about the toys, clothes and marketing promotions, what do you guys remember?
28
Login To Vote!
More Articles From Hoju_Koolander Are you sure you want to delete this comment thread?
selfie
Provides multiple learning environment of International standard with holistic system of education at an affordable cost for the successful life of young generation.
[url=https://www.dpmc.in/department-of-hotel-management.html]Hotel Management college in Dehradun[/url]
[url=https://dpmc.in]Paramedical College india[/url]
[url=https://www.dpmc.in/doon-pg-college-of-agriculturescience-and-technology.html]Agriculture college in uttarakhand[/url]

Are you sure you want to delete this comment?
Provides multiple learning environment of International standard with holistic system of education at an affordable cost for the successful life of young generation.
[url=https://www.dpmc.in/department-of-hotel-management.html]Hotel Management college in Dehradun[/url]
[url=https://dpmc.in]Paramedical College india[/url]
[url=https://www.dpmc.in/doon-pg-college-of-agriculturescience-and-technology.html]Agriculture college in uttarakhand[/url]

Are you sure you want to delete this comment thread?
mb22
School believe in the individuality and unique identity of each child, and our educational philosophy is emphatic about providing a child-centric education through a unique curriculum.
[url=http://www.tsushisar.edu.in]Best play school in Hisar[/url]
[url=http://www.tsushisar.edu.in/school-overview.html]Popular school in Hisar[/url]

Are you sure you want to delete this comment?
School believe in the individuality and unique identity of each child, and our educational philosophy is emphatic about providing a child-centric education through a unique curriculum.
[url=http://www.tsushisar.edu.in]Best play school in Hisar[/url]
[url=http://www.tsushisar.edu.in/school-overview.html]Popular school in Hisar[/url]

Are you sure you want to delete this comment thread?
selfie
You did really good work. I really appreciate your new and different post. Please guys keep it up and share with us some unique post in the future…

Oh, look! Another Nintendo article. Eh, maybe it will be- oh, never mind, got the usual twenty or more likes as all Nintendo childhoods do.

That is all.
Are you sure you want to delete this comment?
I don't mean to be a jerk, but I'll just say it to get it off my chest:

Oh, look! Another Nintendo article. Eh, maybe it will be- oh, never mind, got the usual twenty or more likes as all Nintendo childhoods do.

I was in 4th grade when this system released. I envied all the kids on Nickelodeon's game show (can't recall name of it) that would win the NES system. I never got one until the 6th grade I think and yet back then I thought the Sega MS looked cooler with better graphics but much later realized NES had all the 3rd parties and best games.
Hoju_Koolander
Yeah, my babysitter's kids had a Sega Master System that I used to play when I went to their house each day after 1st grade. It seemed very exotic compared to the NES, but not as much fun.

This is the largest version of that pic I know of http://www.voletic.com/wp-content/uploads/2014/08/nintendo1.jpg
Are you sure you want to delete this comment?
Yeah, my babysitter's kids had a Sega Master System that I used to play when I went to their house each day after 1st grade. It seemed very exotic compared to the NES, but not as much fun.