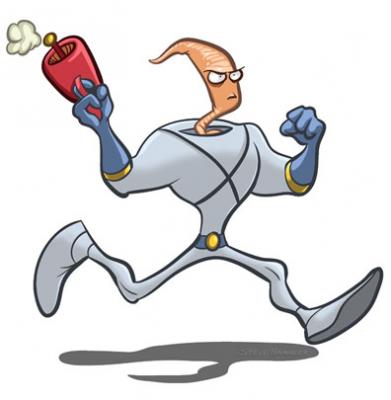 he was just an ordinary earth worm, crawlin around eatin dirt, poopin dirt. His life was soon changed for ever, when he got into the Ultra-high-tech-indestructible-super-space-cyber-suit, making him...earth worm jim in a Ultra-high-tech-indestructible-super-space-cyber-suit, flying around with snot, and Peter Puppy, fighting off retardly funny villians such as Professor Monkey-For-A-Head, or Bob the Killer Goldfish. everything about him was awesome. GRROOVY! 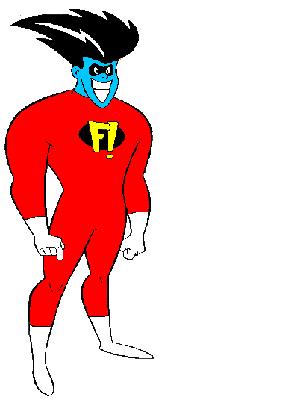 this guy is insane. Literally. Dexter Douglas was just your average teenage computer geek, when all of a suden while upgrading his computer with a chip, he got sucked in giving him the knowledge of everything on the world wide web, and giving him super strenght and speed. he would zip around town chasing his enemies, sticking his arms out, and making sound efects as if he was flying. He was also blue. and every one knows that blue is cool.

You all no the mask. But im not takin about the animated series, or the movies(by the way the second one was a total lump of shit) im talkin about the comic book character the mask.you got your hopeless loser Stanley Ipkiss shops for a gift to give to his girlfriend, Kathy. looking around he finds a mask that starts talkin to him (If some maks started talkin to me I would really shit my pants and run away), tells him to put it on. So of coarse he does. He Transforms into a insane, green headed, huge teethed(that a word?) super human. Using his new super powers he takes revenge on those who treated him like crap in the past. He also has the coolest name to. Big head. 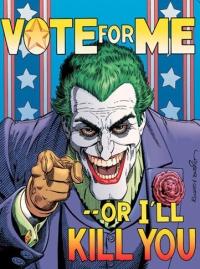 from this list so far you can see alot of these guys are crazy. But not as crazy as this fellow. In either the comics, or the animated show, the joker has always been the main arch enemy to batman. He's a criminal master mind, and mass murderer.Anythings a joke to him, even human lives. youve gotta have some bleached balls, and green pubes to do half the shit he does. I mean gettin thrown into a pit of chemicals and changing your physical apearence to make you look like a insane ronald mc donald has gotta piss you off to right? its all batmans fault.
5- 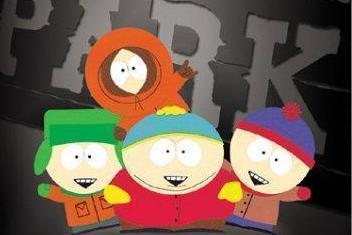 Ok from this picture, can you guess what character is the coolest? If you said cart man...you are wrong. so wrong. its not kyle either, even though we share the same names. Its not stan either. Yep its Kenny, the poor kid on the street, who always dies in the coolest ways. you bastards. He may be the quite one, but if you can ever make out what his muffled voice says, its always something funny. he also knows what a dirty word means sometimes if the other boys dont. like fingerbang. 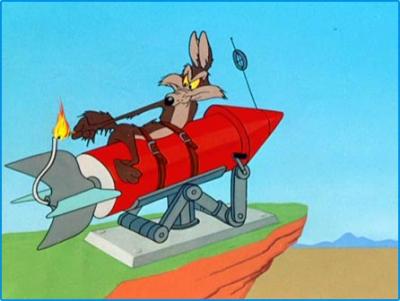 the poor bastard wile coyote. he tries so hard to kill that stupid road runner. But he always ends up nearly killing himself. Yes this one animal has taken more pain then any one man or animal on this planet can endure. 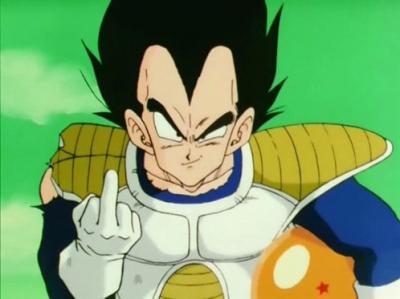 yes vegeta is cool. we all no that. The saiyen prince from the planet Vegeta was sent to earth after his planet was destroyed to hunt down goku, and after one of the most epic battles in history, goku spares his life, being the good guy he is. later some enemies become friends and freinds become enemies yada yada yada. this guy is just bad ass. 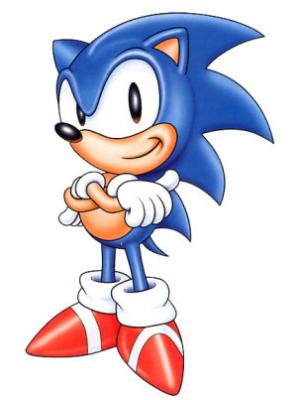 It was hard to choose between mario or sonic. Both had good games, and both had good tv shows. Looks like sonic wins. i mean he taught me about sexual harasment. 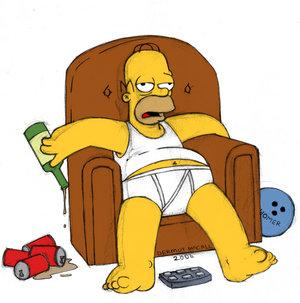 No words need to be spoken. he is just so stupid its funy and so funy its stupid.

Well thats my top ten in no particular order. although homer is 1st either way. only time will tell if this list will change. Sure there are lots more that could have been added, but to me these guys were the greatest.
-12
Login To Vote!
More Articles From kylewhite

10
kylewhite
Remebering crazy bones
Crazy bones were one of the greatest toys ever. But like all fads, dissapeared.