Crazy bones were one of the greatest toys ever. But like all fads, dissapeared.
By kylewhite
On
There is always fads. Most popular today may be yu gi oh, pokemon, Bey blades all of which suck compared to the greatness of crazy bones. 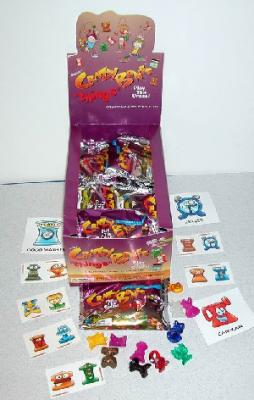 crazy bones was a wildly popular toy fad in the 90's . They were tiny little pieces of plastic...things that were in the shapes of bones and were either animals, living people or inanimate objects with funny faces on them. here are a few. 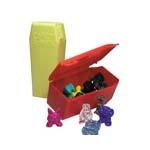 and trade for te ones we dident have. There were also lots of games to play with them as well, such as;
Traditional game: Player tosses a Crazy Bone into the air. Points are scored depending on which side it lands on, with less likely sides (for example, landing straight up, or upside down) receiving more points.
Battle: Two players arrange their Crazy Bones in parallel rows a distance apart. Players take turns trying to knock their opponent's Crazy Bones out of the row. This is often the most popular game for school crazes as it can be played quickly and easily without much need to set up and without such a high chance of Crazy Bones being stolen.
The Bomber: Players take turns throwing a single Crazy Bone into a circle containing all player's Crazy Bones, attempting to remove them from the circle.
Airborne: Throw your bone as high as you can being able to still catch it.
Basket: Players try to get their Crazy Bones into a shoebox by bouncing it against the floor and into the box.
Wall: Flip a coin to decide who goes first. The person who goes first rolls, not throws, a Crazy Bone towards the wall. The person with the Crazy Bone closest to the wall wins.
We would always play battle and wall, but of course as kids we were dumb. We would play for keeps and when ever the poor kid lost all his crazy bones, he would ask his parents for knew ones. Of course the parents would complain to the principle so we ended up having a ban at my school from crazy bones. That didn't stop us though. Me and my friends and other kids it didn't matter who, we would get together after school and spend hours on end playing.
Maybe a year or so after they seemed a bit stale. It was time for the next best thing. New games had been made like take the hammer to the crazy bones, or throw the crazy bones on the road and see if they get hit by cars. It was then that Mcdonalds came to save the day, by making thier own brand of crazy bones. 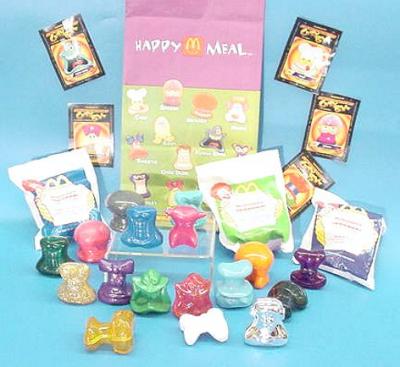 of coarse they werent as good as the original, they were all to big and dident resemble the regular brand. This resparked my love for crazy bones. I felt I was living with a lie with those fakes. I had to get more. I Kicked myself because the next day at school the next best thing was out and of course I had no money because I spent it all on my crazy bones. Thats fads for yeah.
I still have all my crazy bones and even though I have grown out of playing with toys, I still find them enjoyable. Im sorry for the lack of pictures, but it was kind of hard since it was one thing. Also if you wish to give it a thumbs down its okay. I simply wished to write this to see if anybody else would go Hey I remeber those!
Any way my next article willl be better.
10
Login To Vote!
More Articles From kylewhite