With a City UnderSeige, Why Does Spider-Man Waste His Time With This Guy?
By ChicagoSheriff
On
In the eighties during grammar school we were given a comic book featuring our favorite webslinger Spider-Man. Little did we know that it was a ploy to try and teach us not to smoke, but okay it was still a comic book. So who does Spidey fight? The Hobgoblin? Dr. Octopus? Or any number of famous villains we loved to hate? No, he teams up with X-men's Storm and some dork named Power Man to fight SmokeScreen, a guy who smokes and runs a sports betting operation, thats it. 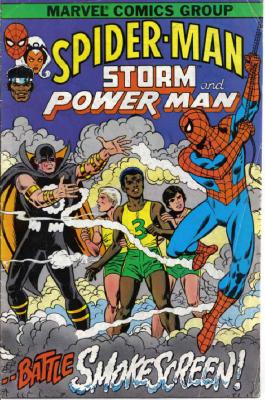 This action packed thrill ride starts off with a race. Some kid who is really fast can't finish the race because someone gave him some cigarettes. So, Powerman feels he's gotta look into it. While he's spying on them Spider-Man Show up and is all in Powermans face about following kids around, which is actually kinda funny when you see it. 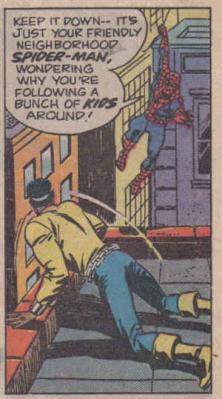 Well I could probably devote an entire article as to why Powerman was following kids around but, back to the task at hand. So Spider-man and Powerman meet up with Storm, of all people, and decide that they have got to stop whoever is smoking with these kids. Enter Smokescreen. 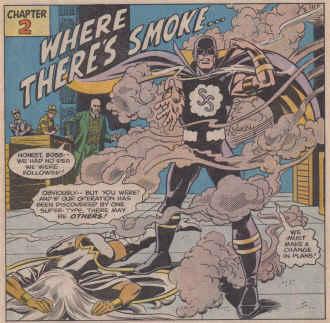 Now, as you can see by the frame above Storm gets beat up in about five seconds by Smoke and his goons. SmokeScreen uses his power, you guessed it cigarette smoke. So While all this is goin on Spidey and Powerman decide to go research smoking, and after a few pages they realize that storm never came back, and she must be being held in SmokeScreens lair. Which, as I mentioned before is a sports betting joint. I cant help but think that with all the villains running around the Big Appple Spider-man could have left this guy up to the local police. I mean his only power is cigarette smoke and since most cops smoke anyway its no big deal for them.

At this point in the story, the kid who lost the race is asked by SmokeScreens goons to throw a race so that they can make a clean up by betting against him. Now why people would wanna bet on a race between some kids is beyond me, but thats why im not a super-villian, you've got to look at the big picture. Spidey and Ughhhh Powerman bust in and beat up the goons, but they came for the man behind the evil plot and he's nowhere to be found. After Storm escapes she tells her counter parts where SmokeScreen is hiding, which leads us to another superhero busting through a wall scene. 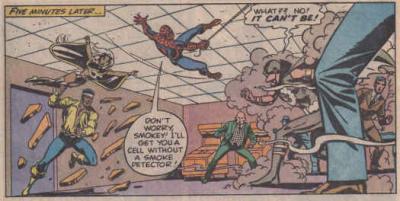 It turns out Spider-man kicks the crap out of SmokeScreen in one frame because, as he lets us know, he is wearing a oxygen filter under his mask, and SmokeScreen is a chump. Then The super hero's talk all the kids into quitting smoking and toot their horn a little bit. 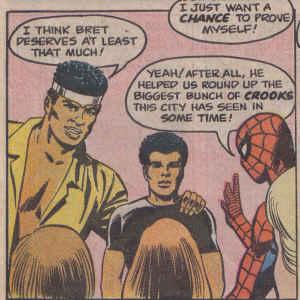 The biggest crooks the citys seen? Isnt that a little ridiculous, seeing as that city has seen nearly every villain with actual powers and actual plans that Marvel has had to offer? But the American Cancer Society would have us believe a dude who bets on races and smokes is the worst villain around. As I finish my cigarette and can't help but think, didnt Spider-Man have anything better to do?
11
Login To Vote!
More Articles From ChicagoSheriff