The Art of War: Volume III

My Favorite SNES power-ups, attacks and weapons.
By Riphard
On
Super Nintendo[/size][/u]

No video game is complete without the assistance of

unique and increase the "fun factor". These are a few

of my most memorable, in no particular order.

"Red Yoshi" was just one of the many incarnations of the jurassic mario sidekick. The blue and yellow versions were cool, but nothing beats spitting three fireballs via koopa shell. 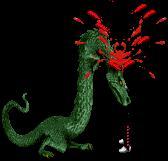 I loved using "Reptile" in MKII. His invisibility and acid spit were wicked attacks. However, thinking back to that game, the first true memorable attack for me was the "dragon morph" fatality by "Liu Kang". Gotta love the violence. "Baraka" fans may now revolt. 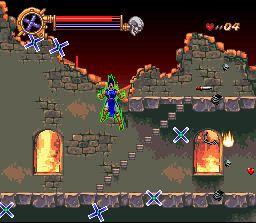 Taking some cues from the "PC-Engine" version (minus the use of "Marie"), "Dracula X" was a fairly decent "Castlevania" port. The "item crash" attack was the shit. Using your magic bar you could max out your item, (whether it be a cross, dagger, holy water, etc.) for a deadly full screen assault. Each port had different interpretations per "item crash". The "PC-Engine", "Sega" and "Sony" had the best in all of their differing "Castlevania" games. This trend would continue into the classic "Symphony of the Night". 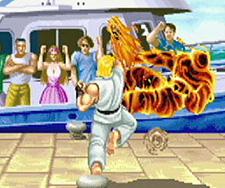 With the last installment of the "Street Fighter II" era, "SSFTII" began slowly using the combo system (ultimately ending with "SSFII Turbo") in their games. No longer were "super moves" 1-2 hits.......now, they could be chained with other attacks for multiple hits. Leading to my favorite "Ken", with his flaming "shoryuken". This version traveled out more than up, and if properly executed, could put serious punishment on the opposition. 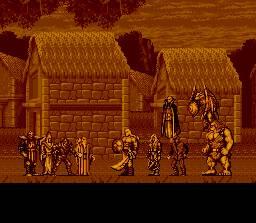 "Capcom" just puts out great titles. Like "Magic Sword" for example. As a sword weilding warrior you traverse through a tower and its many levels with the help of friends you rescue along the way. There was a Ninja, Thief, Barbarian, Knight, etc.......each with their own special uses and attacks. I liked the "Lizardman". He was a flying red reptile that was pretty strong with his attacks.

Legend of Zelda: A Link to the Past

"Your sword in stronger!"
"You can feel its power throbbing in your hand!

The gayest SNES line ever. Hahahaha! The "golden sword" is the strongest in the game and a definite must (with the silver arrows) in order to beat "Gannon". All you do is throw your sword in the water fountain and it turns into something better. I once drove my "Toyota Celica" into the water hoping for a "Supra" upgrade........all I got was a "Tercel" and a ticket. 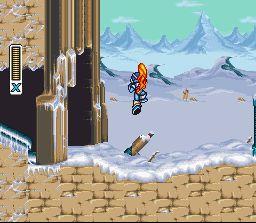 Expanding on the "Hadouken" power-up from "Mega Man X", this sequel took some more cues from that "Capcom" classic. The "dragon punch" weapon is obviously another "Street Fighter" homage, however it proves quite necessary in order to beat the later bosses. Executed the same as "Ken Masters" you do a rising flame uppercut, only this time as a tiny blue robot. SHORYUKEN!! 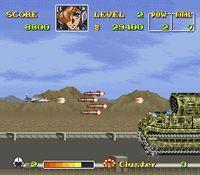 I like the bomb upgrade called "Falcon". It is a more powerful version of the conventional explosive but skims the ground until initial contact. The homing missles are pretty sweet too........wait.......actually every weapon is awesome! This game is tied with the NEC's "Blazing Lazers" as my all time favorite shooter. Killing Nazis is fun. The "gatling gun" provided me with endless hours of violence and satisfaction. It is a must, unless you want to stab the Germans to death.........which can be fun, albeit slow. I can hear their screams now, "arghhhhhh!" 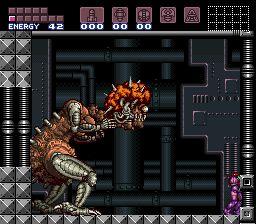 This glitch weapon called the "murderbeam" makes "Mother Brain" very simple. Without too much explanation, you equip "Samus" with a combination of beams, which in turn causes the game to make a glitched attack. If you know what I mean you are smiling right now. Sometimes the glitch can even screw your game up. Proceed with caution. Check "YouTube" for videos if you are lost. A sweet weapon for sure! 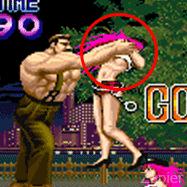 "Haggar's" plethora of wrestling attacks were really fun in "Final Fight". However, his "flying pile driver" was a very formidable weapon. Don't get me wrong, I like "Guy" and "Cody"..........but nothing beats grabbing the enemy and inflicting mass damage "Zangief" style. This simple "3-D throw attack" helps make "Turtles in Time" one of the best "TMNT" adaptions on any console. Taking cues from the arcade, this version was loads better than "Hyperstone Heist" for "Sega". There is no debating the facts.........check it out for some fun two player madness.

"Fulgore's" "no mercy" always sticks out to me anytime "Killer Instinct" pops up in random conversation. A simple laser beam turning opponents into ash. What's not to like? It's not my personal favorite attack but quite memorable. "Jago" was my homeboy! 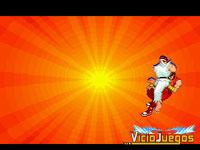 "Ryu's" super combo "vacuum hurricane kick" was by far my favorite super attack in "Street Fighter Alpha II". The"Shinkuu Tatsumaki Senpuukyaku" was a stationary hurricane kick that created a vacuum-like suction that would draw in near by opponents for a swift butt kicking! Only "Akuma's" "Raging Demon" was sweeter!

Other than the spiked shell, the "lightning power-up" proved to be the best weapon in "Mario Kart". When executed all the drivers shrink in size and decrease in speed. Why am I even explaining this? Who hasn't played this game?? 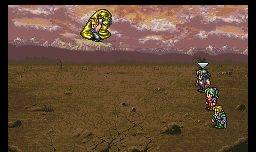 So many cool attacks. I don't have a personal favorite but my cousin would be pissed if I did not mention his most memorable........the "Saban suplex" from Final Fantasy III or VI for SNES. This should start some RPG discussion. 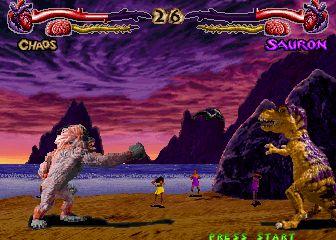 The "Fart of Fury" attack from "Chaos" was allowed to remain in the SNES version. Although the "acidic urine fatality" had to be axed because of some over-protective mommy. What a shame. Who doesn't like apes with potty problems?


I hope you enjoyed this new series.

Are you sure you want to delete this comment?
This was loads of fun to read!