Here's an article about a restaurant that time forgot.
By dalmatianlover
On
Okay, first off, a lot of you may not know what I'm talking about here. Well, let me take you back to the time of my childhood, and that was the 80's and 90's. There was once a local restaurant around where I lived called Bullwinkle's. 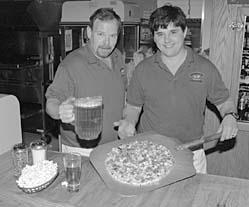 To start things off, this restaurant was based off the famous Rocky & Bullwinkle cartoon. The restaurant was kind of cool. It was designed to look like a log cabin. Although, it was kind of hard to get out of your chair. We used to order from small menus when ordering our food here. The main fare of what we'd get would usually be a pizza, a couple of pitchers of soda, and the snowshoe fries. This restaurant is what first introduced me to snowshoe fries. I always remember this place whenever I order those kinds of fries at Carl's Jr. 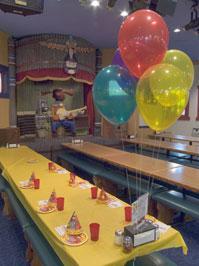 The restaurant section also had some live entertainment. There was a main stage theatre with a red curtain. Every 15 or 30 minutes there would be a show that featured animatronics of Rocky and Bullwinkle, and above the curtain would be smaller animatronic faces of Boris and Natasha. 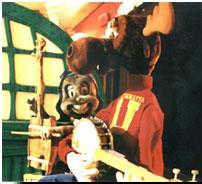 This is my wasted childhood that you're looking at right now. A show that makes no sense and is a total rip-off of the Country Bear Jamboree. Still, this is one of the very few places I know outside of the Disney theme parks that uses audio-animatronics. 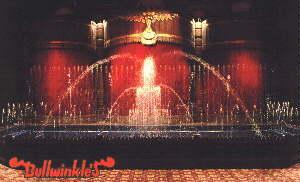 In addition to the animatronic show, there was also a water-works show. The water fountain show had some laser lights mixed in to give off some cooler effects. Now that's epic!

Bullwinkle's also had a token opperated arcade. I remember the arcade being really dark and noisy, though I don't recall doing so hot on the games. Some of the games included popular video games and games like Skee Ball, which gave you tickets that could be turned in for a prize. Sounds like a rip-off of Chuck E. Cheese's. In the late 90's, Bullwinkle's Restaurants started this thing where kids could turn in their report cards and get free tokens for every good grade that they earned (2 tokens for every A and 1 token for every B). This happened the same time Chuck E. Cheese's did the same thing. Smells like another rip-off. I guess they were trying to keep the restaurant in business that way. 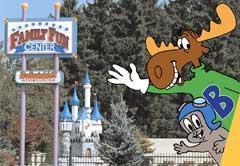 In the early 2000's, Bullwinkle's unexpectedly closed down due to financial trouble. There are still a few restraurants still open in other areas in America, but I'm referring to the one I used to go to in Santa Clara, California (but I think the Family Fun Center is still there). As of 2003, that building is now occupied by a nightclub known as Boomers, which I don't know very much about and probably will check out sometime.
So anyway, I just wanted to share this rare and obscure memory of my childhood. Kinda sucks that it's not around anymore and that Chuck E. Cheese's is more popular. But hey, I still got the Rocky & Bullwinkle movie to make up for it.
17
Login To Vote!
More Articles From dalmatianlover

-33
dalmatianlover
Special Article Review
A special recap of all my past Retrojunk articles.

26
MrCleveland
16 Characters who get Shafted
Many Cartoons get short-ended, but most get 'em more
An unhandled error has occurred. Reload Dismiss