Some of the greatest movies ever, as far as comedies, are owed to the man who asked a stranger to crash at his house and make a sandwich.
By System
On 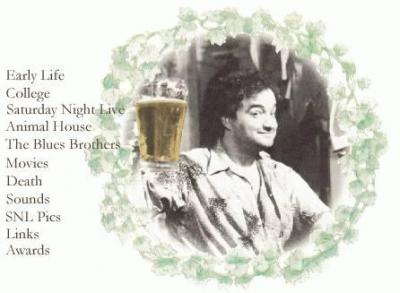 John Belushi, the man who would've been king, is considered by Hollywood as the greatest comedian to have ever lived. i mean, you have to be someone in order to sing "shake a tail feather" with Ray Charles.

John Belushi was born in 1949 in the quaint state of...Illinois! Chicago...hmmph...anyways, he was very popular in high school, graduating from Wheaton central. apparently, he had a thing for acting, in one of his first features, he was on a variety show playing as a Nazi camp counselor. Need I say more? Wait a minute, John wasn't Aryan, was he? I wonder how that would've worked out, "if you would like to be on the show 'Hitler', please call 1-800-fraggen gutschen mein freeggin kampf on breegen bracchin!" well, thanks to Judith Jacklin, we had a star. he went on to marry that girl. i think it would be sweet to be married to John Belushi. . .not that I am gay. . .not like there’s anything wrong with that. . .shutup!In February of 1971, John went to Chicago to audition for the Second City Comedy Troupe. He played many different characters ranging from the mayor of Chicago to Hamlet. As John would say as Hamlet:

he also went on to work for National Lampoon magazine, in 1972, which, I hope, answers ALOT of questions. well, it did for me. while doing lemming's for the magazine, he met a young fella who was a great actor and made 40 movies that stunk. yes, you've guessed it, CHEVY CHASE! He also met a guy who could play a "Conehead" REAL good, Dan Akroyd. needless to say, he went on with Danny to make the greatest musical EVER: the blues brothers.

it is a well known fact that john was eccentric enough to ask strangers for stuff, but how about to crash at there house? while in the making of the blues brothers, during a time when they were on break, Dan and john went to party and got separated. The next day, during dress call, john was nowhere to be seen. they found him 5 blocks away at some poor guys house, half undressed, eating a homemade BLT. when asked, he said, "I needed a place to get over being wasted, so i asked this guy if i could crash." the guy said of course, knowing this guy that was incredibly funny. So the styled up all night and watched the good, the bad and the ugly. What a guy...

john made such memorable films such as animal house, the blues brothers, and appeared on Saturday Night Live before his life was tragically and accidentally taken away. I am sorry, did I say, "Accidentally"? I meant that he was dumb enough to mix cocaine and heroine together to give him respiratory failure. But, if by that, someone means, "accidentally", then I guess he’s right. Here is what happened: Dan and John spent one afternoon on the beach talking and the subject of their deaths came up. It was one of those conversations that good friends have sometimes. course, none of my friends have given me the ol' death talk, but, oh well. Anyways, they were listening to a tape by the Ventures "2000-pound bee." The song was full of hard sounding guitars and it was the kind of music that was popular in the 60's with just a touch of punk. Aykroyd had one favor to ask of John. "You got to promise me something, " Aykroyd said. "If I die before you do, you have to play this tape at my funeral....because its..." Dan laughs..."Wouldn't it be great to lay this noisy, heavy tape on a church full of people!"
"Sure," John replied, "and you do the same for me." He was serious.

John loved the night life. He loved to party, to be wild, and to make people laugh. The late 1970's and early 80's was filled with drug use in Hollywood. Everywhere you looked drugs were there. The producers, the directors, and the other actors all seemed to be using them. John was no exception.

March 5, 1982. It was just another night for John, he was in his Chateau Bungalow #3 with some friends working on a movie script. Tonight John decided he wanted something to take him further than he had ever been. John shot up a speed ball. The mixing of heroin and cocaine that night had a cumulative effect on the brain, slowing down John's breathing and finally causing complete respiratory failure.

Guess what happened? Dan played 200-pound bee at his funeral. the only people that didnt appreciate it was some old church ladies, but that was john's grand, evil master plan all along. makes me laugh!

so, in conclusion, john was cool, john is dead, but we can all look to Ray Charles...wait, he is dead too. NEVERMIND! hehe. . .never mind (rest in peace Ray, sorry).
1
Login To Vote!
More Articles From System

0
Quote O' Matic
Brain and Basket Ball Coach: "B: We need to build a francise that can dominate the universe so people everywhere will worship me as a hero and allow me to take over the world! :C: Thats exactly what Michael Jordon told me when he said he wanted to make Space Jam -Brain and Basket Ball Coach"
Added By: System
Pinky and the Brain
An unhandled error has occurred. Reload Dismiss