Can Mario and the gang save Santa from the evil Koopa Claus?
By Vertex
On 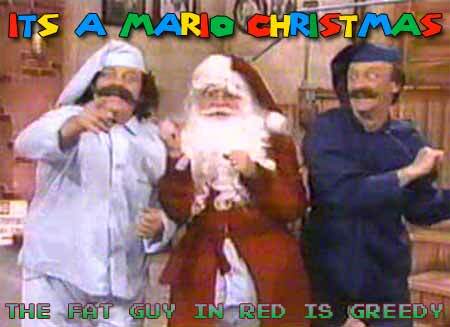 HEY Paisanos!! It wouldn't be Christmas without the Super Mario Brothers Super Show Christmas special. As with most of the cartoons that have live action intros it is more often than not the best part of the cartoon. Such was the case with the super show. If you don't remember the Super Show, they started each episode with a live action scene with Mario and Luigi accompanied by various guest stars. Most of the guest stars were washed up actors or people who have upcoming cartoons of their own and needed a chance to pimp their new product.

The cartoons were usually better than your average Saturday morning fair but in the end other than the live action intros there was not a whole lot that made it stick out above the crowd. But of course if you played Nintendo you couldn't miss an episode 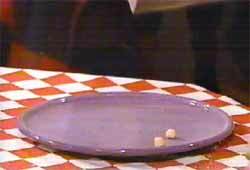 The live action segment starts with the destitute Mario and Luigi trying to make the best of Christmas by making due with what they have. When I say destitute I really do mean it. These guys can only afford two garbanzo beans for Christmas dinner. They really do need to look into something like food stamps, assisted living or maybe even getting a real job since this whole plumber thing seems to not be working out that great for them. It could be the fact that they are Italian and that they have too much pride to take handouts and would rather starve than stoop to that level…Nah; I think the real reason is that they are just two really stupid guys.

With no money they are forced to swap possessions. Luigi gives Mario his best pair of boots, while Mario gives Luigi his favorite wrench. While I guess this is sweet and all it just goes to show how close these two are to living on the street giving hand jobs for slices of stale bread and a warm place to sleep. 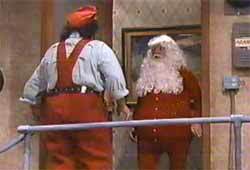 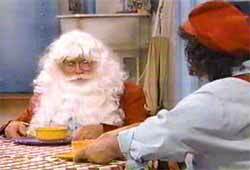 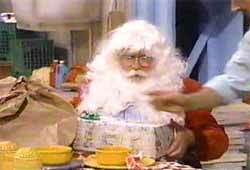 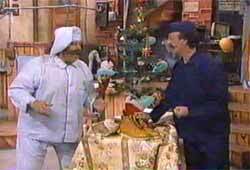 Once they have their presents under the tree and the two garbanzo beans cooked up they get a knock at the door. Who could this be you ask? It is the shows guest star, none other Saint Nick himself. Mario and Luigi being the dumbasses they are have no idea who just walked into their home. It seems that someone has stolen Santa's transportation and he needs to use the brothers phone to contact the police. Now the brothers may be dumb but they are certainly not rude so they invite Mr. Nick into their home. The fat bastard then proceeds to eat all their food and once midnight rolls around and it comes time to opening presents Santa is all too eager to take the brother's presents for his own without even a thank you.

When morning rolls around however the brothers awake to a surprise. Under the tree waiting for them are new boots and a wrench. Now if Santa really wanted to help them he could have at least given them something to eat. 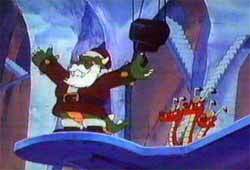 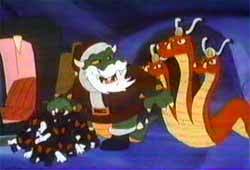 Now it's time for the cartoon segment of this fine article. This episode titled Koopa Claus shows what happens when King Koopa tries to stop Christmas. We begin with Koopa tossing toys into a crusher with almost orgasmic glee when Randolph the rednosed Triclyde informs Koopa that his sleigh is loaded with Bombs and Koopa sets off with ambitions of bombing Santa's workshop. 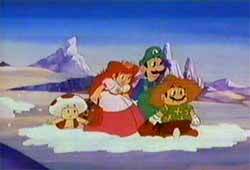 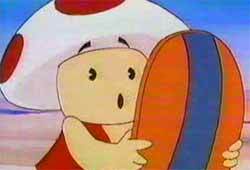 Now it's time for Mario to make his entrance. It seems that he, Luigi, Toad, and the Princess were on their way to spend their holiday in Hawaii and through a little misdirection by Toad they ended up in the North Pole. It turns out that it was Toads plan all along to and that Toad plans on hitting Santa up for a few presents. This is when we see Toads true side. He is one greedy motherfucker and all it seems he cares about are presents. So of course the princess indulges Toads rude behavior and gives Toad his present a little early. Without even a thank you Toad rips open the Princesses present which is a new snowboard and off he goes whizzing about on the snowboard. With this kind of negative reinforcement I don't see Toads attitude improving much but I guess dealing with Toad in this fashion is easier than actually doing the right thing and disciplining him or simply telling him no. I guess it's not really my place to tell the Princess how she should raise little Toad. 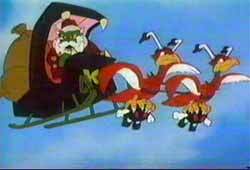 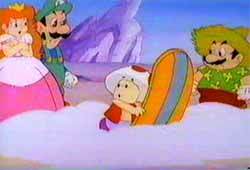 Then out of the blue Koopa appears above and begins bombarding Mario and the gang with his stash of bombs. It seems a bit strange to me that Koopa had no idea they were there but still managed to find them and did not seem the least bid surprised at finding them there. As the bombs send them all flying, all the greedy Toad can worry about is if his snowboard was damaged. Mario and the crew begin to put two and two together and figure out that Koopa is probably going to try and do something to Santa's workshop. Mario, Luigi and the Princess want to go save Santa but it seems all Toad is worried about is saving the toys. 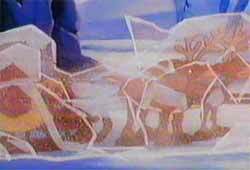 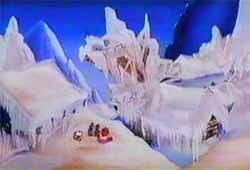 When the Mario crew arrives at Santa's workshop they find that everything has been frozen and that Koopa has taken Santa prisoner. It really does seem like Santa's workshop would have a few safeguards in place to prevent the freezing of everything seeing as how they ARE located in the north pole and all but I guess you don't have a lot of time for things like that when you have to work one night a year… 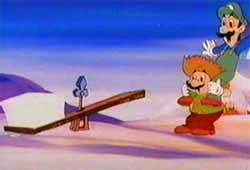 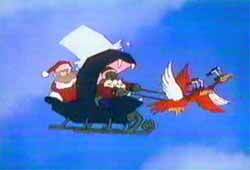 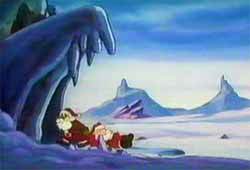 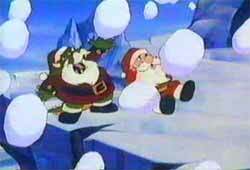 As Koopa flies away Mario has to think quickly. He tells Luigi to grab a block of ice and they proceed to very slowly set it on one side of a titter totter that just happened to be nearby. Then Mario has Luigi jump on the other end of the titter totter, sending the ice cube flying through the air knocking Koopa and Santa from the sleigh. All of this takes Mario and Luigi a good five minutes and by all accounts Koopa SHOULD have been a good mile away by the time they managed to shoot the ice cube into the air but their plan manages to succeeds to spite their bad timing. On the fall down Koopa uses Santa's bag as a parachute and manages to land safely. Koopa then makes a break for a cave that just happened to be near by. But when Mario and the gang decide to follow after Koopa, for some reason they slide down through the cave and are shot out the other end and off a cliff strait into a snow bank. Why did this not happen to Koopa you may ask. Good question but the cartoon feels they do not need to cover that so we move on. Koopa stands above Mario and company and explains his nefarious plans for Santa and at the end of his little speech he feels the need to yell bah humkoop as loud as he can. This of course starts an avalanche, Mario once again is forced to think quickly and uses his "plumbers snake" to lasso Santa and pull him to safety. Koopa is not so lucky and is forced to jump into the icy cold water below to save himself. 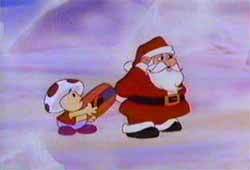 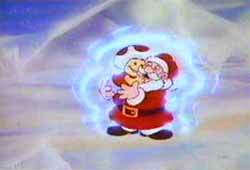 With Santa safe Mario, Toad, The Princess, and Luigi return to Santa's workshop only to find that it is still frozen solid and that it would not thaw in time for Christmas. When Toad sees that no other kids will get their presents the greedy little bastard's heart warm just a little and he decides that he will give Santa his snowboard and that Santa should give it to another boy. This causes the spirit of Christmas to radiate from Santa and begins melting the ice covering the workshop. After Toads selflessness thaws the workshop Christmas is saved and Santa invites the gang along with him as he makes his Christmas rounds. And everybody lives happily ever after. 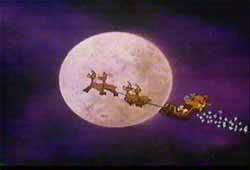 2
Quote O' Matic
Mousequeen: "The spell you broke on your head falls, you shall crack nuts, prince of the dolls. -Mousequeen"
The Nutcracker Prince